3. Access the constructor of the parent class (described earlier): Super (parameter list); It can only be placed in the first sentence of the constructor, and only one sentence can appear

2. When the member (property and method) in the subclass and the parent class have the same name, in order to access the member of the parent class, you must pass super. If there is no duplicate name, using super, this and direct access has the same effect (except that this and direct access are found from this class, and super is found from the parent class). The rules for calling the properties of a class have been described above. The rules for calling the methods of a class are the same, except that the properties are replaced by methods.

A subclass can indeed write a method exactly the same as the parent class. Although there will be a hidden danger prompt on the left, there is no problem with compilation.

Define a subclass Student, first test the calling method in the main method (must be invoked with declared variables):

Then continue testing in the subclass method, because this and super can not be invoked in the main method, so declare a test method to test this and super in this method.

Of course, the method still needs to be called with the variables declared in the main method.

Similarly, the most important point - when a subclass calls a method, if the subclass does not have the method, it will always look up. If the Object class is found but not found, it will report an error (super directly ignores this class). If a private method is found in the middle, even if there is the method above, it will not be found again, but an error will be reported directly.

3. If there are the same members in multiple parent classes, the access of super is based on the proximity principle.

4. The difference between super and this 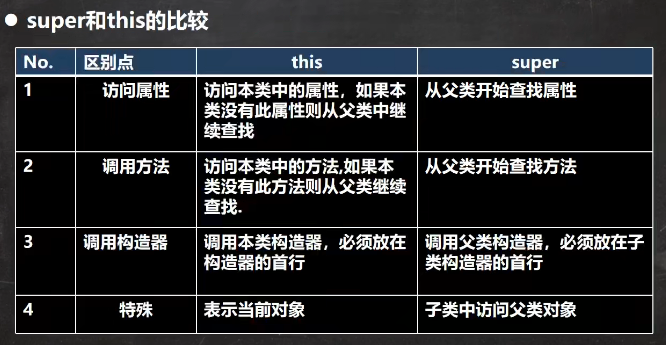 1. The formal parameter list of the subclass method, and the method name should be exactly the same as that of the parent class.

4. Comparison of overloading and rewriting