Program: tells the computer the data to operate and the instructions to execute. (data + instruction)
Time slice: the operating system divides time into many small time slices. One time slice is used by one program and the other time slice is used by another program. It switches between programs frequently. On the surface, it makes people feel that multiple programs can be executed at the same time.

Literal 100 is of type int, but when it does not exceed the byte value range, javac will automatically cast the type when compiling. short and char are similar

char
16 bits, 2 bytes, is a single Unicode character;
Char is essentially an unsigned positive integer with a fixed occupation of two bytes. It will be regarded as int during operation. The addition and subtraction of char is calculated according to its Unicode number, and the comparison of char type is the comparison of its Unicode number.
Example: char letter = 'A';
Escape character

boolean
There are only two values: true and false. The default value is false;
Example: boolean flag = true;

All except the basic data type are reference data types, such as String

Variable: a data container that stores data of a specified type. Declaring a variable will request a piece of memory space to store the specified type of data. Variables must be assigned before they can be used.

Memory: it can be understood as a continuous space with address numbers. Declare a variable, such as int age;, In fact, a space is allocated in memory to store int type data. Age points to the address of this memory space, and this memory space can be operated by operating the variable age.

Constant: a variable with only one assignment opportunity. When declaring, add the final keyword and the final data type NAME;

Comparison operator
It is generally used for conditional judgment

Logical operation method
It is generally used for conditional judgment

1) Modifiers: there are many modifiers for methods in Java, such as public, staic, private
2) Return value type: basic data type and reference data type. If there is no return value, the type is written as void
3) Method name: indicates the meaning of the method. The naming shall be in accordance with the naming specification of symbol identifier
4) Parameters: there are 0 to more. Each parameter consists of the data type and parameter name of the parameter. When defining a method, declaring parameters is actually defining variables (formal parameters). When calling a method, passing parameters is actually assigning values (arguments) to variables in the method.
5) Return value: the data type of the return value must be consistent with the declared return value type

Method overloading
In the same class, the method name is the same and the parameter list is different (number, type and type order).

Matching procedure for method calls
When a method is called, the parameters passed are required to match, but they are not required to be completely consistent, because javac will automatically perform type conversion when compiling and find the most matching method.

Recursive Method
Call your own methods. May cause memory overflow, use with caution.

Reference passing: the parameter is a reference data type. Modifying parameter (c) in the method may affect the incoming parameter (c1), because it points to the same heap space address. 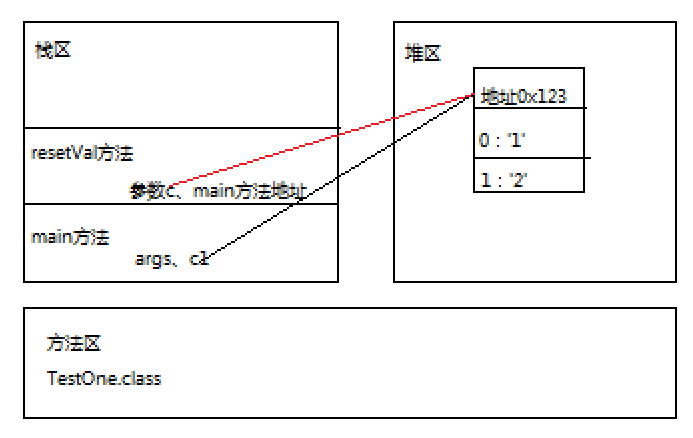 When calling a method, the method information will be loaded from the method area, and a stack space will be opened in the method stack to store information related to method call, such as method parameters, variables defined in the method, instruction address at the calling method
After the method is called, it will move out of the stack space, return to the address of the calling method, and continue to execute until the main method is out of the stack and the program is executed.
Every time a recursive method recurses, it will open up a space in the stack memory, so it is likely to lead to stack space memory overflow.

Stack: it's like a bucket, first in and last out. The main method is the entrance of java programs, so it's at the bottom of the stack.

Accessing elements in an array and considerations
The elements in the array (arr[index]) can be accessed through the subscript index.

As shown in the above figure, when creating an array, the variable arr in the stack memory points to the address of the array content in the heap memory.
If you create another array int[] arrB;, Then assign arr to arrB. In fact, assign the address of array arr to arrB. arrB and arr point to the same array address. At this time, modifying arr or arrB is the same array in the operation heap memory.

Arrays.toString. When a multidimensional array is encountered, you need to use deepToString to completely convert the array into a string.

Arrays.binarySearch
For binary search, the array must be orderly. If you search for non-existent elements, add 1 to the obtained subscript, and then take the absolute value, it is the position of the elements in the array if they are in the array.