With the end of Jquery knowledge points, I also began to touch the framework.

At the beginning, I always hear the words "plug-in" and "framework". I wonder what's the difference between framework and plug-in? "??

There are countless plug-ins. Any function in a web page can be called a plug-in. It can be extracted separately and used by others. The framework is a super large plug-in. It integrates various methods into one. Users can use it to construct different functions. Plug ins focus on one, often only one function. For example, jquery, which I learned earlier, jquery It's just a framework, in jquery plug-in library http://www.jq22.com/ There are numerous plug-ins, most of which are based on jq framework.

After understanding the differences between plug-ins and frameworks, let's write a library of plug-ins that we have learned in recent days

1.jquery must be a familiar framework for me https://jquery.com/ Plug in Library: http://www.jq22.com/

All of the above mentioned are plug-in libraries, each of which has different functions. I will not go over jquery here. I'll start with Select2

I. Select2 Plug in Library

Select2 is a rich drop-down list plug-in based on jquery. This shows that there must be jquery dependency to use select2, that is to import the jquery library first, then import the select2 plug-in library, and then this is a plug-in about the drop-down list.

Usage: download the compressed package file first. Download address: https://codeload.github.com/select2/select2/zip/develop After downloading and decompressing, we need to find the relevant JS file and css file in the file. All we need are these two files: css and JS under dist folder, JS has. JS file and min.js file, and css is the same. As shown in the figure below

min.js is a compressed version, without comma space and so on. It's small in size and fast in transmission efficiency, but it's poor in readability. You can imagine the scene where JS code is one line. JS is an uncompressed development version, which has good readability and is easy to debug and change. But it's larger in volume and less efficient. I use the compressed version, I don't change bugQAQ, which may solve the problem in my mind

We can start using this plug-in by copying the css and js files into our project.

This is a case rendering. Next, we will write it according to this case list.

First and foremost, import the css and js files. The jquery plug-in library takes precedence. js cs is the file we copied to the project, as follows 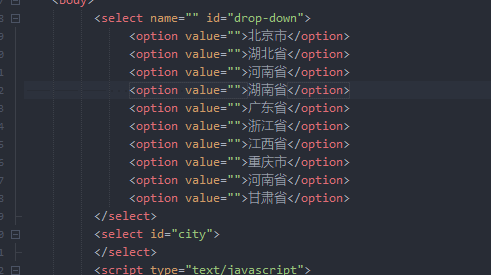 Let me comment js to see how it works: 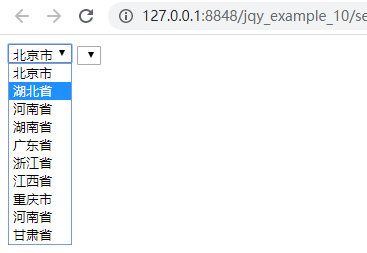 This is very different from our renderings. How to use this plug-in? Let's have a look at the documentation (although it's all in English)

In basic syntax, there is such a statement (we define it in our case):. JS example basic multiple is a selector

In the case, we write as follows (the effect is shown on the right): 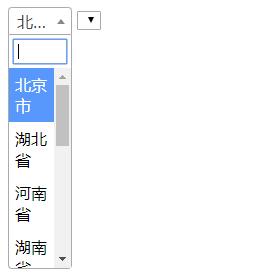 This is the power of select2. We use a line of js code to turn a normal drop-down list into a drop-down list with good visual effect (the width can be modified, and select2 has many built-in properties to view documents).

For example, to set the width of a drop-down list, you only need to write the following (use braces to write properties, and separate each property with commas)

In the third item of the select2 document, there is a configuration table in Options that covers all the attributes of select2

Two attributes are simply written in the case column

Plug in is to simplify the code, let us have a lot less code. It's convenient and simple to use. This is how the simple case list of select2 is completed. Select2 focuses on box selection and many properties. You can go to the document to check the introduction here one by one.

Fullpage This is a full screen plug-in. The whole page is simple and generous. The whole screen is a page. Its official website is a good example https://alvarotrigo.com/fullPage/#page1 . This kind of page display is very popular, I believe most people have seen it.

Copy css js into your own project and introduce js css. Also pay attention to the dependency on jquery and import it into jquery library first as follows:

We can check the document writing (there is a saying in the document that there must be a declaration in the html file, so we should be careful not to copy the code)

Copy this code to the body and start writing the page. The class value, section and the following slide of the div cannot be changed. We must follow the rules of fillpage. However, the id of the outermost div can be set directly for selection in js code

Write as follows in js (first, we use the sectionsColor property to define the background color, one-to-one correspondence)

When you want to define the horizontal switch, the slide will be launched. Nest the following code into < div class = "section" > < / div >

It will generate a horizontal rotation chart. Note that the slide section cannot be changed, as shown in the following figure: 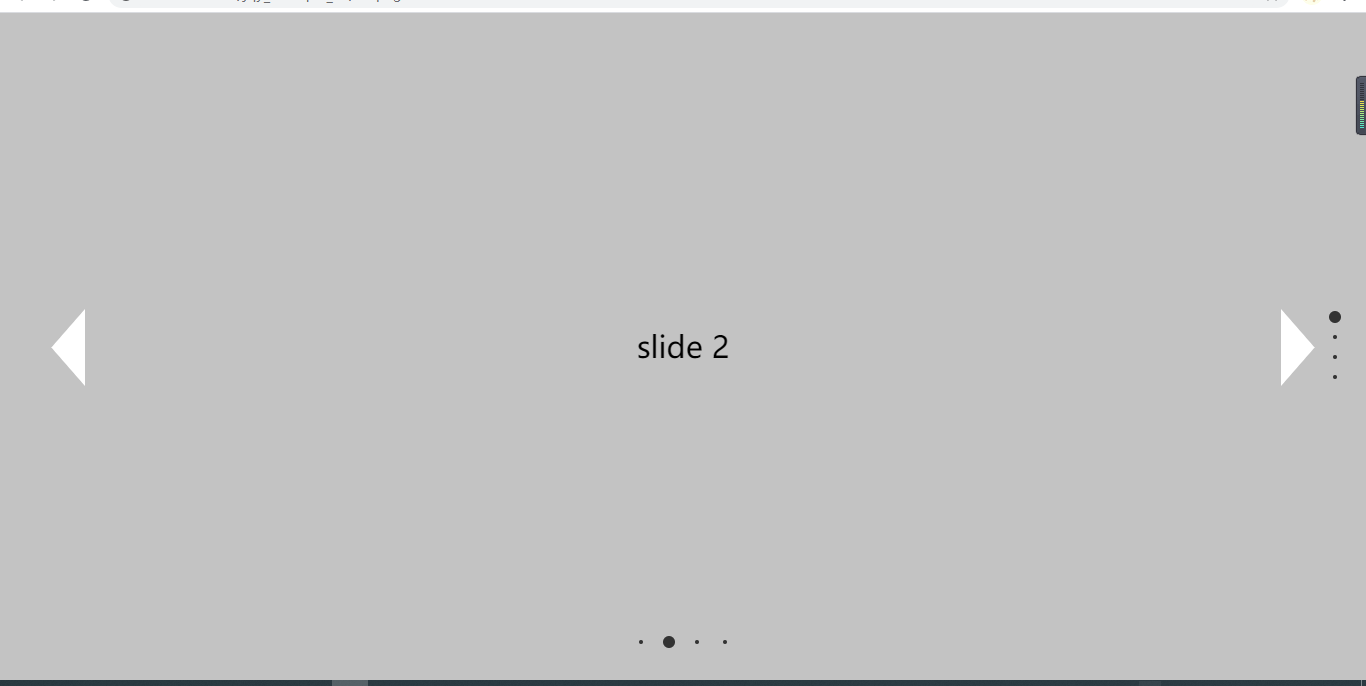 Of course, plug-ins are not omnipotent. fullpage can't set font size, so you need to define your own size. Here is the custom style

There are many attributes on the fullpage document (if you turn down, you can explain them one by one)

In my case list, I wrote several case js codes as follows:

The attributes of the document are clear, so you can write it a little bit. The rendering of this section is not good. I will write the code structure

In this way, the case list of sub fullpage is finished. Similar to the official website, you can try to run it for a while.

Use the same method as above to download the lazyload plug-in package: https://codeload.github.com/tuupola/lazyload/zip/2.x

It's easy to use, because its only function is to delay loading, so I'll go directly to the code (note to find the corresponding css in the download file, and copy the js file to my own project). There is no css file in lazyload

I used 12 pictures, and then js just said that lazy loading can be realized

To add class = "lazload" to each picture, and src cannot be used, you must use data src to write the difference between them 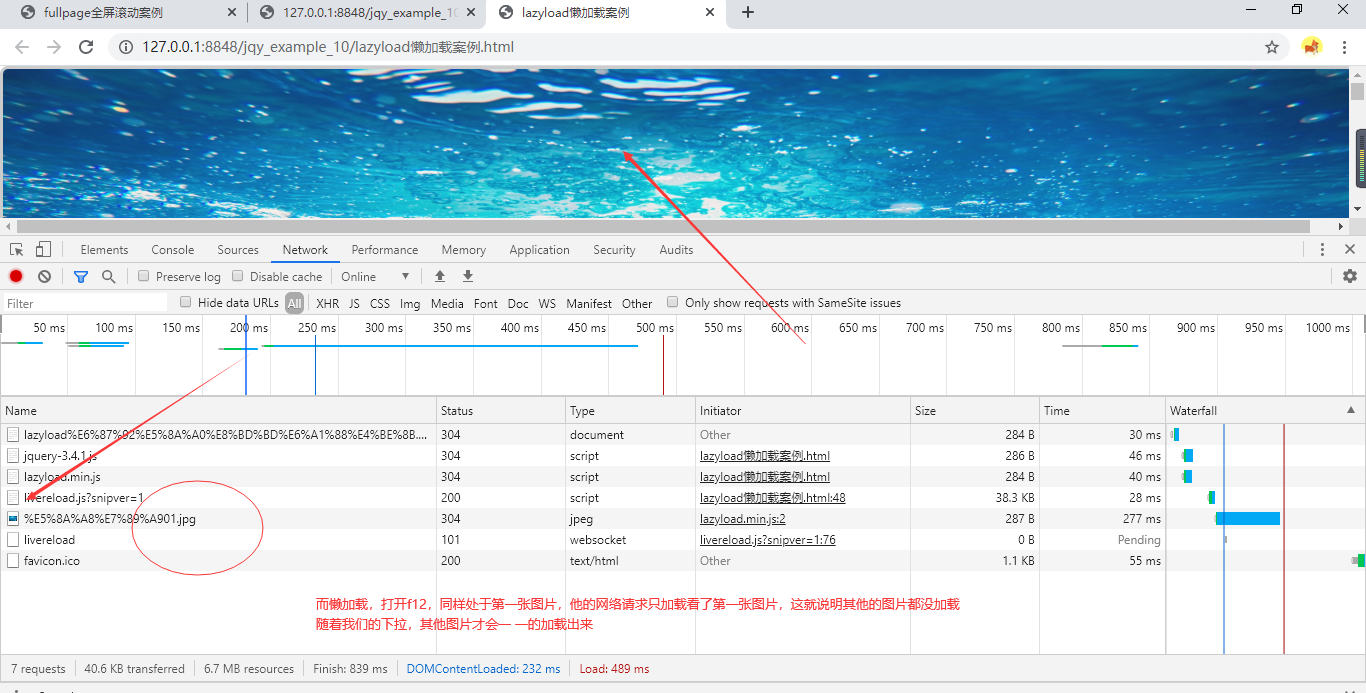 Lazy loading is easy to use, but it has great significance. Some frameworks will also have lazy loading functions in them. For example, the fullpage plug-in described above

So, the use of lazy loading is over. Maybe it doesn't work now, but I think I will meet it again in the future programming days.

Swiper is really attractive to me visually. First of all, it's a touch slider. It's similar to fullpage and has its own characteristics.

I think it's a good choice to use swiper for rotation and navigation. Swiper doesn't rely on jq, so when jq is not needed in the project, you can avoid jquery library

Also download the swiper package first: https://www.swiper.com.cn/download/swiper-5.3.7.zip Find the corresponding js css file in the file, copy it to your own project and import it as follows:

As shown in the figure, the Chinese document of swiper is nice and clear. When the emmmm attribute is a little bit more, I will finish reading it. Now I think, according to the above plug-in library list

I don't need to elaborate on the use of this plug-in. I paste the code directly as follows:

No matter what kind of plug-in or framework it is, its usage is always the same. Similarity is what they have in common, not to mention how comfortable swiper's documents look

nice-validator Plug in is a kind of plug-in about the verification form. When users register, they can judge whether the registered mobile phone number is legal, whether it is empty, whether the password and the confirmation password are equal, whether the email is legal and so on.

Also download first: https://codeload.github.com/niceue/nice-validator/zip/master Copy the corresponding css js file to the project and import it, as follows:

Subject to the case list, I have a simple css style because there is no css. 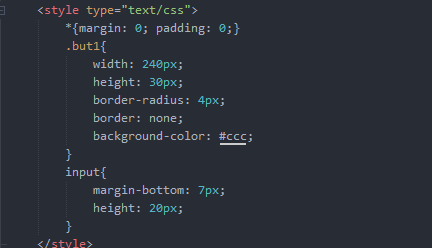 Of course, html forms are also handwritten. For styles and id class names, this plug-in is different from other plug-ins. You can define it yourself: 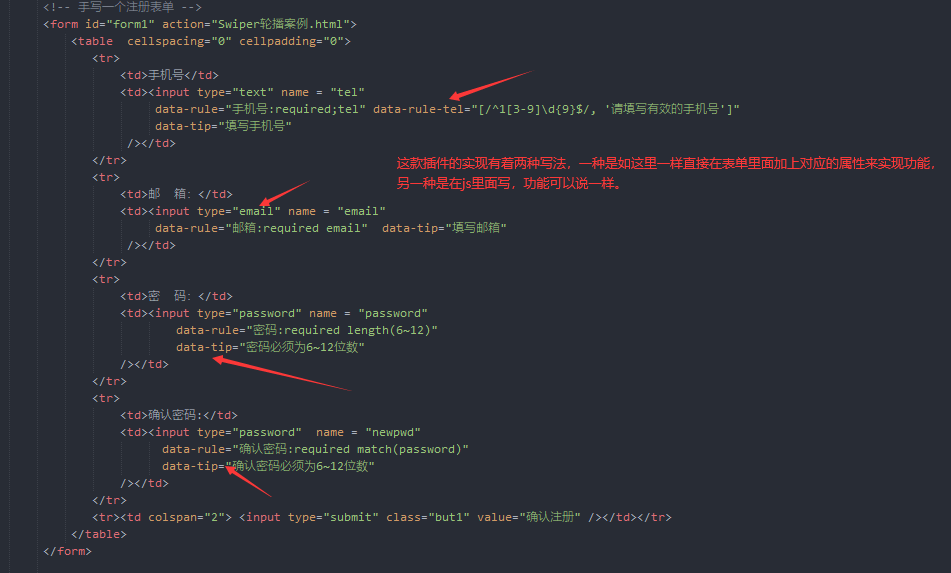 js: no matter how it is written, its function is the same

This attribute can be seen in the introduction of wendang (I simply cut two, more attributes are one step to the official website https://validator.niceue.com/docs/getting-started.html) 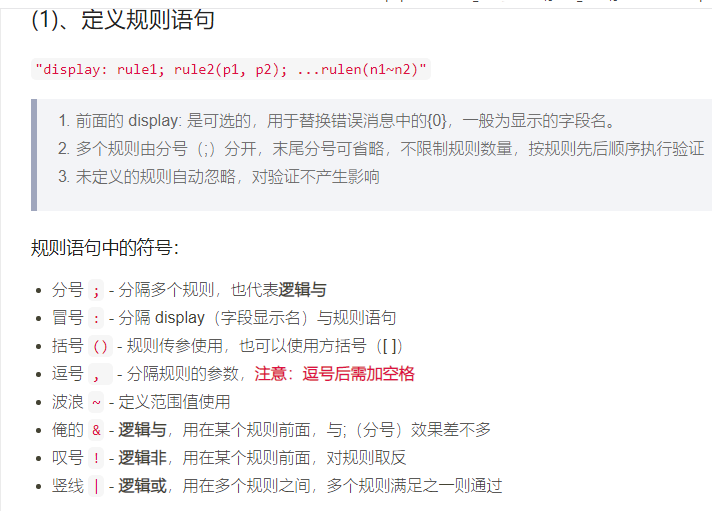 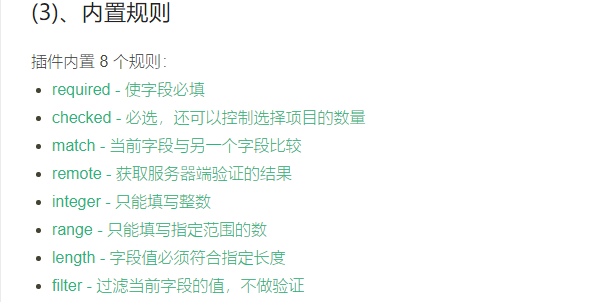 By the way, there's a place around here (I cut it out by myself anyway, I watched it for a long time)

In this way, this plug-in has not been introduced too much. There are many holes and details that you have to see when you really use them

All the above five plug-ins are introduced, and the source code is listed for download: https://files.cnblogs.com/files/2979100039-qq-con/jqy_example_10.zip

I think that after reading this article, all of you have more or less understood the use of plug-ins or frameworks, but you need to understand the truth that one thing on paper needs to be understood,

If someone wants to learn something, he doesn't just want to do it. Therefore, it is an inexhaustible rule to learn programming well to practice frequently.

Please correct any mistakes in your study. QAQ exhausted me to write so many things in one breath. Please mark it when you copy.