Atomic atomic operation class is implemented based on lockless CAS + volatile, and all methods in the class are decorated with final to further ensure thread safety. The specific implementation of CAS algorithm lies in the Unsafe class. All methods of Unsafe class are modified native ly, that is, all methods directly call the underlying resources of the operating system to perform corresponding tasks. Atomic uses an optimistic strategy. It assumes that no conflict occurs during each operation, and uses volatile with CAS to modify variables in memory. If it fails, it will try again until it succeeds.

1. The core idea of CAS algorithm: 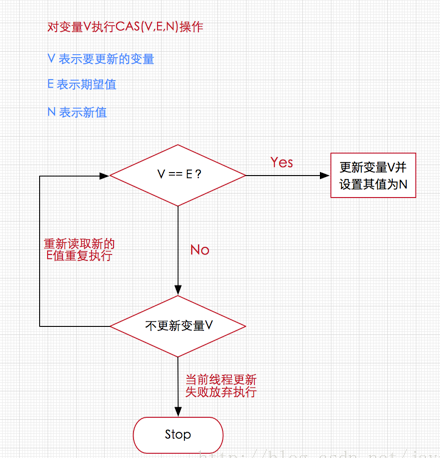 CAS must cooperate with volatile variables to ensure that the variable obtained each time is the latest value in main memory. Otherwise, the old expected value E will always be a constant value E for a thread. As long as a CAS operation fails, it will never succeed. Since there is no lock in CAS lockless operation, it is impossible to have deadlock, that is, innate immunity to deadlock.

2. Support of CPU instruction for CAS:

Since CAS has many steps, will there be a situation: suppose a thread switches the thread and changes the value when it is about to assign a value after judging that V and E are the same, resulting in inconsistent data? The answer is no, because CAS is a system primitive, which belongs to the language category of the operating system. It is composed of several instructions. It is used to complete a process of a function, and the execution of the primitive must be continuous. It is not allowed to be interrupted in the execution process, that is to say, CAS is an atomic instruction of the CPU and will not cause the so-called data inconsistency problem.

3. ABA problem of CAS and its solution:

Suppose such a scenario, when the first thread performs CAS(V,E,U) operation, before obtaining the current variable V and preparing to modify it to the new value u, the other two threads have continuously modified the value of variable V twice, so that the value returns to the old value. In this case, we cannot correctly judge whether the variable has been modified. 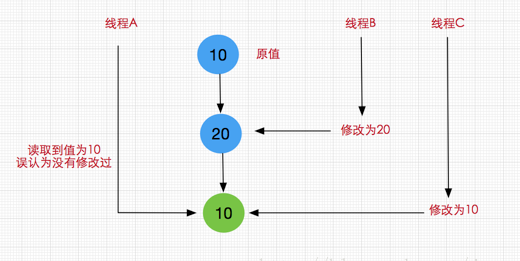 Solution: use the flag with version or timestamp to solve the ABA problem. When updating data, only the data to be updated and the version ID meet the expected value can be replaced.

The execution of CAS operations in Atomic depends on the methods of unsafe class. All methods in unsafe class are modified native ly, that is, all methods directly call the underlying resources of the operating system to perform corresponding tasks. Unsafe class provides many functions. Here we mainly introduce unsafe CAS. Readers interested in other functions can read this article: https://blog.csdn.net/javazejian/article/details/72772470

The Unsafe class exists in the sun.misc package. Its internal method operations can directly operate memory like C pointers. From the name alone, we can know that this class is Unsafe. Because Unsafe has pointer operations similar to C, it should not be used first. Java officials do not recommend using Unsafe classes directly

At the same time, several new methods in JDK8 in Unsafe class are implemented based on the above CAS methods, as follows:

The basic types of atomic update mainly include three classes:

It can be seen that getAndAddInt() keeps trying to update the value to be set through a while loop until it succeeds. It calls the compareAndSwapInt() method in the Unsafe class, which is a CAS operation method. It should be noted that the above source code analysis is based on JDK1.8. If it is the method before 1.8, the implementation of AtomicInteger source code is different. It is based on the for loop, as follows: