Unit test is to write test code, which should ensure the correctness of basic program modules accurately and quickly.
Good unit test standards
JUnit is a Java unit testing framework that has been installed by default in Eclipse.

The basic application of JUnit is introduced based on Eclipse####

The Timeout parameter indicates the time you want to set, in milliseconds, so 1000 represents one second.

JAVA exception handling is also a key point, so you often write some functions that need to throw exceptions. So, if you think a function should throw an exception, but it doesn't, isn't it a Bug? This is of course a Bug, and JUnit has taken this into consideration to help us find this Bug. For example, the calculator class we wrote has division function. If the divisor is a 0, we must throw "divide by 0 exception". Therefore, it is necessary to test these. The code is as follows:

As shown in the above code, we need to use the expected attribute of the @ Test annotation to pass the exception we want to verify to him, so that the JUnit framework can automatically help us detect whether the exception we specified has been thrown.
Parametric test
We may have encountered such a function whose parameters have many special values, or whose parameters are divided into many regions.
For example, to test the function of "calculating the square of a number", it can be divided into three categories: positive, 0, and negative. When writing tests, you should write at least three tests, including all three cases. This is really a troublesome thing. The test code is as follows:

In order to simplify similar tests, JUnit 4 puts forward the concept of "parameterized test", which only writes a test function, passes these situations as parameters, and completes the test at one time. The code is as follows:

The test class has been executed three times, and the data {processing value and expected processing result} in the data set are used in turn. The results are as follows:

Code analysis is as follows:

The combination of spring boot and unit test JUnit

Some people think that writing unit tests is a waste of time. After writing the code, it can still be tested. However, it is still recommended to write unit tests, which can make your organization clearer, and when there is a problem with a function, it may be easy to locate and solve the problem through unit tests. This paper mainly summarizes the methods of using unit test in Spring and Spring boot projects. Compare JUnit 4 and JUnit 5, because I find that my colleagues often don't understand how to use them.

Here we mainly show their dependency packages under Maven

In the above dependency, the scope attribute is written for the two dependencies respectively. Here is an explanation:

The structure of a standard maven project is as follows: 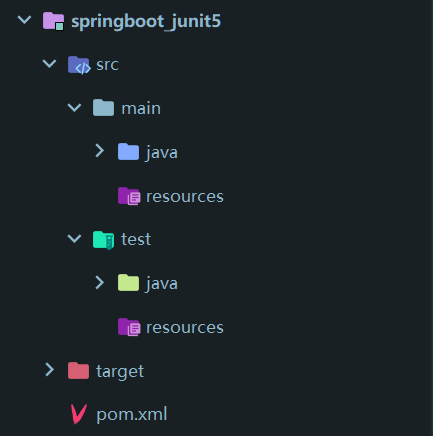 There are two places to write java code: src/main/java and src/test/java. If we do not add scope as the Test attribute in the upper dependency, we can write @ Test test methods anywhere in the two places. However, if we add this attribute, we can only write unit Test code in src/test/java. This is what maven calls the Test domain. It can also be seen from the above figure that the Test domain can have its own configuration file. If it does not, it will load the resources configuration file under main. If it does, its own will take precedence.

JUnit 5 common notes and their usage

No matter which method is used, a standard unit test method is as follows:

But for JUnit 4, all Test methods should be declared in public, while JUnit 5 does not. Only in different versions, the @ Test class is different:

Compared with Junit4, 5 added some new annotations, but the common annotations are the same, mainly as follows:

These are the most commonly used annotations in JUnit 5. You can try one by one and understand their usage in a moment. Pay attention to me. I will give you the specific usage later.

After introducing related dependencies, you can test them at the corresponding location. You can download the code and view it without demonstration here

Using Junit in a Spring project

However, we can automatically load the Spring context by introducing Spring related test dependency, so that we can take advantage of automatic injection methods such as @ Autowired to get bean s

But there are some differences between JUnit 4 and JUnit 5 when they write test methods, as follows:

They all add extra annotations to load the

Using Junit in a SpringBoot project

In Spring boot, we provide an annotation of Spring boot test to load the Spring container. JUnit 4 before Spring boot 2.2.0 and JUnit 5 after Spring boot. But I suggest that JUnit 5 should be used most.

Why not specify the configuration file of Spring container in Spring boot?

Focus on WeChat official account "small fish and Java", reply 2001 to get the source code of this article.