Let's start with the code and see how java creates producers and sends messages.
Firstly, the kafka client jar package is introduced into the pom of maven project, as shown in the following figure:

We are talking about version 2.30 here, so we also choose version 2.3 for jar package.
Then create a producer class and send a message to kafka service. The code is as follows:

The Kafka service receives byte arrays, so in the producer, it is necessary to specify the serializer of the key and value of the message. It mainly implements org apache. kafka. common. serialization. All classes of serializer interface can be used as serializers of Kafka.
Let's look at the source code of the Serializer interface:

According to the source code, the return value of the final serialization is byte [].
Let's see what serialization implementation classes kafka's JAVA API provides us. 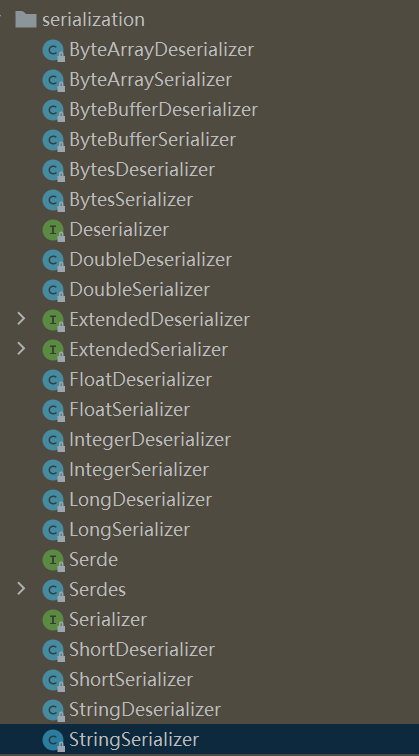 kafka provides many serializers, and each serializer corresponds to a deserializer. Let's look at some useful serializers.

We can see that it calls the getBytes method of String and returns it as byte []. For simple strings, we need not say more. For objects, we can convert them into json strings and send them to kafka server with StringSerializer serializer.

As you can see, we can directly pass in the UUID object. This serializer is used when sending the unique id of business data.

You can see that you need to pass in a JsonNode object, which is a class of jackson tool. jackson is a json processing tool, which we will not explain here.
In addition, kafka also provides byte,short,double,long and other basic types of serializers for us to use.
Custom serializer:
We can define our own Serializer and formulate serialization rules, as long as we implement the Serializer interface. At the same time, we also need to formulate a deserializer to deserialize according to the rules we have agreed in advance. In general, examples are as follows:
Let's first define a custom class and serialize it:

Then we formulate the serializer of this class:

Then we need to define the deserializer:

In the above code, we can see that when creating the ProducerRecord object, there are three parameters:

The first parameter is the subject, the second parameter is the key value of the message, and the third parameter is the value of the message. As we mentioned earlier, kafka's theme is composed of one or more partitions. By default, kafka distributes messages evenly among partitions. It also applies the principle of least use. Send messages to any partition where there are few messages. When we set the key value for the message, that is, the second parameter, then the same key value message will be sent to the same partition, provided that the partition is fixed. Once the number of partitions is changed, it is impossible to ensure that all messages of the same key are in the same partition. Therefore, when creating a theme, we should plan the number of partitions. We will talk about the rebalancing of partitions in consumers. It is also related to the planning of partitions. In short, it is very important to plan the partitions in advance.
Custom partitioner:
kafka client provides Partitioner interface, which is the specification of Partitioner. As mentioned above, kafka sends messages to partitions evenly by default. This mechanism is actually implemented by the implementation class of Partitioner. Let's take a look at the source code of the default partition provided by kafka:

We can see that after calling the send method, the following "after callback" output statement is executed first, and then the finally statement is executed before the method in the callback function is executed. This shows that the message occurs asynchronously. Sending the message does not affect the execution process of the following code. Why is the "method last" the last output? Because it is a code block other than try. After finally executing, the following code will be executed.
Next, we modify the ip or port of kafka to an error, or turn off the kafka service. In short, we simulate the unsuccessful sending of messages. Let's look at the output order:

After running the code, you can see that the output statement of "after callback method" is not output at the first time, but is stuck waiting for the connection of kafka service. Finally, it is not connected and enters the callback function before leaving. This shows that kafka sends messages asynchronously when messages are sent normally. When the message is not sent normally, the thread will still get stuck. Therefore, kafka's asynchronous mode is not completely asynchronous. We will explain its principle in the later advanced article. You can refer to this article for reference:
https://blog.csdn.net/liuxiao723846/article/details/106106257

The producer of kafka is thread safe, that is, multiple threads share one producer, and there will be no data security problems. We won't explain too much here. The actual scenario of public producers under multithreading is still rare.

If an error occurs when the producer client sends a message to the kafka server, there are two situations. One is a retrieable error. After this error occurs, the producer will automatically retry without reporting an error. When the number of retries reaches the set number, if it still fails, an error will be thrown. Another case is to throw an error directly. If the message sending is too large and exceeds the threshold set by kafka server, an error will be reported directly.

Question: what is the difference between a producer listener and a callback for sending messages?
@Use of KafkaListener annotation

In our actual development, we will integrate kafka client into spring or springboot, and rarely use the independent API provided by kafka for development. Fkaka producers will integrate us below.
First, introduce jar package into pom.

Then, we configure the integration information of kafka producer in the configuration file of spring:

In the project, we can invoke the method provided by KafkaTemplate to realize the producer function. (kafkatemplate class is actually another set of methods encapsulated by spring by calling the JAVA API provided by Kafka)

Among them, we need to customize a listener and implement the ProducerListener interface to define the callback function after successful or failed message sending. The code is as follows:

First, introduce the jar package into the pom file:

In this way, the producer's function can be realized through the KafkaTemplate object.