There are Volume and Mount concepts in the operating system.

The purpose of ordinary non persistent volumes is to share storage resources between Pod containers and prevent data loss when Kubelet restarts the container. Therefore, their life cycle is the same as that of Pod. The restart of the container in the Pod does not affect the data storage in the Volume. The data in the Volume will be deleted only after the Pod is destroyed.

Kubernetes supports many types of volumes by default, such as emptyDir, hostPath, configMap, secret downwardAPI, etc. mounted to the container as a Volume. 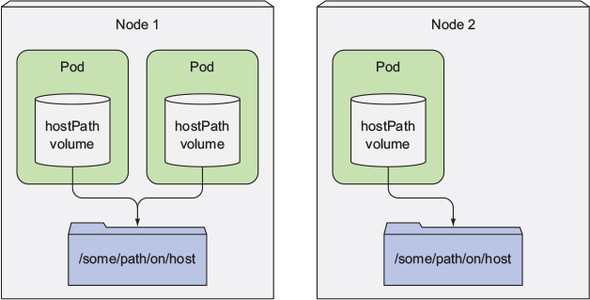 Picture from Kubernetes In Action

In addition to temporary storage and shared files, we also need persistent storage. No matter how the Pod is scheduled, the data is always consistent. For example, when we deploy MySQL, MongoDB and other services in Kubernetes, the data we see at any time should be the same. In addition, storage media is an underlying implementation, and Pod should not care about specific underlying storage types. Therefore, in order to realize persistent storage and decouple the underlying storage from Pod, Kuberetes proposed the concept of Persistent Volume, and the demand of Pod for storage resources is abstracted as Persistent Volume claim.

In this way, in actual use, the cluster can create a batch of PVs in advance to provide storage, while users only need to create PVC and put forward their own storage requirements. Kubernetes will automatically bind PVC and PV. After attaching PVC to Pod, you can read and write data. 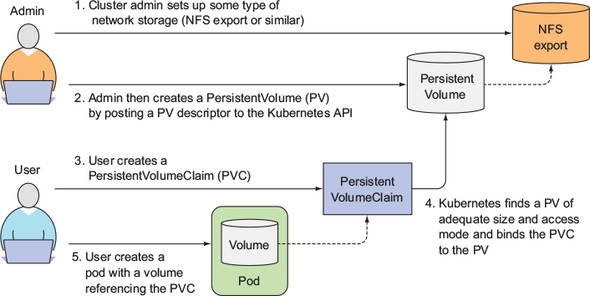 Picture from Kubernetes in Action

The following are examples of the use of PV and PVC:

The following is an example of PV using local disk and NFS as underlying storage respectively:

PVC can select the qualified PV through storageClassName, accessModes, volumeMode and storage capacity. At the same time, it can also select the selection range of PV through label and Key.

The following is the life cycle of PV in use:

The PV mentioned above is pre created by the Cluster Administrator and belongs to static processing. There are two questions:

At the same time, the processing method of data in PV is not flexible enough. In addition to retention and deletion, there can also be more detailed processing, such as deletion to the recycle bin and deletion after retention for a period of time. These may require the administrator to manually operate the underlying storage of PV.

Therefore, in order to allocate and manage storage resources timely and flexibly, Kubernetes introduces the method of dynamic storage allocation, which provides the resource object of StorageClass, which is equivalent to the template of PV. This object is based on a storage provider, such as NFS, AWS S3, etc. when users need storage resources, they only need to create the corresponding PVC and specify StorageClass, When the Pod is created and needs to use storage resources, StorageClass will automatically create PV and bind PVC as needed. 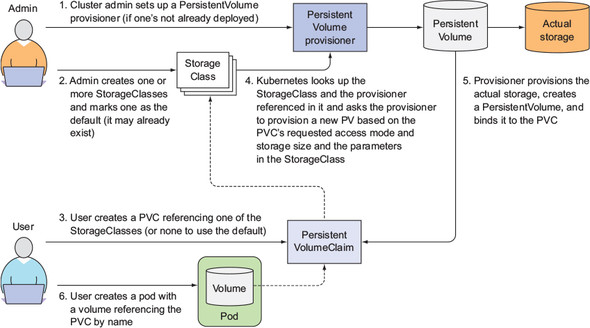 Picture from Kubernetes in Action

The following is an example of using AWS EBS as a provider:

In this way, you only need to specify the StorageClass when creating PVC

In addition, different storageclasses can be created as needed. For example, the following two storageclasses created by GCE PD's provider: slow using standard storage and fast using SSD storage. When creating PVC, you can select the appropriate StorageClass according to your performance needs. In this way, the allocation and use of storage resources can achieve the purpose of flexible allocation on demand. In addition, you can add processing code in the provider to manage the saving and deletion of data and realize more flexible management. Kubernetes officials have clearly suggested abandoning the Recycle strategy. If there are such requirements, Dynamic Provisioning should implement them.

PV persistent storage mostly relies on a remote storage service, such as NFS, AWS S3 and other remote storage. Similar to the process of introducing storage devices in the operating system, first we need to prepare the storage device, then attach it to the system as a block device, and finally mount it to the file system to read and write. The operations in Kubernetes are similar:

For example, when using EaseMesh, the Pod of Control Plane has three volumes, one of which is a persistent volume. Then the directory and data of the corresponding volume can be found under the above directory of the host computer of the Pod.

Now view the attached directory of the host based on PodId and VolumeName, and there will be corresponding files

You can see that there are directories such as data and logs under the directory corresponding to the persistent volume, and these are the data in our persistent volume storage. We use / volumes / easemesh storage of the host disk as storage, so we can see the same file in this directory:

The above steps are implemented by the PersistentVolume Controller of Kubernetes, the Attach/Detach Controller controller and the Volume Manager in Kubelet.

After the above operations are completed, when the Pod deployment creates a container, Kubelet will mount our mounted host directory into the container when starting the container, which is equivalent to executing the following command:

The above is a brief overview of the PV mounting process. Of course, if there is mounting, there is unloading. The above three steps correspond to the opposite operations of Delete, Detach and Unmount, which will not be repeated here.

In addition to the built-in plug-ins, Kubernetes also provides an extension mechanism to implement its own storage plug-ins. The early expansion method was realized through FlexVolume, which has been abandoned in version 1.23. At present, it is mainly realized through CSI (Container Storage Interface). At present, the built-in storage plug-ins in Kubernetes are also undergoing CSI transformation, The built-in plug-ins will eventually be ported from the Kubernetes core.

In the PV mounting process mentioned above, the Provision, Attach, Mount and other operations were finally completed through the built-in Volume plug-in of Kubernetes before CSI. 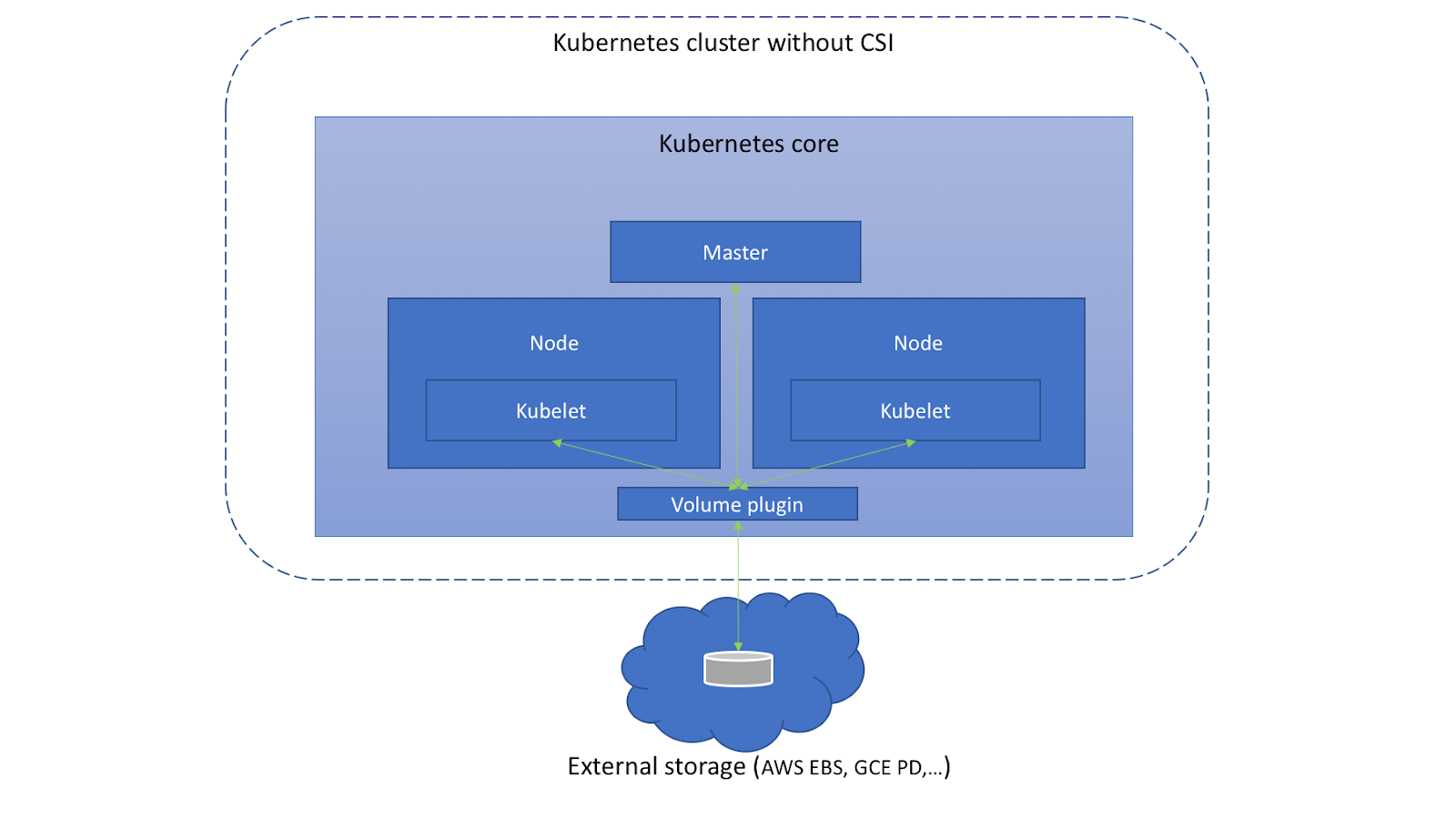 Kubernetes built many Volume plug-ins in the early stage, which played an important role in its wide promotion, but also introduced the following problems:

Therefore, Kubernetes started the migration of built-in plug-ins from version 1.14. As seen before, CNI network interface aims to provide consistent container network operation. CSI provides consistent storage access interfaces for all container scheduling systems, such as Kubernetes and Docker swarm. Third party storage plug-ins can meet the needs of all systems only by implementing the corresponding interfaces according to CSI. 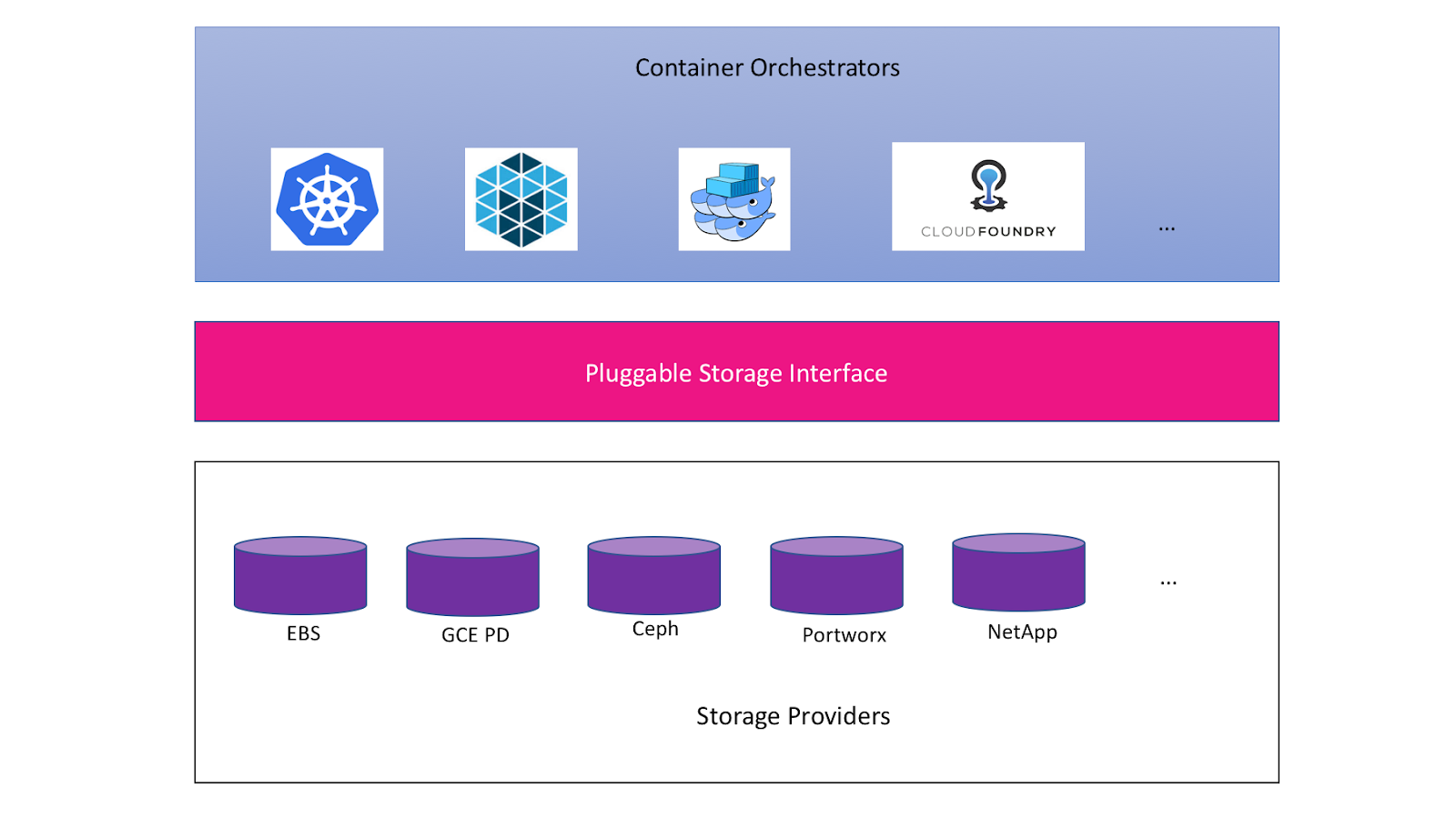 After using CSI plug-in, Kuberetes storage architecture is as follows: 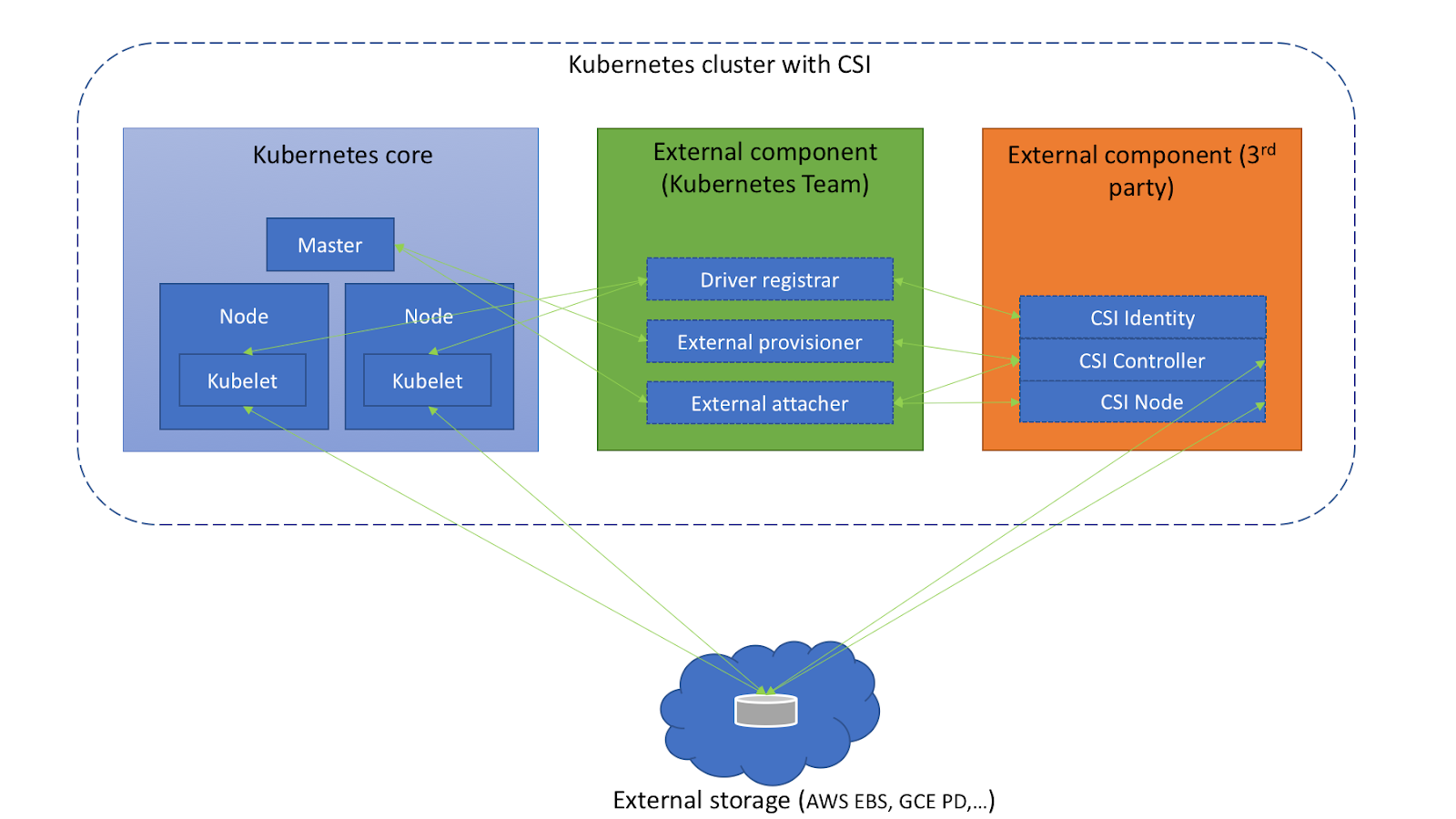 Although this part of the function is separated from the core code of Kubernetes, it is still officially maintained by Kubernetes.

Cloud storage vendors need to implement specific operations. For example, the Provision, Attach and Mount operations mentioned above. There are three main services:

The writing of CSI plug-ins is actually to implement the above three interfaces. Let's take a simple example of csi-s3 plug-ins. The project directory structure is as follows:

There are three files in the pkg/driver Directory:

The three services communicate with Kubernetes through gRPC. The following is the startup code of the service, which defines the version information and plug-in name of the Driver. The CSI plug-in requires that the name comply with the reverse DNS format.

The above is a simple example of csi-c3. After deploying the plug-in to Kuberetes, we can use the plug-in as a provider to dynamically create PV. There are some deployment principles for CSI deployment:

After the CSI plug-in is deployed, StorageClass and PVC can be used. Examples are as follows: