A Suid shell is a shell that can be used to run with owner privileges.

Where id_rsa is the private key, id_rsa.pub is the public key, then open id_rsa.pub, copy the content to the server. Will id_ Content of rsa.pub appended to/root/.ssh/authorized_ Within keys, the configuration is complete.

Execute a sentence backdoor on the target server and SSH on the client root@IP -p 8888, enter any password, log in successfully.

The first thing to start is/usr/sbin/sshd, where regular matching fails when the script executes to getpeername, so execute the next sentence and start/usr/bin/sshd, which is the original sshd. Once the original sshd listening port has established a TCP connection, a subprocess of fork handles the specific work. This subprocess, which has no validation, executes / usr / SBIN / sshd at the default location of the system directly, thus bringing the subcontrol back to the script. At this point, the standard input and output of the subprocess have been redirected to the socket. getpeername can really get the TCP source port of the client and execute sh to a shell if it is 19526.

The simplicity is to pull out a subprocess from sshd fork, redirect input and output to the socket, and make judgments about the connecting client ports.

Troubleshooting technique: Alas can be used to detect anomalies.

The crontab command is used to set instructions that are executed periodically. Create a new shell script and use it to bounce back.

By using the openssh backdoor, setting the SSH backdoor password and the root password record location, it is more concealed, not easy to discover and leave a versatile SSH password by modifying the SSH source code.

Step 3: Unzip the zip file of Baidu Cloud Disk and wear it on the target server for decompression and patching

A message appears that the installation was compiled successfully:

PAM is an application programming interface (API) that provides a series of authentication mechanisms that can reward the results (success or failure) of user verification as long as the user informs the PAM of the requirements of the verification phase. Since PAM is only a mechanism for validation and can also provide references to calls made by other programs, you can use PAM to validate whatever program you use so that your account password or other methods of validation can have consistent results! It also allows programmers to easily handle validation issues.

Step 1: Prepare a clean backdoor system.... (Reset the Openssh backdoor system above) and execute the following command to view the PAM version number.

Step 5: Compile...Success is achieved when something happens

Step 6: Back up the original pam_unix.so, to prevent errors from logging on....

Mafix is a commonly used lightweight application-level Rootkits that enables remote login by forging ssh protocol vulnerabilities. It is characterized by simple configuration and the ability to customize authentication passwords and port numbers.

Disadvantage: commands such as ls are replaced and can be easily deciphered. 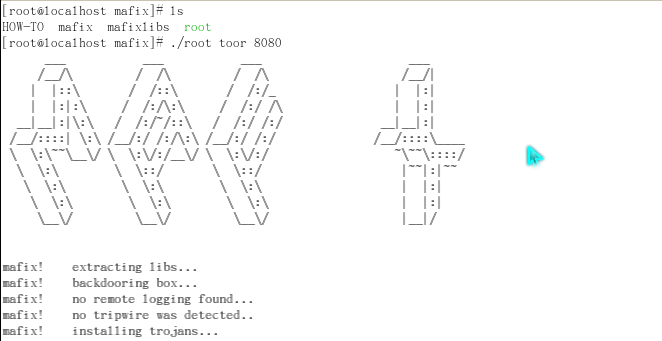