1, Overview
lwIP - A Lightweight TCP/IP stack
The focus of the lwIP TCP/IP implementation is to reduce resource usage while still having a full scale TCP. This makes lwIP suitable for use in embedded systems with tens of kilobytes of free RAM and room for around 40 kilobytes of code ROM.
Main features include:

The above is a description of LwIP's official website. LwIP's full name: Lightweight IP, which means lightweight TCP/IP protocol, is a small open source TCP/IP protocol stack developed by Adam Dunkels of the Swedish Academy of Computer Sciences (SICS). The original design intention of LwIP is to realize a relatively complete TCP/IP protocol stack with a small amount of resource consumption, in which "integrity" mainly refers to the integrity of TCP protocol, and the focus of implementation is to reduce the occupation of RAM on the basis of maintaining the main functions of TCP protocol. In addition, LwIP can be ported to the operating system or run independently without the operating system.

LwIP has the following main features:

LwIP has the following advantages when used in embedded system:

Shortcomings of LwIP:
Although LwIP has so many advantages, it is born for embedded after all, so it does not fully implement TCP/IP protocol stack. Compared with the TCP/IP protocol stack of Linux and Windows systems, the function of LwIP is not complete and powerful. However, LwIP is sufficient for most network applications in the field of Internet of things.

2, Network packet processing
1. TCP/IP is a data communication mechanism. Therefore, the implementation of protocol stack is essentially to process data packets. In order to achieve efficient efficiency, LwIP packet management should provide an efficient processing mechanism. Each layer of the protocol stack can process data packets flexibly and reduce the time and space overhead of data transmission between layers, which is the key to improve the work efficiency of the protocol stack. In the implementation of BSD, a structure describing data packets is called mbuf. Similarly, in LwIP, there is a similar structure called pbuf.

2. The pbuf structure is a data structure that describes the packets in the protocol stack:

Layer (offset) is the header of each layer protocol, such as TCP message header, IP header, Ethernet frame header, etc. these spaces are reserved to flexibly process these data in each protocol layer. Of course, the size of layer can also be 0. The specific amount is related to the application method of data packet. 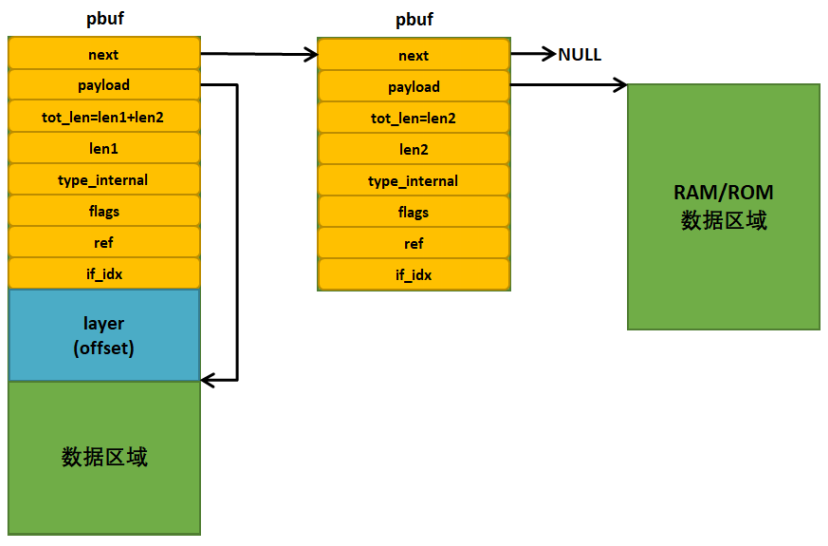 For example, if the TCP protocol needs to apply for a pbuf packet, the following code will be called to apply:

The kernel will allocate a pbuf according to this code_ The data area size of ram type pbuf is 1472 bytes, and the protocol header space will be reserved according to the protocol level. As it is the transport layer, the kernel needs to reserve 54 bytes of space, that is, the Ethernet frame header length PBUF_LINK_HLEN (14 bytes), IP datagram header length PBUF_IP_HLEN (20 bytes), TCP header length PBUF_TRANSPORT_HLEN (20 bytes). When the datagram is submitted to the next layer, other layers
You can directly fill in the corresponding protocol header without copying the data, which is also the advantage of LwIP's fast processing.

The above contents are applied from the practical guide for [wildfire] LwIP application development.