First, let me make an advertisement~

If you need more artificial intelligence courses (source code + Notes + courseware), please scan the QR code to get it 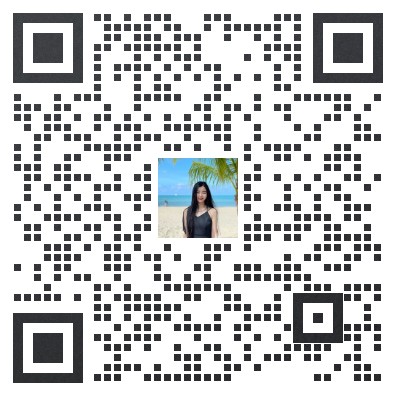 The following is the text

In order to facilitate the exchange of fans, a Q group was established: [809160367,] let's learn and exchange together, including courseware materials, source code sharing and Daniel's problem solving.

Generally speaking, there are three algorithms for machine learning:

The unsupervised learning algorithms include association rules, K-means clustering algorithm and so on

One by one:
1. Linear regression

We can imagine a scenario to understand linear regression For example, you ask a fifth grade child to queue up the students in the class from light to heavy without asking their specific weight. What would the child do? He may line up by observing everyone's height and physique. This is linear regression! The child actually thinks that height and physique are related to people's weight. And this relationship is like the relationship between Y and X in the previous paragraph.

Draw a diagram for you to understand. The linear regression equation used in the figure below is Y=0.28x+13.9 Through this equation, a person's weight information can be predicted according to his height 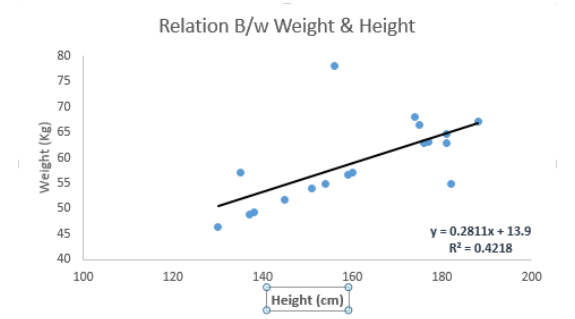 When fitting multiple linear regression, polynomial regression or curve regression can be used

Also use examples to understand:

Suppose a friend of yours asks you to answer a question. There are only two possible outcomes: you get it right or you don't. In order to study the subject field you are best at, you have done topics in various fields. Then the result of this research may be as follows: if it is a tenth grade trigonometric function problem, you have 70% of the possible performance to solve it. But if it's a fifth grade history problem, the probability that you will is only 30%. Logistic regression gives you such a probability result.

The linear combination of predictive variables of the final event is:

As for some people will ask, why do we need to do logarithms? In short, this is the best way to repeat the step function 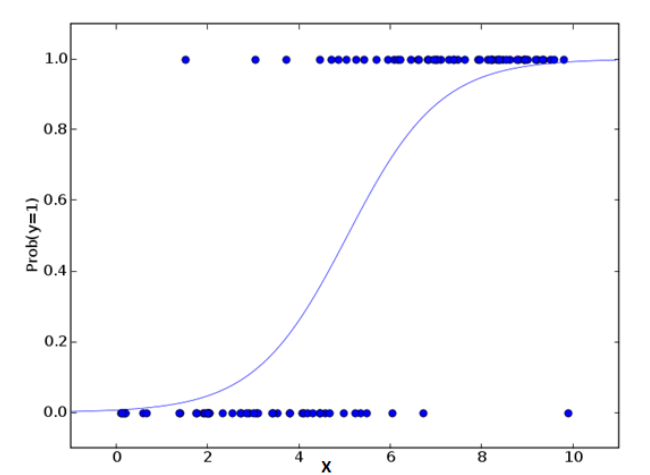 3. Decision tree
This is my favorite and frequently used algorithm. It belongs to supervised learning and is often used to solve classification problems. Surprisingly, it can be applied to both categorical variables and continuous variables. This algorithm allows us to divide a population into two or more groups. The grouping is based on the most important characteristic variables / independent variables that can distinguish the population. 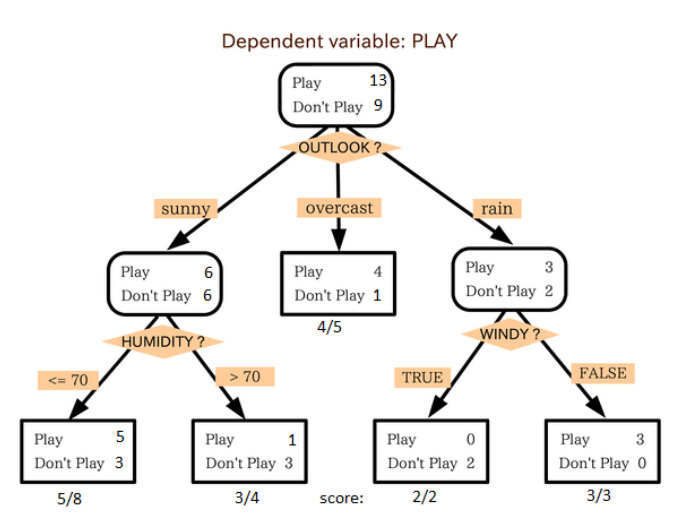 As can be seen from the above figure, the overall crowd is finally divided into four groups in terms of whether to play or not. The grouping is realized according to some characteristic variables. There are many specific indicators for grouping, such as Gini, information gain, chi square and entropy.

4. Support vector machine (SVM)
This is a classification algorithm. In this algorithm, we plot each data as a point in an n-dimensional space (n is the characteristic number), and each eigenvalue represents the size of the corresponding coordinate value. For example, we have two characteristics: a person's height and hair length. We can plot these two variables in a two-dimensional space, and each point on the graph has two coordinate values (these axes are also called support vectors). 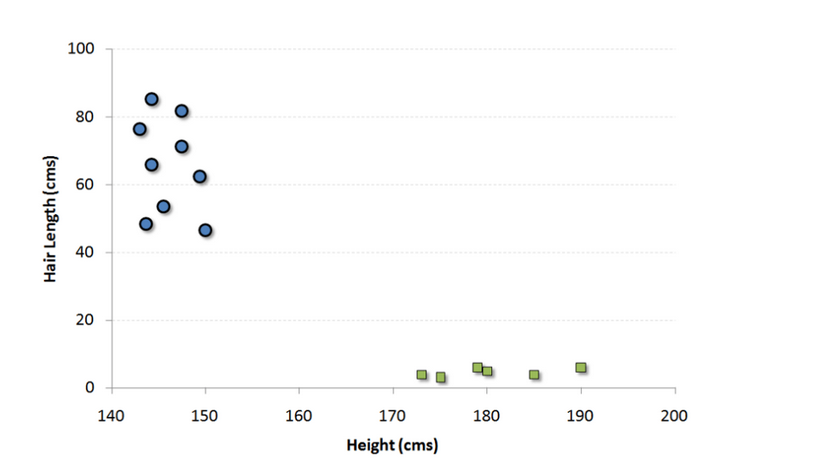 Now we need to find a line in the graph that can separate different groups of points to the greatest extent. In both sets of data, the distance from the nearest point to the line should be the farthest. 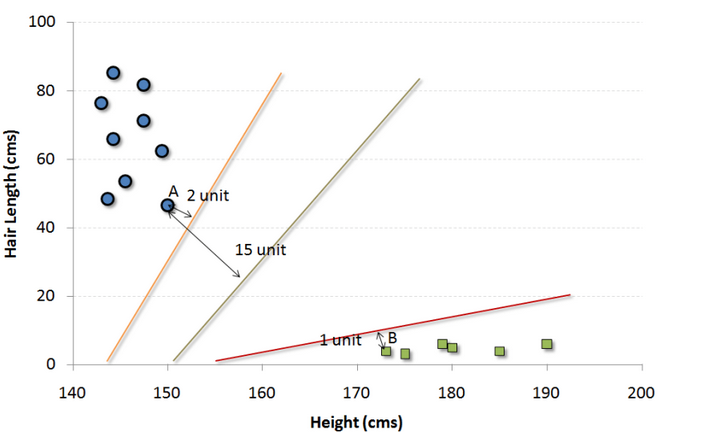 In the above figure, the black line is the best division line. Because this line is farthest from the nearest point in both groups, points A and B are the farthest. Any other line must bring one of the points closer than this distance. In this way, we can classify the data according to which side of the line the data points are distributed.

5. Naive Bayes
This algorithm is a classification method based on Bayesian theory. Its assumption is that the independent variables are independent of each other. In short, naive Bayes assumes that the occurrence of one feature is independent of other features. For example, if a fruit is red, round and about 7cm in diameter, we may guess it is an apple. Even if there is a certain relationship between these features, in the naive Bayesian algorithm, we all believe that red, round and diameter are independent of each other in judging the possibility that a fruit is an apple.

Naive Bayesian model is easy to build and efficient in analyzing a large number of data problems. Although the model is simple, it works better than very complex classification methods in many cases. 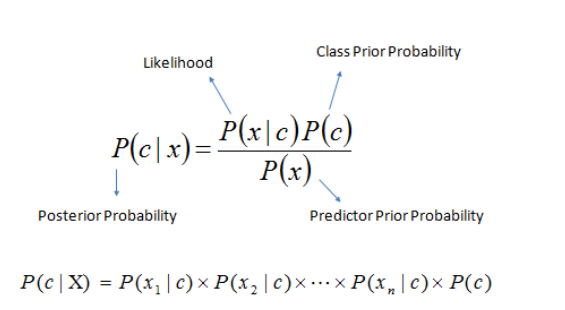 P(c|x) is a posteriori probability classified as C with known feature X.

P(c) is a priori probability of type C.

P(x|c) is the possibility that species C has characteristic X.

P(x) is the a priori probability of characteristic X.

Step 1: make a frequency table according to the known data

Step 3: use naive Bayes to calculate the a posteriori probability of playing and not playing in each weather condition. The result with high probability is the predicted value.
Question: when the weather is sunny, people will play. Is this statement correct?

6.KNN (K-proximity algorithm)
This algorithm can solve both classification problems and regression problems, but it is more used in industry. KNN first records all known data, then uses a distance function to find the K group of data closest to the unknown event in the known data, and finally predicts the event according to the most common category in the K group of data.

KNN is widely used in life. For example, if you want to know someone you don't know, you may learn about him from his good friends and circles.

Before using KNN, you need to consider:

The calculation cost of KNN is very high

Preprocess data before KNN, such as removing outliers, noise, etc.

7. K-Means algorithm
This is an unsupervised learning algorithm to solve the clustering problem. This method simply uses a certain number of clusters (assuming K clusters) to classify the given data. The data points in the same cluster are the same, and the data points in different clusters are different.

Remember how you recognized shapes from ink stains? The process of K-means algorithm is similar. You should also judge the number of clusters by observing the shape and distribution of clusters! 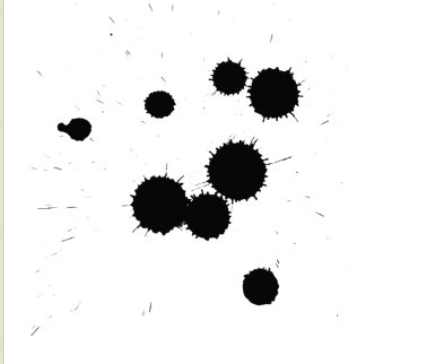 How the K-means algorithm divides clusters: