Major manufacturers are using EhCache. Where is it better than Redis?

With the decline of hardware price, people rely more and more on hardware. I even heard that the code is not important. If not, add machines. For example, the use of cache is usually based on virtual machine memory, disk storage and Middleware (Redis memory). We all know that the most suitable is the best, but in practice, it is often directly available to Redis.

So, is Redis the best choice? Not to mention the memory requirements, it may not be the best in terms of efficiency and performance. Therefore, using different caching strategies in different scenarios is what experts should pursue.

This article introduces you to another caching framework besides Redis: EhCache. The reason why I want to write is also because I used this framework in the project and encountered some problems, so I decided to study it in depth. After the study, it was really interesting~

EhCache is a pure Java in-process caching framework, which is fast and lean. Note that for the keyword process here, the process based cache intuition tells us that the efficiency must be higher, because it operates directly within the process, but there may be problems with cache sharing between different applications.

EhCache provides a variety of cache strategies, mainly divided into memory and disk levels. It is a cache framework for general cache, Java EE and lightweight containers.

Briefly describe the characteristics of the framework:

In addition to its advantages, EhCache also has some disadvantages. For example, it takes up a lot of disk space because the algorithm of DiskCache is simple and only adds storage directly to elements. Although this can improve efficiency, the disk will soon be full in a frequently used system.

In addition, data security cannot be guaranteed. Of course, conflicts may occur when Java processes are suddenly kill ed. The method of EhCache conflict resolution is to rebuild the cache, which may affect the cache data when it needs to be maintained. Cache is only a simple acceleration and cannot guarantee the security of data.

EhCache caches directly in the JVM, which is fast and efficient. Compared with Redis, the operation is simple, easy to use and efficient. Although EhCache also provides a cache sharing scheme, it does not support distributed clusters very well, and the implementation of cache sharing is troublesome.

Redis accesses the cache service through the Socket, which is less efficient than EhCache and much faster than the database. It is convenient to process cluster and distributed cache, and has a mature scheme.

Therefore, if it is a single application or has high requirements for cache access, EhCache can be considered; Redis is recommended for large-scale systems with cache sharing, distributed deployment and large cache content.

Take a look at the architecture diagram of EhCache and see how it consists of several parts.

In process APIs provides support based on JSR, JMX and other standards, which can be well compatible and transplanted. At the same time, it has a perfect monitoring and management mechanism for all kinds of objects.

In the process of use, the Core part that needs attention is the middle Core part. It contains Core API s and concepts:

The management of the three can be represented by the following figure: 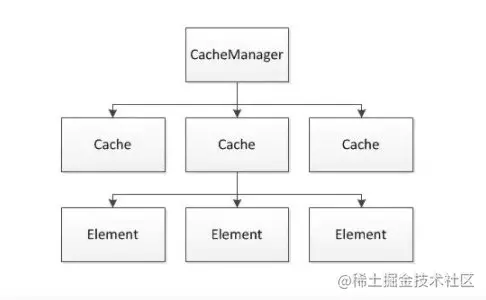 Memory store algorithms such as Memory Store LRU, Memory Store LFU and Memory Store FIFO can also be seen in the architecture diagram. That is, when the cache occupancy is close to the critical value, the above elimination strategy will be used to clean up some data.

Ehcache adopts the lazy elimination mechanism. Each time data is put into the cache, a time will be saved. When reading, TTL will be compared with the set time to judge whether it is expired.

After understanding the above basic knowledge, let's experiment with how to use EhCache. Where EhCache2 X and EhCache3 There is a big gap in the use of X.

Using EhCache based on API

EhCache provides two ways to create CacheManger and Cache based on API and xml. Let's first look at the API based form:

The code created and used is as follows:

The above code demonstrates how to create CacheManager and Cache, set and obtain Cache based on API.

Using EhCache based on XML

3.x version and 2 The X version is different, which is very obvious in the xml configuration file. In 2.x, the ehcache element is the root node, while 3 X takes config as the root node.

The above xml contains three parts:

Other attributes and elements in cache:

Of course, you can also configure the directory of the cache through the persistence element. The use of other attributes can be explored slowly.

Using EhCache based on Spring Boot

As mentioned earlier, Spring supports caching, and Spring Boot also supports automatic configuration of caching. The following is to complete the EhCache integration and use case demonstration based on Spring Boot.

In application Add the following configuration in properties:

Add the @ EnableCaching annotation on the Spring Boot boot class:

Call the corresponding method twice and print the log as follows:

You can see that the first time you enter the method for query, the second time you leave the cache.

There are many usage methods and scenarios for the use of cache annotations provided by Spring, which will not be expanded here.

Because the work happens to use this technology, I studied and wrote an article to take you through the basic knowledge, technical architecture, use scenarios, API use and Spring Boot based integration of EhCache. On the whole, it is at the entry level, and you can further learn and expand on this basis. As for the distributed support of EhCache, this paper does not cover it. The main reason is that it is not so easy to use. If you are interested, you can study it yourself.