Metaball technology is a technology developed by Blinn in 1982, which is suitable for building deformable surfaces. This technology uses metaball to establish an energy field, and then establishes a 3D model through the equipotential surface in the scalar domain to represent the software or implicit surface. Simply put, it means arranging some Metaballs in space. Each metaball has an energy field, which is usually expressed by potential function. There are countless points in the space. At one point, its energy is the superposition of its potential by each metaball. Then find out the points with the same potential energy at all points in space, and get a surface composed of these points.

metaball can be understood as the isosurface of 3D space. Generally speaking, it is a method defined in 3D space: input coordinates as (x,y,z) and output as a float number. The output depends on the threshold. 1 is returned above the threshold and 0 is returned below the threshold In this way, the 3D space is divided into two parts, one is solid and the other is hollow. When two parts of a continuous surface meet, we call it an isosurface. This isosurface will look different from other parts, that is, what we need to deal with is the location of the metasphere connection

In this way, for each spatial point, if the coordinates are (x ', y', z '), its potential energy can be expressed by the following formula:

There are 20 Metaballs in the scene. How to draw the metaball fusion effect

As mentioned earlier, the potential energy of a certain point is the superposition of its potential by each Metaball, so we can calculate it in the slice Shader as follows:

u_metaballs is a uniform variable that stores the position and radius information of the small ball, which is passed in by javascript.

Note: because it is a 2D metasphere, there is no coordinate in the Z direction of space, that is, dz=0

2. Draw according to the threshold

Here, smoothstep implements the processing of the fusion part, and introduces the built-in function of GLSL smoothstep function

If edge0 < x < edge1, smooth Hermite interpolation between 0 and 1 is performed.

The following figure compares the values returned by smoothstep and linstep in chronological order: 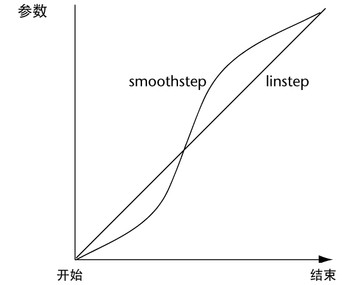 The coordinates of Metaball can be changed dynamically. Here, the dx,dy calculation is directly changed to:

Then the coordinates of MB will be based on u_time changes all the time, with a cycle of 2 Π/ mb.w. The amplitude is 2

From some of the above formulas

We can also add cos (u_time + MB. W) * MB X is multiplied by a factor that changes the amplitude of the change

More smooth and interesting actions can be created through gsap actions