I went to see my high school classmates this week. I'm still very happy. I originally intended to write articles on the implementation of MySQL database transactions or MySQL optimization series, but I haven't thought about how to assemble these knowledge.

Simply change direction this week and write NOSQL. Considering that some students don't know much about JSON, let's first introduce the basic concept of MongDB, then explain why MongDB should be introduced, and then explain how to use it.

What is it? what

MongDB is a document database designed for high scalability and high availability.

A record in MongoDB is a document, which is a data structure composed of fields and value pairs. A MongoDB document is similar to a JSON object. Field values can include other documents, arrays, and document arrays.

About what is JSON? See my article: silly JSON?

Therefore, the record of MongDB is a document similar to a JSON object. MongDB stores the document in a collection, which is similar to a table in a relational database. The access relationship is similar to the following figure: 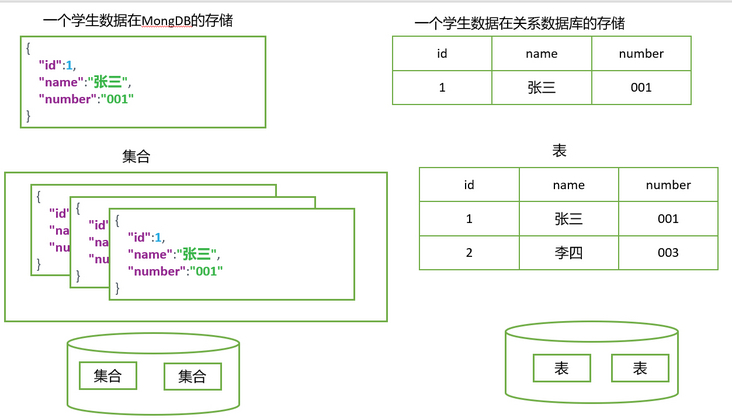 We mentioned above that the record of MongDB is a document similar to JSON. The reason why it is similar to is that MongDB adopts BSON. BSON = Binary JSON, that is, JSON in binary form. At the same time, it expands JSON and has data types that are not available in JSON, such as date type and bindata type.

Then why introduce MongDB? Or what are the advantages of MongDB over relational databases?

Ten years ago, when Dwight and I started this project, which later became MongoDB, we absolutely didn't expect it to look like today. We have only one belief: make developers more efficient. MongoDB was born out of the frustration of using relational databases in large and complex business deployment. We set out to build a database we wanted to use. In this way, whenever developers want to write an application, they can focus on the application itself rather than around the database. Ten years of MongoDB, a review of the founder

So in some areas, MongDB can make developers more efficient.

I know there is a question: what are the advantages, disadvantages and applicable scenarios of NoSQL such as MongoDB compared with relational databases? One of the developers of MongDB answered the following questions. Here I will briefly extract his answer:

Custom attributes are also a problem. For example, the product features of LCD display and LED display are different. This feature of data is called polymorphism. How should the product table be designed in a relational database? Generally speaking, the simplest solution is to turn each possible attribute into a separate column, but if the display manufacturer launches a new feature every year, the table will have to be changed frequently and the scalability is not strong. Another more extreme scenario is that an address book allows users to add new contact information at will. One scheme is to put this custom contact information in one column and store it in json.

The flexibility of MongDB is also reflected in unstructured and semi-structured data. MongDB provides full-text index and supports geographic location query and index. For example, a user wants to know where there is a public toilet within a five kilometer radius. This is "geographical range query". Then he searched the nearest bike. Moby bike uses MongoDB to complete such "distance Sorting Query". It is strongly recommended to use geographic location index to speed up query, because I can understand the user's mood.

Zhou Siyuan, the developer of MongDB, gave a scenario. He needed a subway train timetable in a project. The official data provided is a SQL format that meets the industry standard, that is, it is divided into several tables according to the three paradigms. Then he spent the whole night importing the database into MongDB. But he said that if he did it again, he might directly select the relational database, because if the source data format is SQL data, there is no control and the amount of data is small; With rich cross reference relationships, rich query patterns, and applications that do not require high performance, relational data pages are also a pragmatic choice.

My understanding of this sentence is that from the perspective of modeling application data, in some scenarios, SQL provided by relational database still has strong advantages in statistics, query and analysis.

With what and why, we can start to use it, that is, to install and use it. Fortunately, MongDB has a Chinese operation manual maintained by Chinese people: 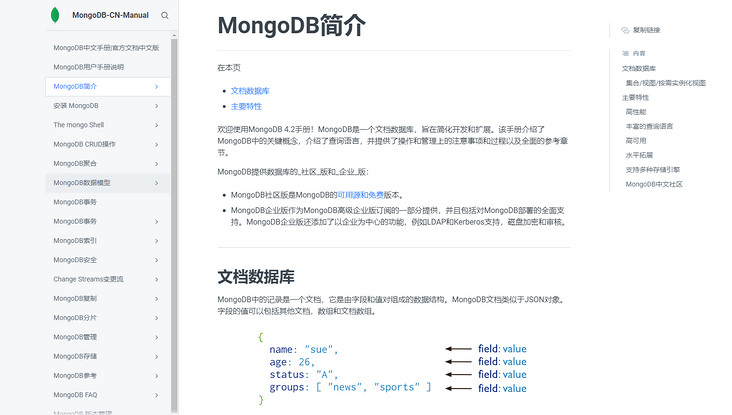 The introduction is quite detailed. There are also installation tutorials and free trials:

So for me, I chose to interview and try. Click in. The development scenario I chose is to develop micro services. You can also choose to install locally. The installation tutorial in this manual is still very detailed. I'll put an address here instead of making a detailed introduction. https://docs.mongoing.com/ins...

However, for this kind of database in the cloud, it may be a little troublesome to install the MongDB shell. I haven't succeeded in installing it on windows for a long time. Here you can use the MongDB GUI. The download address is as follows: 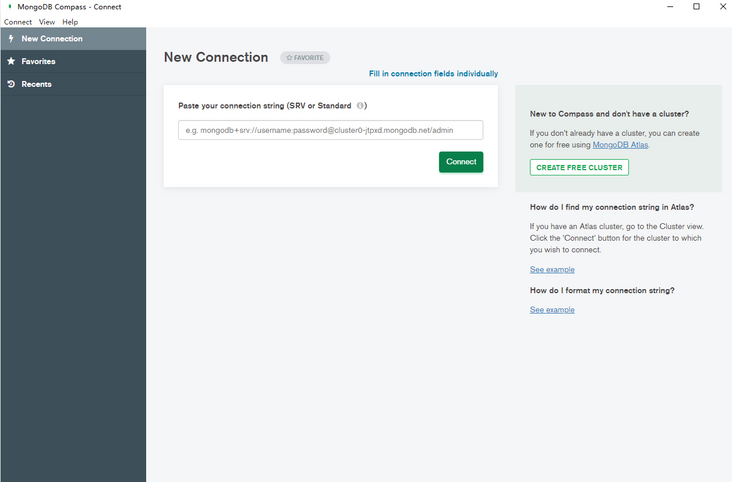 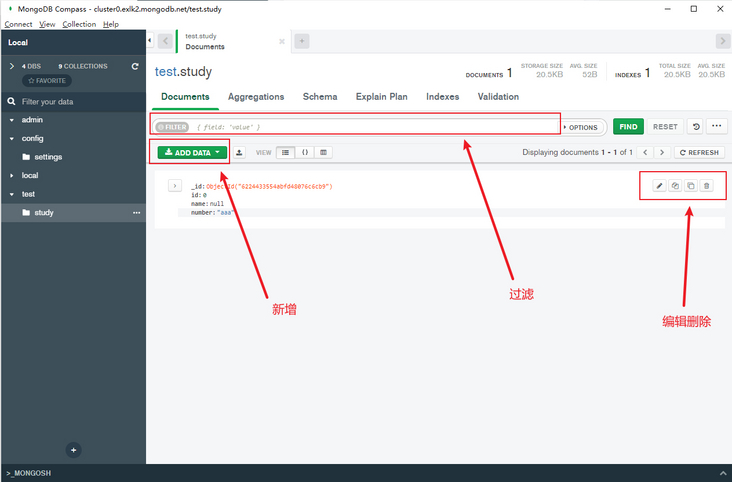 Now let's try to use it. What I talked about in my first encounter is some basic features, such as CRUD. First, the driver must be connected to the database: 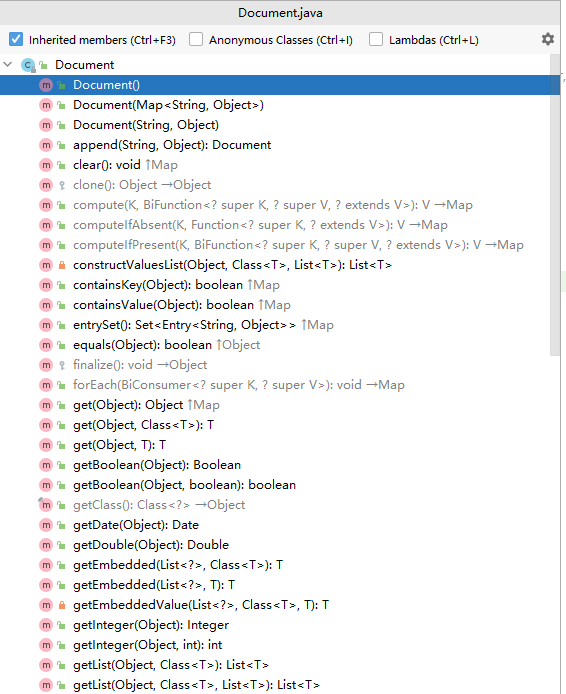 When we add a new object, it is a new Document, like losing value in it. Filter is used to construct condition objects and query:

In essence, Filters is to help you pass the operator. We can also achieve the same effect with the help of Document:

We mainly use MongoCollection to complete the addition, deletion, query and modification of MongDB. The addition is mainly related to Document. Modification, deletion and query can be realized by using Filters and Document. 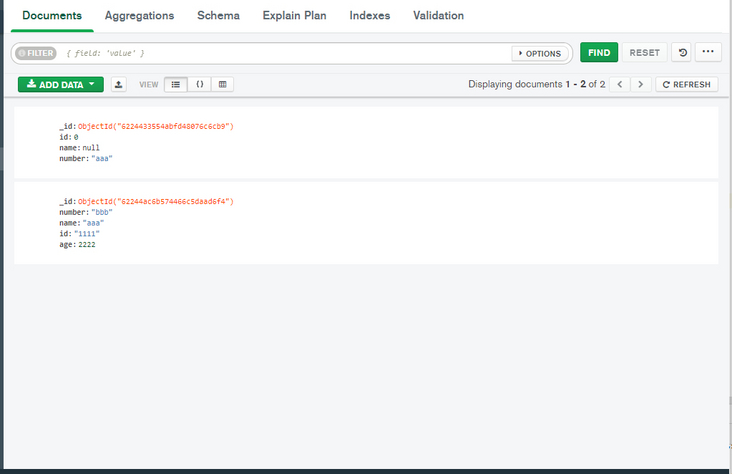 To some extent, we all take the data from the real data, send it to the database after processing, and then take out the data in the database according to the user's request. However, the data structures in the real world are diverse, and the relational database is powerful and can't catch the scene. For example, we discussed why we introduced MongDB above, Another scenario is to describe the relationship between data, such as organizational structure and interpersonal graph. When the amount of data is large, relational database is faced with the problem of slow query speed. In order to describe this nonlinear relationship, graph database came into being. Different databases are dealing with different data description scenarios.