Multithreaded programming - Analysis of the principle of thread pool

What is a thread pool

Thread pool in Java is the most used concurrent framework, and almost all programs that need to execute tasks asynchronously or concurrently
Can use thread pools. In the development process, rational use of thread pool can bring three benefits.
First: reduce resource consumption. Reduce the consumption caused by thread creation and destruction by reusing the created threads.
Second: improve the response speed. When the task arrives, the task can be executed immediately without waiting for the thread to be created.
Third: improve the manageability of threads. Threads are scarce resources. If they are created without restrictions, they will not only consume system resources,
It will also reduce the stability of the system. The thread pool can be used for unified allocation, tuning and monitoring. However, we should make rational use of it
Thread pool, you must know its implementation principle like the back of your hand.

If a thread takes a very long time, there is no need to use the thread pool (it is not impossible to operate for a long time, but not suitable). Moreover, we can't control the start, suspend, and abort of threads in the thread pool.

Java is a language that naturally supports concurrency. Supporting concurrency means multithreading. The frequent creation of threads consumes resources in high concurrency and large amount of data, because Java provides thread pool. Before JDK1.5, the use of thread pool was very simple, but it has been greatly improved after JDK1.5. After JDK1.5, java.util.concurrent package is added. The addition of java.util.concurrent package is of great help to developers in developing concurrent programs and solving concurrency problems. This article mainly introduces and contracts the Executor interface. Although the Executor interface is a very old interface (JDK1.5 released in 2004), many programmers are still unfamiliar with some of its principles. Therefore, this article is written to introduce the Executor interface and consolidate their knowledge. If there are errors in the article, you are welcome to point out.

There are four ways to create thread pools

Java provides four kinds of thread pools through Executors (jdk1.5 parallel contracting), which are:
newCachedThreadPool creates a cacheable thread pool. If the length of the thread pool exceeds the processing needs, idle threads can be recycled flexibly. If there is no recyclable thread, a new thread will be created.

newFixedThreadPool creates a fixed length thread pool, which can control the maximum concurrent number of threads. The exceeded threads will wait in the queue.
newScheduledThreadPool creates a fixed length thread pool to support scheduled and periodic task execution.
Newsinglethreadexecution creates a singleton thread pool. It only uses a unique worker thread to execute tasks, ensuring that all tasks are executed in the specified order (FIFO, LIFO, priority).

Create a cacheable thread pool. If the length of the thread pool exceeds the processing needs, you can flexibly recycle idle threads. If there is no recyclable thread, you can create a new thread. The example code is as follows:

Summary: the thread pool is infinite. When the second task is executed, the first task has been completed. The thread executing the first task will be reused instead of creating a new thread each time.

Create a fixed length thread pool to control the maximum concurrent number of threads. The exceeded threads will wait in the queue. The example code is as follows:

Summary: because the thread pool size is 3 and sleep is 2 seconds after each task outputs index, three numbers are printed every two seconds.

The size of the fixed length route pool is best set according to the system resources. Such as Runtime.getRuntime().availableProcessors()

Create a fixed length routing pool to support regular and periodic task execution. The example code of delayed execution is as follows:

Indicates a delay of 3 seconds.

Create a singleton thread pool. It will only use a unique worker thread to execute tasks to ensure that all tasks are executed in the specified order (FIFO, LIFO, priority). The example code is as follows:

Note: the results are output in sequence, which is equivalent to executing each task in sequence.

3. Judge whether all threads in the thread pool are working. If not, create a new working thread to execute the task. If it is full, it is left to the saturation strategy to handle the task.

To reasonably configure the thread pool, you must first analyze the task characteristics from the following perspectives:

Task dependency: whether it depends on other system resources, such as database connection.

Tasks with different task properties can be processed separately with thread pools of different sizes. For CPU intensive tasks, configure as few threads as possible, for example, configure the thread pool of Ncpu+1 thread. For IO intensive tasks, because they need to wait for IO operations and threads are not always executing tasks, configure as many threads as possible, such as 2*Ncpu. If a hybrid task can be split, it can be split into a CPU intensive task and an IO intensive task. As long as the execution time difference between the two tasks is not too large, the throughput of the decomposed task is higher than that of the serial task. If the execution time difference between the two tasks is too large, it is not necessary to decompose. We can obtain the number of CPUs of the current device through the Runtime.getRuntime().availableProcessors() method.

General summary Oh, there are other better ways. I hope you can leave a message. Thank you.

When the task is CPU intensive, the number of threads can be less configured, which is about the same as the number of CPU cores of the machine, so that each thread can execute the task

In IO intensive mode, most threads are blocked, so the number of threads and 2*cpu cores need to be configured

Name and explanation of operating system:

When multiple requests operate the database at the same time, first change the order status to paid, add 200 to the amount, and duplicate notifications will be caused under the query conditions of concurrent scenarios at the same time.

Pessimistic lock: pessimistic lock believes that each operation will cause the loss of updates, and an exclusive lock is added each time.

Every time I go to get the data, I think others will modify it, so I lock it every time I get the data, so that others will block the data until it gets the lock. Many such locking mechanisms are used in traditional relational databases, such as row lock, table lock, read lock and write lock, which are locked before operation.

As a tool for concurrent sharing of data and ensuring consistency, locks are implemented in a variety of JAVA platforms (such as synchronized and ReentrantLock, etc.). These locks that have been written provide convenience for our development.

Reentry lock, also known as recursive lock, means that after the outer function of the same thread obtains the lock, the inner recursive function still has the code to obtain the lock, but it is not affected.
In JAVA environment, ReentrantLock and synchronized are reentrant locks

comparison Locks in Java In the Lock implementation, the read-write Lock is more complex. Suppose your program involves read and write operations on some shared resources, and the write operations are not as frequent as the read operations. When there is no write operation, there is no problem for two threads to read a resource at the same time, so multiple threads should be allowed to read shared resources at the same time. However, if a thread wants to write these shared resources, no other thread should read or write to the resource. This requires a read / write Lock to solve this problem. Java 5 already contains read-write locks in the java.util.concurrent package. Nevertheless, we should understand the principle behind its implementation.

(1) Compared with locks, the use of comparison exchange (hereinafter referred to as CAS) will make the program look more complex. However, due to its non blocking nature, it is inherently immune to deadlock problems, and the interaction between threads is much smaller than that based on locks. More importantly, the lock free method has no system overhead caused by lock competition and frequent scheduling between threads. Therefore, it has better performance than the lock based method.

First, in the case of high concurrency, it has better performance than locked programs;

Second, it is inherently deadlock immune.

With these two advantages, it is worth taking the risk of using lockless concurrency.

(4) CAS operation is carried out with an optimistic attitude. It always thinks that it can successfully complete the operation. When multiple threads use CAS to operate a variable at the same time, only one will win and update successfully, and the rest will fail. The failed thread is not suspended. It is only informed of the failure and allowed to try again. Of course, the failed thread is also allowed to give up the operation. Based on this principle, even if CAS operation has no lock, it can find the interference of other threads to the current thread and handle it appropriately.

(5) In short, CAS requires you to give an additional expected value, that is, what you think this variable should look like now. If the variable is not what you think, it means that it has been modified by others. Just read it again and try to modify it again. 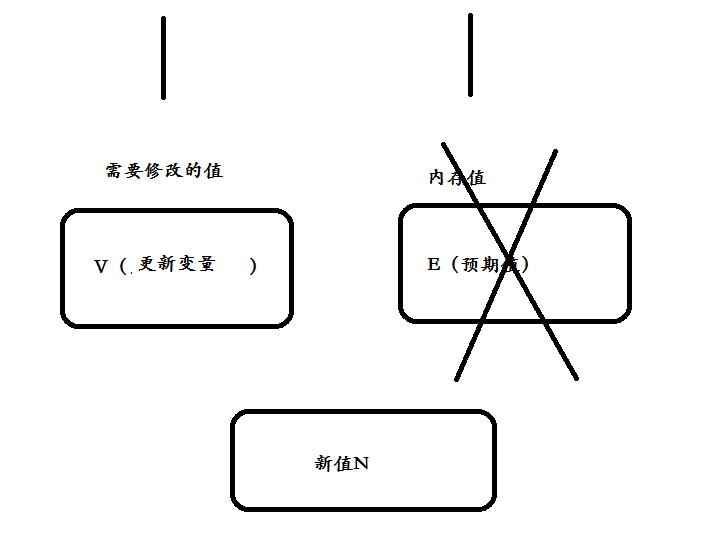 Spin lock is realized by making the current thread execute in the loop body continuously. When the conditions of the loop are changed by other threads, it can enter the critical area. as follows

When a thread calls this non reentrant spin lock to lock, it is OK. When lock() is called again, because the holding reference of the spin lock is no longer empty, the thread object will mistakenly think that another thread holds the spin lock

Because the spin lock just keeps the current thread executing the loop body without changing the thread state, the response speed is faster. However, when the number of threads keeps increasing, the performance decreases significantly, because each thread needs to execute and occupies CPU time. If the thread competition is not fierce, and the lock is maintained for a period of time. Suitable for spin lock.

If you want to ensure data synchronization in different JVMs, use distributed locking technology.