Earlier, we studied the principle of RPC. There are many frameworks based on RPC, such as Dubbo. Today, we will deeply analyze Dubbo from its SPI mechanism, service registration and discovery source code and network communication process. 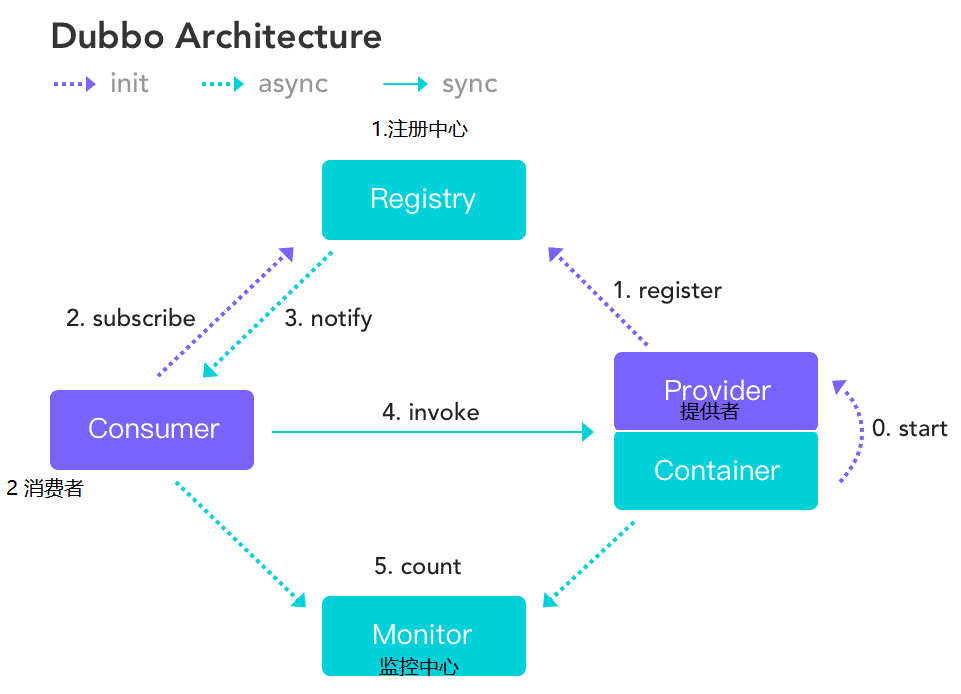 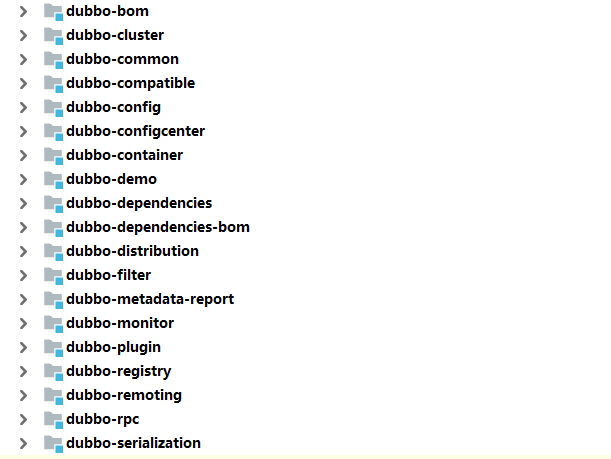 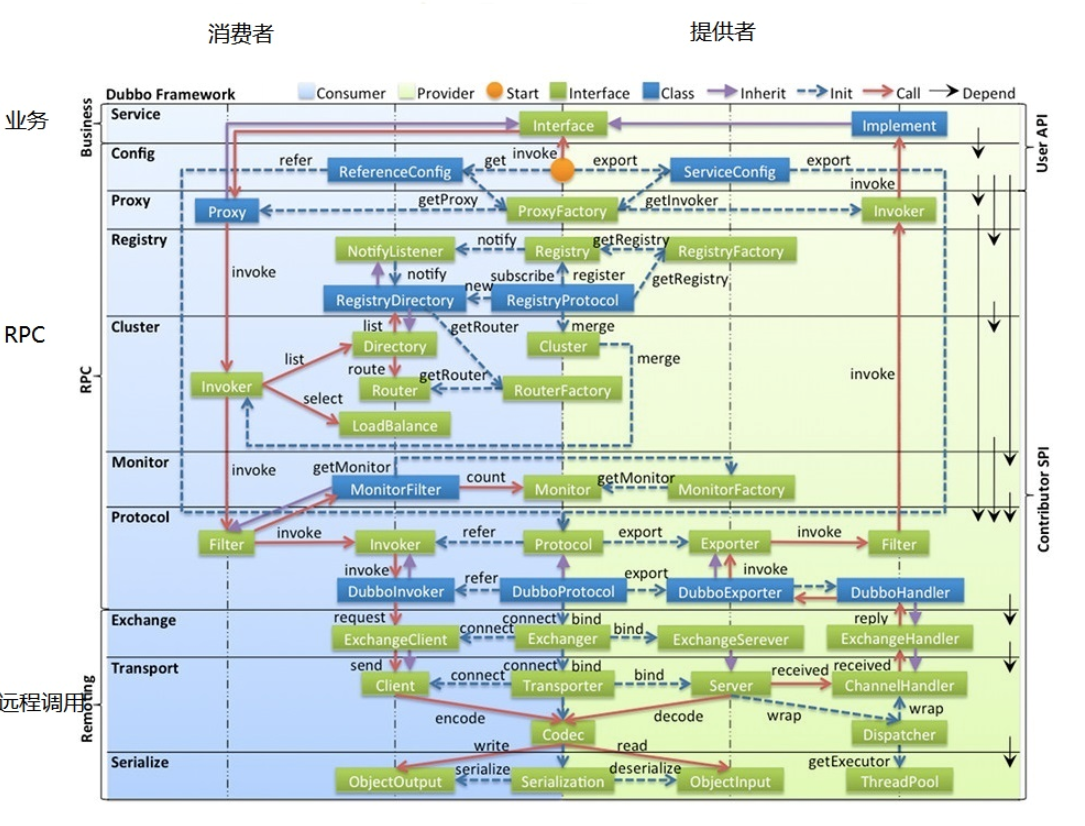 Description of each layer

Compared with the overall architecture diagram above, it can be roughly divided into the following steps:

1. The service provider starts, starts the Netty service, creates a Zookeeper client, and registers the service with the registry.

3. The service consumer starts to call the service remotely through the interface. ProxyFactory initializes the Proxy object and Proxy creates the dynamic Proxy object.

4. The dynamic proxy object is wrapped layer by layer through the invoke method to generate an Invoker object, which contains the proxy object.

6. Then, the DubboInvoker object is wrapped into a Reuqest object through exchange, which is transmitted to the NettyServer side of the service provider through serialization through NettyClient.

SPI is a very important module in Dubbo. Based on SPI, we can easily expand Dubbo. If you want to learn Dubbo's source code, you must understand the SPI mechanism. Next, let's first understand the usage of Java SPI and Dubbo SPI, and then analyze the source code of Dubbo SPI.

Java SPI is actually a dynamic loading mechanism realized by the combination of "interface based programming + policy mode + configuration file".

Let's understand SPI through a case

Create a folder META-INF.services under the resources directory, and create a file com.laowang.User with the same name as the full path of User under this folder

We found that the SPI mechanism helped us automatically run two implementation classes. 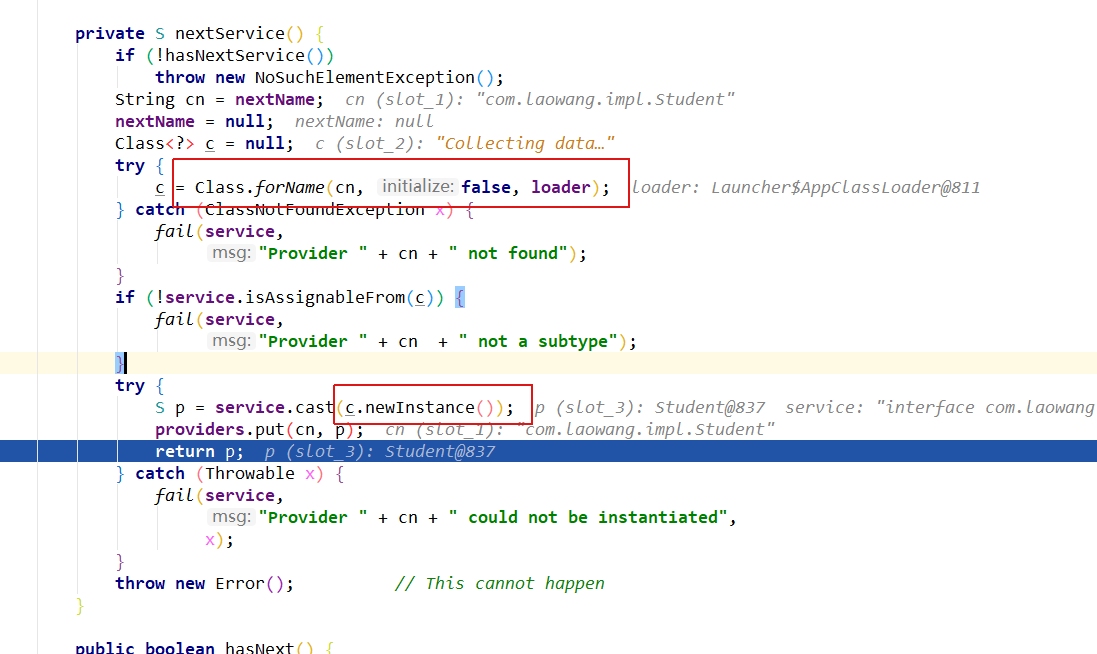 In fact, by reading the full path class name of the implementation class in the configuration file, create an object through reflection and put it into the providers container.

Call procedure
The application calls the ServiceLoader.load method to create a new ServiceLoader and instantiate the member variables in the class
The application obtains the object instance through the iterator interface. ServiceLoader first determines whether there is a cache instance object in the member variable providers object (LinkedHashMap < string, s > type). If there is a cache, it returns directly. If there is no cache, perform class loading,
advantage
The advantage of using Java SPI mechanism is to realize decoupling, so that the definition of interface is separated from the specific business implementation, rather than coupled together. The application process can enable or replace specific components according to the actual business situation.
shortcoming
Cannot load on demand. Although ServiceLoader does delayed loading, it can only be obtained by traversing all, that is, the implementation classes of the interface have to be loaded and instantiated. If you don't want to use some implementation classes, or some class instantiation is time-consuming, it is also loaded and instantiated, which is a waste.
The method of obtaining an implementation class is not flexible enough. It can only be obtained in the form of Iterator, and the corresponding implementation class cannot be obtained according to a parameter.
It is not safe for multiple concurrent threads to use instances of the ServiceLoader class.
Throw an exception that is not the real reason when the implementation class cannot be loaded, and the error is difficult to locate.

Dubbo does not use Java SPI, but re implements a more powerful SPI mechanism. The relevant logic of Dubbo SPI is encapsulated in the ExtensionLoader class. Through ExtensionLoader, we can load the specified implementation class.

When using Dubbo SPI, you need to mark @ SPI annotation on the interface.

Through ExtensionLoader, we can load the specified implementation class. The following is a demonstration of Dubbo SPI:

In addition to supporting on-demand loading of interface implementation classes, Dubbo SPI also adds features such as IOC and AOP, which will be introduced one by one in the next chapter of source code analysis.

The logic of the createExtension method is slightly more complex, including the following steps:

How does Dubbo's SPI implement IOC and AOP

Before we say this, we need to know the decorator mode

Decorator mode: dynamically attach responsibility to an object without changing the original class file and using inheritance, so as to dynamically expand the function of an object. It wraps the real object by creating a wrapper object, that is, decoration.

When using Spring, we often use the AOP function. Insert additional logic before and after the method of the target class. For example, Spring AOP is usually used to realize logging, monitoring, authentication and other functions. Does Dubbo's extension mechanism support similar functions? The answer is yes. In Dubbo, there is a special class called Wrapper class. Through decorator mode, wrap the original extension point instance with a Wrapper class. Insert other logic before and after the implementation of the original extension point to realize the AOP function.

Let's see what cachedWrapperClasses are?

Is a set set. When did the set add elements?

Added through this method, and then see who called this private method:

We know that in Dubbo, many extensions are loaded through SPI mechanism, such as Protocol, Cluster, LoadBalance, ProxyFactory, etc. Sometimes, some extensions do not want to be loaded at the framework startup stage, but want to be loaded according to the runtime parameters when the extension method is called, that is, dynamically load the implementation class according to the parameters.

At runtime, the specific extension is dynamically determined according to the method parameters. In Dubbo, it is called the extension point adaptive instance. It is actually an extension point proxy that delays the selection of extension from Dubbo startup to RPC call. Each extension point in Dubbo has an adaptive class. If it is not explicitly provided, Dubbo will automatically create one for us. Javaassist is used by default.

The implementation logic of adaptive expansion mechanism is as follows

Javassist is an open source class library for analyzing, editing and creating Java bytecode. It was founded by Shigeru Chiba of the Department of mathematics and computer science of Tokyo University of technology. It has joined the open source JBoss application server project to implement a dynamic AOP framework for JBoss by using javassist to operate on bytecode. Javassist is a sub project of JBoss. Its main advantage is that it is simple and fast. Directly use the form of java coding without understanding the virtual machine instructions, you can dynamically change the class structure or dynamically generate classes.

Adaptive can be annotated on classes or methods.
Label on class: Dubbo does not generate proxy classes for this class.
Marked on the method: Dubbo will generate proxy logic for the method, indicating that the current method needs to call the corresponding extension point implementation according to the parameter URL.

Each extension point in Dubbo has an adaptive class. If it is not explicitly provided, Dubbo will automatically create one for us. Javaassist is used by default. Let's take a look at the code to create an adaptive extension class

The createadaptive extensionclasscode () method uses a StringBuilder to build the Java source code of the adaptive class. The method implementation is relatively long, so the code will not be pasted here. This way of generating bytecode is also very interesting. You can generate java source code, compile it, and load it into the jvm. In this way, you can better control the generated Java classes. Moreover, there is no need to care about the api of each bytecode generation framework. Because the xxx.java file is common to Java and we are most familiar with it. But the readability of the code is not strong. You need to build the content of xx.java bit by bit. 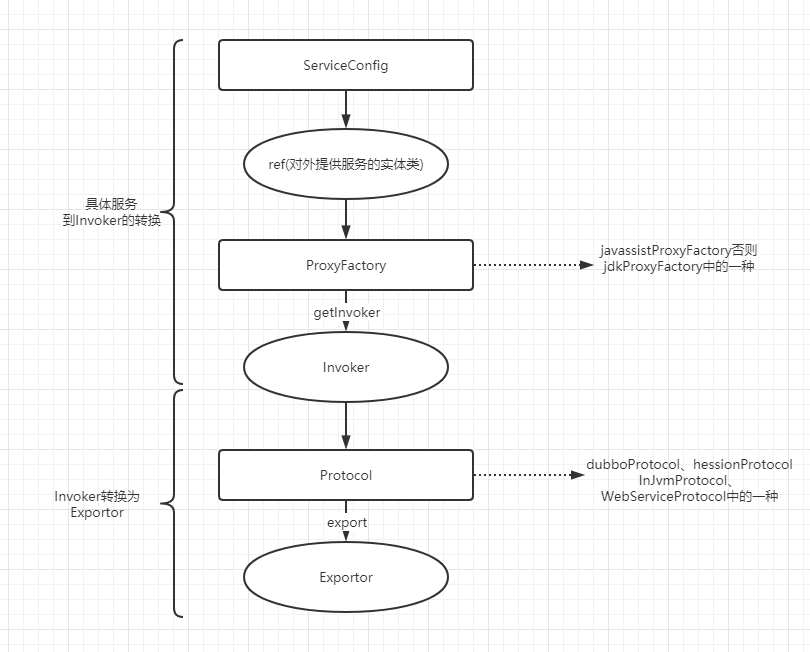 On the whole, the service exposure of Dubbo framework is divided into two parts. The first step is to convert the held service instances into invokers through agents, and the second step is to convert the invokers into exporters through specific protocols (such as Dubbo). This abstraction of the framework also greatly facilitates function expansion.

The service provider exposes the blue initialization chain of the service. The sequence diagram is as follows: 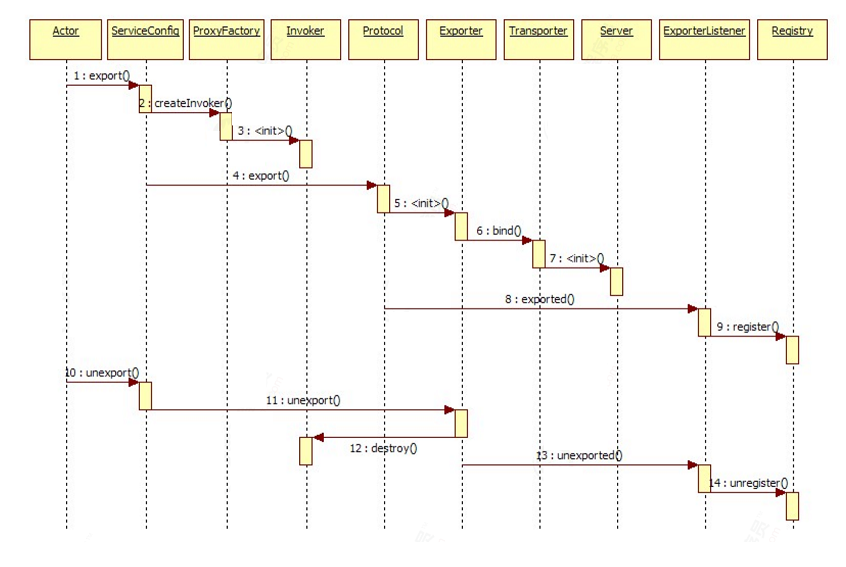 The doExportUrlsFor1Protocol() method code is much older. We only focus on the core of the relationship

The above code determines the service export method according to the scope parameter in the url, as follows:
scope = none, do not export service
scope != remote, export to local
scope != local, export to remote

After the Invoke is created successfully, let's look at the local export

The exportLocal method is relatively simple. First, determine whether to export the service according to the URL protocol header. To export, create a new URL and set the protocol header, hostname, and port to the new values. Then create an Invoker and call the export method of InjvmProtocol to export the service. Let's take a look at what the export method of InjvmProtocol does.

As mentioned above, the export method of the InjvmProtocol creates only one InjvmExporter without any other logic. After exporting the service to the local, the analysis is finished.

Take another look at exporting services to remote

The above code looks complex. It mainly does the following operations:

Next, analyze the creation process of the server instance. as follows

The first is to check whether the Transporter extension represented by the server parameter exists. If it does not exist, an exception will be thrown.

The second is to create a server instance.

The third is to check whether the Transporter extension represented by the client parameter is supported. If it does not exist, an exception is thrown. The code corresponding to the two detection operations is more straightforward, so there is no need to say more. However, the operation of creating a server is not very clear. Let's continue to look at it.

The above code is relatively simple, so I won't say more. Let's take a look at the bind method of HeaderExchanger.

HeaderExchanger's bind method contains a lot of logic, but at present, we only need to care about the logic of Transporters' bind method
Just edit it. The code of this method is as follows: 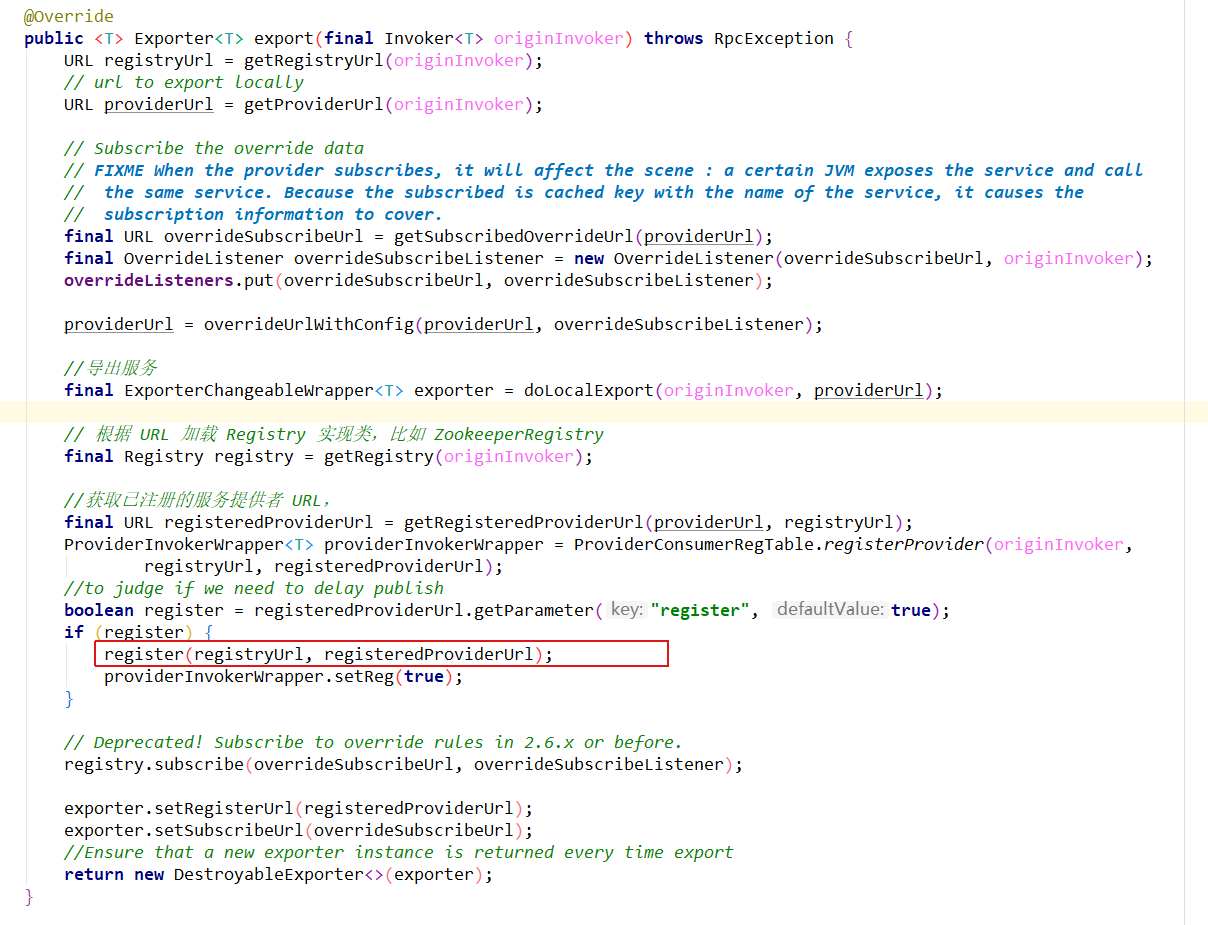 Look at the getRegistry() method

In the above code, we focus on the connect method call of ZookeeperTransporter, which is used to create
Zookeeper client. Creating a zookeeper client means that the creation process of the registry is over.