We know that channel is the bridge between ByteBuf and Event in netty. During the creation of netty service, whether it is the Bootstrap on the client side or the ServerBootstrap on the server side, we need to call the channel method to specify the corresponding channel type.

So what are the types of channel s in netty? How do they work? Let's have a look.

So what is the difference between client-side channel and server-side channel? Let's first look at the definition of ServerChannel:

You can see that ServerChannel inherits from Channel, which means that the Channel on the server is also a kind of Channel.

But strangely enough, you can see that there are no new methods in ServerChannel. In other words, ServerChannel and Channel are essentially the same in definition. You can think of ServerChannel as a tag interface.

So what is the relationship between channel and ServerChannel?

We know that a parent method is defined in the Channel:

The parent method returns the parent channel of the channel. Let's take the simplest LocalChannel and LocalServerChannel as examples to see how their parent-child relationship is created.

Firstly, the value of parent is realized through the public parent class AbstractChannel of LocalChannel and LocalServerChannel:

For LocalChannel, you can set the parent channel through its constructor:

And in localunsafe Serverchannel will be called again in the connect method Serve method.

The last returned LocalChannel will exist as the peer channel of the client side LocalChannel.

Implementation of channel in netty

In netty, channel and Serverchannel have many implementation classes to complete different business functions.

The following figure shows the main inheritance and dependencies of LocalChannel and LocalServerChannel: 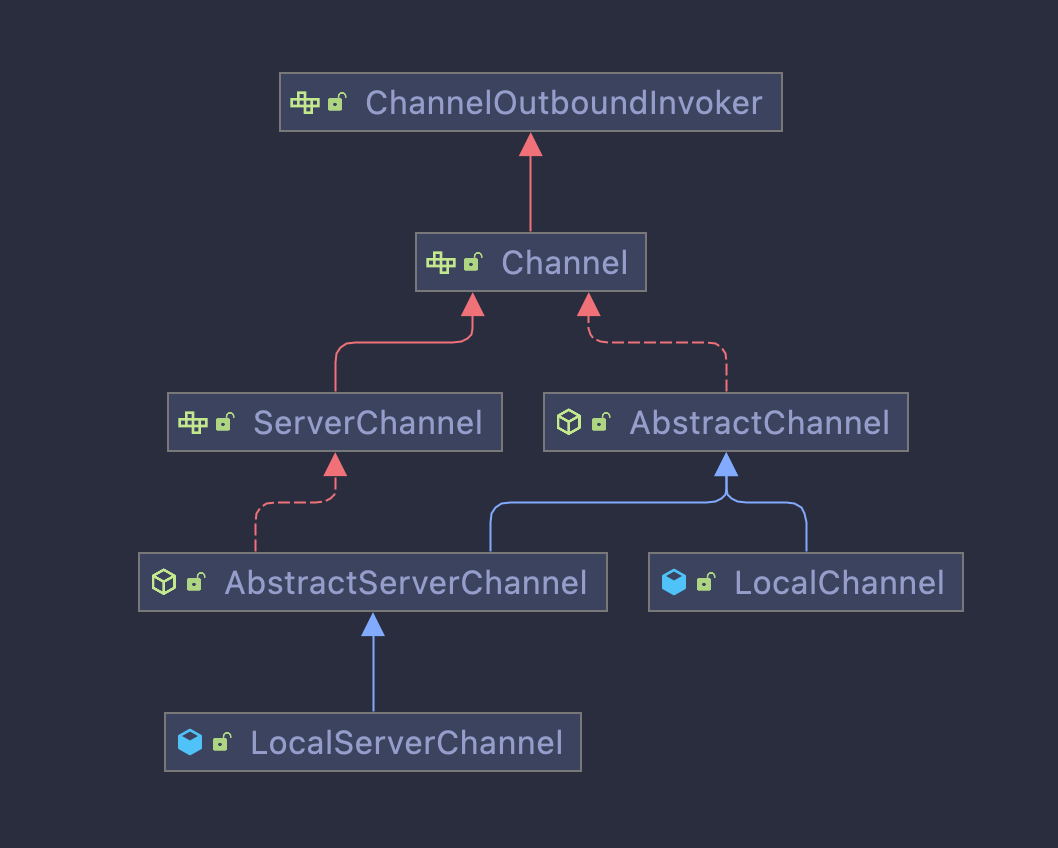 Next, we explore the underlying principle of channel implementation in netty by comparing and analyzing AbstractChannel and AbstractServerChannel, LocalChannel and LocalServerChannel.

Firstly, AbstractChannel defines some basic channel related attributes to be returned in the channel interface, including parent channel, channel id,pipline,localAddress,remoteAddress,eventLoop, etc., as follows:

Note that there is also a very Unsafe attribute in AbstractChannel.

Unsafe itself is an internal interface defined in the Channel interface. Its function is to provide specific implementations for different types of transport.

In addition, for Unsafe, the remaining methods must be invoked from I/O thread except for the following methods:

Data related to some basic states:

In addition to basic attribute setting and reading, the final methods in our channel mainly include the following:

You can see that the reading, writing and binding work in these channels are performed by the pipeline related to the channel.

In fact, it is well understood that channel is just a channel, and data related operations still need to be performed in the pipeline.

Let's take the bind method as an example to see how the pipline in AbstractChannel is implemented.

In AbstractChannel, the default pipeline is DefaultChannelPipeline, and its bind method is as follows:

So in the final analysis, if it is based on various implementations of AbstractChannel, you only need to implement these do * methods.

We know that ServerChannel and Channel are actually the same, so AbstractServerChannel only makes some adjustments to the implementation of AbstractChannel.

The first is the constructor of AbstractServerChannel:

In addition, we also observe the implementation of several methods:

For ServerChannel, there is no need to actively connect to a remote Server, so there is no remoteAddress.

In addition, because the disconnection is actively called by the client, the doDisconnect of the server channel will throw an exception that does not support this operation:

At the same time, ServerChannel is only used to establish the association between accept and client channel, so the server channel itself does not support the write operation to the channel, so this doWrite method is also not supported:

Finally, ServerChannel only supports bind operation, so the connect method in DefaultServerUnsafe will throw UnsupportedOperationException

First, let's take a look at LocalChannel, which has several extensions to AbstractChannel.

The first extension point is the addition of several channel statuses in LocalChannel:

Through different states, the channel can be controlled more finely.

In addition, a very important attribute has been added to LocalChannel:

The first is the constructor of LocalChannel:

So how was this peer created?

Let's take a look at the logic of connect in LocalUnsafe.

First, judge the status of the current channel. If it is unbound, bind it. First, create the corresponding LocalAddress according to the incoming LocalChannel.

This LocalAddress is only a representation of LocalChannel and has no special functions.

Let's take a look at the doBind method:

A static map is maintained in the local Channel registry, which stores the registered channels

Registration here is to get the corresponding channel conveniently later.

After registering localChannel, the next step is to get the corresponding LocalServerChannel according to the registered remoteAddress, and finally call LocalServerChannel's serve method to create a new peer channel:

The serve method will first create a new LocalChannel:

This constitutes a relationship between peer channel s.

Next, let's see how read and write of localChannel work.

First, take a look at the doWrite method of LocalChannel:

First, get the msg to be written from ChannelOutboundBuffer, add it to the inboundBuffer of peer, and finally call the finishPeerRead method.

As can be seen from the method name, finishPeerRead is the read method that calls peer.

In fact, this method will call peer's readInbound method to read the message from the inboundBuffer just written:

Therefore, for localChannel, its write is actually written to the inboundBuffer of peer. Then call peer's read method to read data from inboundBuffer.

Compared with localChannel, localServerChannel has an additional serve method to create peer channel and call readInbound to start reading data from inboundBuffer.

This article has been included in http://www.flydean.com/04-2-netty-channel-vs-serverchannel-md/ The most popular interpretation, the most profound dry goods, the most concise tutorial, and many tips you don't know are waiting for you to find!