1. Introduction to Q & a system

Q & a system is usually divided into:

The three are designed for different application scenarios: 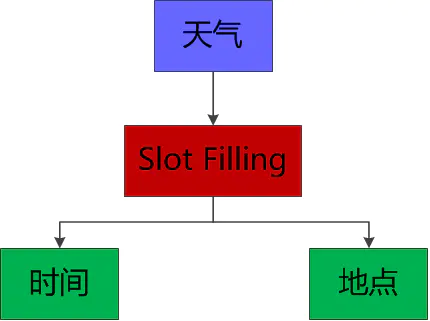 First of all, "what's the weather like in Chengdu today" is a weather question (including entity "place" and "time"), which can be answered;

Then, the sentence "what about tomorrow" only contains entity information ("time") and does not contain location information. If intention classification is directly adopted, this response cannot be completed;

For this kind of multi round conversation scenario, you can respond by slot filling (slot filling is composed of multiple slot values, for example, the weather scenario requires the entity slot values "place" and "time"). "Tomorrow" and "the day after tomorrow" only include the "time" entity, but the above "what's the weather like in Chengdu today" includes the "place" "Entity", just replace the entity below ("time") with the entity above ("time"). 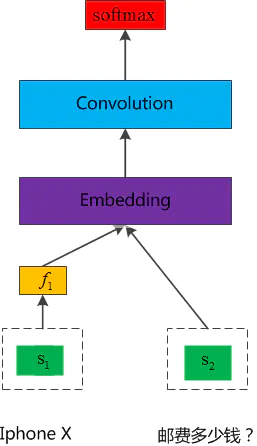 First, "how much is iphone X" can be answered by classifying the intention of a single sentence;

While "how much is the freight?" it is necessary to judge whether the freight consulted by the user belongs to pre-sales freight or after-sales freight. At this time, the intention analysis can be carried out by combining the above problems (1: extracting the intention features above and adding them to the current problem can solve some context scenario problems; 2: combining the above and current problems, the intention analysis of the context can be carried out by using the deep learning algorithm).

Finally, "can you return goods without reason" needs to know the information of the goods before you can answer the user's questions. Therefore, you need the above commodity "iphone X" (you can save the entity and commodity information in the dialogue for the following response). 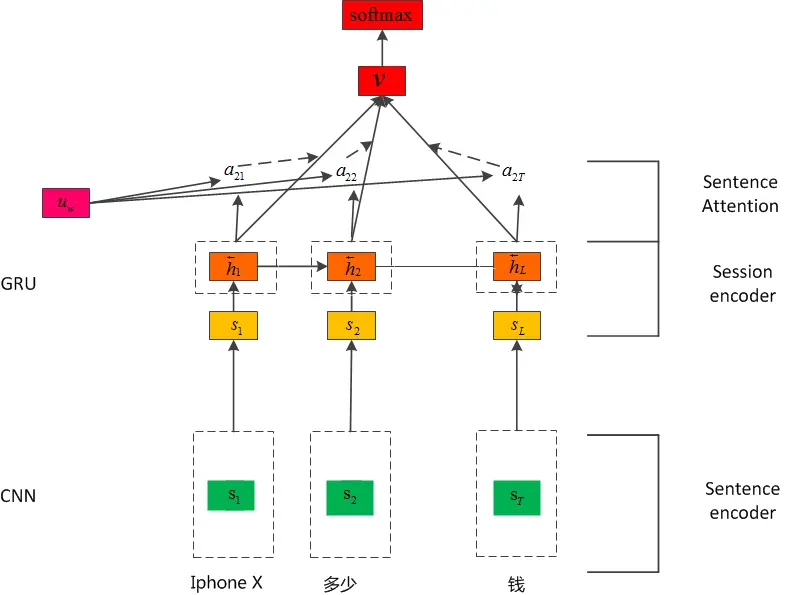 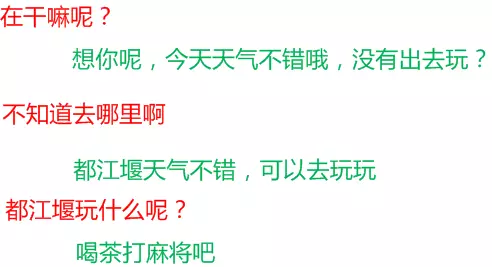 For the chat questions, because the user has no clear intention, it is not suitable for intention classification. Here, we can use the generative model to generate the corresponding answers according to a large number of chat corpus of user history (the answers obtained by the generative model may have grammar and coherence problems, but the conversation in the chat scene does not require high sentence grammar and coherence, which is relatively arbitrary) .

2. Application of context classification algorithm based on Attention mechanism in question answering system

Here we need to establish a context based classification model to judge the user's ultimate intention combined with the above information.

There are two common methods:

This article mainly refers to the Hierarchical Attention Networks for Document Classification , this paper introduces the application of attention mechanism in English text classification. This paper adopts document level classification, that is, document is composed of sense, and sense is composed of word, so it naturally has hierarchical relationship. Taking word as granularity input network, word level features are extracted to obtain the feature vector representing sense, and then the sense level vector is input into the network to extract sense level features In order to assign different weights to different words and different senses, this paper designs a hierarchical attention mechanism to improve the performance of the model.

When designing the context model, this paper makes a slight modification, takes the single sentence in a session as the input of the first layer, and then takes the features extracted from each single sentence in the first layer as the input of the second layer, so as to obtain the final session level feature output. Attention mechanism is not popular recently, and is widely used in nlp and image processing. Here, it is also after the feature extraction of the first layer , an attention layer is designed to extract the features of sentences more accurately. However, after the feature extraction in the session layer, the same attention is not designed, because in the dialogue system, the closer to the current sentence, the more important the sentence is. Therefore, here we extract the final output of the time series model as the final feature.

The design diagram of the overall algorithm is as follows: 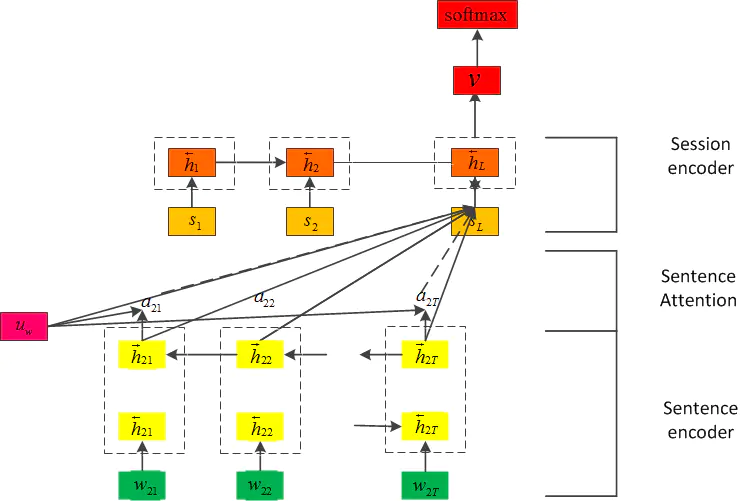 When processing Chinese, the accuracy and speed of LSTM network are worse than CNN network. Therefore, the network structure of this paper is adjusted and the LSTM network in the first layer is replaced by CNN network. In this paper, the Attention mechanism is added to both layer 1 and layer 2, but it is found that the effect of adding Attention to layer 1 is not improved, so Attention is only used in layer 2. After the integration of CNN and LSTM, the whole network structure has become very complex, and GRU is a simplified version of LSTM. GRU is more effective when there is less corpus. Therefore, GRU is used to replace the LSTM of the second layer network, that is, there is the final model H-CNN-GRU network: 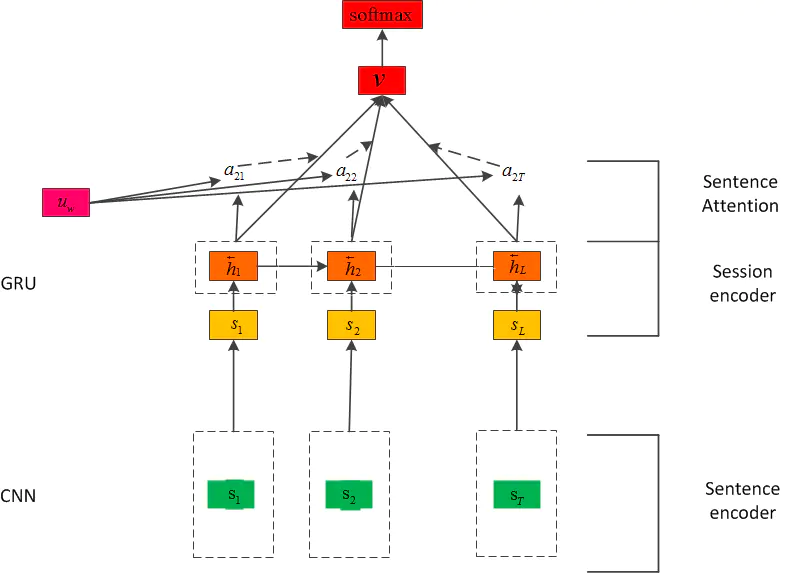 2: Since the GRU/LSTM with fixed length is used in this experiment, the questions and answers need to be truncated (too long) or supplemented (too short).

5: For the problems contained in all sessions in a batch, the GRU/LSTM model is used to calculate the characteristics.

1) : in the first layer, fixed length sentences are used for feature extraction of single sentence problems, and two-way dynamic rnn is tried, which does not improve the effect, and the calculation speed is relatively slow.

7: The single sentence level feature output of the first layer is used as the input of the session level encoder of the second layer.

1) : here, dynamic rnn is used for feature extraction, because the problems contained in each session are not fixed.

2) : instead of bidirectional rnn, unidirectional rnn is used, and attention and AVG are not added_ Pool or max_pool, because the closer to the current sentence, the more important it should be.

7: The characteristics of the model output are linearly transformed.

8: For multi class text classification, the output of linear transformation needs to be passed through softmax.

1: Here, the optimization function adopts Adam used in the paper (SGD has been tried, the learning rate is 0.1, and the effect is poor).

4,embedding_ The size is 150 dimensions.

7. The question length is limited to 60 words.

9. Each level of feature extraction in this algorithm only uses a single layer. Due to the time-consuming calculation, it does not try the way of different levels and multiple levels.

10. Dropout is 0.5 (dropout is executed at both input and output, and the effect is poor in a single dropout experiment)

3. Build a query and answer system based on retrieval

dev-v2.0.json: this data contains the pair of questions and answers, which exists in JSON format.

Understanding the data is the first step of any AI work, which requires a more intuitive understanding of the data on the opponent. 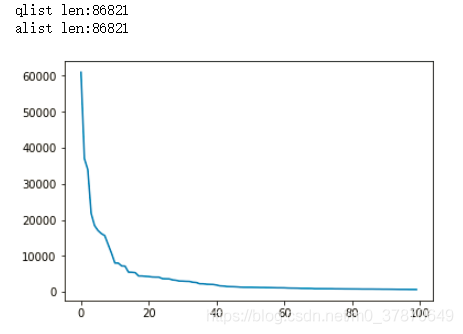 For qlist, alist performs text preprocessing. The following operations can be considered:

Please note that it is not necessary to follow the above order. Think about the specific processing order, and then choose a reasonable order

The presentation method of TF IDF is used here, and the package provided in sklearn is used here.

2.6 for the user's input questions, find the questions with the highest similarity of top 5, and return the five potential answers

The biggest disadvantage of the above algorithm is that each user problem needs to calculate the similarity with all the problems in the library. Assuming that there are many problems in our library, this will be a very inefficient method. One solution is to find a problem description similar to the current input from the library by inverted table. Then do the cosine similarity calculation for these candidates. This will save a lot of time.

The methodology used above is based on the bag of words model.

Such a methodology has two main problems:

Word vectors need to be downloaded: https://nlp.stanford.edu/projects/glove/ (download glove.6B.zip) and use the word vector with d=100 (100 dimensions).

Read the embedding of each word. This is the matrix of D*H, where D is the size of the dictionary and H is the size of the word vector. How to express the sentence vector given by us for each word? Among them, the simplest way is the sentence vector = the average of the word vector (appearing in the question sentence) , if a given word does not appear in the dictionary, the word is ignored.

2.9 for the user's input questions, find the questions with the highest similarity of top 5, and return the five potential answers

Optimization: use ES and its own TF-IDF