It's so long. I'll optimize the structure with the main and sub headings when I'm free

[overview]
In the previous lesson, we saw different built-in classes. These classes include Scanner class, String class, and some original data type classes, such as integer and double, Integer.parseInt(), Double.parseDouble()

[Primitive types]
There are eight raw data in Java, which are int, byte, short, float, double, Boolean, char and long
When we declare these original types of variables, a fixed size of memory will be allocated to store the values. The fixed memory allocated by each type is different
In short, it is
Raw data types are limited in size and flexibility

Array array
Array is a powerful way to extend the original data type - it allows us to collect variables of the same type under a single variable name, and we can also make arrays of any length
But even for arrays, they can only do the corresponding things for us, and can't do things beyond the scope of its rules

String Strings
A string is an example of the reference type reference type
After declaration, memory will not be allocated to the string until initialization
String type is more powerful than array because it can hold values of any size. String provides methods that can interact with "values", such as String.length()

These (Scanner, String, Integer) are built-in classes in Java. We can also create Java classes to perform specific user-defined tasks

We can think of a class as a template

Let's take a car as an example. For all vehicles, they generally have:
Specific types of motors, colors, a certain number of doors, etc

In addition to having attributes, each class can also perform some user-defined tasks, such as the above car:
We can not only encapsulate the description of the car, but also encode the functions related to the car
The code we can write to capture car properties and functions is called class
In addition, we can also use other objects as attributes

[composition of classes]
1. Class name A class name
There is a convention in writing: the class name should start with a capital letter and be a noun
2. Attributes, instance variable attributes
These variables are used to hold values inside the class, and other objects can also be used as properties
3. Constructor(s)
There should always be a default constructor. This type of constructor has no input parameters. If it is not provided, the JVM will automatically provide one
The constructor name is the same as the class name
4.Getters method (also known as Accessors)
These are user-defined methods that return the values of those properties in the class
5. Changers Setters (also known as Mutators)
Methods for setting and changing property values in classes
6. Functions in the form of methods
There are some methods with special functions

[Object]
An object is an instance of a class and can be considered to be used like any variable
For example, when using the Scanner class, we can create objects of this class by writing the following
Scanner sc= new Scanner(System.in);
After creating the corresponding object, we can use its function. Now we have an instance of Scanner class in our program

[create an example of Class]
Let's start with an example of a java class representing car. Our class, called car, will have the following properties: number of doors, vehicle type and color. We may want a method called printcarddetails () to print these properties
So we got the following class 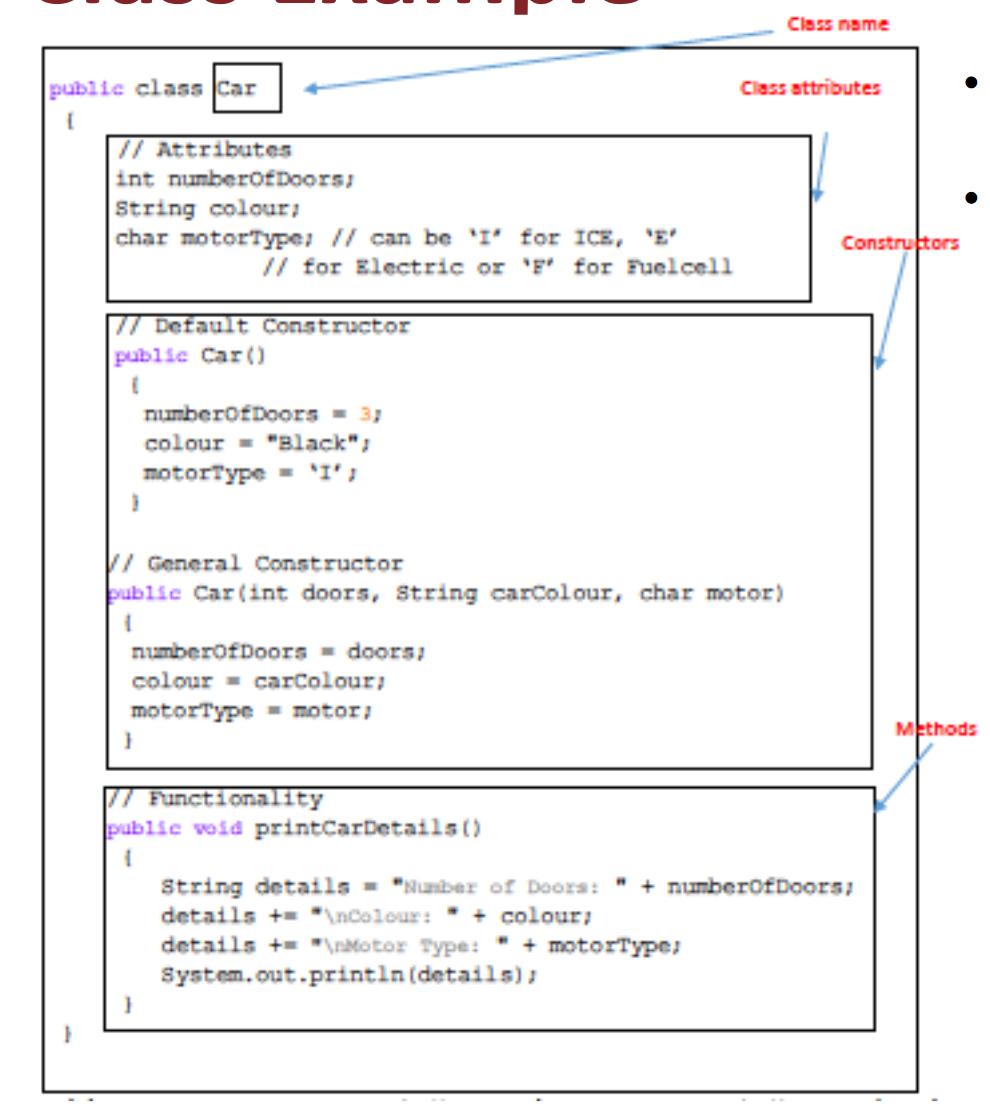 Note: there is no main method in our class. In the main() method (in another file), we can create the object of Car class like the object of Scanner class
For example:

[summary]
The key is to accept the idea that "class is a template". In this template:
We can define the attributes of a kind of things, such as Human height, weight, gender and so on
We can operate these attributes, that is, there are methods. For example, if a person loses weight and we want to change the attribute value of his weight, we can define a "change weight" method to use
We can give the things generated by this template to other parts. For example, I have a method of driving a vehicle, CarDriver, which needs to input a Human type parameter as the driver
Then we can give an object generated by Human to the method

[array of objects]
Continuing with the previous example, we now want to create multiple cars in our program
One and two are OK. If we want to create multiple car s, it will be very complicated and chaotic to instantiate them respectively one time, so we have array objects
Using arrays to store objects of the same type helps simplify operations
As we said earlier, we can treat a class as a property that stores values -- just as we use int, double, etc., so the use of array objects is the same as the use of arrays before

Again, previously, our int, double, etc. are also types. They are the default types in Java, and they can be stored in arrays
Then our user-defined class is also a "class". Of course, the objects instantiated by it can also be stored in an array

We mentioned six parts of the class before. Let's talk about several parts in detail below:

[Constructors]
A constructor is a special type of method that is called when the new keyword is used with an object
They have no return type (not even void) and must have the same name as the class
Typically, we have a default constructor (usually without parameters) and at least one other constructor with one or more parameters
Let's review Car:
This is the default constructor. In this constructor, we usually preset various values

This is a constructor with parameters. When the user writes the corresponding parameters, the user-defined object will be created

[Accessor and Mutator Methods]
Accessor accessor methods are used to return (get) property values. They are also called getter methods
The changers Mutator methods are used to change (set) property values, also known as setter methods
The Accessor and Mutator methods provide users with a way to accurately interact with the data in the class
The accessor is responsible for allowing the user to get the corresponding value, and the modifier is responsible for setting and modifying the value

Still take Car as an example. The color of our Car can be obtained by the following method:

Note that the access method has zero input parameters and has a return type. After all, the accessor is used to obtain the corresponding data, and there must be a return value
Since the method is public, any class can call it

Let's take a look at an example of the changer Mutator, which will change the color of the car:

In contrast to an Accessor, the Mutator method takes one or more parameters and always has a void return type. Because its responsibility is to modify, it needs to accept the modified value, but does not return the value