Object Pool Pattern is a kind of creative design pattern. After objects are created and initialized in advance and put into the object pool, the object provider can use the existing objects to process requests, reducing the memory space and initialization time occupied by frequent object creation.
An object pool contains a set of objects that have been initialized and can be used. Objects can be created and destroyed when needed. Users of the object pool can get objects from the pool, operate them, and return them to the pool when they are not needed, rather than destroy them directly. Object pool is a special factory object. Object pool mode is singleton mode plus meta mode.

The object pool mode is mainly applicable to the following application scenarios.

(1) Resource constrained scenarios. For example, in an environment that does not require scalability (CPU \ memory and other physical resources are limited), CPU performance is not strong enough, memory is tight, garbage collection and memory jitter will have a great impact, so memory management efficiency needs to be improved, and responsiveness is more important than throughput.

(2) A limited number of objects in memory.

(3) To create objects with high cost, you can consider pooling.

The UML class diagram of the object pool pattern is shown in the following figure. 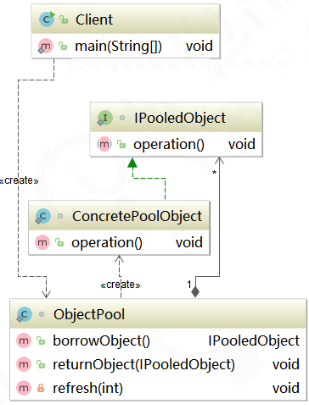 As can be seen from the above figure, the object pool mode mainly includes three roles.

(2) PooledObject: the abstraction of objects in the pool.

The following is a common way to write the object pool pattern.

Reuse the objects in the pool to eliminate the memory overhead, CPU overhead and network overhead caused by creating and recycling objects.

(2) In a concurrent environment, multiple threads may need to acquire objects in the pool (at the same time), and then need to synchronize on the heap data structure or block due to lock competition. This overhead is hundreds of times higher than the overhead of creating and destroying objects.

(3) Due to the limited number of objects in the pool, it is bound to become a scalability bottleneck.

(4) It is difficult to reasonably set the size of the object pool. If it is too small, it will not work; If it is too large, it will occupy high memory resources.

Focus on WeChat's official account of Tom architecture and reply to the "design pattern" to get the complete source code.

[recommendation] Tom bomb architecture: 30 real cases of design patterns (with source code attached). Challenging the annual salary of 60W is not a dream

This article is the original of "Tom bomb architecture". Please indicate the source for reprint. Technology lies in sharing, I share my happiness!
If this article is helpful to you, you are welcome to pay attention and praise; If you have any suggestions, you can also leave comments or private letters. Your support is the driving force for me to adhere to my creation. Focus on WeChat official account Tom structure, get more dry cargo!