On the principle and practice of VMware network connection mode

After vmware is installed, these two network services will be installed on the host by default. DHCP is used for IP allocation and NAT service is used for address translation. It is only required in NAT mode.

VMnet0, VMnet8 and VMnet1 in Vmware
In the NAT connection mode, VMnet8 acts as a virtual router, the ensxx network card of the virtual machine and the Adapter of the host machine   VMnet8, NAT device and DHCP server are all connected to the router by default.
VMnet1 is used in host only mode, which is different from NAT mode,   This mode does not forward virtual machine requests to the external network. 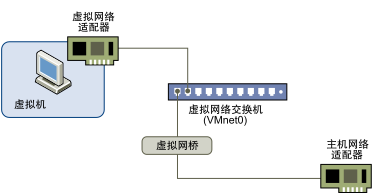 Practice (Bridged mode construction)
For example, the following is the relevant information of the host wireless network card 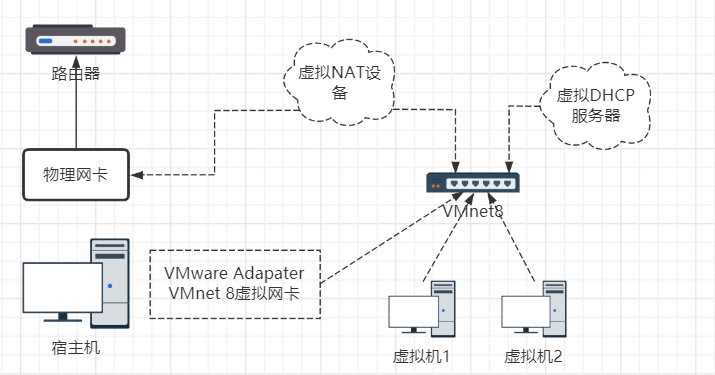 Several characteristics of NAT mode can also be seen from the figure:

Practice (NAT mode construction)
The construction of NAT is very simple. Just cut the grid mode into NAT, but pay attention to several points
1. Pay attention to the firewall status, which may result in mutual ping with the host.
2. If there is a switch between bridge mode and Nat mode, it is recommended to restore the network, or modify the ifcfg-ens33 file, and then restart the network to avoid mutual influence.
2. It is recommended to modify the / etc / sysconfig / network scripts / ifcfg-ens33 file. It is best to manually configure GATEWAY. If it is not configured after testing, the external network cannot be accessed in some cases.

The purpose of the default IP address is as follows

The operation steps are as follows:
1. Set host only mode
2. Shared network 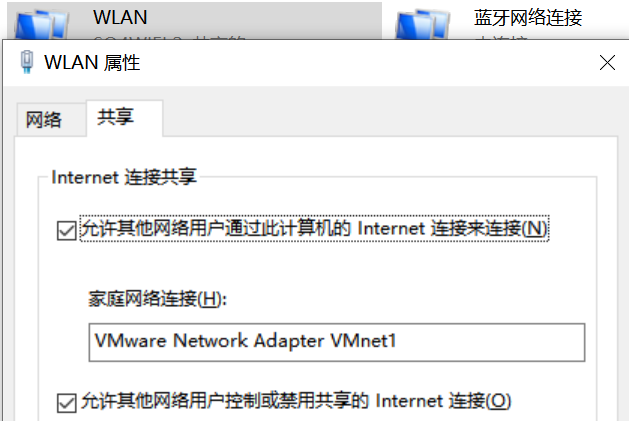 3. Manually set the address of Adapter VMnet1 on the host.

4. Set the virtual machine ens33 network card gateway and point to the IP of Adapter VMnet1.