On the problem solving strategies of OL digital problems

I wrote earlier about the mathematical problems in the linguistics competition On base system in language from Ndom language Has simply said a little, but did not do a detailed problem-solving analysis. Later, I always planned to write a blog post to roughly analyze the problem-solving ideas of such problems, but I haven't had enough time to write it (in fact, I don't have 2333 now). This week just @ Huizi mentioned it, so I'm sorry to keep dragging on and update it slowly. Now let's start with a simple question. 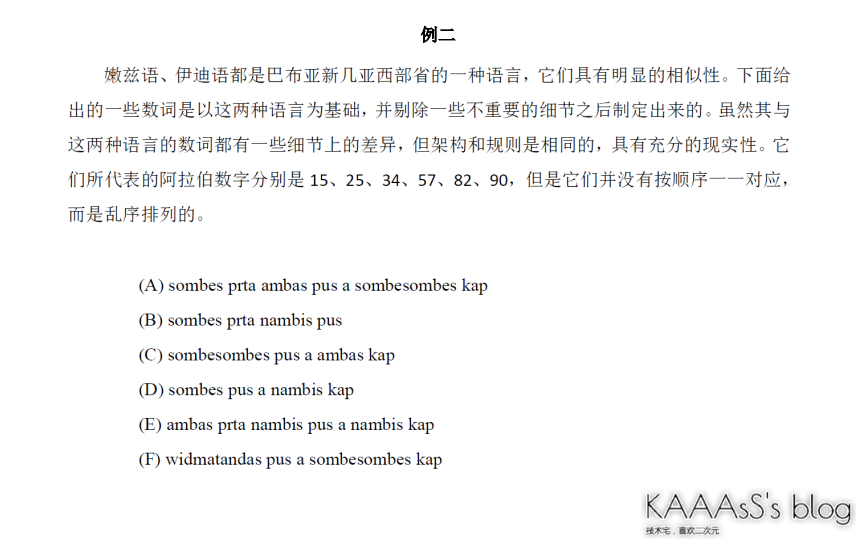 When you get the title, you should first notice that the information in these words is more important. More information entropy theory, with a particularly high frequency, is generally not information with a large amount of information. prta, pus and kap all appear very ordinary, so it is speculated that these words should not represent any figures. Next, we need to determine the base and pronunciation of the language, so we make statistics on the beginning and end of the word:

Obviously not decimal. Generally, languages that appear in linguistic competitions, even IOL, generally have some different "physique" of "people". Due to space constraints (in fact, you are too lazy to calculate ← it's obvious that you calculate mathematica ← shut up) only 6-8 decimal numbers are listed here:

Obviously, only hex matches (only 5 numbers also hint at us), and we make sure that the numbers are read from left to right by the way. The numerical table is as follows:

ambas 1 (guess, the same reason as 4) sombes 2 (first 3 occurrences) Sombes sombes 4 (it is obviously a deformation of sombes. It is reasonable to guess 4 between uncertain 1 and 4. The accuracy of the guess can be proved by observing all the figures) namhis 3 (there is no tail at the beginning, which occurs 3 times. Note that when the last bit is 0, we can assume that the last bit may not be 0, but the last non-0 bit) widmatandas 5 (head with tail without)

Moreover, through this table, we not only get all the digits, but also find out the representation of carry. "somhes prta namhis pus" (only 230 ends with 0, and only the word ends without kap) means 230. Then it can be guessed that pus represents ten bits, and a bit is likely to need kap tail. There are three "hundreds" in all numbers, including three prta, so prta should be the sign of hundreds.

Let's write the title below. The first question should be very simple to speculate about the current situation. The table above shows:

Translation of the second question, according to the rules:

Look at the answer again, panic.

First, there is a before sombes of 11. Brother, isn't there nothing in your question (9)? Why is it here again? Secondly, why didn't there be a kap at the end of 12 and 13? In the title, sombes and ambas are also at the end of a and C, but kap is added. Besides, there is no reason (I can't see it anyway) not to add kap. Sure enough, I'm not good enough. About this question, we have asked the NOL Organizing Committee... Well, come and update as soon as you have a reply. -– According to the reply of the organizing committee, it seems that the problem is the subject. In short, our reasoning should be correct.

According to the routine of 5.3, a good friend and teacher of the people, let's analyze the question types of this kind of questions:

To be continued ← not necessarily