On time atom Lora module tutorial based on stm32

In short, LoRa is a low-power remote wireless communication technology. It is a wireless data transmission module developed based on SX1276/1278 chip of Semtech company. This chip has small integration scale and high efficiency, so that LoRa module has high receiving sensitivity. So what are its advantages over our commonly used Bluetooth and WiFi? In summary, it is low power consumption, long distance and anti-interference. Under the same conditions, the transmission distance of LoRa module is longer than that of WiFi module. The common short-range wireless communication technologies such as WiFi and Bluetooth have a communication distance of only about tens of meters. If you want to cover the network of a certain region and a city, the deployment cost will be very high and not cost-effective. As a low-power wide area network LoRa technology, the wireless communication distance can reach several kilometers or even more than ten kilometers, which is much farther than WiFi module. These advantages make LoRa widely used in the current Internet of things and have developed rapidly.

The LoRa module used in this tutorial is ATK-LORA-01 of punctual atom. The physical picture is as follows: 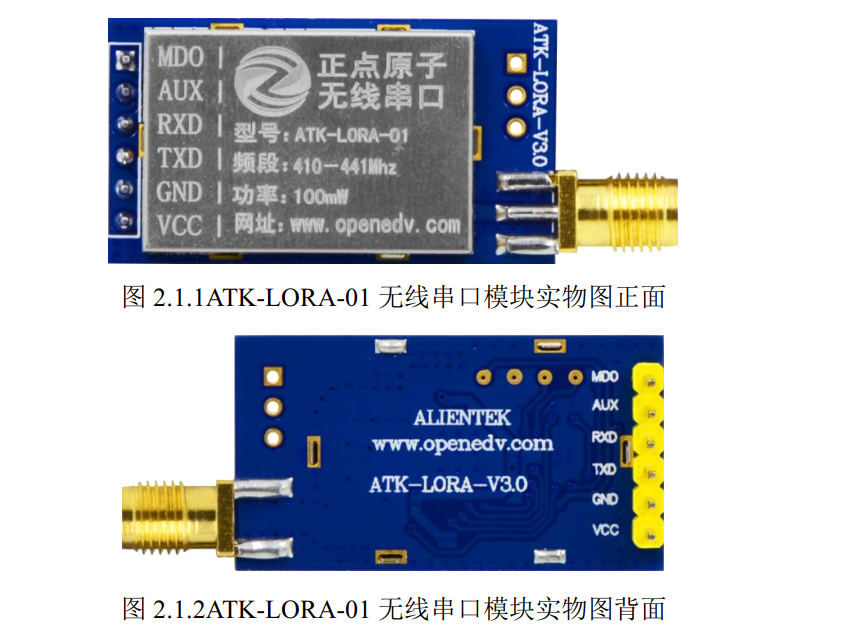 At the beginning, when I got it, it was a wireless serial port. Write about the serial port data sending and receiving, and it should be adjusted soon. But it took me a whole day to finish up and down, and of course it was due to the stinking routine and the user manual that did not understand the key points. I think you can use these modules directly. The program should be very convenient to transplant, but it's not on time. You have to add all kinds of display screens and peripheral modules in the program, and then write some complex programs. So I went online to refer to other people's programs. Combined with my own debugging experience, I rewritten the program of LoRa module, which is very convenient for transplantation.

When you get a module, you must read the user manual and data manual before programming. You must know how to use it first. I'll post some important parts of the materials given on time (related to programming modules) here. Readers can refer to the manual if they have other needs.

The first is the pin function description: in addition to the four common pins of the serial port, there are two more pins. Referring to its description, we can conclude that these two pins are used to configure module communication. Because they are wireless serial ports, it is certain that the two modules must have the same configuration to communicate.

The following is the description of these two configuration pins, which is related to how we make the module in different working states: obviously, when AUX and MD0 pins are at low level, it is the communication function of the module (that is, the two LoRa modules send and receive data from each other). When we first pair it, we need to enter the configuration function. At this time, we need the MD0 pin to be high. Then we know from the manual that MD0 and AUX pins are low when suspended.

In other words, after we have paired the two modules, we can not connect the wires of MD0 and AUX pins, let them hang at a low level, and the two modules can communicate. In this way, it is basically no different from the serial port, and the program will be simplified accordingly.

So how to pair the two modules? My personal suggestion is to connect a USB to TTL to the computer, and then set it with the upper computer provided on time. In this way, we can not care about the writing method and meaning of AT instructions, and achieve the fastest start-up and use LoRa module. Here, after the connection is completed, modify the basic parameter configuration of the module. The working mode configuration and sending status remain the default first. In the module parameter configuration, the two modules must be consistent. I personally suggest that the communication channel and module address can be modified to reduce interference (just in case). 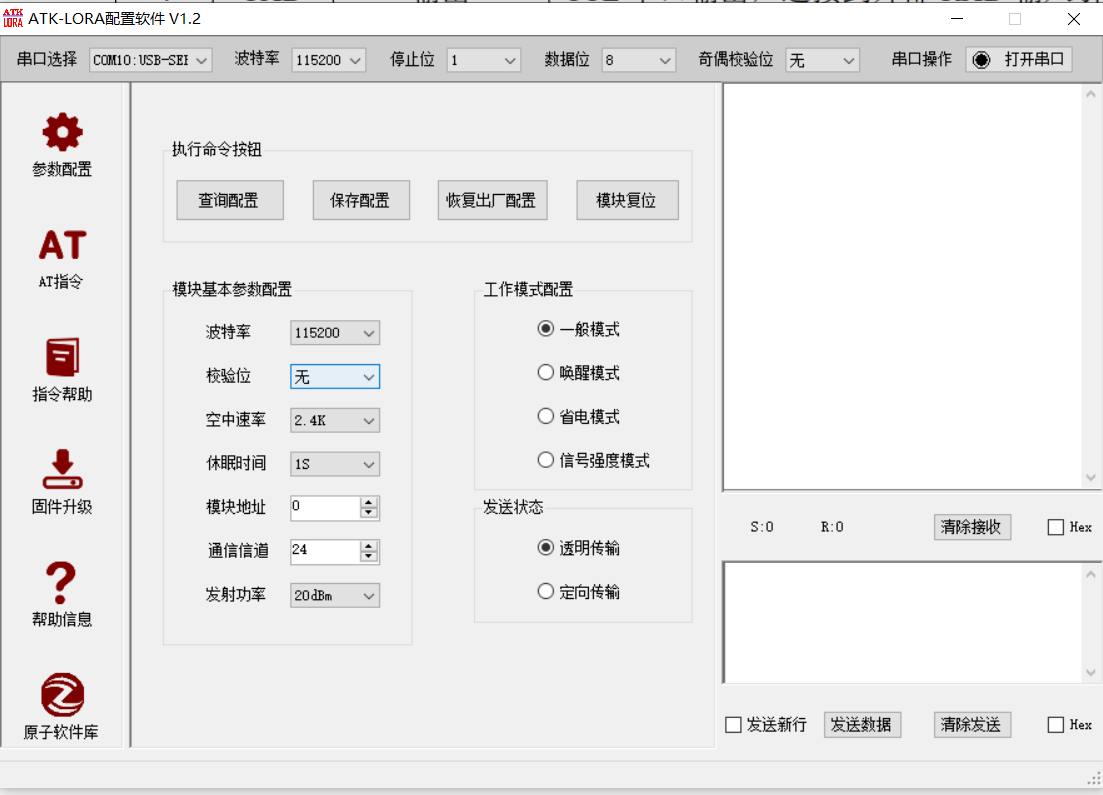 Once our modules are paired, the programming logic is very simple, just the receiving and sending of serial port. Of course, we can write operations such as module configuration in the program, but imagine that we need to connect two pin lines and write a lot of logic control. Why not pair it first and then use it as a serial port?

My purpose here is to enable stm32 and computer to realize wireless communication through two LoRa modules, and both can display the received and sent data. The MCU side allows LoRa to use serial port 3, and then prints the data at the receiving end of serial port 3 on the computer through serial port 1.

When porting a program, you only need to use USART h,usart.c,lora.h,lora.c can be included in your project. You can also transplant only Lora C and Lora H then modify serial port 3 to the serial port you use. (compared with the complex and huge project on schedule, I think these modules are still so easy to use) 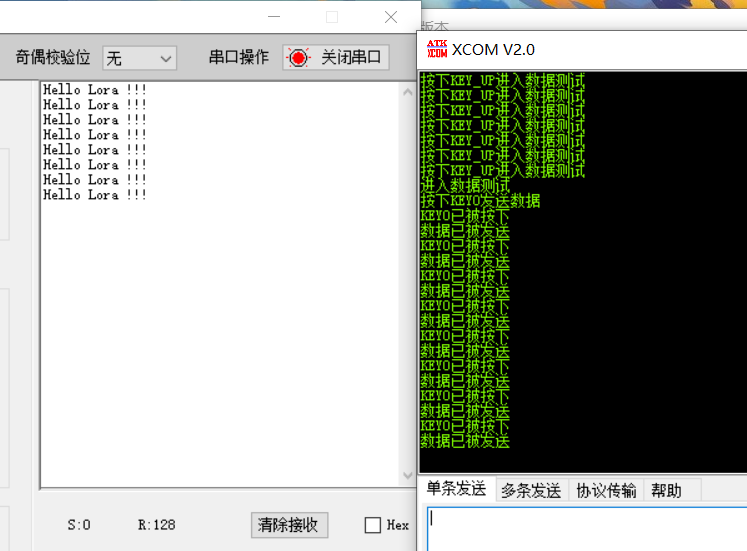 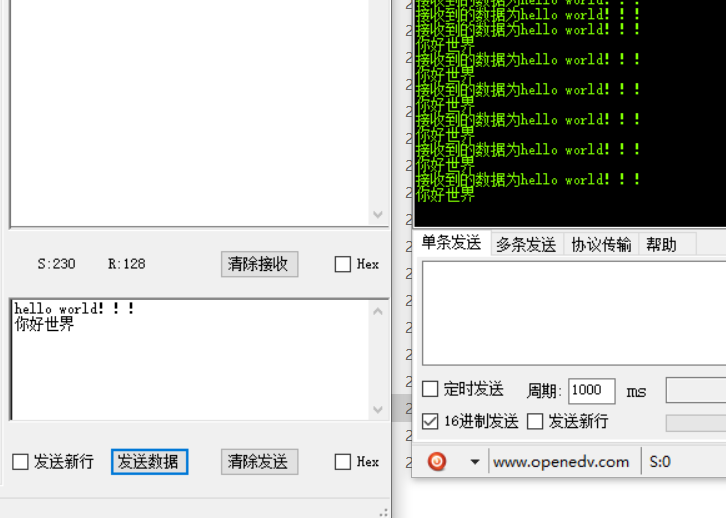 I can get the complete project code and the private chat with LoRa configuration code. Help everyone get started and use LoRa quickly!