The phenomenon of CPU soaring is very common, but in fact, it is not particularly complex to find and solve it. Here are some common cases of CPU soaring, and the solutions and relevant troubleshooting and solving processes are given.
Before analysis, review several knowledge points:

CPU performance index:
load average: load. When viewed by linux, it is usually displayed as follows:

It represents the average load of the system for 1 minute, 5 minutes and 15 minutes.
The analogy of image can be referred to Understanding Linux CPU Load - when should you be worried? | Scout APM Blog
Another figurative metaphor: CPU load and utilization are indistinguishable - Yunxi blog Park (cnblogs.com) 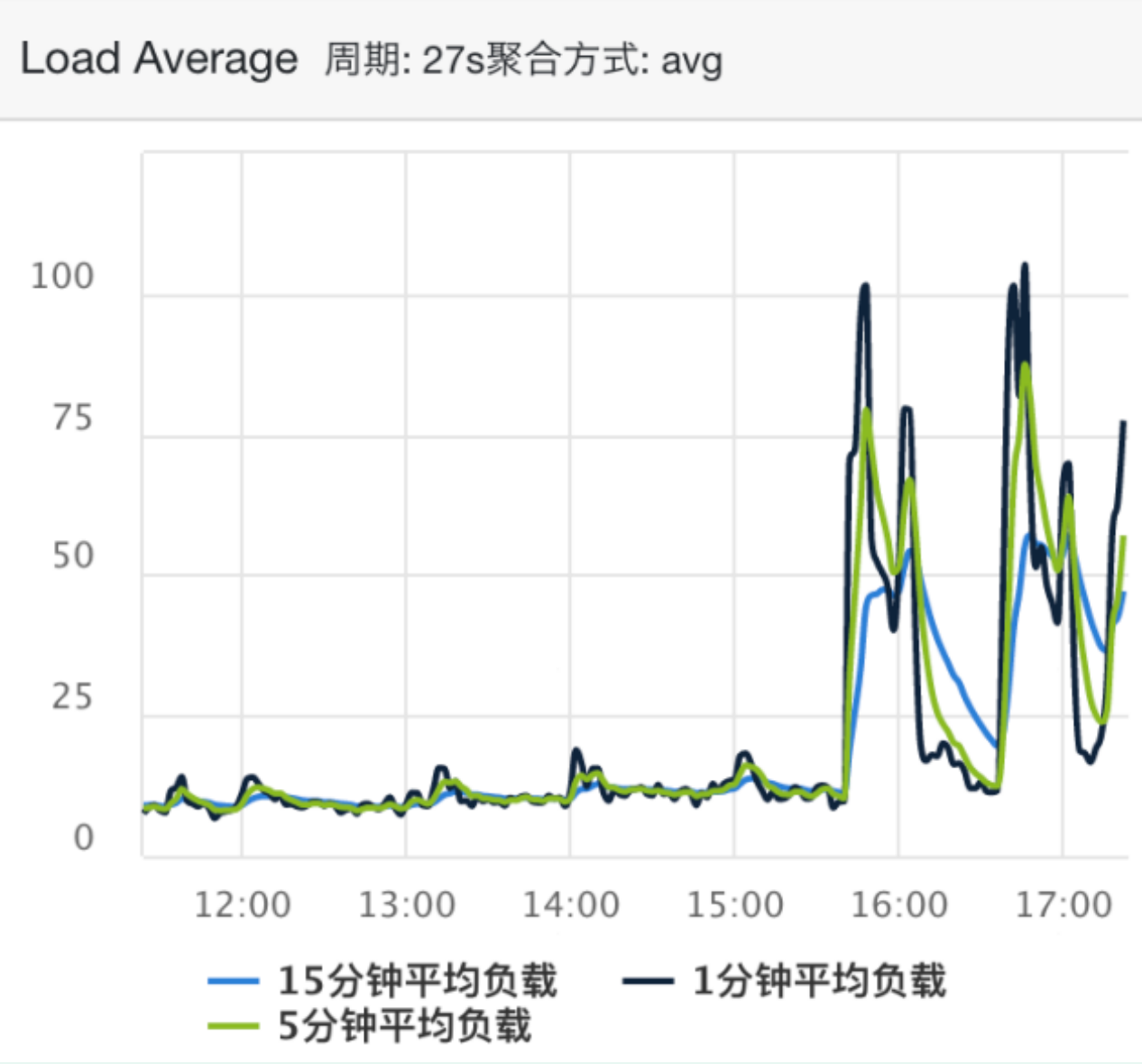 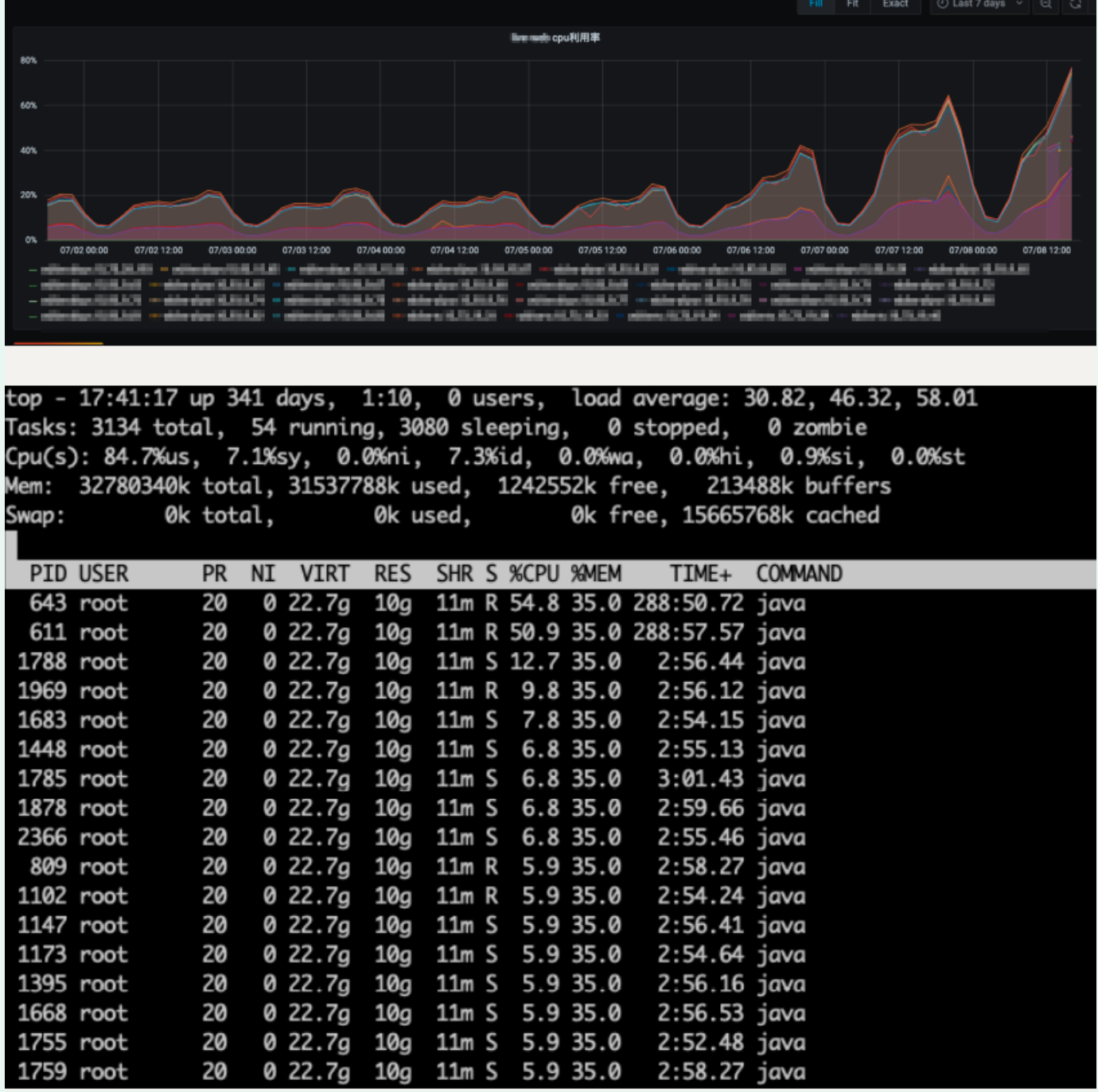 2. Analysis stage
According to the analysis of thread dump file, mainly whether there is deadlock and blocking, as well as the occupation of CPU thread, analyze
The tool adopts the online fastThread tool. Address: https://gceasy.io/ft-index.jsp
(1) View the number of threads
It can be seen from the data diagram that there are 3000 waiting threads created, suggesting that the number of high-line threads may lead to abnormal memory leakage, which may affect the creation threads of subsequent tasks. 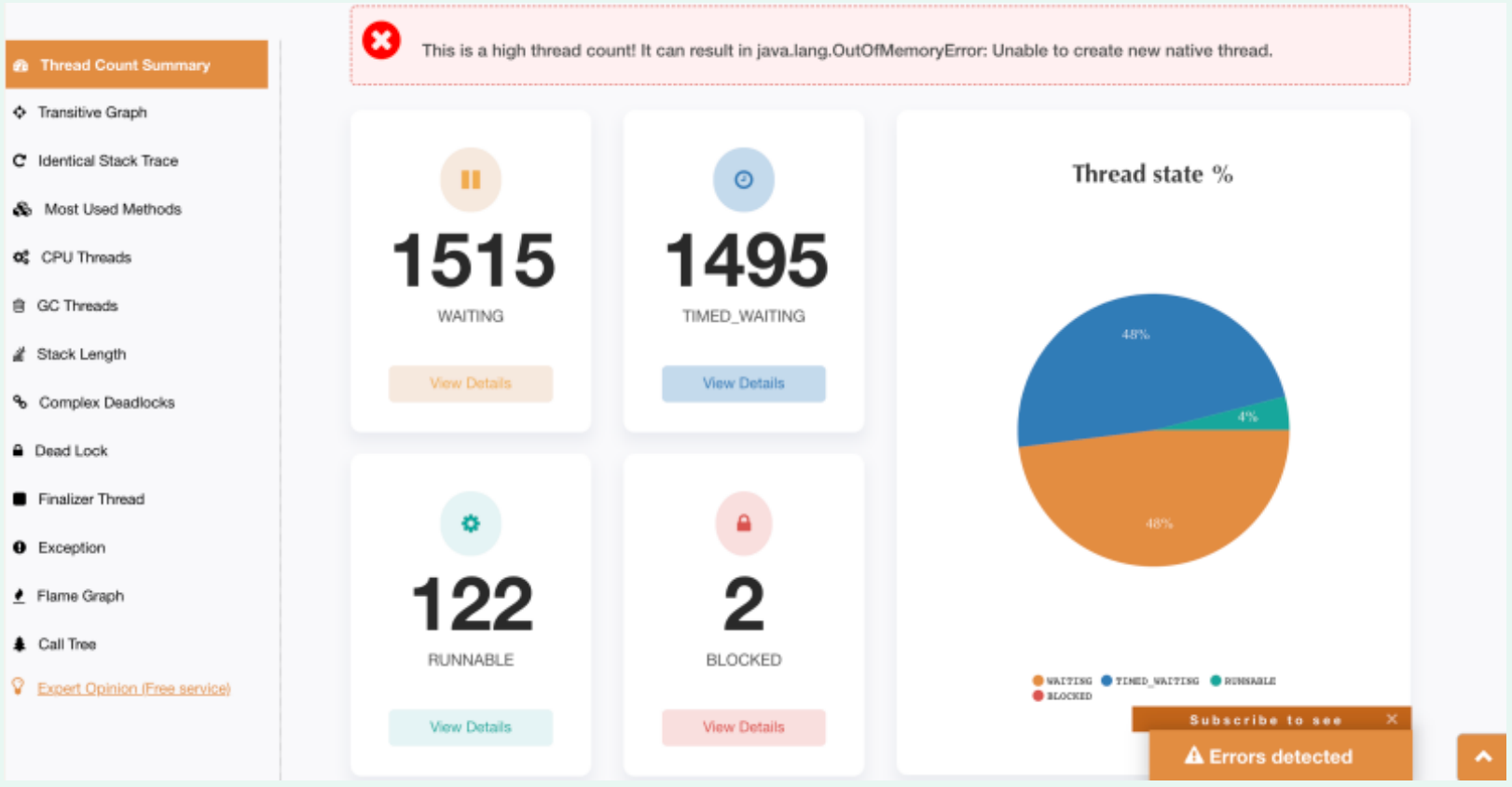 (2) View current CPU thread usage
According to the CPU threads, query the thread stack list that the CPU is executing, and you can find that most logs are similar to catalina-exec-879 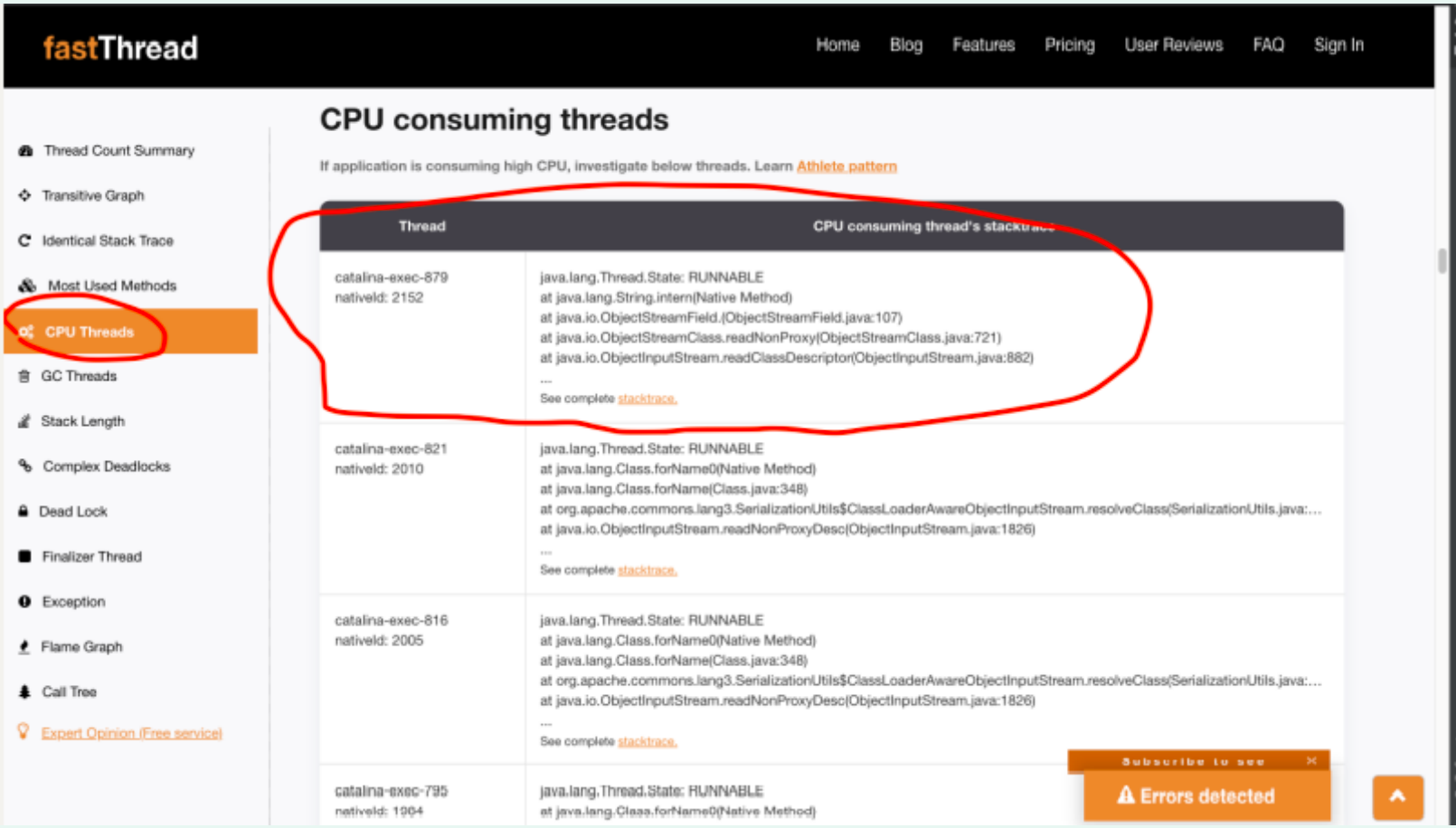 (3) Locate the problematic thread stack
View is a piece of code logic of the new avatar circle, in which there is a step that needs to deeply copy the object for future logic changes. 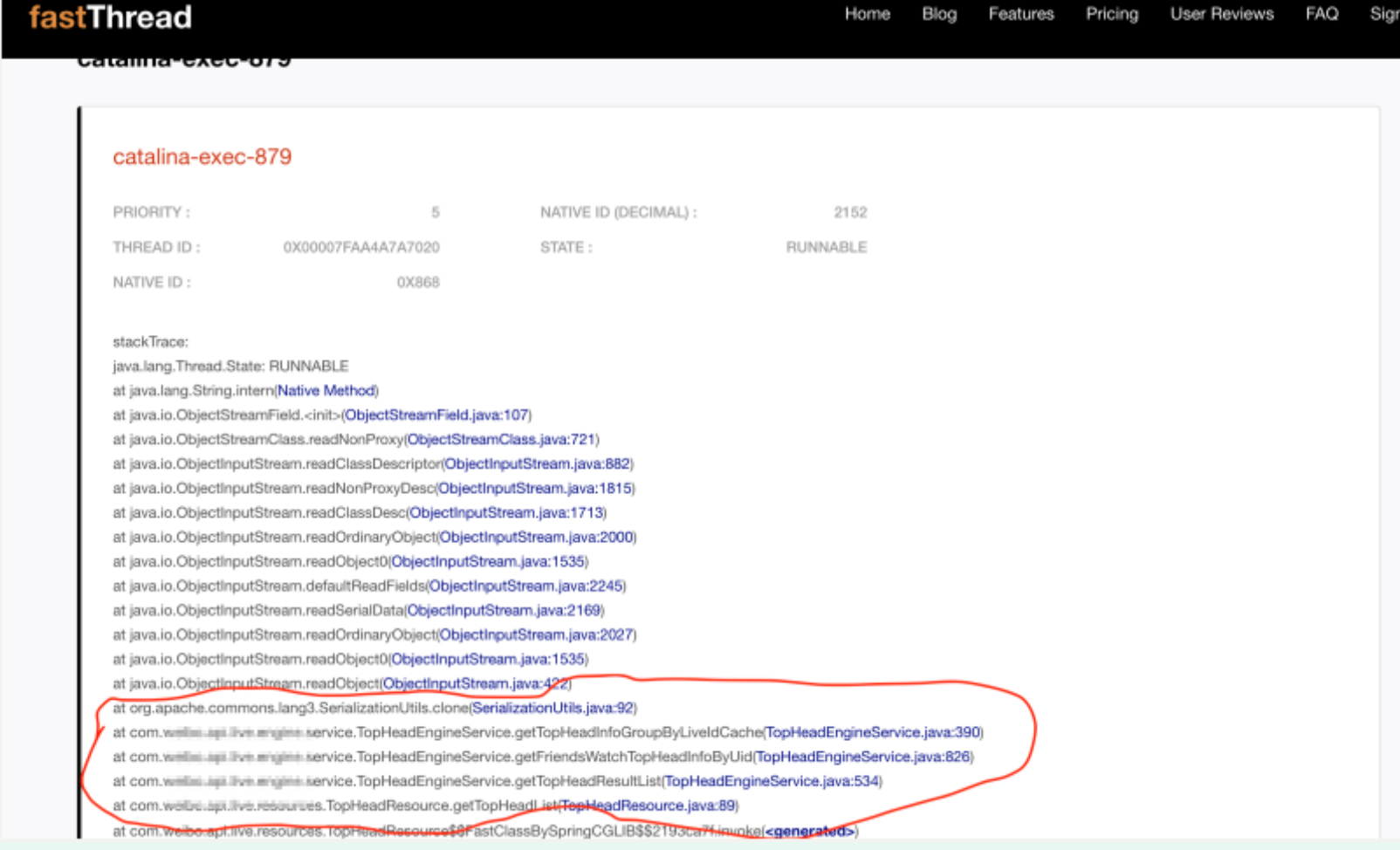 3. Problem recovery
Therefore, it is speculated that it may be related to the opening of a group of white list rule users on the 8th, so the white list policy configuration of changing config is temporarily adopted to reduce the gray-scale user range. After configuring push, CPU utilization returns to normal.
Adjusted machine CPU utilization: 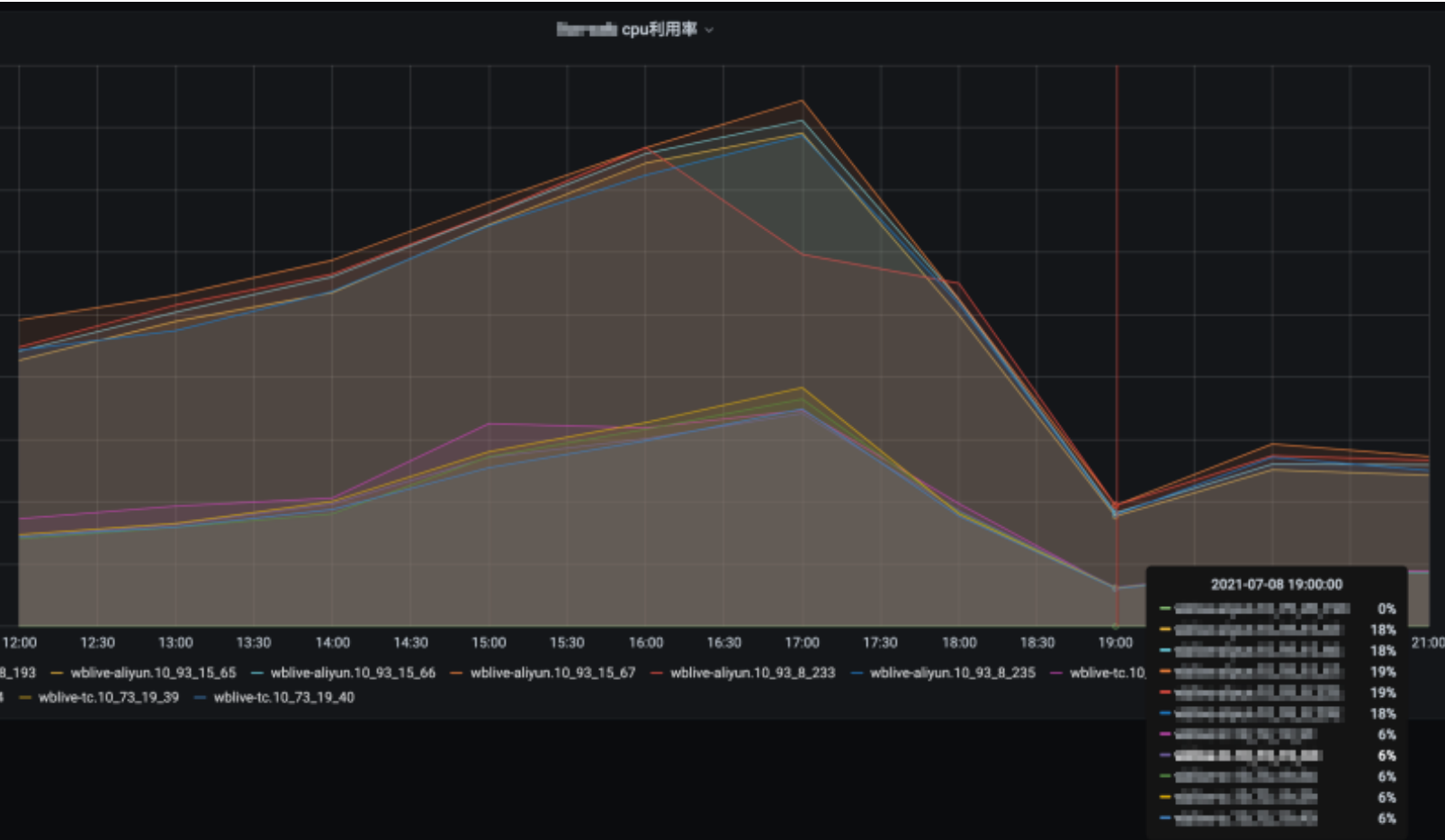 The average CPU utilization of the service pool is as follows:

The methods that affect performance are the object cloning tools provided by Apache commons Toolkit:
SerializationUtils. Clone (entry. Getvalue()), the basic operation is to use ObjectInputStream and ObjectOutputSTream to serialize first and then send serialization. Cloning is frequent and time-consuming, which takes up the execution of other tasks.

Source code comments:
Use serialization to deeply clone an object. This is many times slower than manually writing cloning methods on all objects in your object graph. However, for complex object graphs, or objects that do not support deep cloning, this can be a simple alternative implementation. Of course, all objects must be serializable.

5. Optimization scheme
After discussion, the method of creating objects and setting properties is temporarily adopted for object replication, and the object serialization tool is not adopted first. Implement Java Lang. clonable interface and implement the clone method.
The main object copy codes are as follows:

7. Problem summary
For the interface with relatively large flow, pressure measurement and analysis can be done in advance;
After going online, regularly check the online operation by monitoring the market, and pay attention to the machine monitoring alarm, so as to find problems in time;
In case of alarm or abnormal CPU or memory usage found in the market, the thread stack log can be printed to help analyze the thread usage through the stack analysis tool.
Serialization reference: Home · eishay/jvm-serializers Wiki · GitHub

Report worker CPU utilization is too high [618 preparation]
1, Troubleshooting process
1: Check the machine monitoring and preliminarily judge the threads that may consume CPU

2: After exporting jstat information, it is found that the JVM takes up too much (up to 97%) in the old age, and the frequency of full-gc is too high. The full-gc takes up 36 hours in total. The initial positioning is that frequent full-gc leads to excessive CPU load. 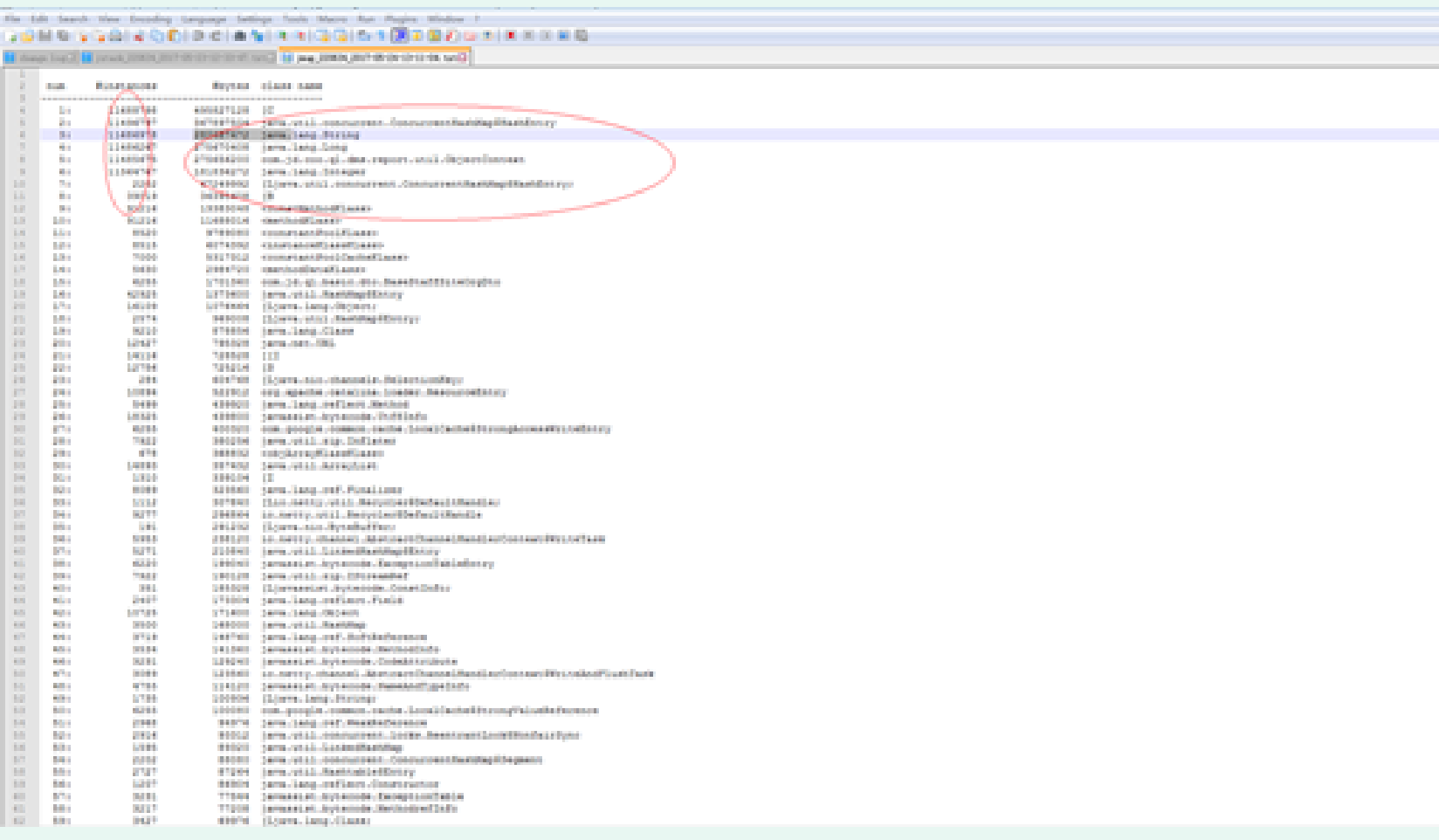 4: Use jmap – dump to export the heap. The KEY in hashMap is the waybill number 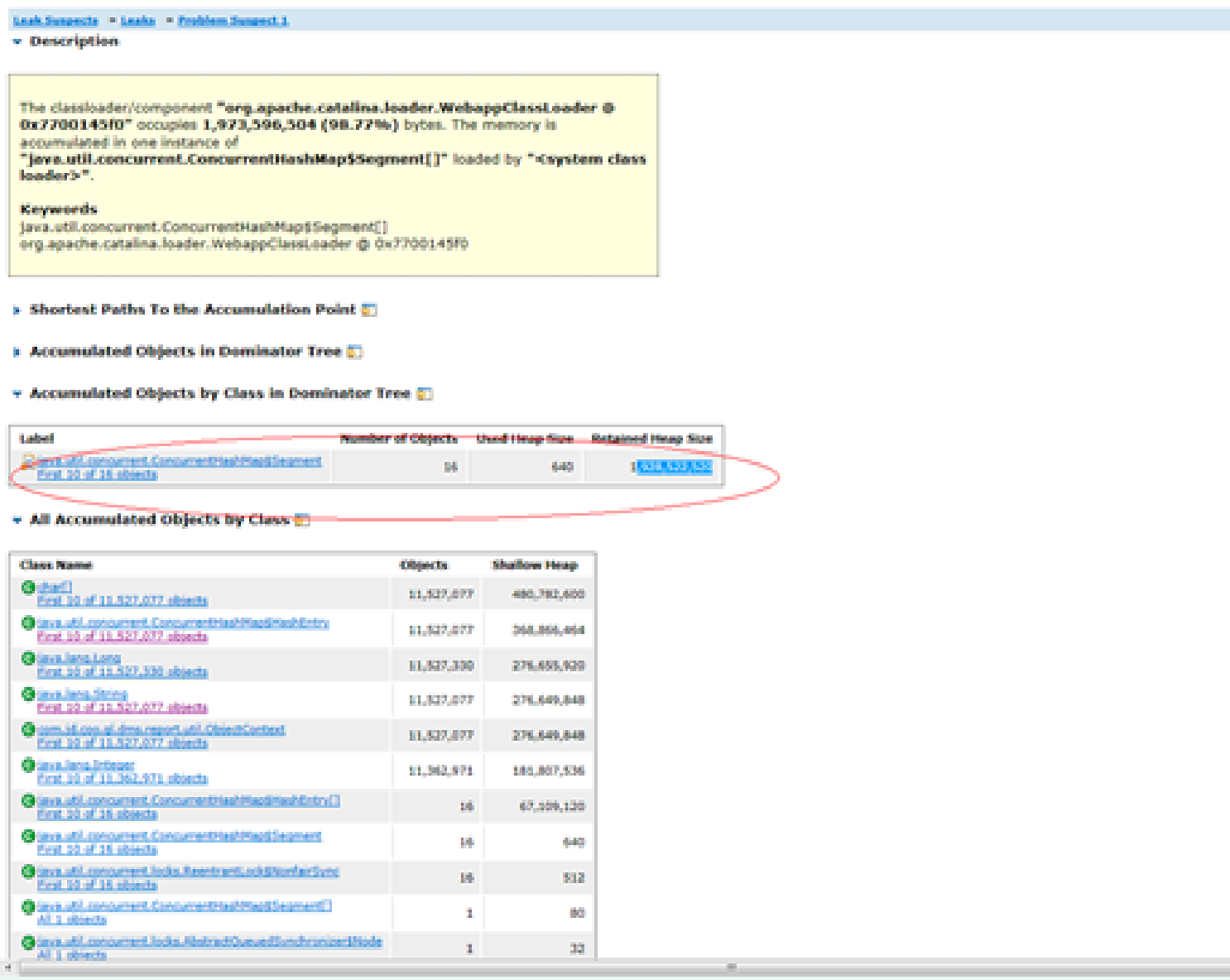 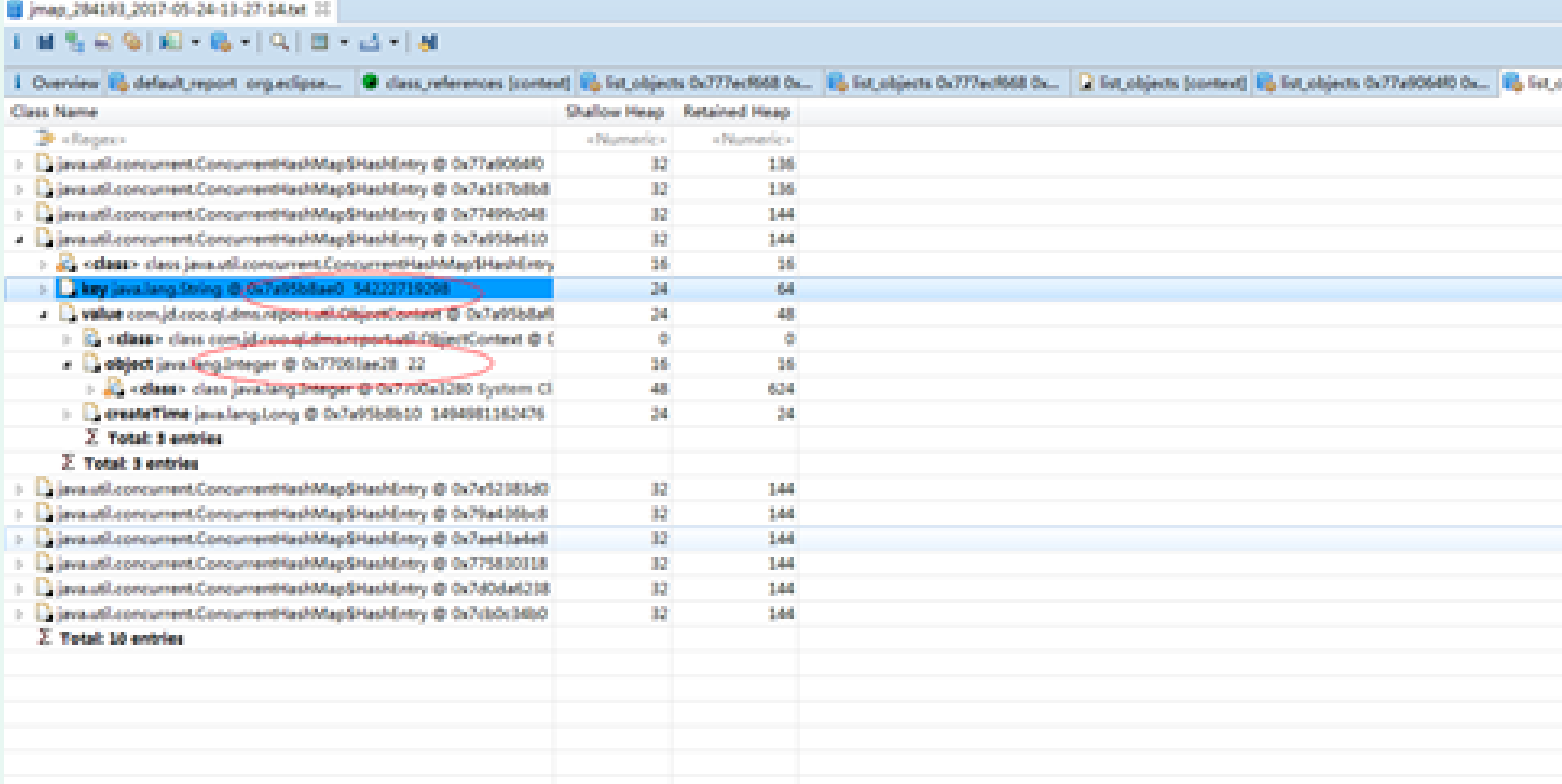 2, Summary
1: When using cache, the capacity should be estimated and the data growth rate should be considered
2: The cache should have an expiration time.

Troubleshooting of RpcException on the caller caused by gc problem

Interpretation of scenario problem cases:
1. When the application is on-line elastic database, the calling area will have large area when querying the history library application service through the interface.
RpcException, as shown in the following figure

3. Observe the application and young gc, as shown in the figure below

5. Print the memory through the jstat command, as shown in the following figure

6. We have previously configured the jvm parameters to print gc logs, as shown below

in summary:
From the gc log, we can see that the CMS remark phase takes a long time. If the frequent full gc and the remark time is relatively long, it will lead to a large area of timeout at the calling end. Next, we need to check the memory through the jstat command and see why the frequent full gc occurs in combination with the configured jvm startup parameters. The jvm startup parameter is configured with - XX:CMSInitiatingPermOccupancyFraction=60. When the persistent tape uses 60% of the space, a full gc will be triggered. Because the persistent tape stores static files, the persistent tape generally has no significant impact on garbage collection. Therefore, consider removing this configuration item.
Solution:
Persistent tapes are used to store static files. Nowadays, Java classes, methods, etc. persistent generation generally has no significant impact on garbage collection. After application startup, the usage of persistent tapes accounts for nearly 60%, so this configuration item can be considered to be removed.
At the same time, add the configuration item - XX:+CMSScavengeBeforeRemark to start young gc once before CMS GC. The purpose is to reduce the reference of old gen to ygc gen and reduce the cost of remark (it can be observed from the above case that 80% of the GC time of CMS is in the remark stage)
The jvm startup parameters are corrected as follows:

Note: compared with the problematic version, the configuration item: - XX:CMSInitiatingPermOccupancyFraction=60 is removed.
-20: Cmsinitiatingoccupancyfraction is modified to 80( Concurrent Mark Sweep (CMS)
Collector (oracle.com) ), add the configuration item - XX:+CMSScavengeBeforeRemark for better observation
gc log, modify the time stamp, and print the format as - XX:+PrintGCDateStamps
The corrected results are shown in the figure below:
1. The calling end invokes the service normally, and rpc exception no longer appears
2. The application of young gc is as follows

3. The application of full gc is as follows

Problem scenario
A timed task job receives an alarm that the cpu is continuously used for more than 90% (the configured time is 180s);
Problem location
a) Observe the jvm monitoring in the alarm and find that it occurs periodically, that is, at 8:00 every day, the cpu lasts from 5% - 99% for about 3 minutes, and then returns to normal. At ordinary times, the cpu utilization is relatively stable (excluding the increase of cpu caused by application release)

b) The periodic occurrence of the task system is likely to be caused by a large number of operations performed regularly. Check the task system page, and there is indeed a scheduled task executed at 8 o'clock
c) Analyze the code and sort out the business logic of the task as follows: a thorough and timed job task; It involves a large number of complex operations. Now it is speculated that it is basically caused by changing the task, so you can reproduce it and confirm it.
The reproduction operation is simple:
c1) find a machine and observe jvm related monitoring; Observation log
c2) modify the number of slices to 1 and specify the slice container ip as the monitored container ip, click execute slice, check the slice, and click execute once after confirmation. It is successfully reproduced by observing step c1).
d) So far, the basic direction is to determine the CPU rise caused by this task. Next, analyze why the CPU rise and how to optimize the problem. 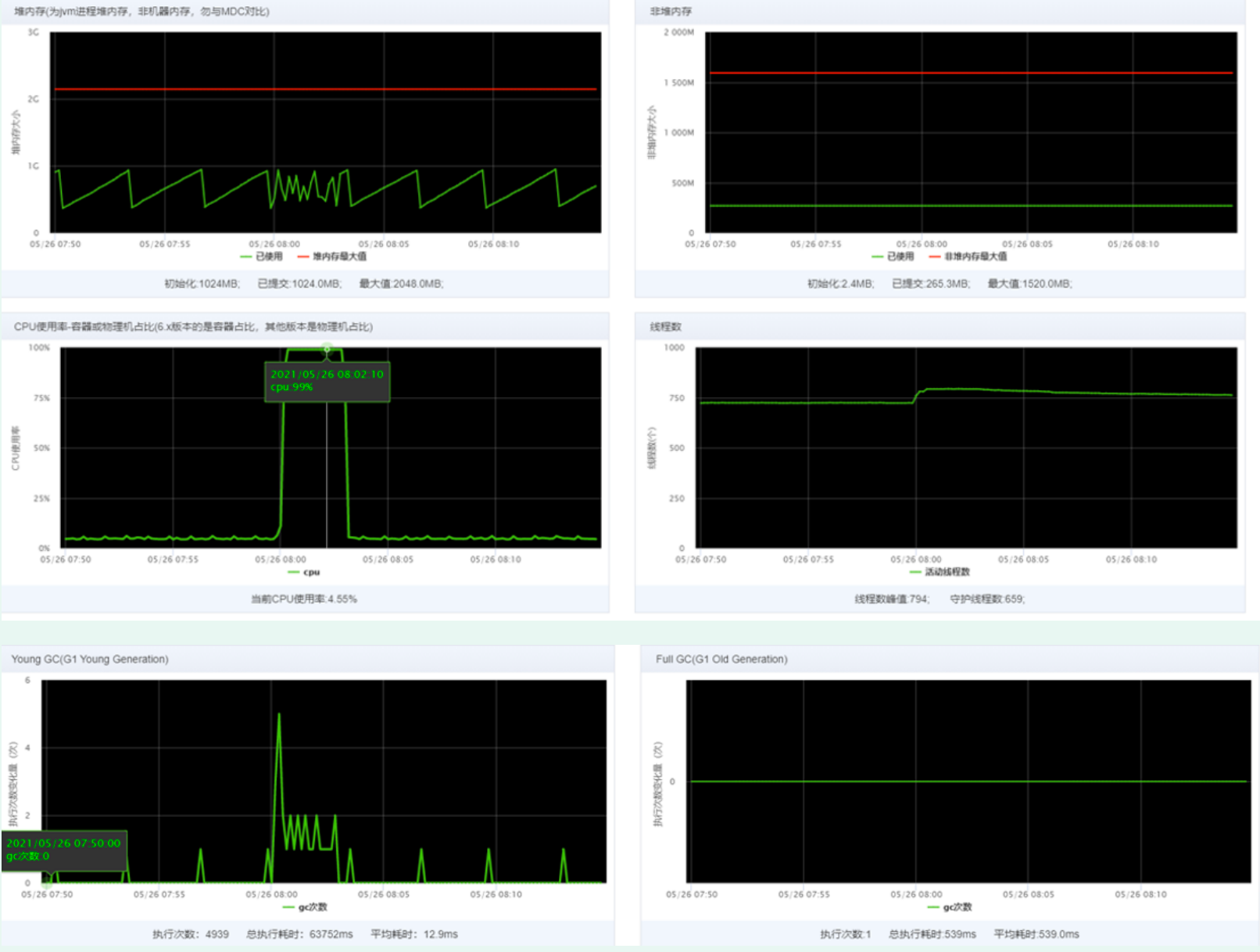 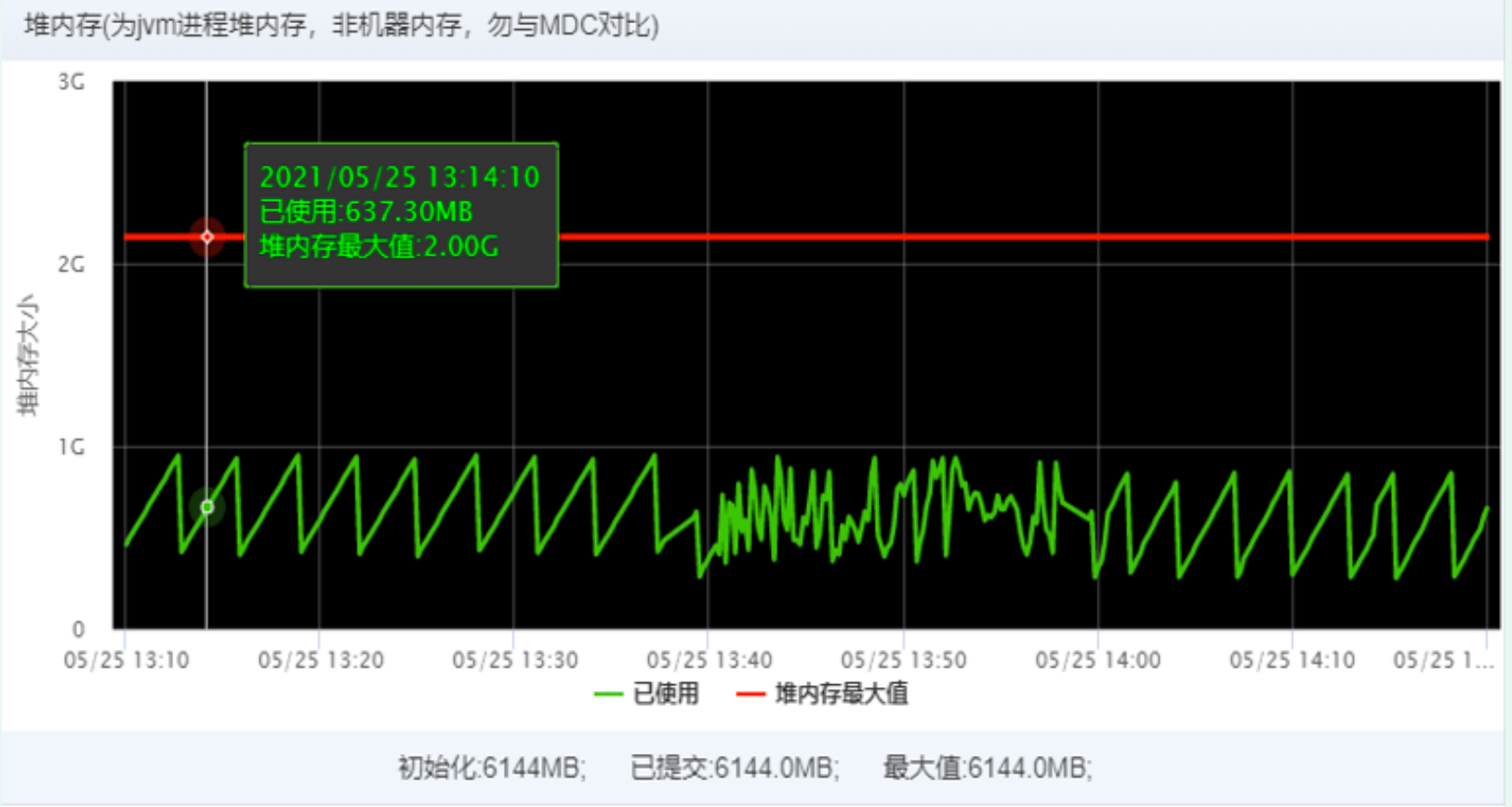 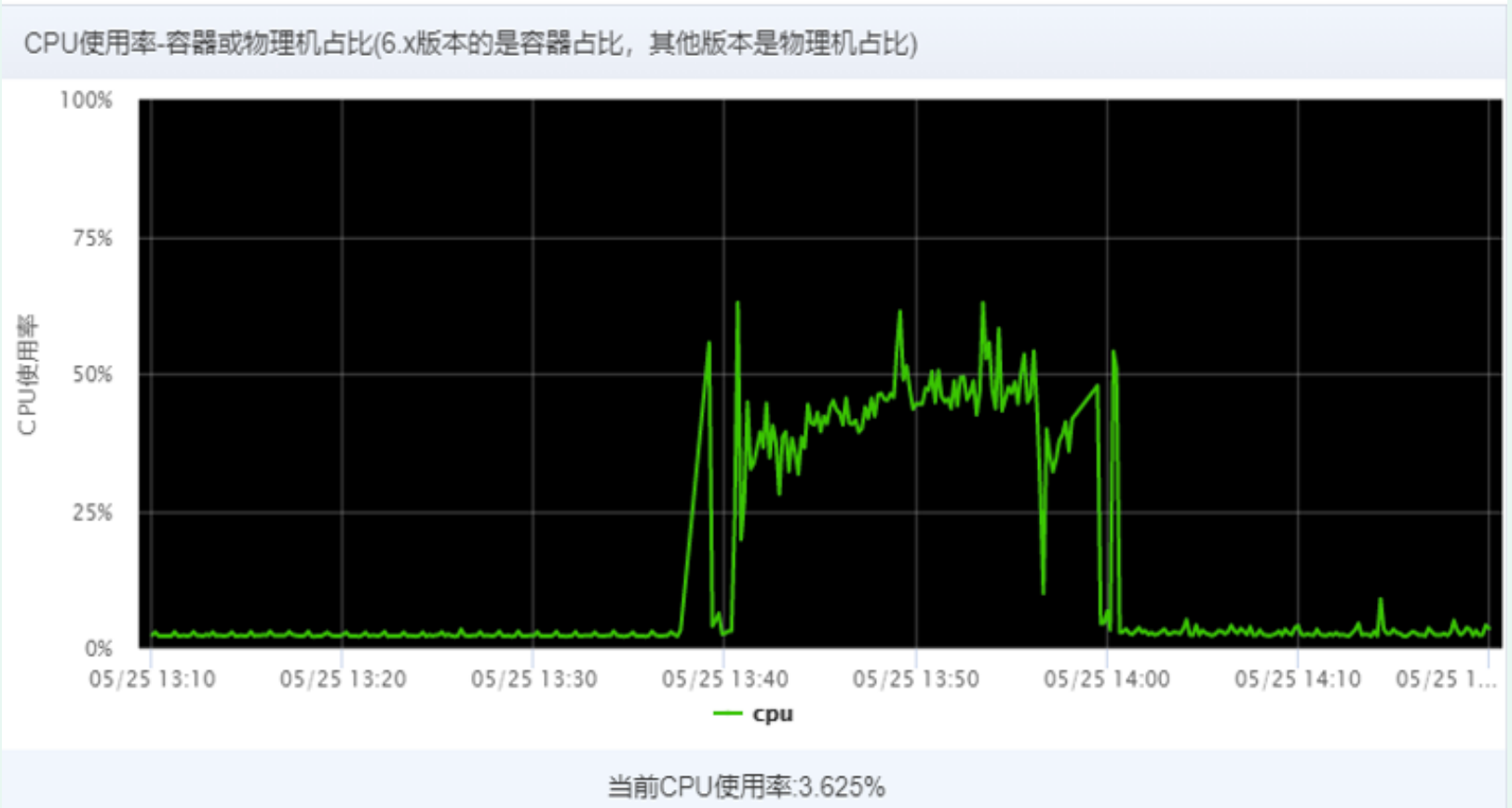 For the 2C4G optimization scheme: a) since this task is thorough, it does not need to be completed immediately, and the execution frequency is once a day, the thread pool can be adjusted to one thread;
b) Apply for container upgrade to 4c*8G
2C4G configured execution job single thread running task

It can be seen that the default ForkJoinPool obtains the number of cores of the current system. If the application is deployed in the docker container, it obtains the number of CPU cores of the host machine
Runtime.getRuntime().availableProcessors() problem:
The container clearly allocates two logical cores. Why does java get the core number of the physical machine? How to solve this problem.
Is it caused by some parameter configuration during container construction? The problem was fed back to the operation and maintenance department, but the other party did not solve the problem.
So can java solve it? After all, if we customize the thread pool setting, the number of threads will also be used
Runtime. getRuntime(). The availableprocessors () method,
This is actually a problem with JDK. It has been trace in JDK-8140793. The reason is that the number of CPU cores is obtained by reading two environment variables, among which

Among them_ SC_NPROCESSORS_CONF is the actual number of CPU s we need in the container.
Get the source code of the number of CPU s
The first method is to use the new version of version 1 above Jdku131.
Another way is to use the self compiled source code above through LD_ Load the modified so file in the way of prload
Mock the number of cores of the CPU
jdk official link statement: Java SE support for Docker CPU and memory limits

Test using method 1: the test environment container is verified, and the verification is passed. The results are as follows:
JDK version jdk1.0 8.0_ 20: Return the number of cpu cores 28 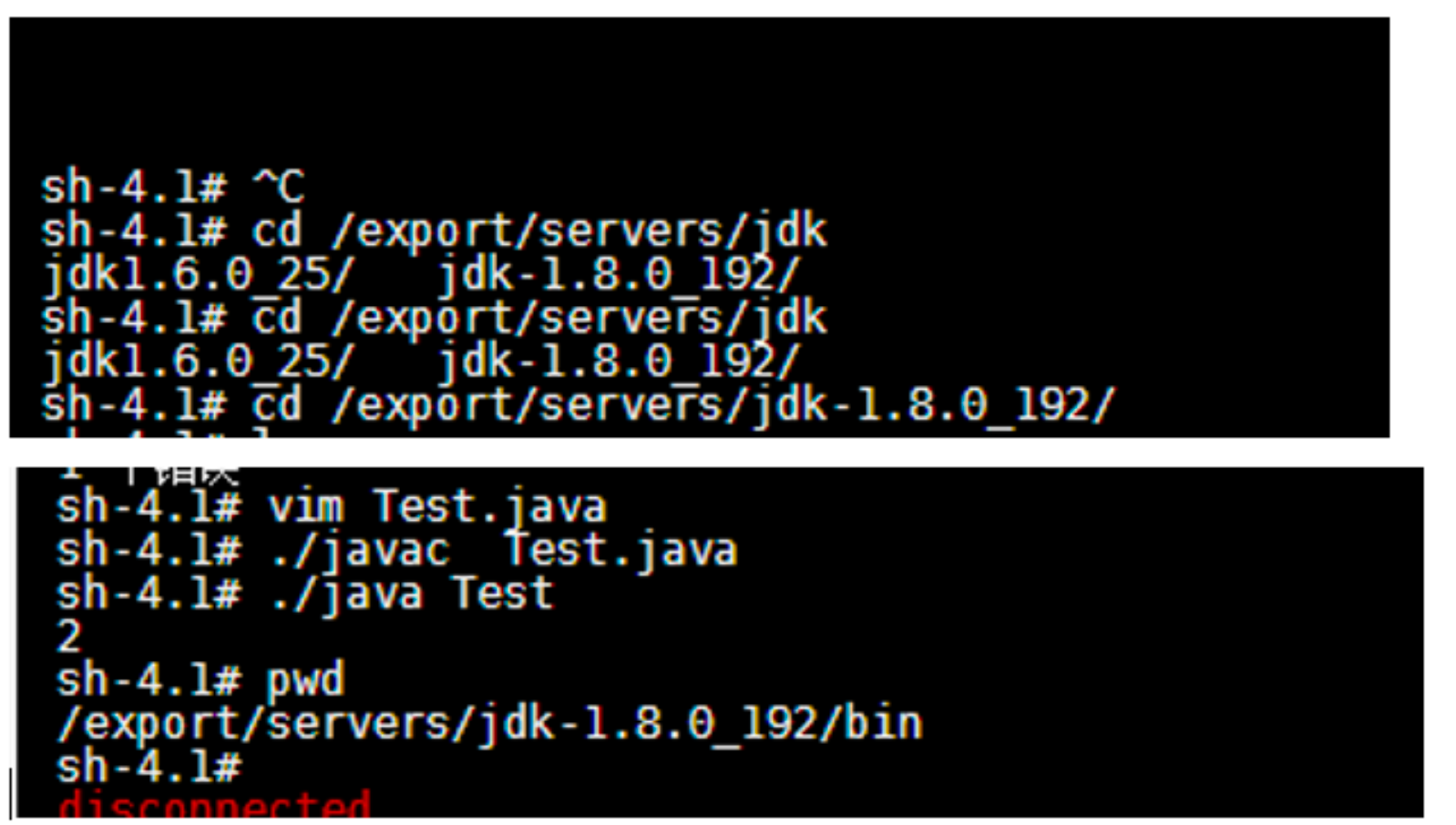 proposal
Try to use lambda expressions to traverse data. It is recommended to use conventional for and for each modes
reason:

Non standard import uses easyexcel component for import processing, and the amount of more than 100000 data leads to high CPU

1. View thread stack related information
2. Check the performance and code call through the pinpoint monitor
3. Is there a large number of blocking slow SQL
4. Whether there is frequent log output in a short time

Use the 300000 data imported from the previous sub table to import. myops checks the information about the top ten thread stacks (as shown in the figure below) and finds lbs_non_standard_account_common single thread consumption occupies about 8% of CPU, and there are a lot of threads started

1. The invoke method of CommonImportExcelListener, a subclass of AnalysisEventListener, has quickly completed the business logic verification at a rate of nearly 10000 per second and sent to MQ, which is consumed internally for business processing logic processing.
300000 data was sent to MQ in nearly 30 seconds, which put pressure on the internal logic of consumption, resulting in high CPU. RateLimiter was used to limit the current sent by MQ.
2. Adjust the maxConcurrent parameter of the consumer theme "lbs_top" (this parameter is set to the number of startup threads in a single group). The maximum number of startup threads of a single application instance = maxConcurrent parameter * number of groups
3. For lbs_ Some business queries in top consumption logic are transformed into memory cache

Recently, the volume of the system has increased by more than 30% every day. At about 18:00 p.m. on February 5, Tian xx monitored and observed the market through mdc, and the cpu occupancy rate of the database reached 89%. Moreover, the business party will launch six new products on February 6 the next day. It is estimated that the flow will be higher than the peak flow on February 5, and the system risk is very high.