Hello, everyone. I'm in the same line

Rich is a Python library, which can provide you with rich text and beautiful and exquisite format in the terminal.

Using Rich API, you can easily add various colors and styles to the terminal output. It can draw beautiful tables, progress bars, markdown, highlight the source code of syntax and backtracking, and so on. There are countless excellent functions. 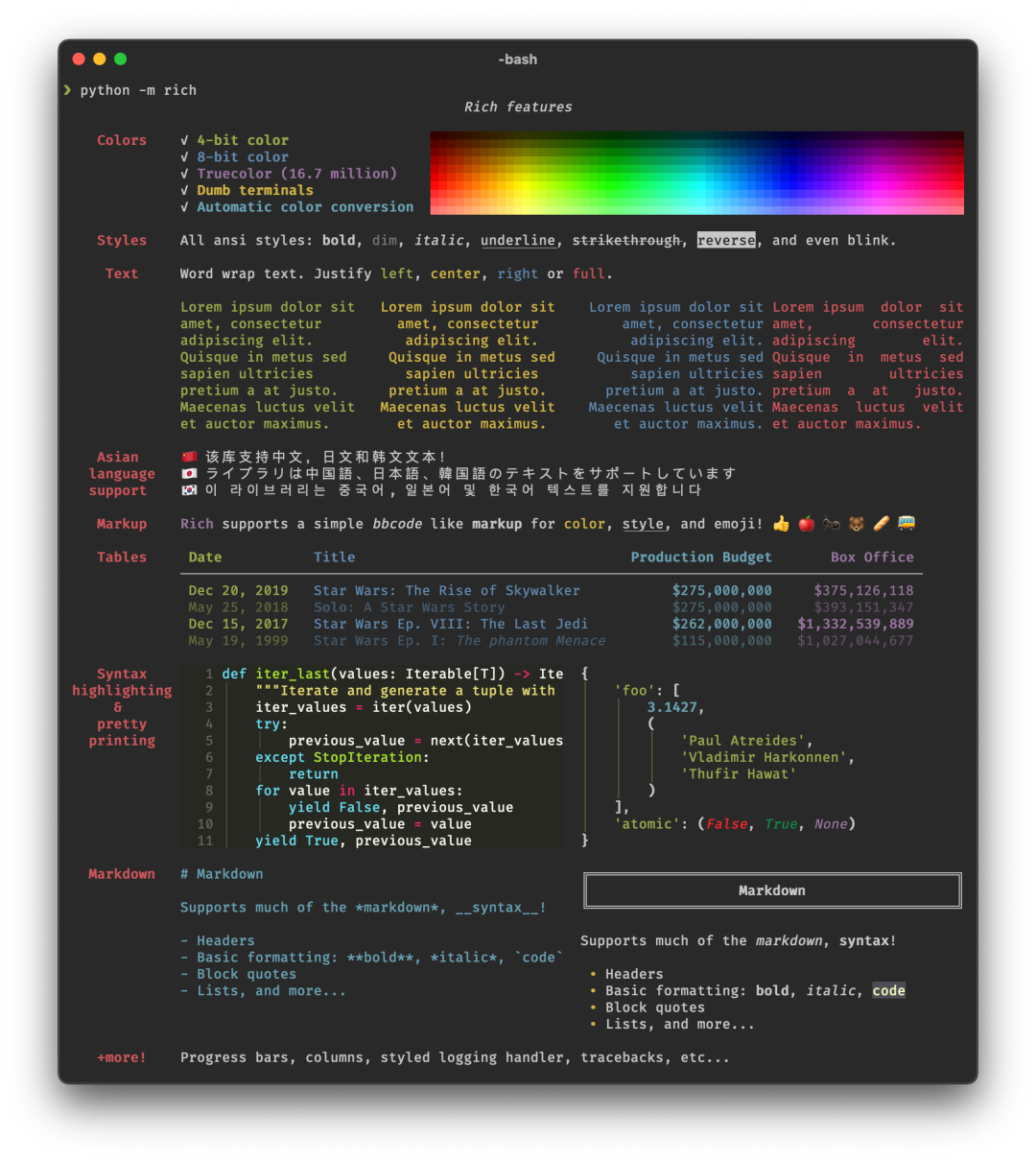 Rich is applicable to Linux, OSX and windows. It can be used with the new Windows terminal. The classic windows terminal is limited to 8 colors.

Rich can also be used with Jupyter NoteBook without additional configuration.

Please choose one of the following ways to enter the command to install dependencies:

To easily add Rich's output function to your Python script, you just need to import the rich print method, which is similar to the parameters of other Python's built-in functions. You can try: 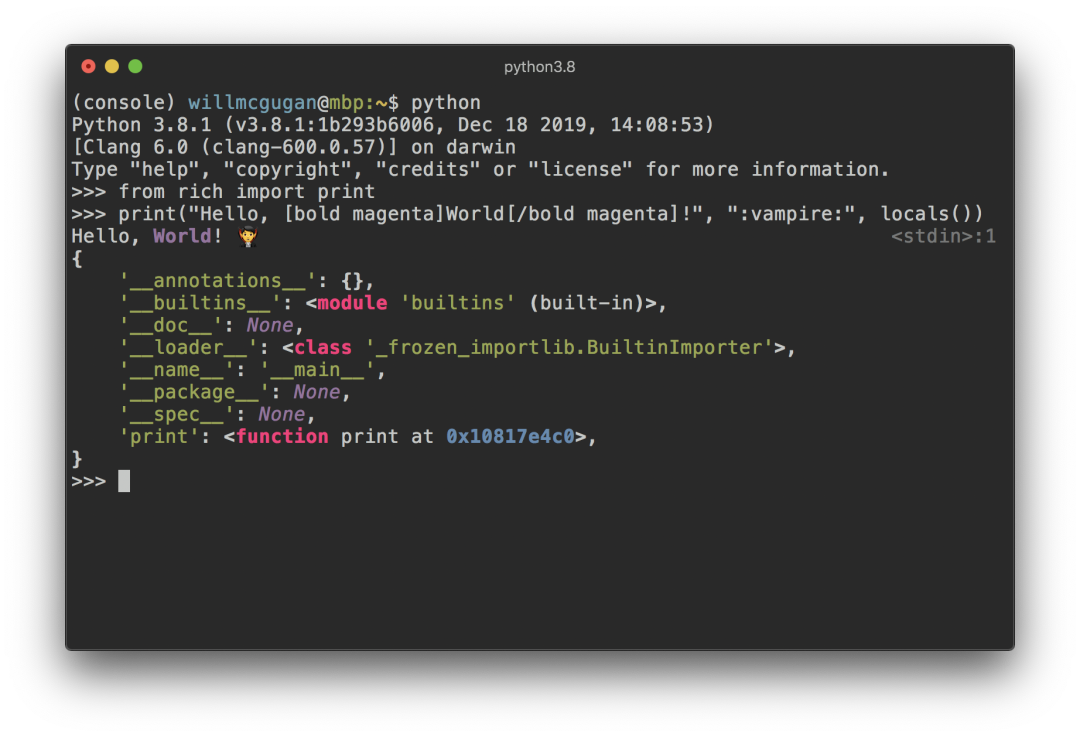 It can be seen that the output content of rich based print method is colored and focused, which has obvious advantages over Python's own print.

To make more custom settings for Rich terminal content, you need to import and construct a console object:

The Console object contains a print method, and its interface is similar to the print function built in python. You can try:

You may have expected that "Hello World!" will be displayed on the terminal, Note that unlike the built-in "print" function, Rich automatically wraps text to fit the terminal width.

There are several ways to add custom colors and styles to your output. You can style the entire output by adding the style keyword parameter. Examples are as follows: 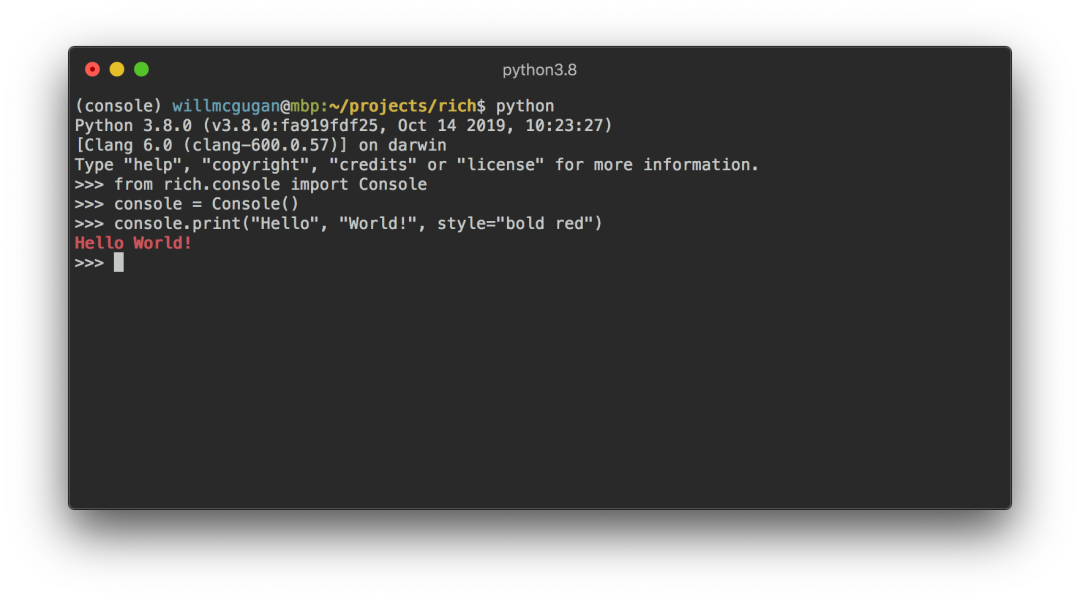 This example sets the style of only one line of text at a time. If you want more delicate and complex styles, Rich can render a special tag with a syntax similar to bbcode. Examples are as follows: 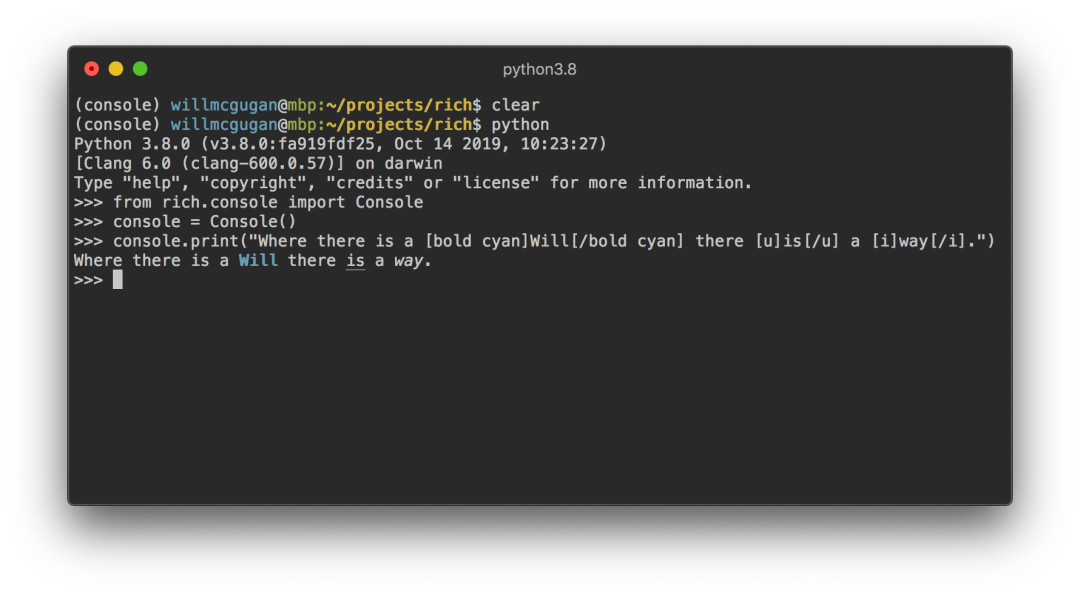 The Console object has a log() method, which has an interface similar to print(). In addition, it can display the current time and the called files and lines.

By default, Rich syntax highlights Python structures and repr strings. If you record a collection (such as a dictionary or list), Rich will print it beautifully to match the available space. Here are some examples of these features:

The output of the above example is as follows: 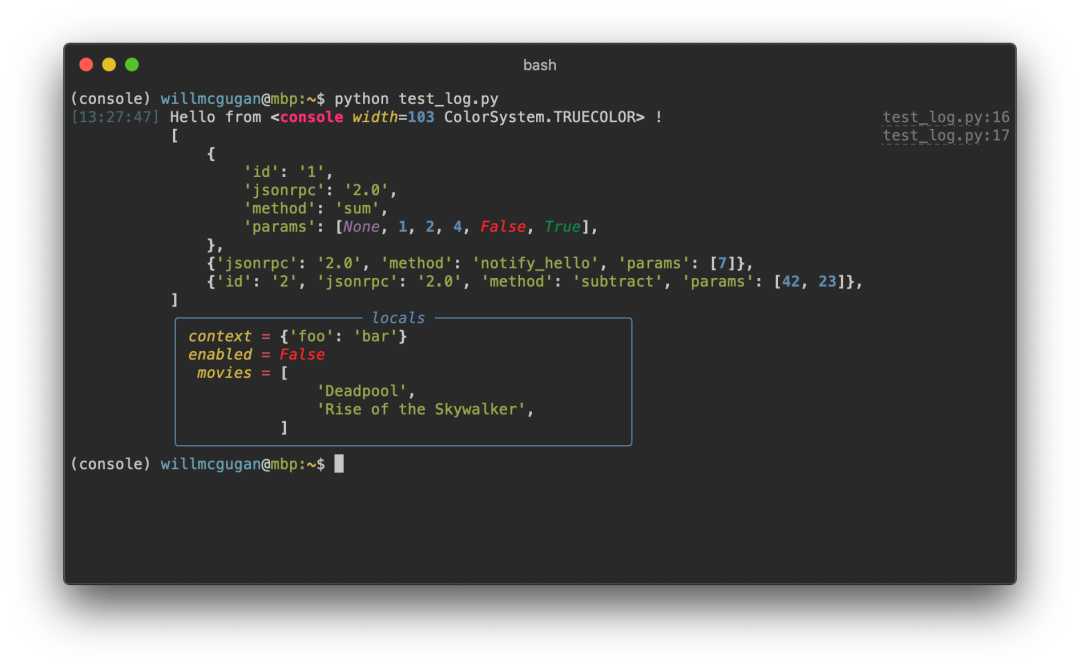 Note the log_ The locals parameter outputs a table that contains the local variables that call the log method.

The log method can be used not only to record the logs of long-running applications (such as servers) to the terminal, but also to assist debugging.

You can also use the built-in processing classes to format and color the output of the Python logging module. The following is an example of the output:

Place the name between two colons to insert emoticons in the console output. Examples are as follows:

Please use this function with caution.

Rich contains a variety of formatting options such as border, style and cell alignment. Here is a simple example:

The output of this example is as follows: 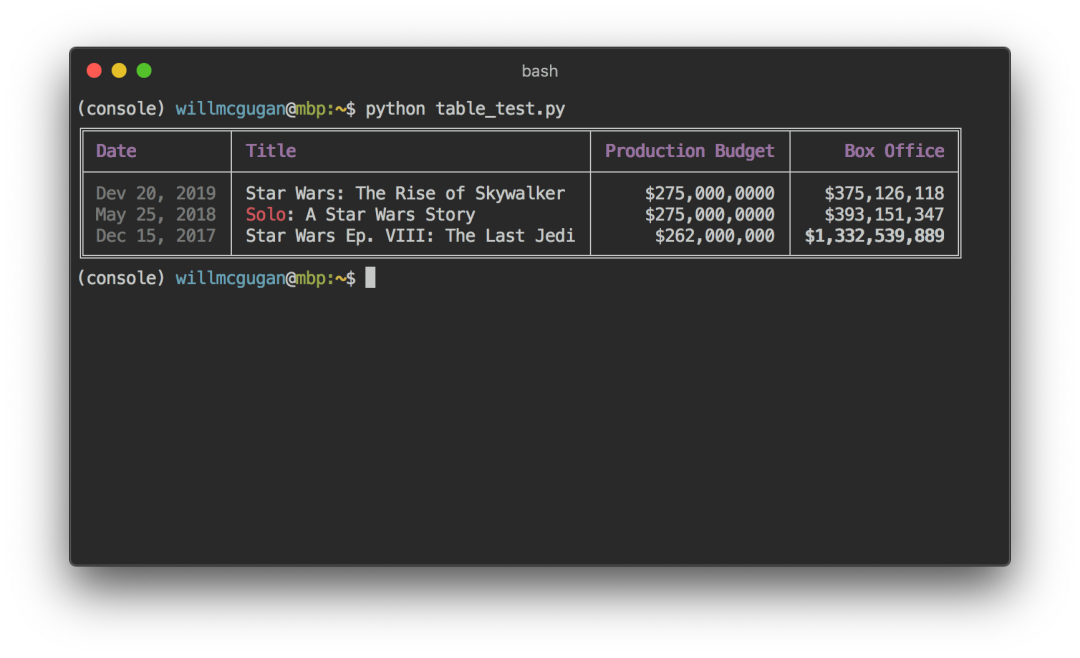 Note that console tags are rendered in the same way as print() and log(). In fact, anything rendered by Rich can be added to the title / row (or even other tables).

The Table class is very smart. It can adjust the size of the column to fit the available width of the terminal, and can wrap the text as needed. The following is the same example. The output is the same as that on the terminal smaller than the above Table: 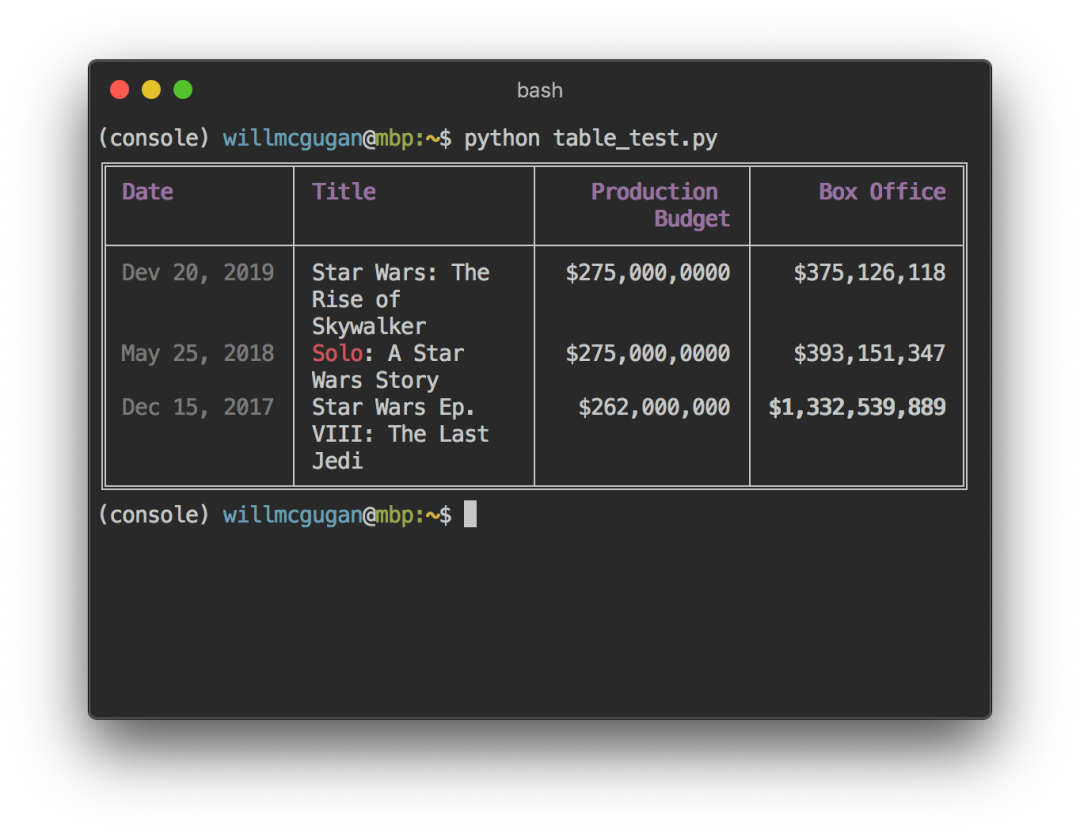 Basic usage: use the track function to call the program and iterate the results. Here is an example:

Adding multiple progress bars is not difficult. The following is an example of the effect:

These columns can be configured to display any details you need.

Built in columns include percent complete, file size, file speed, and time remaining. The following is an example showing a download in progress:

It can download multiple URL s while displaying progress. To try it on your own, see examples / downloader. Exe in the sample file Py, download the full example of the rich sample in the Python utility official account.

Rich can present content through neatly arranged columns with equal or optimal width. The following is a very basic clone of the (macOS / Linux) ls command. The list of directories is displayed in columns:

The following screenshot is the output of a sample column that shows the data extracted from the API: 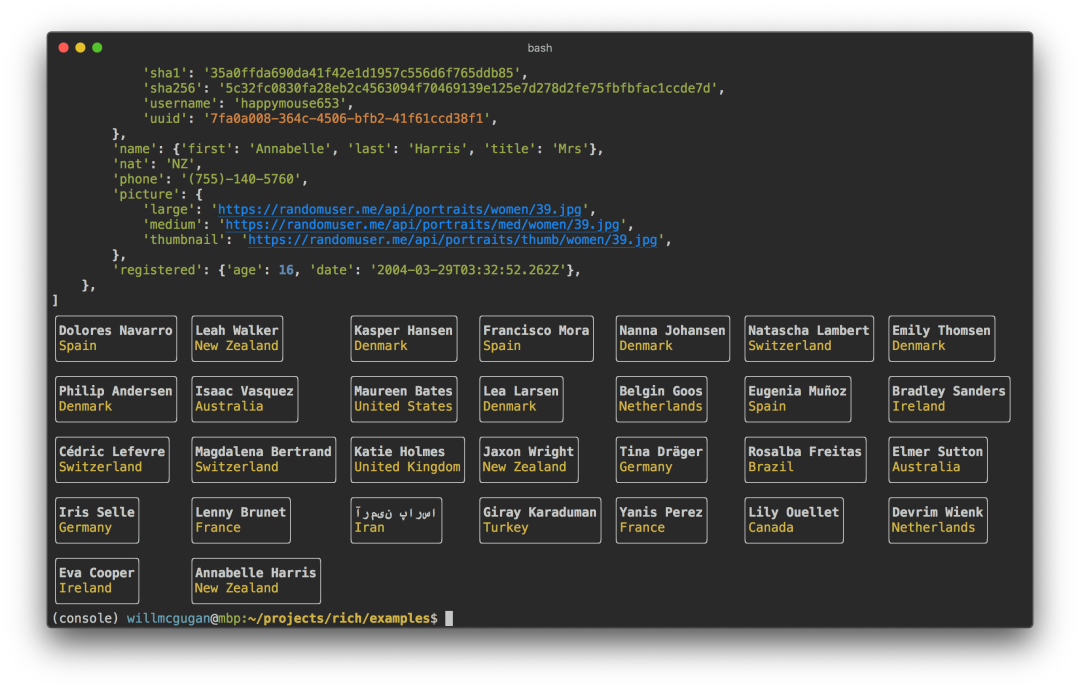 Rich can present markdown and display its format to the terminal quite well.

To render Markdown, import the Markdown class and print it to the console. Examples are as follows:

The output of this example is as follows: 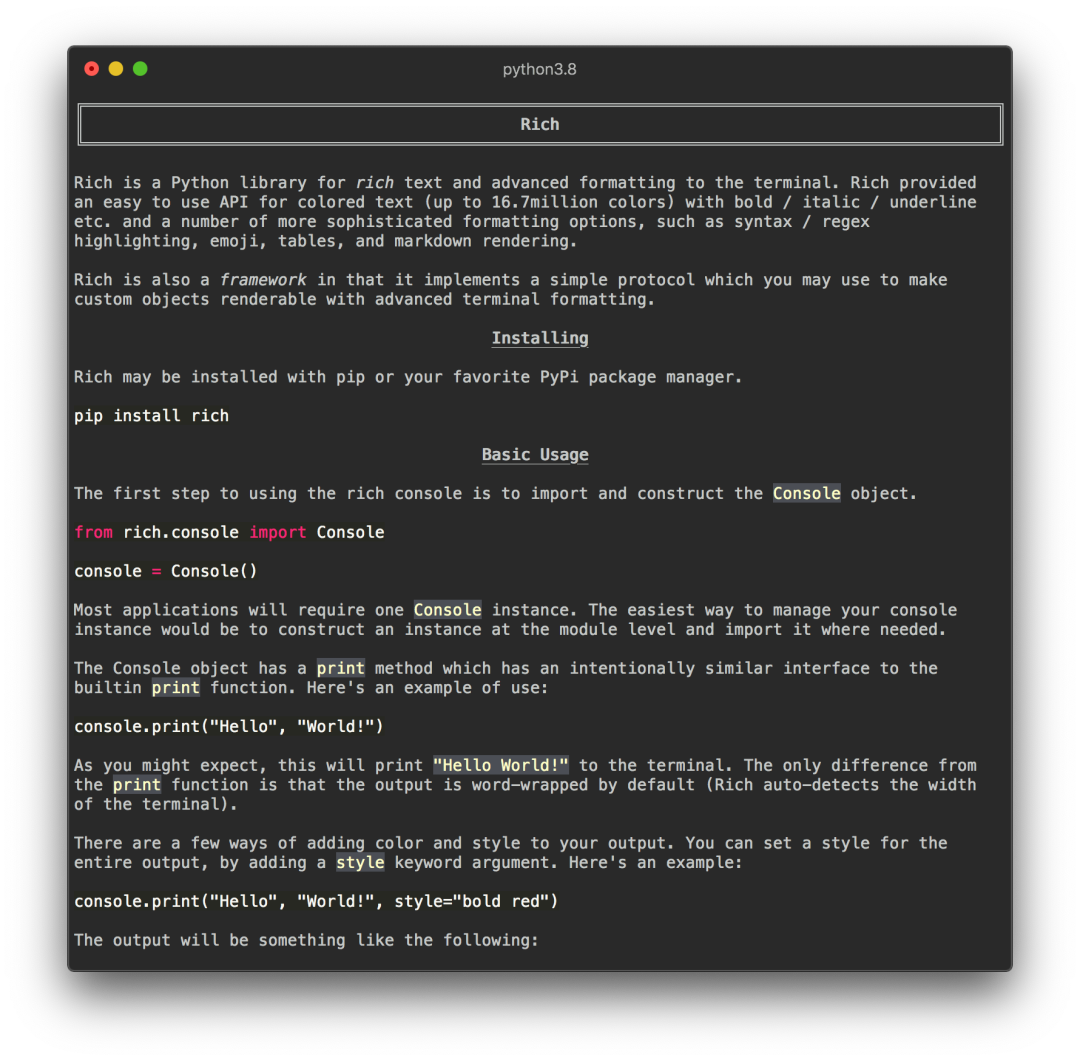 Rich uses the pysegments library for Syntax highlighting. The usage is similar to rendering markdown. Construct a Syntax object and print it to the console. Here is an example: 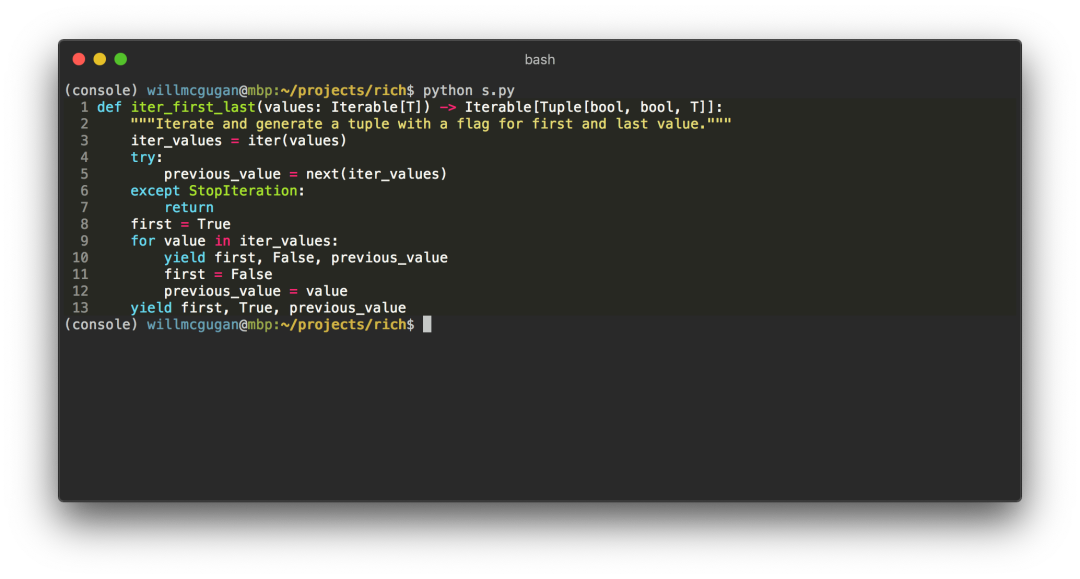 Rich can render beautiful error backtracking logs, which are easier to read than standard Python backtracking, and can display more code.

You can set Rich as the default backtracking handler so that all exceptions will be rendered by Rich for you.

The following is the appearance on OSX (similar to Linux): 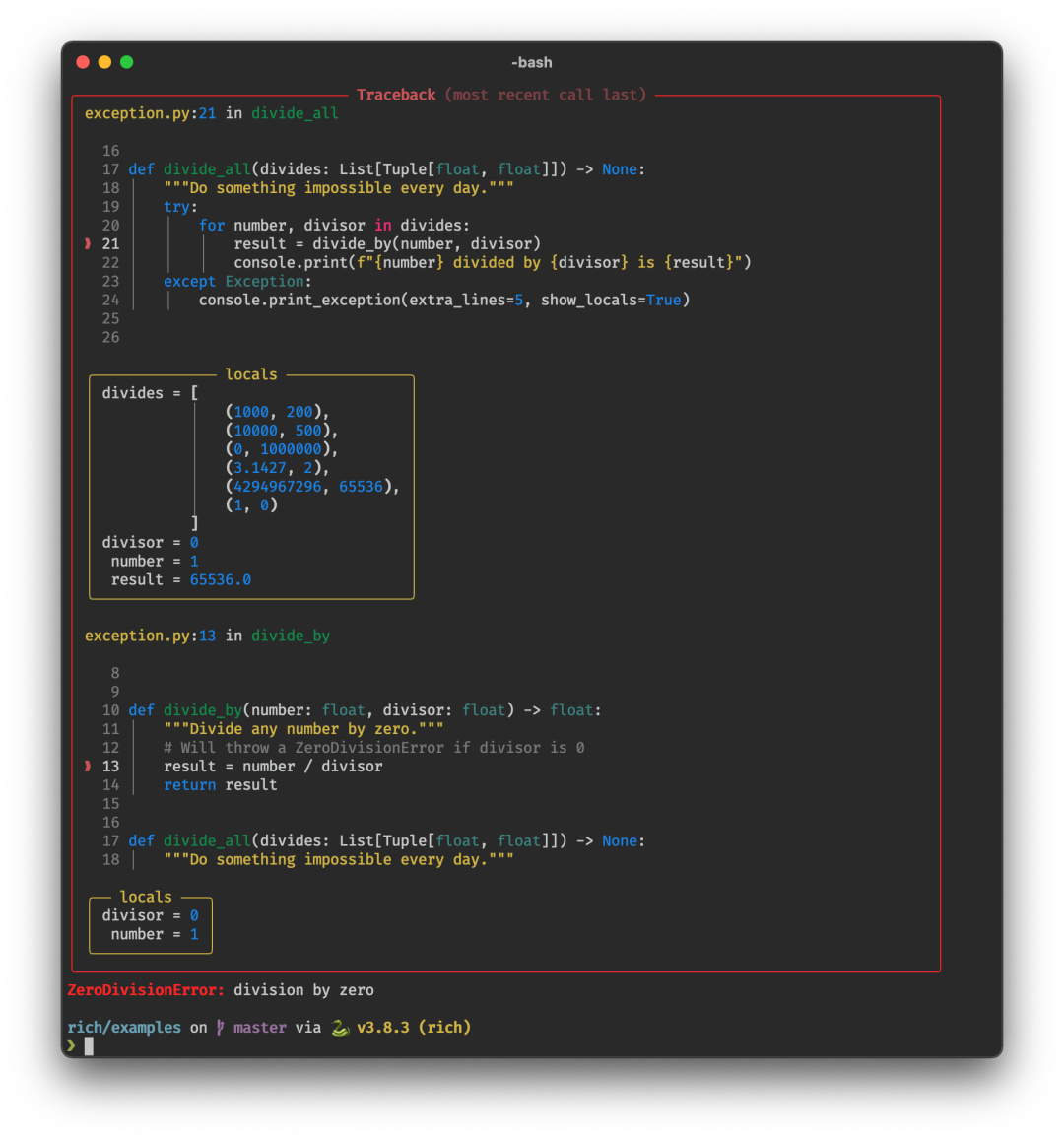 This is the end of our article. If you like today's Python practical tutorial, please continue to pay attention to us. Remember to leave three messages in the welcome area.