Principle analysis of HashMap and currentHashMap

Reference from HashMap? ConcurrentHashMap? I believe no one can stop you after reading this article!

Key and value such as Map are very classic structures in software development. They are often used to store data in memory.

As we all know, the bottom layer of HashMap is based on array + linked list, but in jdk1 The specific implementation in 7 and 1.8 is slightly different. 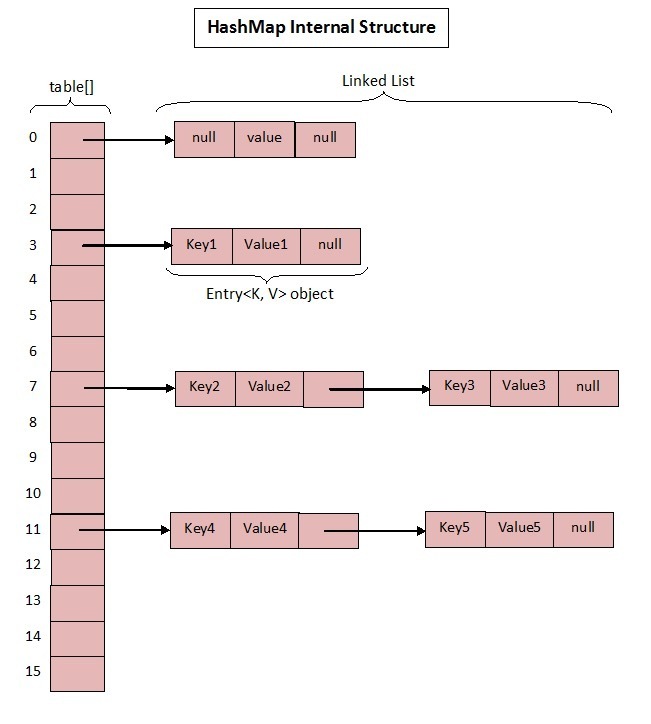 These are the core member variables in HashMap; See what they mean?

Focus on the following load factors:

Because the capacity of a given HashMap is fixed, such as default initialization:

The given default capacity is 16 and the load factor is 0.75. During the use of Map, data is constantly stored in it. When the number reaches 16 * 0.75 = 12, the capacity of the current 16 needs to be expanded. This process involves rehash, copying data and other operations, so it consumes a lot of performance.

Therefore, it is generally recommended to estimate the size of HashMap in advance to minimize the performance loss caused by capacity expansion.

According to the code, you can see that what actually stores data is

How is this array defined? 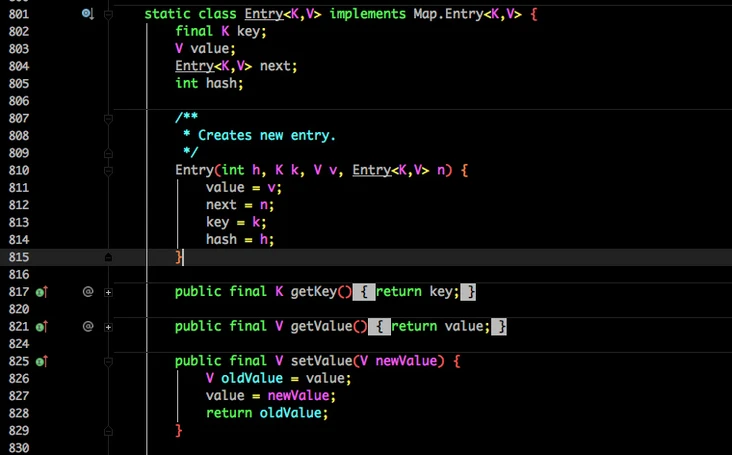 Entry is an internal class in HashMap. It is easy to see from its member variables:

After knowing the basic structure, let's take a look at the important write and get functions:

When calling addEntry to write Entry, you need to judge whether capacity expansion is required.

If necessary, double expand and re hash and locate the current key.

In createEntry, the bucket at the current location will be transferred into the new bucket. If the current bucket has a value, a linked list will be formed at the location.

Let's look at the get function:

I don't know the implementation of 1.7. Do you see the points that need to be optimized?

In fact, one obvious thing is:

When the Hash conflict is serious, the linked list formed on the bucket will become longer and longer, so the efficiency of query will be lower and lower, and the time complexity is O(N).

Therefore, 1.8 focuses on optimizing the query efficiency. The structure diagram after 1.8 is as follows: 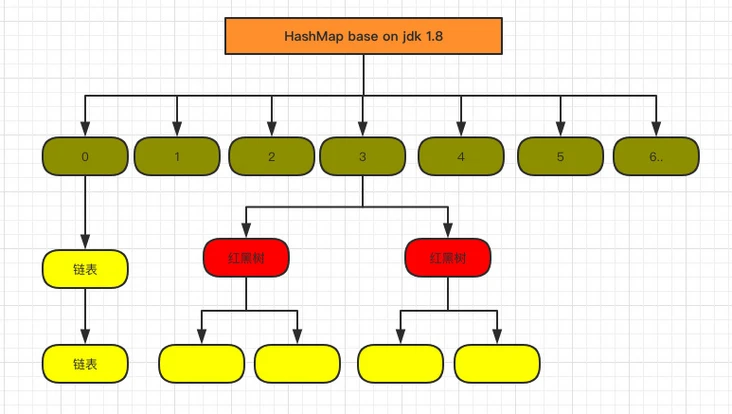 The core member variables are as follows:

It is almost the same as 1.7, but there are still several important differences:

Let's look at the core method: 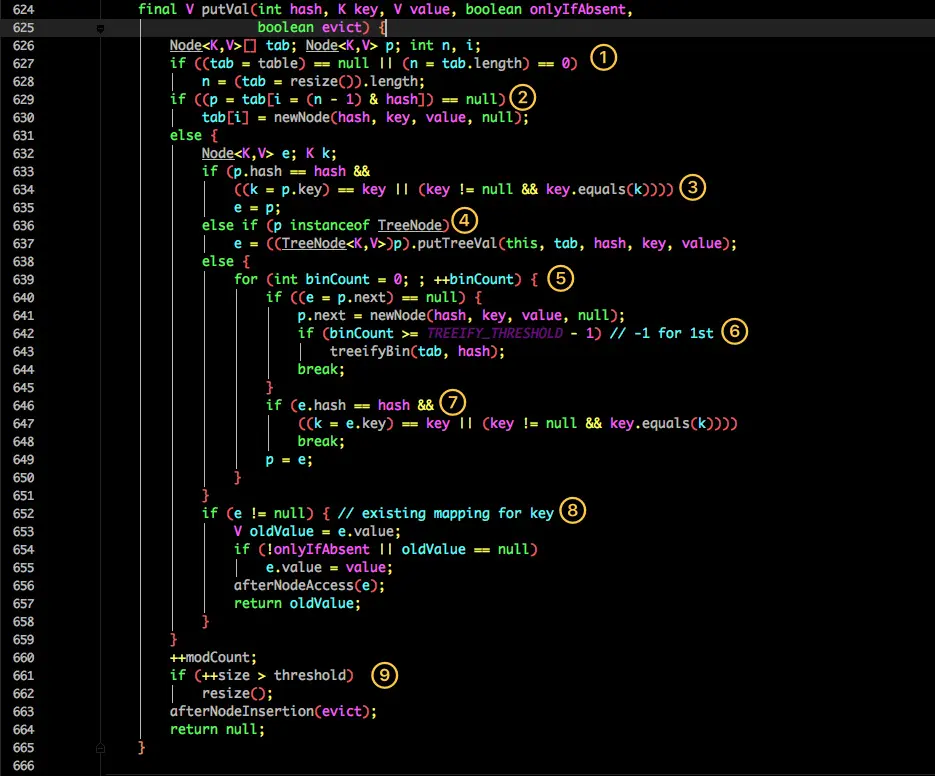 It seems to be more complex than 1.7. We disassemble it step by step:

The get method looks much simpler.

From these two core methods (get/put), we can see that the large linked list is optimized in 1.8. After it is modified to red black tree, the query efficiency is directly improved to O(logn).

However, the original problems of HashMap also exist, such as:
(1) When used in concurrent scenarios, it is prone to dead cycles and data loss:
After reading the above, I still remember that the resize() method will be called when HashMap is expanded, that is, the concurrent operation here is easy to form a ring linked list on a bucket; In this way, when a nonexistent key is obtained, the calculated index is exactly the bucket where the ring linked list is located, and an endless loop will appear. At the same time, multiple threads expand at the same time, and the final result will lead to data loss.
(2) Modifying the value of the same key by multiple threads at the same time will lead to data overwrite:
The essence is to modify the invisibility and non atomicity of data, which makes the data modification unsafe in the concurrent scene of HashMap.

Concurrent HashMap is also divided into versions 1.7 and 1.8, which are different in implementation.

Let's take a look at the implementation of 1.7. Here is its structure diagram: 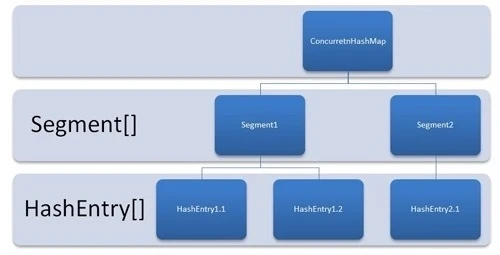 As shown in the figure, it is composed of Segment array and HashEntry. Like HashMap, it is still array + linked list.
Its core member variables are as follows:

Segment is an internal class of ConcurrentHashMap. Its main components are as follows:

See the composition of HashEntry:

It is very similar to HashMap. The only difference is that the core data such as value and linked list are modified by volatile to ensure the visibility during acquisition.

In principle, ConcurrentHashMap adopts Segment lock technology, in which Segment inherits ReentrantLock. Not like HashTable, both put and get operations need to be synchronized. Theoretically, ConcurrentHashMap supports thread concurrency of currencylevel (the number of Segment arrays is 16). Every time a thread accesses a Segment using a lock, it will not affect other segments.

The core put and get methods are as follows:

First, locate the Segment through the key, and then make specific put in the corresponding Segment:

Although the value in HashEntry is modified with volatile keyword, it does not guarantee the atomicity of concurrency, so it still needs to be locked during put operation. 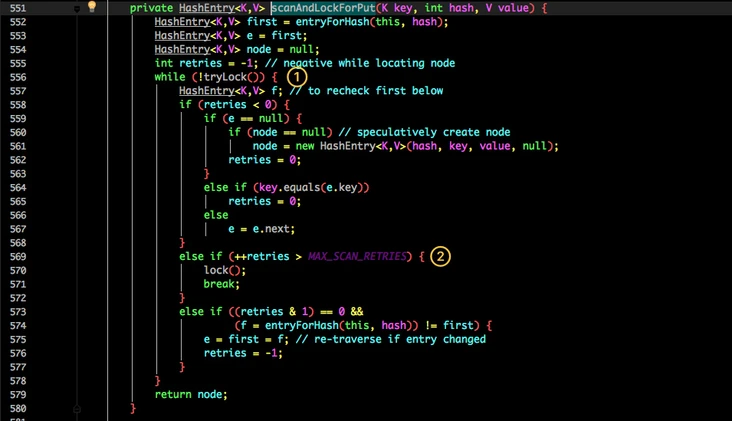 Continue back to the put process: 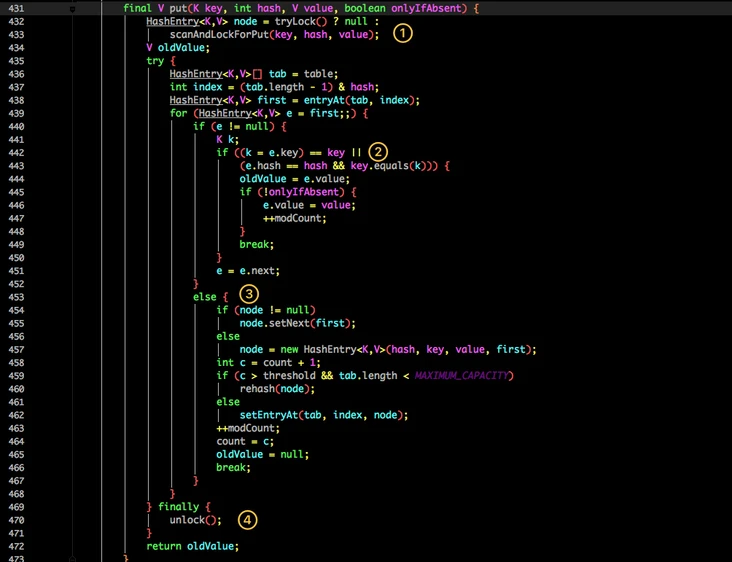 The get logic is relatively simple:

Because the value attribute in HashEntry is decorated with volatile keyword to ensure memory visibility, it is the latest value every time it is obtained.

The get method of ConcurrentHashMap is very efficient, because the whole process does not need to be locked.

Therefore, some data structure adjustments have been made in 1.8.

First, let's look at the composition of the bottom layer: 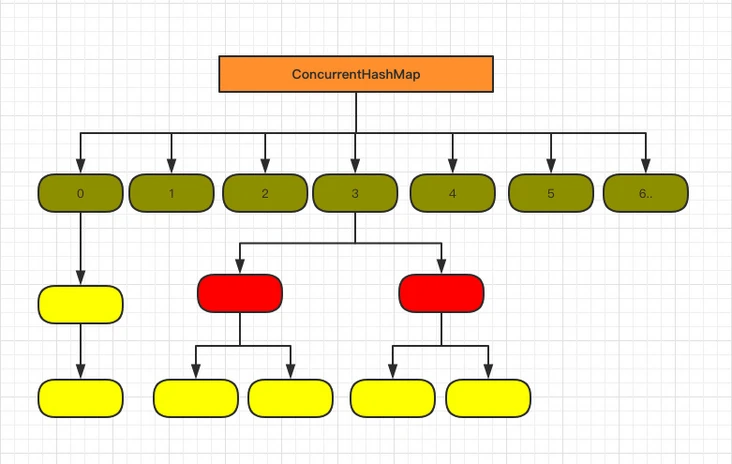 Does it look similar to the 1.8 HashMap structure?

The original Segment lock is abandoned and CAS + synchronized is used to ensure concurrency security.

The HashEntry storing data in 1.7 is also changed to Node, but the function is the same.

val next is decorated with volatile to ensure visibility.

Similarly, the get method does not need to be locked:

In summary, jdk1 In 8, ConcurrentHashMap gives up the segment lock in 1.7 and locks the bucket chain header to ensure the security of data modification (CAS is used when creating a new linked list when the bucket is empty, because CAS is more lightweight when modifying a single variable). And the red black tree is also used to optimize the efficiency of searching in the same bucket.