These two operations are generally used for saving objects and network transmission of byte sequences of objects.
For example, in many applications, some objects need to be serialized to leave the memory space and live in the physical hard disk, so as to reduce the memory pressure or facilitate long-term storage. Or serialize and save some objects in a highly concurrent environment and call them out when necessary, which can reduce the pressure on the server

Location: Java.io.ObjectOutputStream
Serialization: ObjectOutputStream class -- > writeobject()
Note: this method serializes the obj object specified by the parameter, writes the byte sequence to a target output stream, and gives the file a. ser extension according to Java standard convention

Deserialization: ObjectInputStream class -- > readobject()
Note: this method reads byte sequences from a source input stream, deserializes them into an object, and returns them.

Paste a code to realize the following principle:

From the running results, we can see that after serializing and deserializing the object of String type, we still get the original object:

The steps of object deserialization are as follows:

This is dry. Look at this

If a Java application deserializes user input, that is, untrusted data, an attacker can construct malicious input to cause the deserialization to generate unexpected objects, which may lead to arbitrary code execution in the generation process.

Well, now we know the general direction, but why start with commons collections?

The reason is that a large number of serialization / deserialization and a large number of extended data structures and toolsets will be used in the development of large Java projects. CommonsCollections provides a class package to extend and add the standard Java collection framework, that is, these extensions also belong to the basic concept of collection, but have different functions.

As an important component of Apache open source project, Commons Collections is widely used in the development of various Java applications. It is precisely because of the implementation of these classes and method calls in a large number of web applications that lead to the universality and severity of the vulnerability for deserialization.

There is a special interface in common collections. A class that implements this interface can call any function by calling Java's reflection mechanism, which is called InvokerTransformer.

Reflection mechanism of Java:
In the running state:
For any class, you can judge the class to which an object belongs;
For any class, you can know all the properties and methods of this class;
For any object, you can call any of its methods and properties;
This kind of dynamically acquired information and the function of dynamically calling object methods are called the reflection mechanism of java language.

According to the above explanation and definition, we can get a general idea

To realize the above ideas, we have to solve three problems:

How to execute commands

First of all, we can know that in order to call external commands in java, we can use this function Runtime.getRuntime().exec(). However, we need to find an object first to store and execute our commands in specific cases.

The Map class is a data structure that stores key value pairs. Apache Commons Collections implements transformaedmap. When an element is added / deleted / modified (i.e. key or value: the data storage form in the collection is an index corresponding to a value, just like the relationship between ID card and person), this class will call the transform method to automatically perform specific modification transformation. The specific transformation logic is defined by the Transformer class. In other words, when the data in the TransformedMap class changes, some special transformations can be automatically performed on it, such as changing it back when the data is modified; Or when the data changes, do some operations we set in advance.

As for the operation or transformation, we set it in advance. This is called transform. We'll learn about transform later.

This method is used to convert the Map data structure into transformedMap. This method receives three parameters:

Transformer interface
Function: all classes that interface with Transformer have the function of converting one object into another
The source code is as follows

For subsequent use, we will use several classes that implement Transformer

ConstantTransformer
Converts an object to a constant and returns.

InvokerTransformer
Returns an object through reflection

We can obtain the Runtime class with ConstantTransformer(), then call getRuntime function through reflection, and then call exec() function of getRuntime to execute the command ''. The calling relationship is: Runtime -- > getRuntime -- > exec()

Here is a code to implement the logic

How to execute commands when reading objects

According to the idea of our previous construction, we need to rely on an item in the Map to call setValue() to trigger command execution. How can execution be triggered directly when the readObject() method is called?

Further thinking
We know that if the method of a class is overridden, the modified method will be called first when calling this function. Therefore, if a serializable class overrides the readObject() method and modifies the key value of the Map variable in readObject(), and the Map variable is controllable, we can achieve the attack target.

(there are many ways to use it. Let's choose some typical ones)

The construction idea of using AnnotationInvocationHandler:

Next, let's look at the implementation idea according to the code:

Utilization chain of LazyMap class
As mentioned earlier, the AnnotationInvocationHandler may be triggered unsuccessfully due to the jdk version, so the second method is triggered in cooperation with LazyMap. In addition, LazyMap triggers more stably, and some serialization tools such as ysoserial also use the LazyMap utilization chain.

Let's take a look at the LazyMap code and find that the transform method is called in the get method of the LazyMap class! 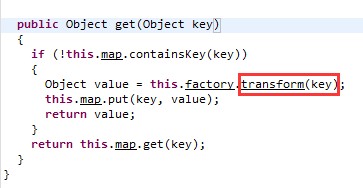 In this way, we only need to find the class that can trigger the get method in LazyMap when readObject is found. 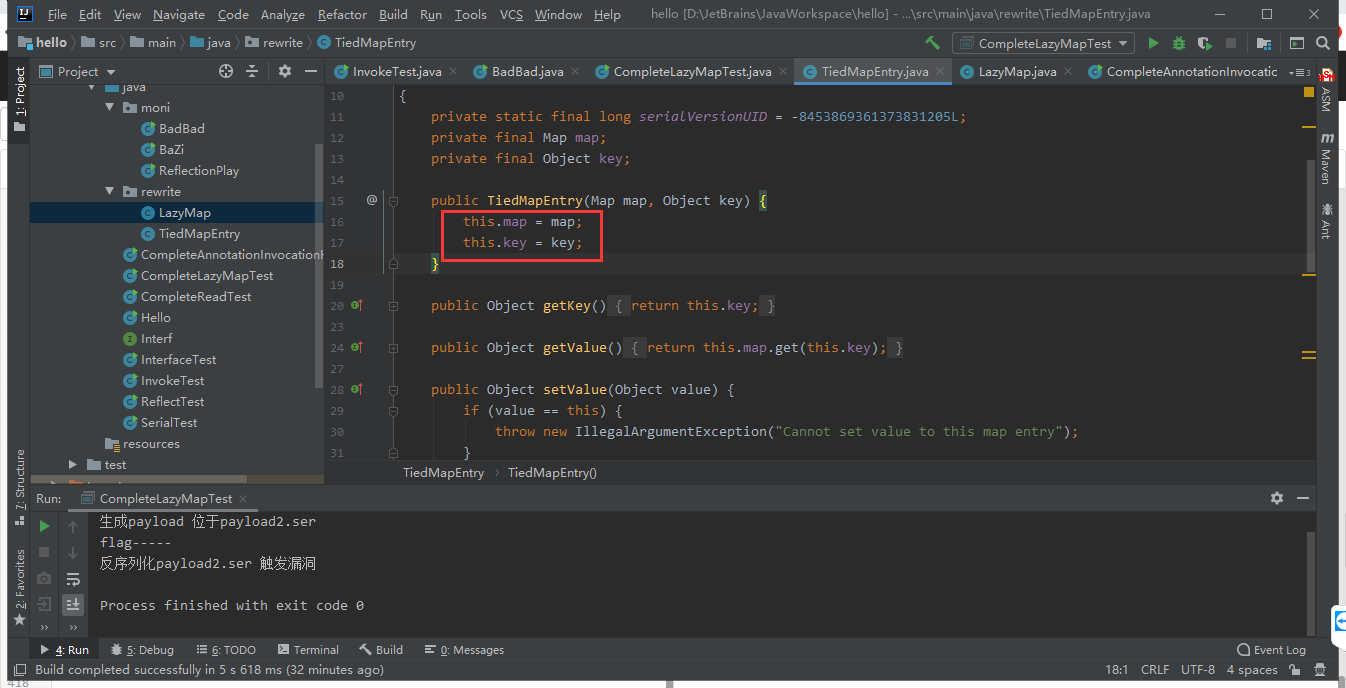 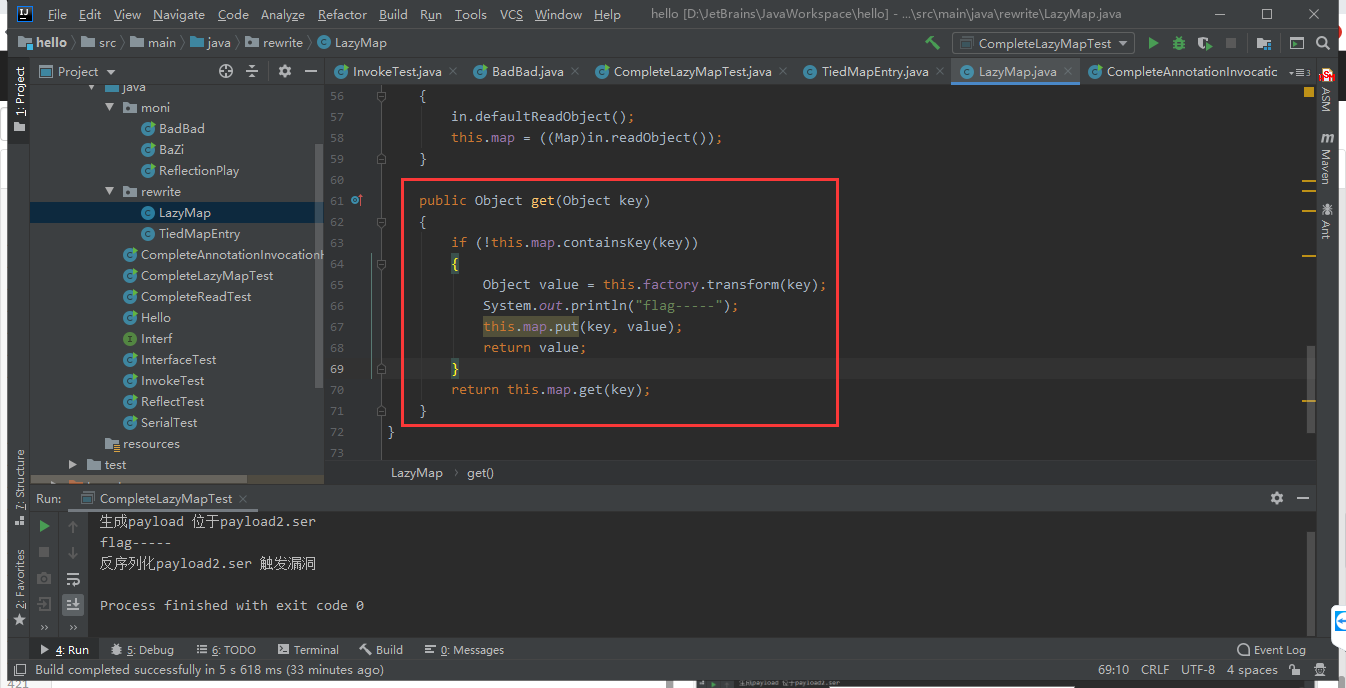 According to this principle, we can customize our own malicious objects. 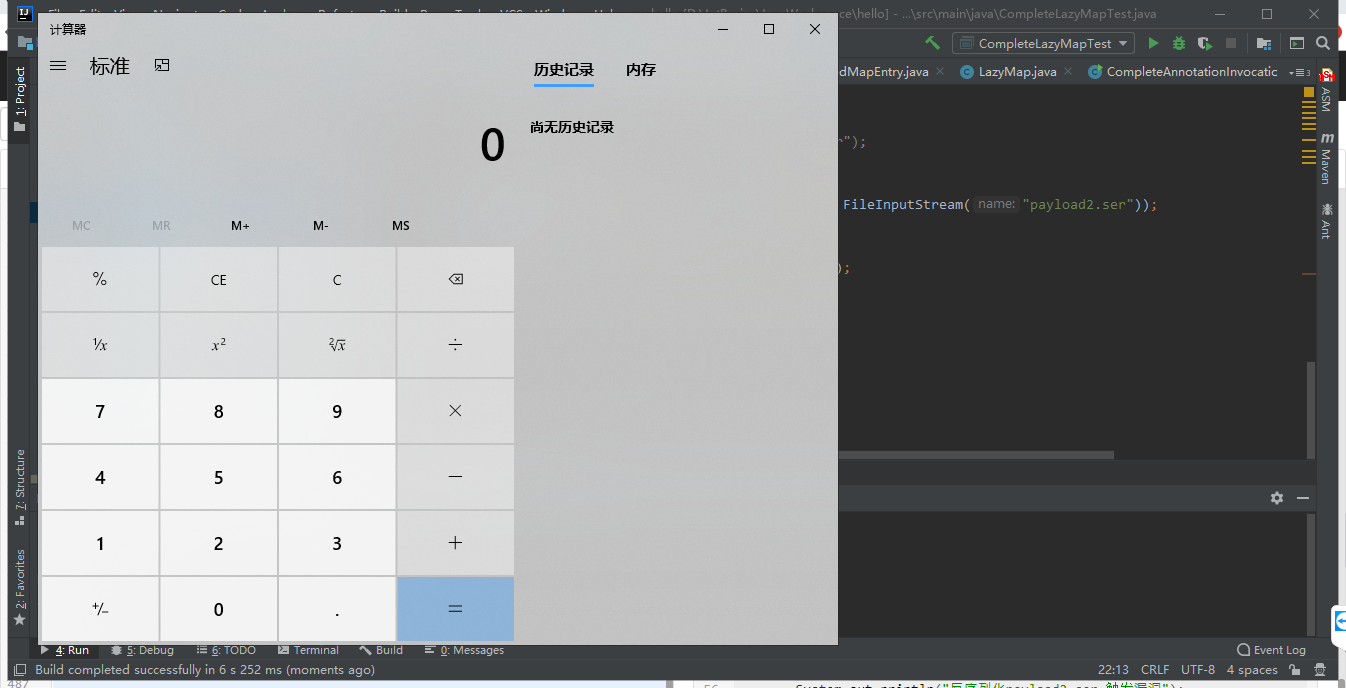