It is very convenient for Java to create a thread. It only needs new Thread(). However, when there are multiple tasks to be processed, frequent thread creation and enabling also requires system overhead and is not conducive to management. Therefore, like mysql connection pool, there is naturally a thread management pool, that is, thread pool.

As an analogy, a thread pool is like a company, so threads themselves are employees to manage the creation and destruction of threads and maximize the rational scheduling of resources.

The creation of Java thread pool is also very simple. Executors are included in the concurrent package, which can easily create four common threads:

newFixedThreadPool: creates a thread pool with a fixed number of threads, which can control the maximum number of concurrent threads. It is often used to know the number of specific tasks. Multi threading operations are required, such as batch inserting database tasks. 100000 data pages are required. One thread is configured for every 10000 data pages. A total of 10 threads are configured for parallel batch inserting, You can use this thread pool to greatly reduce the response time

newCachedThreadPool: create a thread pool that can be reused for a period of time. It is often used when the specific number of tasks is unknown but parallel processing is required. For example, springboot @Aysnc can specify to use this thread pool for asynchronous processing of various businesses such as buried points

Newsinglethreadexecution: create a thread pool for a single thread. This thread pool can restart a thread after the thread dies (or when an exception occurs) to continue executing instead of the original thread!

newScheduledThreadPool: create a thread pool that can be executed regularly and repeatedly, which is commonly used for the execution thread pool of scheduled tasks and delayed tasks

Of course, the thread pool can also be customized. Java only provides several common methods for creating static thread pools. The source codes of the four thread pools have been shown above. It can be found that the creation of thread pools is realized through new ThreadPoolExecutor(). Now we mainly introduce the following important parameters and interfaces:

The meanings of the parameters in the constructor are explained below:

Note that these parameters are modified by volatile to ensure the visibility under multithreading. We can also generate the thread pool we need according to different configurations of these parameters. 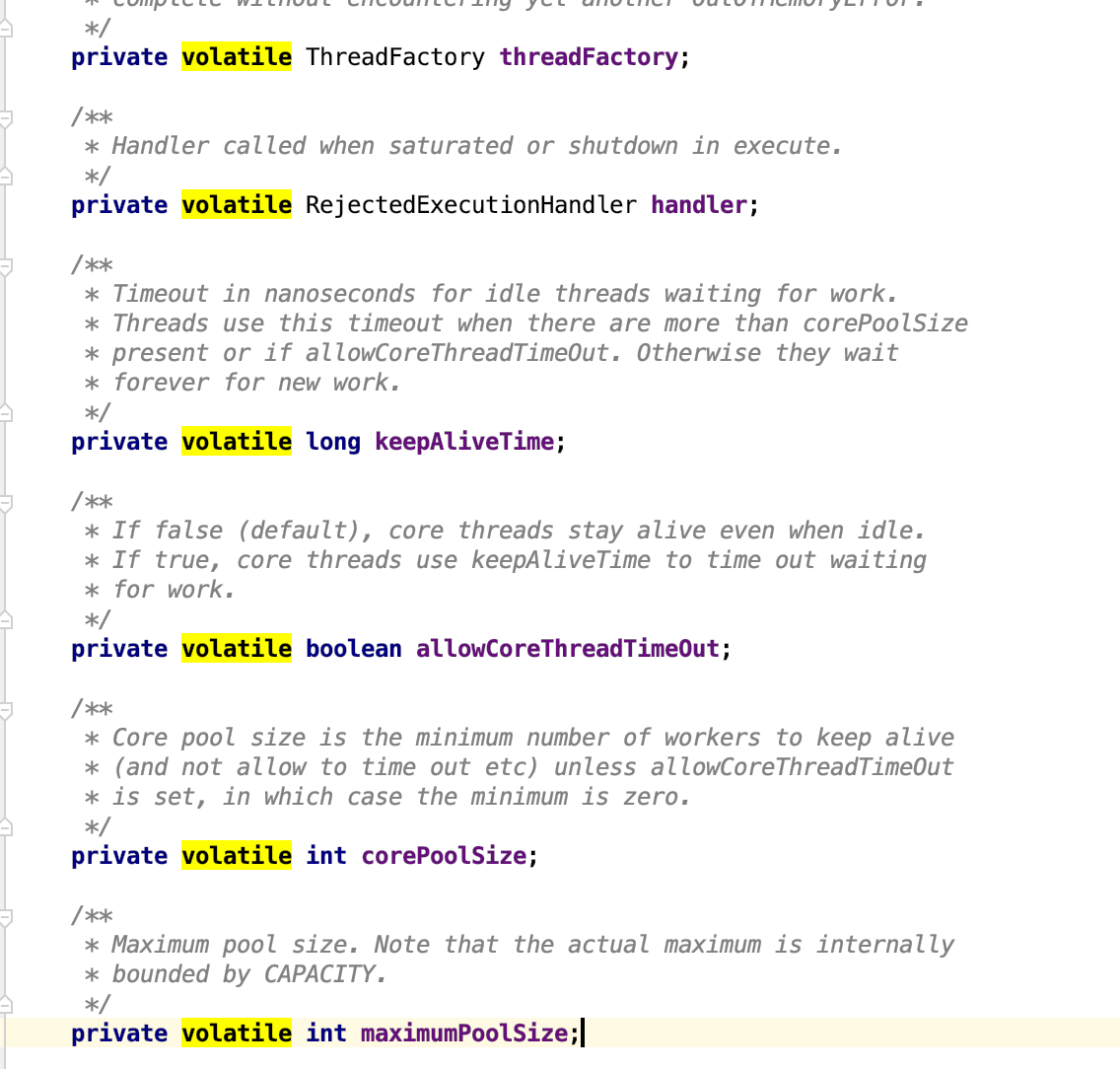 After having a thread pool, we need to pay attention to the status of several thread pools:

The following figure shows the transformation relationship between several states:

Next is a chestnut to show how to use:

After executing the above code, we actually created a thread pool with 15 core threads, the maximum is 15 threads, the storage time of idle threads is 1 minute, infinite blocking queue is adopted, and AbortPolicy is adopted for task rejection: discard the task and throw RejectedExecutionException exception. After creation, no active thread workers are generated, and the number of available threads is 0. For example, if 10 tasks come in, 10 thread workers will be created to work, and they will not be destroyed after work. Then there are 10 tasks, and the previous 10 threads have not completed their own tasks, At this time, five thread workers will be created to process the tasks. If there is any doubt about it, what about the remaining five tasks? By the way, there is a blocking queue. These tasks without workers will enter the blocking queue like to-do items, first in, first out, and be processed in turn after 15 workers finish their work, Because the blocking queue is an unbounded blocking queue, tasks will be continuously thrown into the queue. Therefore, it will not be created. Because the queue is too small, several temporary workers have to be created to process. These numbers are the difference between the maximum thread and the core thread. The effective time of these temporary threads is only keepAliveTime, In addition, after multiple tasks arrive, if the queue is bounded and the number of tasks exceeds the maximum number of threads that can be created, that is, workers can no longer be recruited and the to-do list is full, the company will quit, throw an exception and reject the task policy.

Next is the actual combat, which is displayed in combination with completable future:

You can see that 15 time-consuming operations are completed in parallel soon, and the number of successful results can be returned

The above is my understanding and application of thread pool. Welcome to pay attention, browse and ask questions. Thank you