Deadlocks and recursive locks (both threads and processes, understand)

When you know that the use of locks requires the release of locks, you are also extremely prone to deadlocks when operating on locks (the entire program gets stuck)

Semaphores may correspond to different technical points at different stages

Some processes/threads need to wait for others to finish running before they can run, similar to signaling

Every time a person starts a process or thread to process

Collaboration for TCP server side concurrency

So far, all four IO Model s have been described. Now go back and answer the first few questions: what is the difference between blocking and non-blocking, and what is the difference between synchronous IO and asynchronous IO.
First answer the simplest one: blocking vs non-blocking. The differences between the two are clearly illustrated in the previous introduction. Calling blocking IO keeps the corresponding process blocked until the operation is complete, while non-blocking IO returns immediately when the kernel s are ready for data.

It might be said that non-blocking IO is not blocked. Here's a very "tricky" place where "IO operation" in the definition refers to real IO operations, such as the recvfrom system call in the example. When non-blocking IO executes the recvfrom system call, it will not block the process if the kernels'data is not ready. However, when the data in the kernels is ready, recvfrom copies the data from the kernels into user memory, at which point the process is blocked, during which time the process is blocked. Unlike asynchronous IO, when a process initiates an IO operation, it returns directly and ignores it until kernel sends a signal telling the process that IO is complete. Throughout this process, there is no block at all.

A comparison of the IO Model s is shown in the figure: 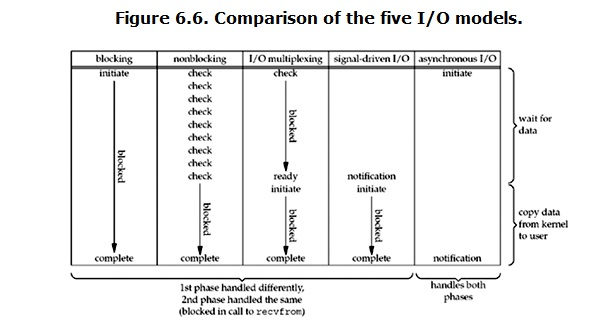 The differences between non-blocking IO and asynchronous IO are obvious as described above. In non-blocking IO, although a process is not blocked most of the time, it still requires the process to actively check, and when the data is ready, it also requires the process to actively call recvfrom again to copy the data to user memory. Asynchronous IO is completely different. It's like a user process handing over the entire IO operation to someone else (the kernel) and signaling when that person finishes. During this time, the user process does not need to check the status of the IO operation or actively de-copy the data.