Prometheus in each scene_ During the interval, the executed jobs will be detected, and these jobs will generate a target list according to the specified service discovery configuration;

The configuration tag will be reused in the captured life cycle to generate other tags. For example, the default value of the instance tag on the indicator comes from__ address__ The value of the label.

Prometheus provides the opportunity to re mark the found targets. You can configure the relabel in the job section_ Configure in configs. It is usually used to filter the target and attach the information in the metadata tag to the tag of the indicator.

The data capture of Prometheus Server is based on the Pull model. Therefore, it must know the location of each target in advance before it can capture data from the corresponding Exporter or Instrumentation.

For small system environments, use static_configs can solve the problem by specifying each target, but in medium and large-scale system environments or cloud computing environments with strong dynamics, static configuration is difficult to adapt. Prometheus has specially designed a set of service discovery mechanisms to automatically discover, detect and classify targets that can be monitored and update changed targets based on the service registry. 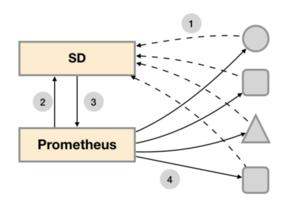 File based service discovery, which does not depend on any platform or third-party services, is the simplest and most common implementation. The configuration file format is as follows

The contents of dynamic discovery files are usually generated by another system. Configuration management systems such as Ansible, Saltstack or Puppet can also be generated by scripts based on regular queries in the CMDB system.

Service discovery based on Kubernetes API

The Service discovery mechanism based on Kubernetes API supports monitoring resource objects under resource types such as Pod, Service, Endpoint, progress and Node in API Server as target s. These resource objects are defined by their own discovery mechanisms. They are responsible for discovering the components of each type of resource object. In Prometheus, they are called a role (not a role in Kubernetes). It also supports Node deployment based on the DaemonSet controller on the cluster_ After the exporter, all nodes are found.

Prometheus's node role regards each node in the cluster as a target, and these nodes listen to the ports used by Kubelet. The node role will retrieve the NodeInternalIP, NodeExternalIP, NodeLegacyHostIP and NodeHostName on the node specification in turn, and take the first address found as the target address__ address__.

The value of the instance tag on the node is taken from the node name found in the API Server.

Prometheus's service role is responsible for discovering each service resource on the cluster. Each port declared on the service will be regarded as a target, and the address is the DNS name of the service and the corresponding port.

Prometheus' pod role is responsible for discovering each pod resource in the cluster and exposing its container as target. Each port on the pod will be regarded as a target, and a "no port" type target will be created for containers that do not specify a port, so that users can manually add ports through the relax function.

The configuration file can refer to this link