I've wanted to write it for a long time, but there is a series of redis source code learning in front of me, which has been dragging on.
When I was studying protobuf, I saw a blog on the Internet. It was very good, but it was inserted as follows: fixed focuses on time and int focuses on space compared with int. So if you have requirements for space performance, use int.

Then I really believed it. Then I changed all int32 in the project agreement to fixed32, and gave me a meal of fierce operation.

Later, due to the incompleteness of the previous study, I went to the official website of protobuf to check the official documents and wanted to see if the man was right. Good guy, turn around. People just say that if there are frequent businesses in large numbers, consider using fixed. They don't say which is fast and which is slow...

Then I was confused. You know, my bishrie is almost decimal (less than 8 digits). Is what he said right or wrong???

Think about it. Let's see what's written in the source code. 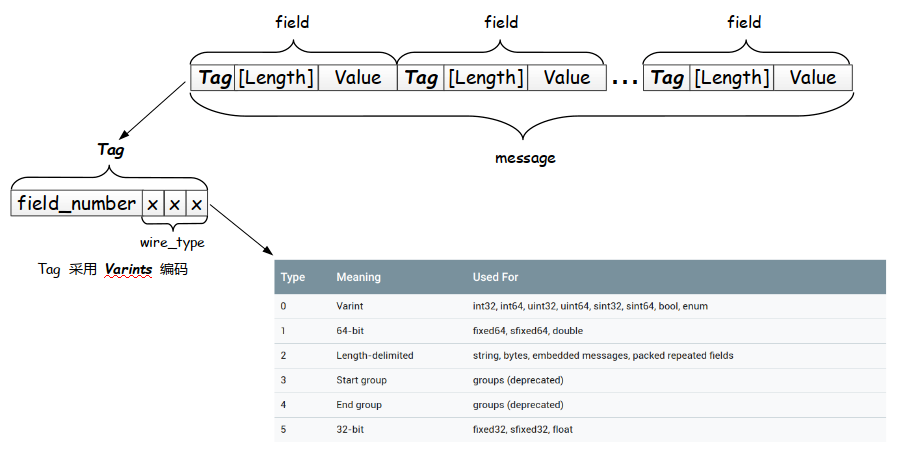 The [Length] here is optional. It means that different types of data coding structures may become in the form of Tag - Value. If it becomes such a form, how can we determine the boundary of Value without Length?

Note that the two types of Start group and End group have been abandoned.

There will be some special coding (ZigTag coding) for sint32 and sint64, which is equivalent to two different codes in the coding type of Varint.

Now let's simulate that we have received a series of serialized binary data. We first read a Varints encoding block, decode Varints, and read the last 3 bit s to get wire_type (so we can know which code the following Value adopts), and then obtain the field_number (so we can know which field it is). According to wire_type to correctly read the following Value. Then continue to read the next field field

Decoding process:
msb = 0 in the Varints code of the number 1, so you only need to read the first byte without reading it again. After removing the msb, the remaining 000 0001 is the reverse order of the complement, but there is only one byte here, so there is no need to reverse. Directly explain the complement 000 0001 and restore it to the number 1.

The number 1 is encoded here, and Varints uses only 1 byte. Under normal circumstances, int32 will use 4 bytes to store the number 1.

msb actually plays the role of Length. Because of msb (Length), we can get rid of the original dilemma that four bytes must be allocated regardless of the size of the number. With Varints, we can make small numbers represented in fewer bytes. Thus, space utilization and efficiency are improved.

Not much to say, let's take a direct example:

Note that because a negative number must be set to 1 in the highest bit (sign bit), this means that a negative number must occupy all bytes anyway, so its complement always occupies 8 bytes. You can't remove the extra high bits (all 0) like a positive number. With msb, the final result of Varints encoding will be fixed at 10 bytes.

That's why it's not good to store negative numbers directly with int in protoc ol.

It is recommended to store negative numbers. When using sint, ZigZag coding is adopted by default.

In fact, you can see from a picture:

The "mapping" here is realized by shift.

When boolVal = false, the encoding result is null.
Here is another trick ProtoBuf does to improve efficiency: specify a default value mechanism, and set the value of the field as the default value when the read field is empty. The default value of bool type is false. That is to say, if false is encoded and then transmitted (one byte is consumed), it is better not to output any encoding result directly (empty). When the terminal parses and finds that the field is empty, it will set its value as the default value (i.e. false) according to the regulations. In this way, space can be further saved and efficiency can be improved.

The encoding result of repeatedInt32Val field is:

Nested fields are not mentioned above because:

According to the meta information (i.e. the. Proto file, when compiled with protoc, the. Proto file will be compiled into a string and saved in the code xxx.pb.cc), you can distinguish whether the field is a nested field. In short, you can't decode information directly from Pb binary data. You must have Proto files. Just at the code level Proto files have existed in some form in the client code generated by protobuf since the time of protoc, and the code can be obtained at any time Meta information expressed in the proto file, such as whether a field is a nested field.

The title of the article is to explore the source code, isn't it. Yes, we have to put some code out.

When a Message calls SerializeToString, it will eventually call the underlying key encoding function WriteVarint32ToArray or WriteVarint64ToArray after layers of calls. The whole process is shown in the following figure: 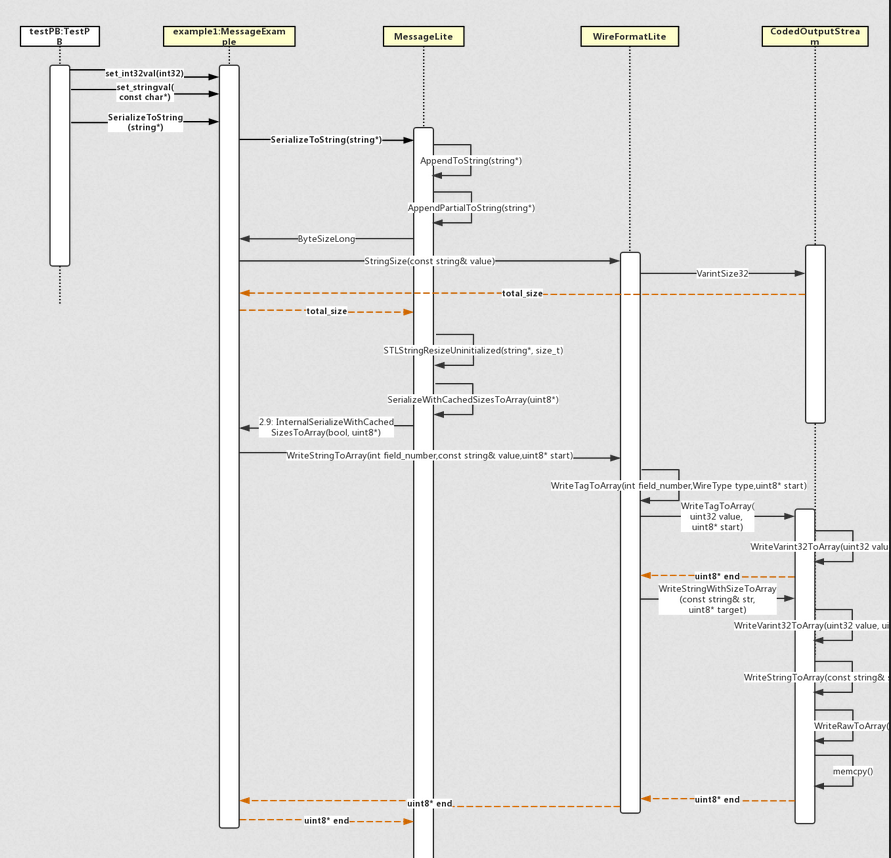 On the coding of fixed family

Will this be fast? Don't look at the while above and think others are slow.

Because its encoding structure is Tag - Length - Value, the complete serialization of its fields will be a little more process: 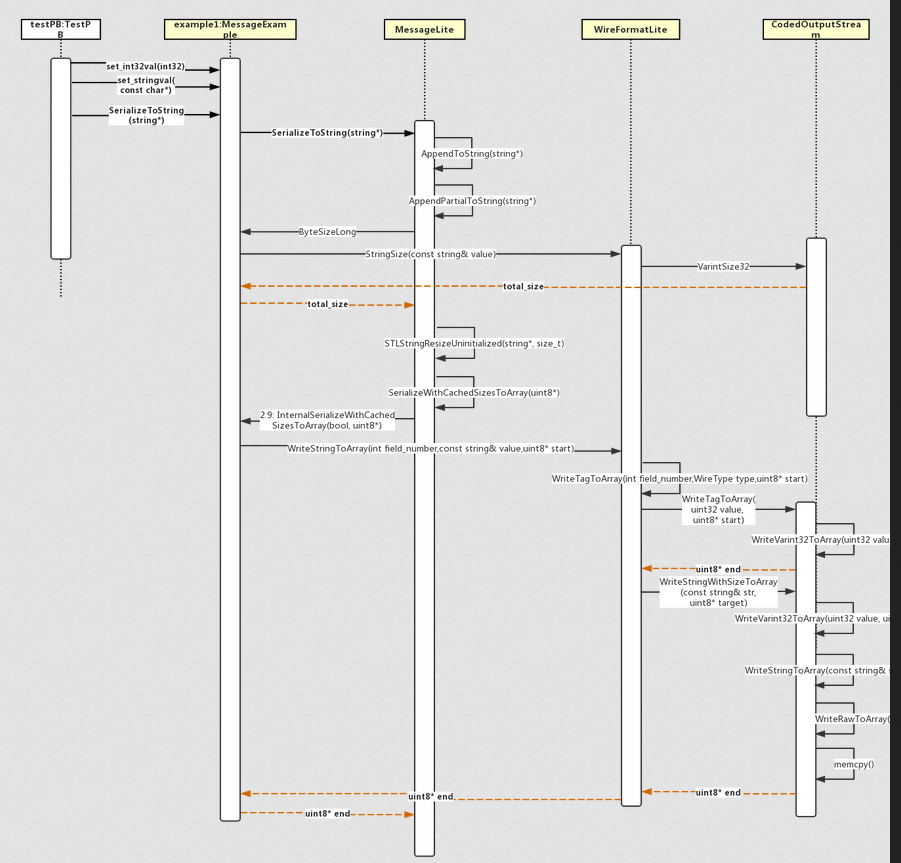 Several key functions of its serialization implementation are: