Python is not the mainstream development language in the area of block chains or digital currency.But if your goal is to study the principles of block chain technology, or if you need to simulate a block chain network on your own notebook and do some research experiments, such as completing your own graduation design project or scientific research project, then Python is appropriate.In this tutorial, we will learn how to develop a multinode block chain network from scratch using Python, and develop a de-centralized data sharing application based on this simulated block chain network.

The complete source code for this tutorial can be downloaded here: https://github.com/ezpod/python-blockchain-sim

1. Python simulation block chain: save transactions in batches with blocks

First, we need to save the data in JSON format into the block chain.JSON is a common cross-language data exchange format, such as the JSON representation of a blog that looks like this:

In the area of block chains, we often use transactions instead of the data mentioned above.Therefore, to avoid confusion and consistency, in this tutorial we will use the term transaction to represent the data to be stored in the block chain.

Transactions are packaged in blocks, which can contain one or more transactions.Blocks containing transactions are periodically generated and joined to the block chain.Because there are many blocks, each block should have a unique ID.Here is our Block class definition code for the Python simulation block chain:

One feature of block chains is that transactions stored in blocks cannot be tampered with. To achieve this feature, it is necessary to be able to detect the tampering of block data first.To do this, we need to use Hash functions in cryptography.

So we can guarantee:

Obviously, deriving hashes from input data is simple, but deriving input data from hashes is almost impossible. This asymmetric value is the key to block chains to obtain the desired tamper resistance.

There are currently many popular hash functions, the following is a Python example using the SHA-256 hash function:

Notice in the example above that a slight change in the input data results in a completely different hash!

In the Python simulation block chain project of the tutorial, we will save the block hash as a field of the block and use it as a Digital Fingerprint, or Signature, of the block data.

Here is the Python implementation code for calculating the block hash:

Note: In most digital cryptographic currency implementations, each transaction in a block also needs to compute a hash and use a tree structure (merkle tree) to compute the root hash of a set of transactions.However, this is not necessary for block chains, so this feature is ignored for the time being.

3. Python simulation block chains: linking blocks one by one

Okay, now that we have a Python implementation of the block class Block, let's see how to implement the block chain structure with Ptyhon.

Block chains are collections of blocks, and we can use Python lists to hold all the blocks.This is not enough, however, because data can also be tampered with if someone deliberately replaces a new block in the collection with an earlier one.

We need a way to ensure that modifications to earlier blocks will invalidate the entire block chain.Bitcoins are used by letting the hash of the back block depend on the earlier block.To link blocks together, we need to add a new field to the block structure to hold the hash of the previous block: previous_hash.

Now, if any of the earlier blocks are modified, then:

But there is one more problem.If we modify the previous block, and if recalculating the other blocks behind is very simple, tampering with the block chain is not a problem.To avoid this problem, we can use the asymmetry of the hash function mentioned earlier to make block hash calculation more difficult and random.What we need to do is accept only block hashes that meet certain constraints.Now let's add a constraint that requires at least n zeros at the beginning of the block hash, where n is a positive integer.

We know that the block hash will not change unless the content of the block data is changed, and of course we do not want to modify the existing data.So what should we do?It's simple!Let's just add some more data that we can modify at will.So we need to add a new field nonce to the Block class. We can change the value of this field to get different block hashes until the specified constraint is met, and the nonce value is proof of our workload.

This process is a simplified version of the hashcash algorithm used by Bitcoin.The number of leading zeros specified in the constraint determines the difficulty of our workload proof algorithm: the more leading zeros there are, the harder it is to find a suitable nonce.

At the same time, due to the asymmetry of hash functions, the workload proved not easy to calculate, but easy to verify.

Here is the Python implementation code for the workload proof algorithm (PoW:Proof of Work):

It should be pointed out that there is no simple logic to quickly find nonce values that meet the constraints, so only violent calculations can be performed.

To add blocks to the block chain, we first need to verify that:

Now let's look at the Python implementation code that chains blocks up:

The transaction begins with a pool of unacknowledged transactions.The process of putting unrecognized transactions into blocks and calculating workload certificates is known as mining.Once we have found a nonce that meets the specified constraint, we can say we have dug a block with more than one chain.

In most digitally encrypted currencies, including bitcoins, miners are rewarded with an encrypted currency in return for the effort they put into proving their computational effort.Here is the Python implementation code for our mining function:

Now it's time to add API interfaces to our emulated block chain nodes so that applications can use these APIs to develop specific applications.We'll use Flask, the popular Python microframework, to create the REST API.If you've used other web frameworks before, the code below should not be difficult to understand, and don't worry if you haven't been exposed to them. Here's a great one Flask Tutorial:

We need an access end node that can submit new transactions so that our applications can use this API to add new data to the block chain.The following is the Python implementation code for the node's/new_transaction access end node:

Another end node/chain can return data from the block chain.Our application will use this API to query the data to display.Here is the Python implementation code for this end node:

Mining is CPU intensive, so instead of letting the nodes keep mining, we provide an access end node/min to provide on-demand mining services.Here is the Python implementation code:

These REST access end nodes can be used to manipulate our block chain, such as submitting transactions and then confirming them through mining.

So far, the simulation block chain that we have implemented from zero using Python is running on one computer.Even though we've used hashes to link blocks back and forth and applied workload proof constraints, we can't trust just a single node.We need to implement distributed data storage and we need multiple nodes to maintain the block chain.So in order to move from a single node to a P2P network, let's start with
Create a mechanism for nodes on your network to understand each other.

First, define a new access end node/register_node to register the new node in the network.Here is the Python implementation code:

Newly joined nodes can be registered by calling the register_with_existing_node method with the/register_with endpoint end node.This helps to solve the following problems:

However, when there are multiple block chain nodes, a problem needs to be solved: block chains on different nodes may be different from each other, whether intentional or unintentional (such as network latency).In this case, an agreement needs to be reached between nodes on the version of the block chain in order to maintain consistency across the system.In other words, we need to reach a consensus.

When block chains on different nodes are differentiated, a simple consensus algorithm is to select the longest valid chain.The rationality behind this approach is that the longest chain contains the largest number of proven calculations that have been put into work.The following is the Python implementation code for the Longest Chain Consensus algorithm:

Now, we need to provide a Python method for nodes to broadcast this message to other nodes when they dig out blocks so that each participant in our network of simulated block chains can update their local block chains and then dig the next block.It is easy to receive a block broadcast node to verify the workload proof, and then add the received block to its own local chain.

The following is the Python implementation code for the node's/add_block access end node:

The announce_new_block method should be called when the block is dug out so that other nodes can update their locally saved copies of the block chain:

Okay, now our node software for simulating block chains has been developed.Now you need to develop an application's user interface.We use the Jinja2 template to render the page and some CSS to make it look nice.

Our applications need to connect to a node in this network of simulated block chains to get data or submit new data.Here is the Python code for the initialization part of the application:

The fetch_posts method uses the node's/chain end node to get data, parse data, and save it locally:

The application uses an HTML form to receive user input and then adds transactions to the unacknowledged transaction pool of the connected node using a POST request.The transaction is then confirmed by our simulation block chain network and eventually read again when the web page is refreshed:

It is finally completed.You can view this on github Python simulation block chain Complete source code.

Now one of our simulation block chain node instances is started and listening on port 8000.

Open another terminal to run our de-centralized application:

Now that the application is started, you can access it from this web address: http://localhost:5000.

The following diagram shows how to submit content to our simulation block chain using the web interface:

The following diagram shows how to start node mining using the web interface: 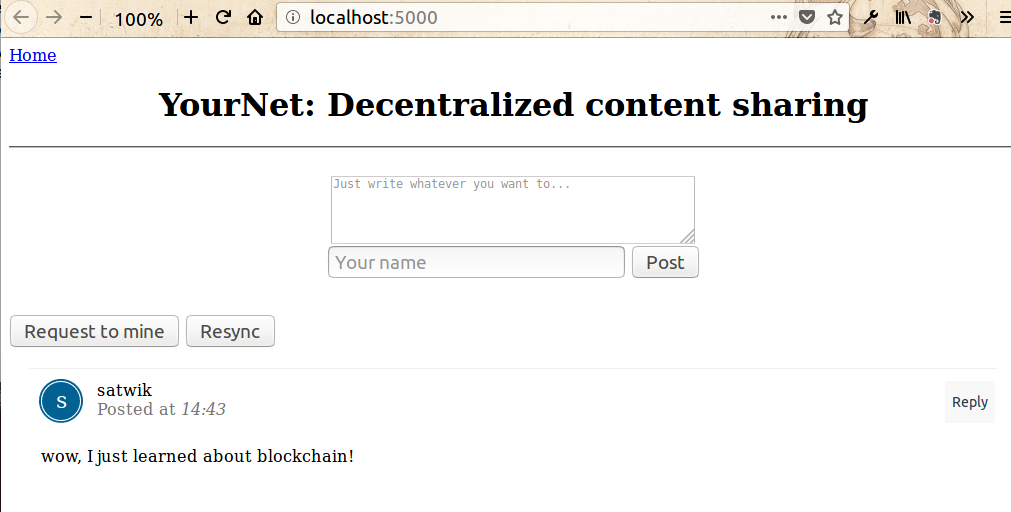 To run an emulated block chain network with multiple nodes, register_with/end nodes can be used to register new nodes in the network.

Below is a multi-node example scenario where we started three simulation nodes listening on ports 8000, 8001, and 8002:

You can use the following cURL requests to register two new nodes listening on ports 8001 and 8002:

This lets the nodes listening on port 8000 know that there are also 8001 and 8002 listening nodes, and vice versa.The newly added node will also synchronize block chain data from the original network node so that the new node can participate in subsequent mining processes.

To modify the block chain nodes for front-end application synchronization, you can modify the CONNECTED_NODE_ADDRESS field in the views.py file.

Once you've done that, you can run the application (python run_app.py) and create transactions through the web interface.When you dig, all nodes in the network update their local block chains.You can also use cURL s or Postman to view block chains using/chain end nodes.For example:

You may notice another flaw in our simulation block chain-based de-centralization application: anyone can submit anything at any time.One solution to this problem is to use asymmetric key technology to create user accounts.Each new user needs a public key (corresponding account name) and a private key to submit data in our application.Private keys are used to create signatures for data, while public keys are used to verify signatures for data. Here is how they work: