PyTorch has developed standard conventions for interacting with data, so it can process data consistently, regardless of image, text or audio. The two main conventions for interacting with data are dataset and data loader. Dataset is a Python class that enables us to obtain the data provided to neural networks. The data loader provides data from the data set to the network.

PyTorch through torch utils. Data encapsulates the commonly used data loading, which can easily realize multi-threaded data pre reading and batch loading. In addition, torchvision has implemented common image data sets in advance, including CIFAR-10, ImageNet, COCO, MNIST, LSUN and other data sets previously used, which can be accessed through torchvision Datasets are convenient to call.

Dataset is an abstract class. In order to facilitate reading, you need to wrap the data to be used as dataset class. A custom dataset needs to inherit it and implement two member methods:

DataLoader provides us with the operation of reading datasets. The common parameters are:

The DataLoader returns an iteratable object. We can use the iterator to obtain data in stages:

The common usage is to use the for loop to traverse it:

torchvision.models: torchvision not only provides common image data sets, but also provides trained models, which can be loaded and used directly, or in the process of migration and learning torchvision The sub modules of the models module contain the following model structures- AlexNet - VGG - ResNet - SqueezeNet - DenseNet.

In calculus, we find the parameters of multivariate functions

To find the partial derivative, the gradient vector is

We need to minimize the loss function, which can be solved step by step iteratively through the gradient descent method to obtain the minimized loss function and the value of model parameters. 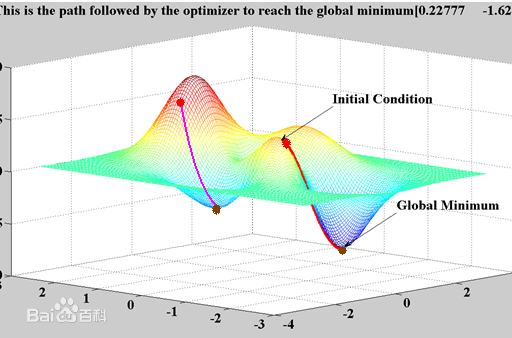 If we go on like this, we may not be able to go to the foot of the mountain, but to the lower part of a local peak (local optimal solution).

This method is used for training in PyTorch. You can see batch in the introduction to dataloader_ Size is the size of our mini batch. 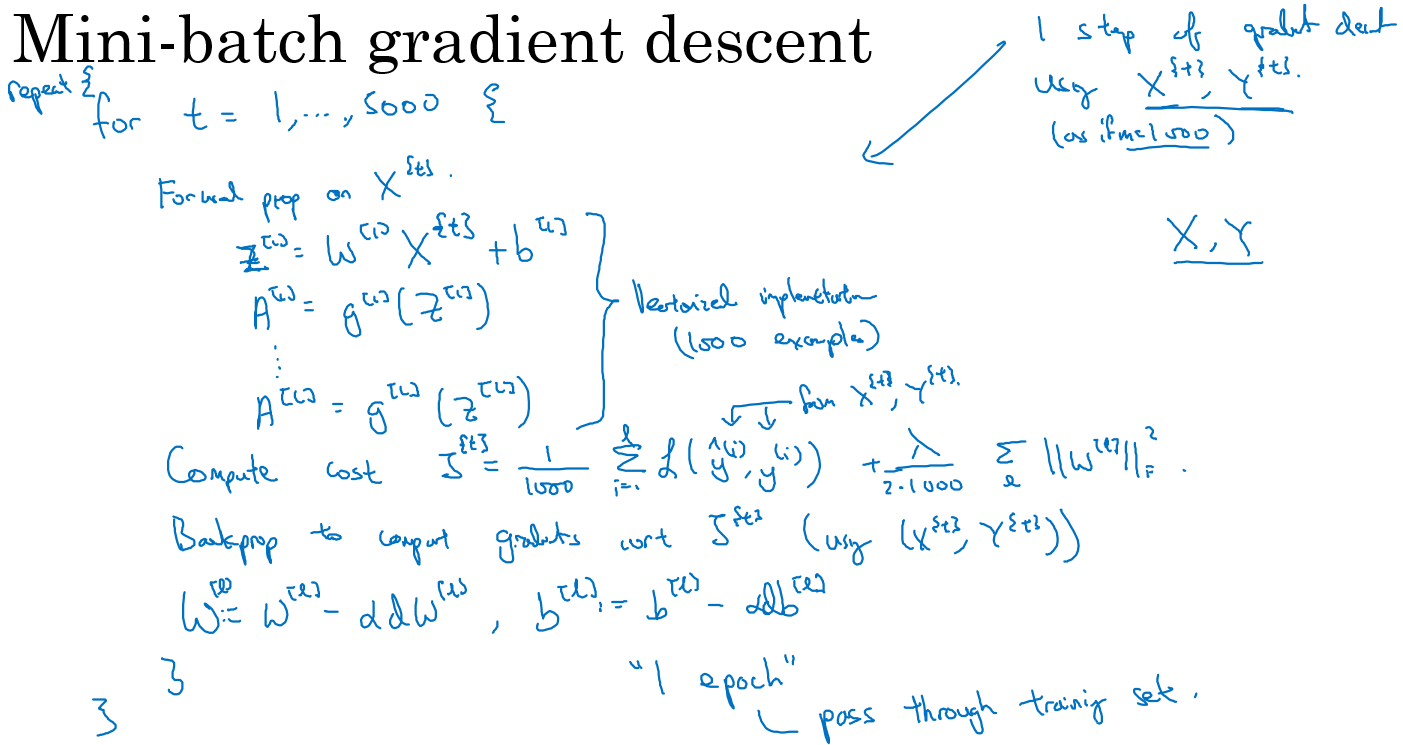 - if the size of training samples is relatively small and can be read into memory at one time, we don't need to use mini batch.

- if the size of the training sample is relatively large and cannot be read into the memory or existing at one time, we must use mini batch to calculate in batches - the calculation rules of mini batch size are as follows, and the size to the nth power of 2 is used when the maximum memory is allowed. 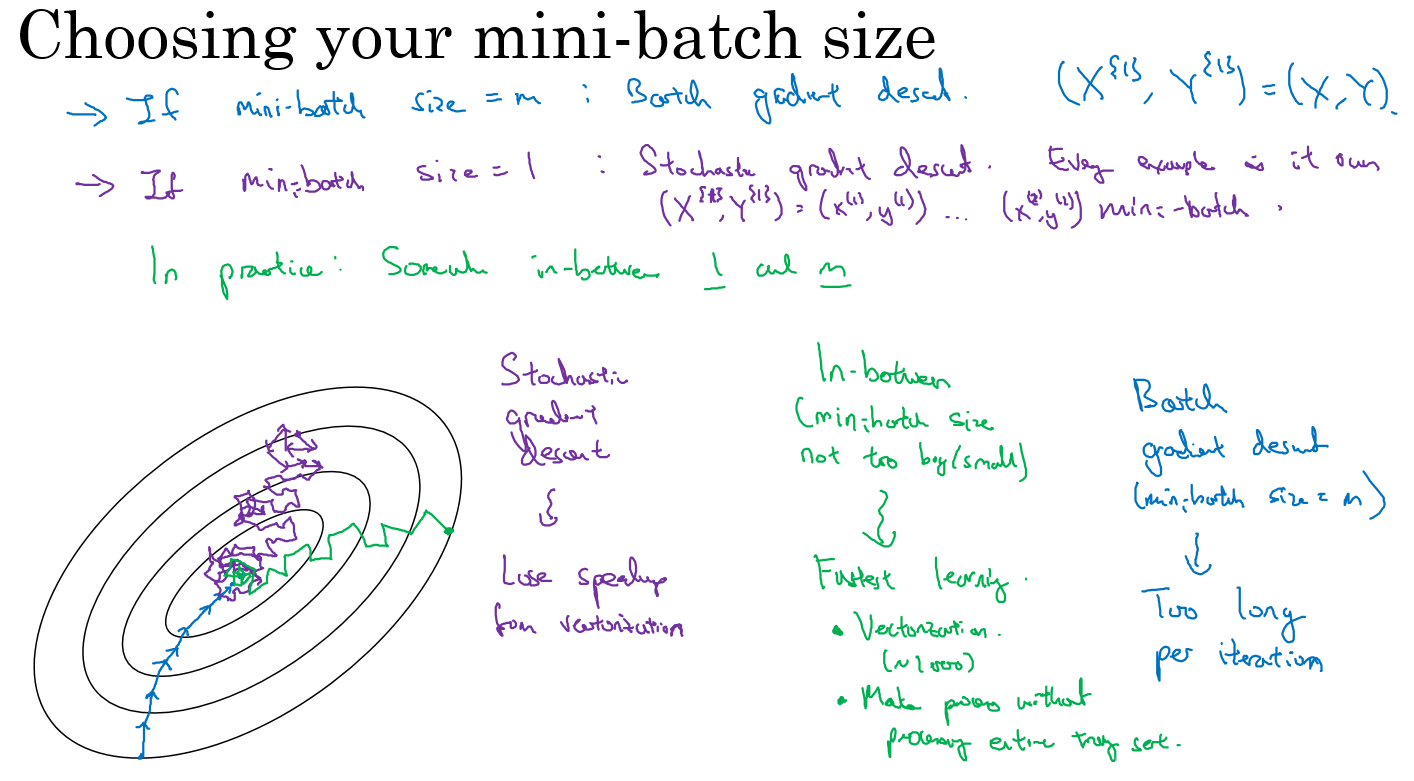 Random gradient descent algorithm. The algorithm with momentum can be set as an optional parameter. The example is as follows:

Variance measures the change of learning performance caused by the change of the training set of the same size, that is, the generalization ability of the model.

high bias: it is generally called underfitting, that is, our model does not adapt well to the existing data, and the degree of fitting is not enough.

high variance: it is generally called overfitting, that is, the fitting degree of the model to the training data is too high and the generalization ability is lost.

Next, we need to convert them into a format that PyTorch can understand. There is a class named ImageFolder in the torchvision package, which can do everything for us. As long as our images are in an appropriate directory structure, each directory is a label (for example, all cats are in a directory named cat):

Adjust the image size to 64 * 64, which is adjusted at will, so that the next first network can calculate quickly. Generally speaking, most existing frameworks use 224 * 224 or 299 * 299 image input. The larger the input size, the more data the network learns, but usually the GPU memory can hold a small batch of images.

torchvision allows you to specify a list of transformations that can be applied before the image is input to the neural network. The default conversion is to convert the image into a tensor (transforms.ToTensor() method), and you can also do some work that may not seem obvious.

One danger of deep learning is over fitting: your model can really identify the trained data well, but it can't be generalized to examples it hasn't seen. When it sees an image of a cat, the model will not think of it as a cat, even though they are cats, unless the images of other cats are very similar to this image. In order to prevent this problem in the network, a verification set is prepared, which is a series of images of cats and fish that do not appear in the training set. At the end of each training cycle (epoch), we compare it with this verification set to ensure that our network does not make mistakes.

In addition to a verification set, you also need to create a test set, which will be used to test the model after all training is completed.

To create a data loader:

batch_size: how many images will be provided to the network before training and updating the network. In theory, batch_size is set to the number of images in the test and training set, so that the network will see each image before updating. But in practice, we don't do this because smaller batches require less memory than storing all the relevant information of each image in the dataset, and smaller batches will make the training faster so that we can update the network faster.

PyTorch's data loader will batch_size is set to 1 by default, and you will almost certainly change this. You can also specify how the dataset is sampled, whether the dataset is disrupted at each run, and how many work processes are required to fetch data from the dataset.

Neural network structure: an input layer, which processes the input tensor (our image); Another output layer whose size is the number of output categories (2); A hidden layer between the two; Full connection is adopted between layers. 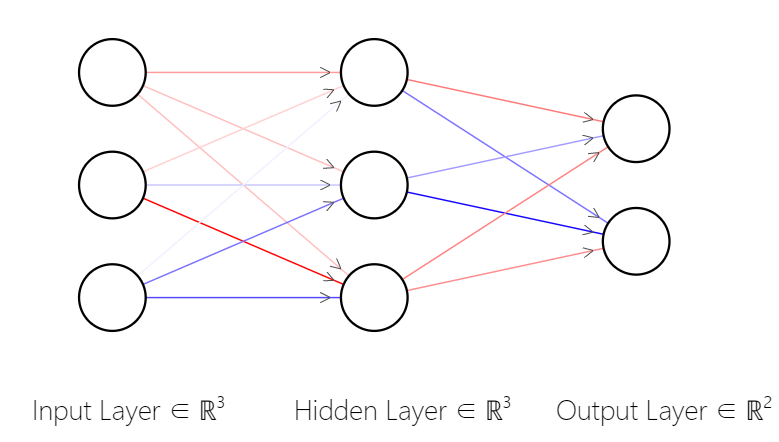 The neural network in the figure has an input layer with three nodes, a hidden layer with three nodes and an output layer with two nodes. It can be seen that in the full connection, each node will affect each node in the next layer, and each connection has a weight, which determines the strength of the signal from this node to the next layer (the main purpose of training is to update these weights, which usually starts with randomization). When an input is introduced into the network, the weight and the offset of this layer can be simply multiplied by the matrix.

To create a neural network in PyTorch, you need to inherit a named torch nn. Class of network, fill in__ init__ And forward methods:

The number of nodes in the hidden layer can be arbitrary, but the number of nodes in the final output layer is required to be 2, which corresponds to our classification results. Generally speaking, you want the data in the layer to be compressed when passing down. For example, if a layer has 50 inputs to 100 outputs, the network only needs to transfer 50 connections to 50 of the 100 outputs when learning, and it is considered that its work is completed. Reducing the size of the output according to the input can require this part of the network to learn a representation of the original input with less resources, which often means that it will extract some features in the image that are important to the problem we want to solve.

One of the important improvements made by Adam (and RMSProp and AdaGrad) compared with SGD is to use a learning rate for each parameter and adjust the learning rate according to the change rate of these parameters. It will maintain a list of exponentially decaying gradients and the squares of these gradients, and use them to adjust the global learning rate used by Adam. According to experience, Adam is far better than most other optimizers for deep learning networks, but you can also replace Adam with SGD or RMSProp.

Reuse the previous conversion pipeline and replace the image with the correct form suitable for this neural network. However, since our network uses batches, it actually wants to get a 4-dimensional tensor, and the first dimension indicates different images in a batch. We don't have a batch, but we can use unsqueeze(0) to create a batch with a length of 1. This time, we add a dimension at the front of the tensor.

It is very simple to get the prediction results. We only need to input our batch into the model, and then find the class with high probability. Here, you can simply convert the tensor into an array and compare the two elements, but there are usually more elements. PyTorch provides a useful argmax() function, which returns the index of the maximum value in the tensor. Then use this index to access our tag array and print the results.

We can use save to save the whole model or just state_dict saves parameters. Use state_dict is usually preferable because it allows you to reuse parameters even if the structure of the model changes (or apply parameters from one model to another).