The container sequence stores the reference of the object, which can be of any type; Flat sequences store values, not references. As shown in Figure 2-1:

In the figure above, the container sequence is on the left and the flat sequence is on the right.
have... The gray grid represents the memory address header of each object.
On the left, for example, a reference array in which tuples have their contents. Each element is a separate Python object and may be a reference to other Python objects.
On the right, the array in Python is a separate object, holding three C language double type arrays.

Therefore, flat types are more compact, but are limited to storing original types, such as byte,integer,float, etc.

Another way to group sequence types is based on their variability:

Although the built-in Sequence types are not directly inherited from the two abstract base classes (ABC) of Sequence and MutableSequence, they are virtual subclasses registered on these ABC. As virtual subclasses, tuple and list can pass the following tests:

The most basic and commonly used sequence type is list. You should know its basic use. The list derivation is introduced directly below.

A quick way to build lists is to use list derivation or generator expressions (you can create any type of sequence).

The list derivation is more readable and faster than the traditional for loop.

Example 2: another way to change a string into a Unicode code point

However, when writing list derivation, ensure that the code is concise. If it is more than two lines, it may need to be rewritten into a for loop.

List derivation will no longer have the problem of variable leakage

List derivation and generator expressions have their own local scopes, just like functions. Variables and assignments inside the expression only work locally, while variables with the same name in the context of the expression can also be referenced normally, and local variables will not affect them.

However, it is not recommended to use variables with the same name in this way, which is easy to be confused and does not need to be saved.

List derivation builds lists from sequences or any other iteratable type, while filtering and transforming elements at build time. filter and map can do the same thing together, but the readability is not so good. As shown below.

List derivation can do everything that filter and map can do, and will not be limited by the change of lambda expression function.

Now let's look at how to use list derivation to calculate Cartesian product: the pairs of elements in two or more lists form tuples, and the list formed by these tuples is Cartesian product. 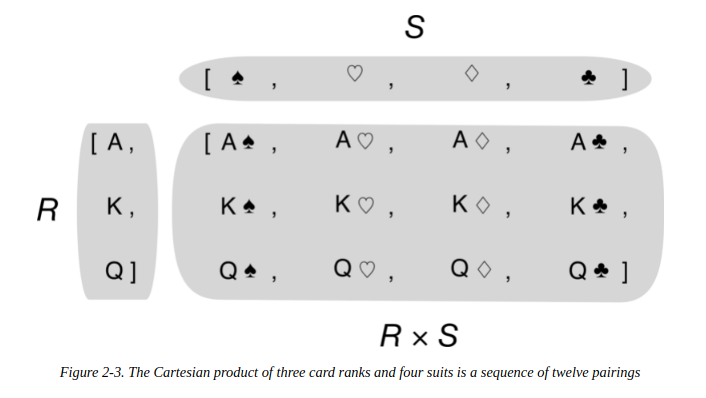 For example, suppose you need a list. In the list are three T-shirt s of different sizes, and each size has two colors. The following code shows how to generate such a list through list derivation. The return result is 2 × 3 = 6 2 \times 3=6 two × 3 = 6 elements:

Let's look at the same for loop writing:

You can also use list derivation to generate from size first and then color:

List derivation has only one function: generating lists. Generator representations come in handy if you want to generate other sequence types.

Tuples are not just immutable lists