set types are also used to hold multiple string elements
Unlike list types, duplicate elements are not allowed in a collection, and elements in a collection are out of order and cannot be retrieved through an index subscript

A collection can store up to 232-1 elements
Redis not only supports addition, deletion, and censoring within a set, but also supports intersection, Union and difference of multiple sets, and makes good use of set types.

For example, the following code creates an intset-encoded collection object

For example, the following code creates a hashtable-encoded collection object

When a collection object can satisfy both of the following conditions, it uses intset encoding

Be careful:
The upper limit of the second condition can be modified, see the description of the set-max-intset-entries option in the configuration file
For collection objects that use intset encoding, when either of the two conditions required for intset encoding cannot be met, the object's encoding conversion operation is performed, all elements that were originally stored in the integer collection are transferred and saved in the dictionary, and the object's encoding changes from intset to hashtable

For example, the following code creates a collection object that contains only integer elements and is coded as intset

In addition, if you create a collection object with 512 integer elements, the object's encoding should be intset

However, as long as a new integer element is added to the set, making the number of elements in the set 513, the object's encoding conversion operation will be performed 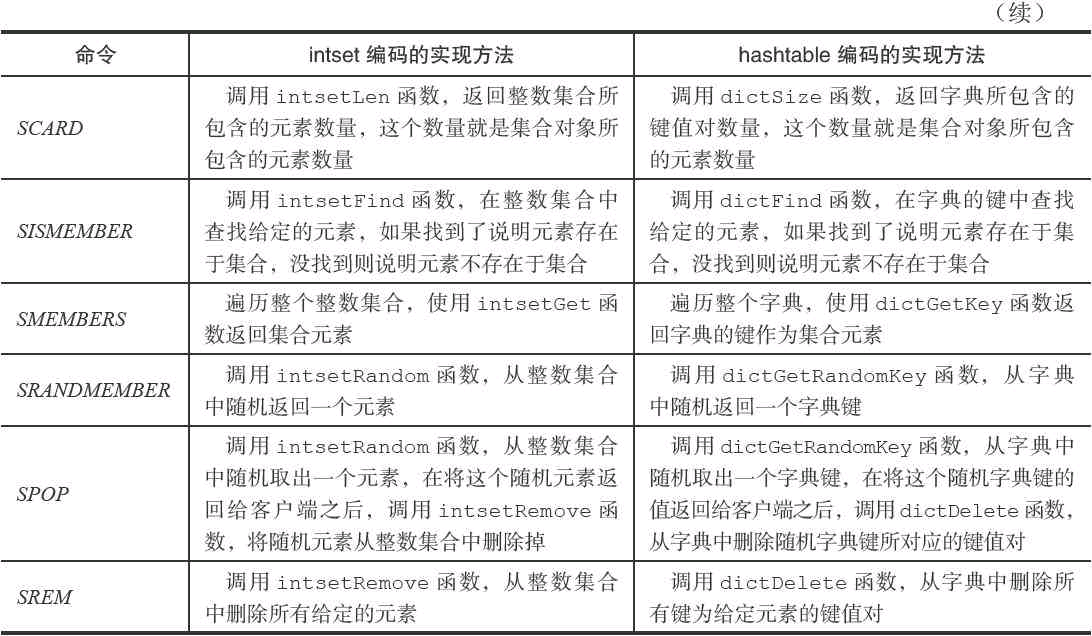 Returns the number of elements successfully added, such as

Returns the number of elements successfully deleted, for example

The time complexity of scard is O(1), which does not traverse all elements of the collection, but uses variables directly inside Redis

4. Determine if an element is in the set-sismember

5. Randomly returns a specified number of elements from a set - srandmember

[count] is an optional parameter if it is not written to default to 1, for example

A spop operation can randomly pop up an element from a collection, for example, the following code is a spop and the collection element becomes "d b a"

It is important to note that Redis started at version 3.2 and spop also supports the [count] parameter
Both srandmember and spop randomly select elements from a set, unlike srandmember, which deletes elements from the set after the spop command executes

smembers and lrange, hgetall are heavier commands, which can be accomplished using sscan if there is a possibility of blocking Redis with too many elements

1. Find the intersection of multiple sets-sinter

For example, the following code finds the intersection of two sets of user:1:follow and user:2:follow and returns the result sports, it

2. Seek the union of multiple sets-suinon

For example, the following code finds the union of two sets of user:1:follow and user:2:follow and returns the result sports, it, his, news, music, ent

3. Find the difference of multiple sets-sdiff

For example, the following code finds the difference between two sets of user:1:follow and user:2:follow and returns music and his

4. Save the results of intersection, Union and difference sets

Operations between sets can be time consuming when there are many elements, so Redis provides the three commands above (the original command + store) to save the results of intersections, unions, and differences between sets in destination key
For example, the following saves the result of the intersection of two sets of user:1:follow and user:2:follow in user:1_2:inter, and user:1_2:inter itself is a collection type

Typical usage scenarios for collection types are tag s
For example, one user may be more interested in entertainment, sports, and another in history, news. These are the tags.
With this data, you can get tags that people who like the same tag and users'common preferences. This data is important for the user experience and for enhancing user stickiness.

For example, an e-commerce website will make different types of recommendations for users with different labels, such as people who are interested in digital products, recommending the latest digital products to them on various pages or by email, which usually brings more benefits to the website.

Collection types are typically used in the following scenarios

The encoding of an ordered set can be ziplist or skiplist
Reading Reference: Redis Data Structure (6) - Compressed List ziplist

For example, if the following ZADD command is executed, the server will create an ordered collection object as the value of the price key 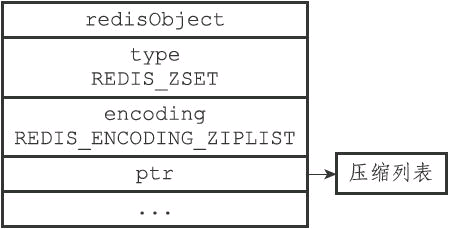 Skplist-encoded ordered collection objects use the zset structure as the underlying implementation, a zset structure containing a dictionary and a jump table

Using this dictionary, programs can find the score of a given member with O(1) complexity, and the ZSCORE command is based on this feature, which is used internally by many other ordered set commands. 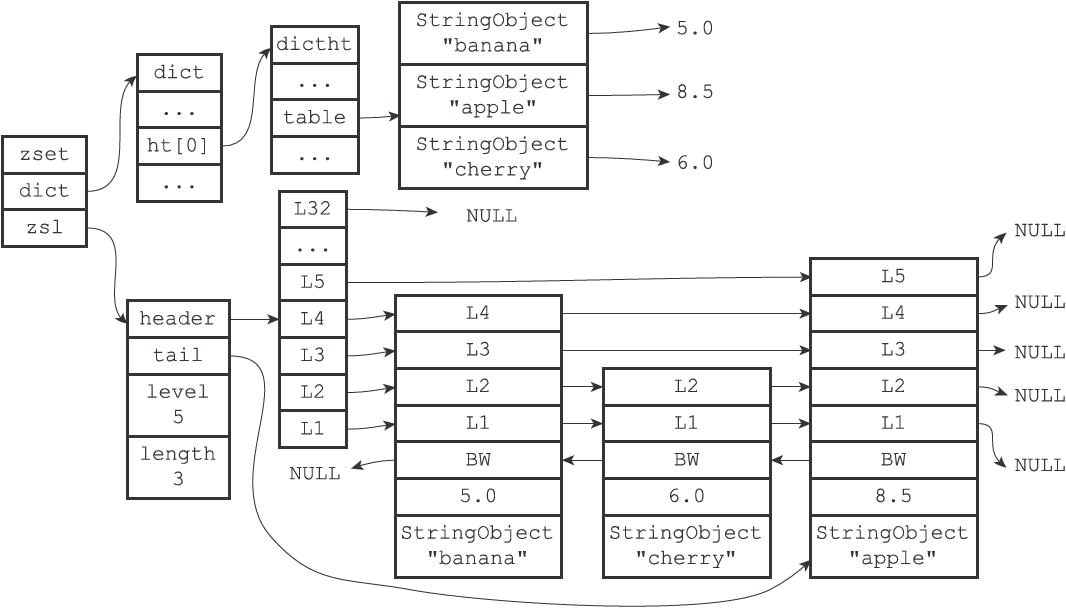 Why do ordered collections need to be implemented using both skip tables and dictionaries?

In theory, ordered collections can be implemented using either a dictionary or one of the data structures of a jump table alone, but using either a dictionary or a jump table alone can reduce performance compared to using both a dictionary and a jump table
For example, if only dictionaries are used to implement ordered collections, then O(1) is used instead.Complexity Find Members'Scoring is preserved, but because dictionaries store collection elements in an out-of-order manner, the program needs to sort all the elements saved by the dictionary each time it performs a range operation, such as ZRANK, ZRANGE, and so on. This sort requires at least O(NlogN) time complexity and additional O(N) memory space.(because you want to create an array to hold the sorted elements)

On the other hand, if only a skip table is used to implement an ordered set, all the advantages of a skip table performing a range operation are preserved, but because there is no dictionary, the complexity of finding scores based on members increases from O(1) to O(logN)

Commands for Ordered Collection Objects (to be perfected) 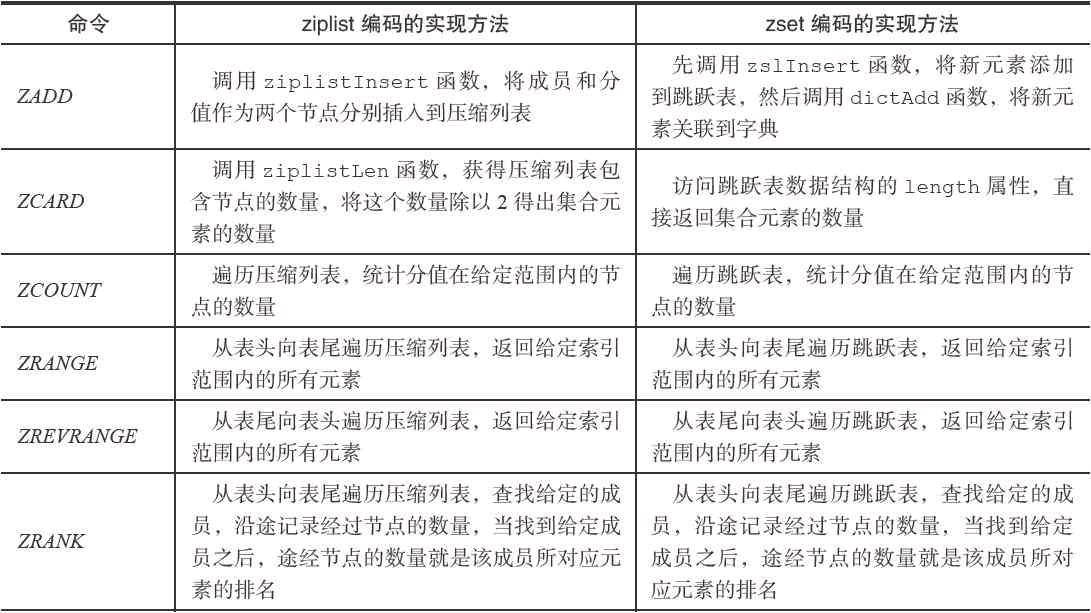 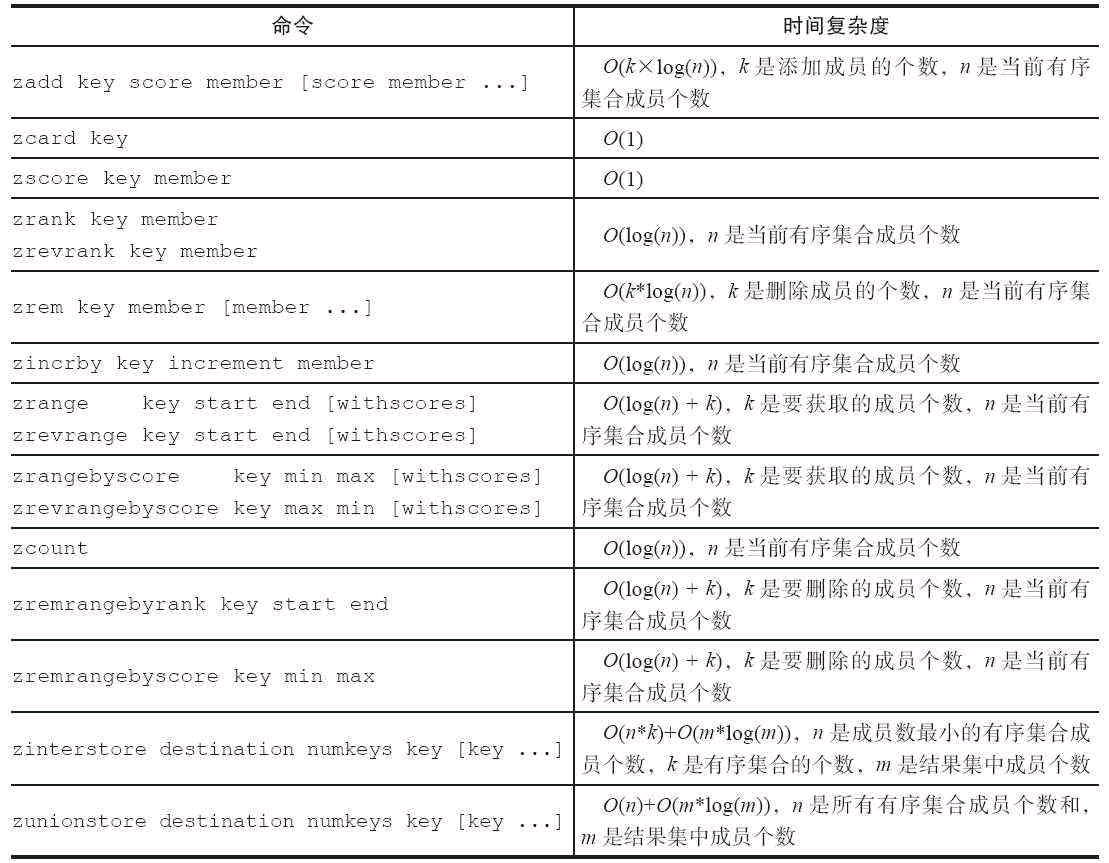 Add user tom and his score 251 to the ordered collection user:ranking

There are two things to note about the zadd command:

2. Calculate the number of members - zcard

For example, the following operation returns an ordered set user:ranking with a membership of 5, and as with scard commands of the set type, zcard has an O(1) time complexity

zrank returns rank from low to high, whereas zrevrank returns
For example, in the following operations, tom ranks 5th and 0th in zrank and zrevrank, respectively (ranking starts at 0).

The following action removes the member mike from the ordered collection user:ranking

Ordered sets are ranked by score, zrange returns from low to high, and zrevrange returns
The following code returns the lowest ranked three members, with the withscores option added, returning the member's score

9. Returns the number of members in the specified score range - zcount

10. Delete the ascending element in the specified rank - zremrangebyrank

The following action deletes the members from start to end

Suppose the following two ordered sets are imported into Redis
user:ranking:1 and user:ranking:2

This command has more parameters

The following intersects user:ranking:1 and user:ranking:2, weights and aggregate s use the default configuration, and you can see that the target key user:anking:1_inter_2 sum s the value

If you want the weight of user:ranking:2 to be 0.5 and the aggregation effect to use max, you can do the following

All the parameters of the command are identical to the zinterstore, but only a union calculation is done, such as calculating the union of user:ranking:1 and user:ranking:2, weights and aggregate using the default configuration, and you can see that the target key user:ranking:1_union_2 sum s the value

Ordered collections are typically used in a leaderboard system
Video websites, for example, need to rank videos uploaded by users. The dimensions of the rankings can be in many ways: by time, by number of playback, by number of favorites received.
The following uses the favorite dimension to record the rankings of daily video uploads by users. There are four main functions that need to be implemented
(1) Add user favorites
For example, user mike uploaded a video and got three reviews for using zadd and zincrby functions in an ordered collection

If you get another favor later, you can use zincrby