Under the condition of distributed high concurrency, we most need to ensure that only one thread can obtain a lock at the same time, which is the most basic point.

Under the condition of distributed high concurrency, for example, when a thread obtains a lock, it has not had time to release the lock. Because of system failure or other reasons, it cannot execute the command to release the lock, so that other threads cannot obtain the lock, resulting in deadlock.

Therefore, it is very necessary to set the effective time of the lock to ensure that after the system fails, it can actively release the lock within a certain time to avoid deadlock.

Therefore, two points need to be considered in the design of lock.

2. The scope of the lock should be as small as possible. For example, if you can solve the problem by locking 2 lines of code, don't lock 10 lines of code.

We know that ReentrantLock is a reentrant lock. Its feature is that the same thread can repeatedly get the lock of the same resource. Reentry lock is very conducive to the efficient utilization of resources. There will be a demonstration about this later.

For the above Redisson can be well satisfied, let's analyze it.

On the nety framework based on NIO, redison makes full use of a series of advantages provided by Redis key database. Based on the common interfaces in the Java Utility Kit, redison provides users with a series of common tool classes with distributed characteristics, and supports various deployment architectures such as Redis single instance, Redis sentry, Redis Cluster, Redis master slave and so on. Redisson uses Lua script to encapsulate multiple non atomic commands and send them to the server to ensure the atomicity of the operation

Redisson is a relatively perfect implementation of redis distributed lock at present. More details can be learned through redisson

Analysis of Redisson plus unlocking process

Take a look at the internal lock operation process of Redisson through a figure. Its internal implementation mainly uses three technology stacks (Lua script + Semaphore + asynchronous thread). Note: the Redisson version used by the author is 3.12.1 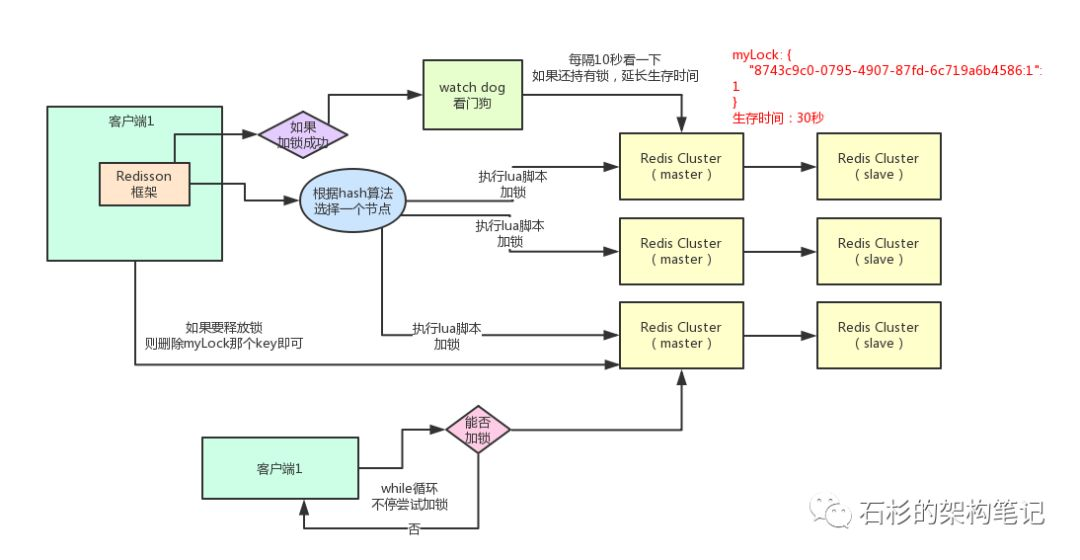 The thread acquires the lock successfully: execute the lua script and save the data to the redis database.

ARGV[1] indicates the expiration time of the lock. If it is not set, it defaults to 30 seconds

Branch 1: lock does not exist

Use the "exists lockName" command to determine whether the lock exists. If it does not exist, use the "hset KEYS[1] ARGV[2] 1" command to lock. Assuming that the lock of client 1 is successful, use the hash data structure to store the lock resources of client 1. The structure is:

Then use "pexpire KEYS[1] ARGV[1]", i.e. "pexpire lockName 30000" to set the expiration time of lockName lock, and then return null to indicate that locking is successful!

Branch 2: the lock exists and locks the same client repeatedly

The client can obtain the lock repeatedly in the same thread operation. Use the command "hincrby KEYS[1] ARGV[2] 1" to increase the reentry times of the same client by 1, and reset the expiration time. Returning null indicates that the lock is successful!

Client 1 repeatedly locks successfully. At this time, the hash structure is as follows:

After the client fails to obtain the lock, the current client will subscribe to the channel with the name "reisson_lock_channel: {lockname}" to listen to the callback processing. When the client releases the lock, it will be in reisson_ lock__ Channel: publish unlock on channel of {lockname}_ Unlock message for message

The client thread will use the "pttl KEYS[1]" command to return the remaining expiration time ttl of the current lock, and then use Semaphore in the J.U.C framework to call locksupport according to the returned ttl time Parknanos (ttl) to block itself. After the specified waiting time, continue to try to lock and cycle until it succeeds

The code snippet of lock() method in RedissonLock class is as follows:

The code snippet of tryACquire in Semaphore class is as follows:

Scene example: A is going to the toilet, B finds that a is already in the toilet, so B asks when a can come out. A says it's OK to wait 10 minutes. At this time, B uses his watch to start semaphore. After 10 minutes, he finds that a is still inside, so B continues to ask a how long it will take. A is embarrassed to wait for me for another 5 minutes, and B starts timing and waiting again...

The reason why Redisson can implement the reentrant locking mechanism is related to two points:

The following is the data stored in redis

Here, the surface data type is Hash type, which is equivalent to our java < key, < key1, value > > type. Here, key refers to 'reisson'

guid + ID of the current thread. The latter value is related to reentrant locking.

The above figure means the mechanism of reentrant lock. Its biggest advantage is that the same thread does not need to wait for the lock, but can directly operate accordingly.

There is a leaseTime option in the lock acquisition api provided by Redisson. When the value is - 1, it indicates that the successful client can always hold the lock. Other client threads will wait until the lock is released. We know that when setting a key in Redis, we often need to specify expireTime to prevent it from occupying memory space for a long time. In this scenario, the lock will eventually expire, so before the key expires, a mechanism (WatchDog) must be provided to ensure that the key remains valid

After the client locks successfully, a watch dog background thread will be enabled. The netty time wheel HashedWheelTimer algorithm will be used to check every 10 seconds. If the client still holds the lock, the expiration time of the lock will be reset to lockWatchdogTimeout=30 seconds (default), in which delay = lockWatchdogTimeout/3

How does Redisson ensure that the delay operation of WatchDog is executed only once when the same client is locked repeatedly and successfully? The answer is: local cache

The code snippet of renewExpiration() method in RedissonLock class is as follows:

Call the renewExpirationAsync() method to set the expiration time of the lock. The Lua script is as follows:

Which locking methods use WatchDog?

Note: if leaseTime is - 1, the watchDao function will not be enabled

The operation of releasing the lock is relatively simple and easy to understand. There are about four steps: Delete key - > set expiration time - > delete local cache - > publish unlocking message

Redis distributed lock has a defect, that is, in redis sentinel mode:

Client 1 writes a reisson lock to a master node, which will be asynchronously copied to the corresponding slave node. However, in this process, once the master node goes down, the active and standby switches, and the slave node changes from master node to slave node.

At this time, when client 2 tries to lock, it can also lock on the new master node. At this time, multiple clients will complete locking the same distributed lock.

At this time, the system will have problems in business semantics, resulting in the generation of all kinds of dirty data.

The defect is in sentinel mode or master-slave mode. If the master instance goes down, multiple clients may complete locking at the same time.

So far, the detailed process analysis of Redisson plus unlocking is completed! Back to the beginning, we said that Redisson still has some minor defects. For example, under the mast slave architecture, the master-slave synchronization is usually asynchronous

There is obvious competition in this scenario (master-slave structure): 1. Client A obtains the lock from the master 2. Before the master synchronizes the lock to the slave, the Master goes down 3. slave node is promoted to master node 4. Client B has obtained the same resource and client A has obtained another one. The lock security is invalid!

How does redisson's WatchDog take care of the house https://blog.csdn.net/ice24for/article/details/86177152

Redisson solves the problem that the redis distributed lock expires and the business is not completed: https://blog.csdn.net/belongtocode/article/details/102511520