In spark, many places involve network communication, such as message exchange between various components of spark, upload of user files and Jar packets, Shuffle process data transmission between nodes, copy and backup of Block data, etc. Spark1. Before 6, Spark Rpc was implemented based on Akka, which is an asynchronous message framework based on Scala, but Akka is not suitable for large file transmission; So, spark1 Before 6, Rpc was implemented through Akka, and large files were HttpFileServer based on Jetty. However, spark1 6 remove Akka( https://issues.apache.org/jira/plugins/servlet/mobile#issue/SPARK-5293 ), the reasons can be summarized as follows:

Note: the source code version involved below is spark2 1.0, the following pictures are taken from the online boss blog. 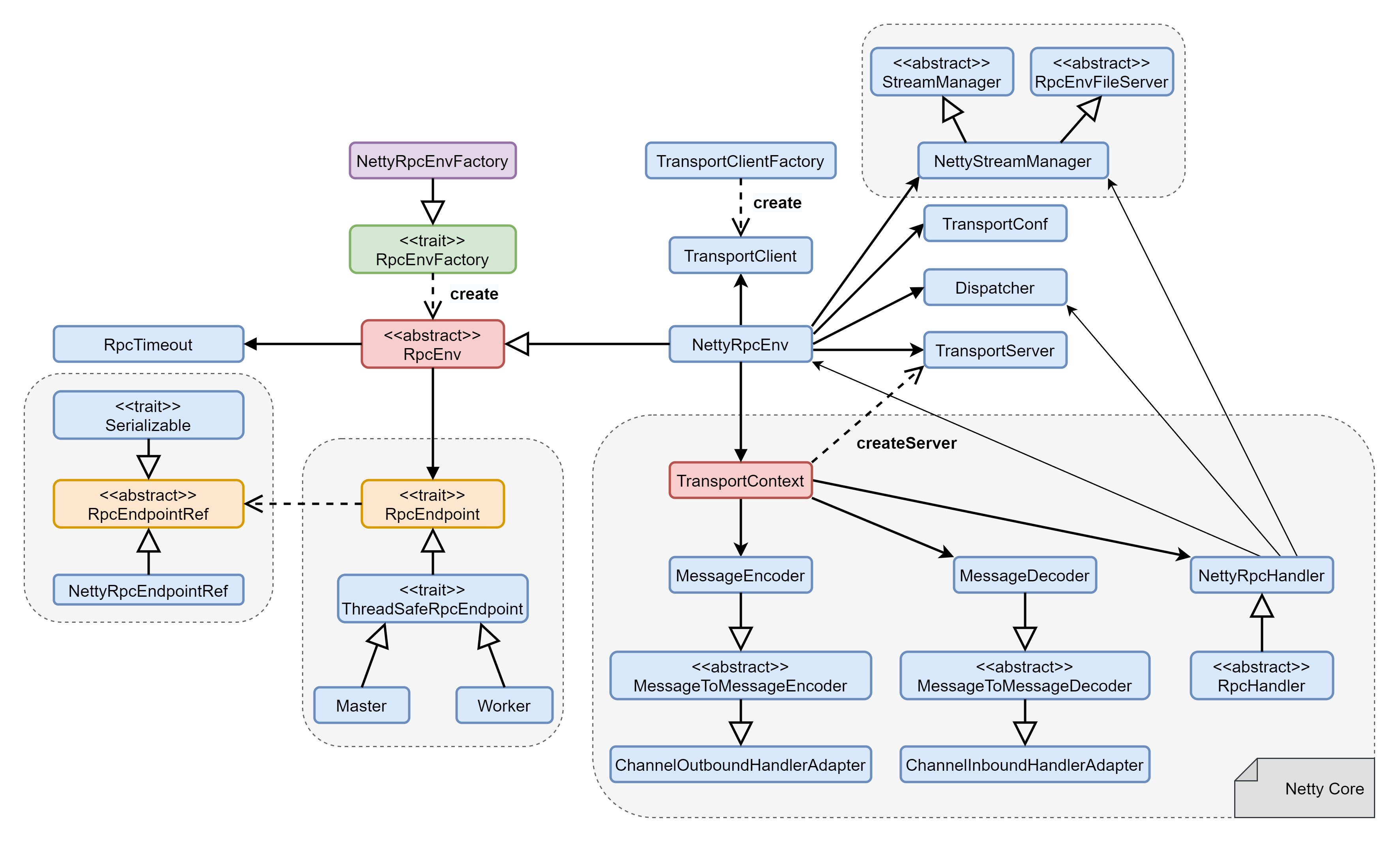 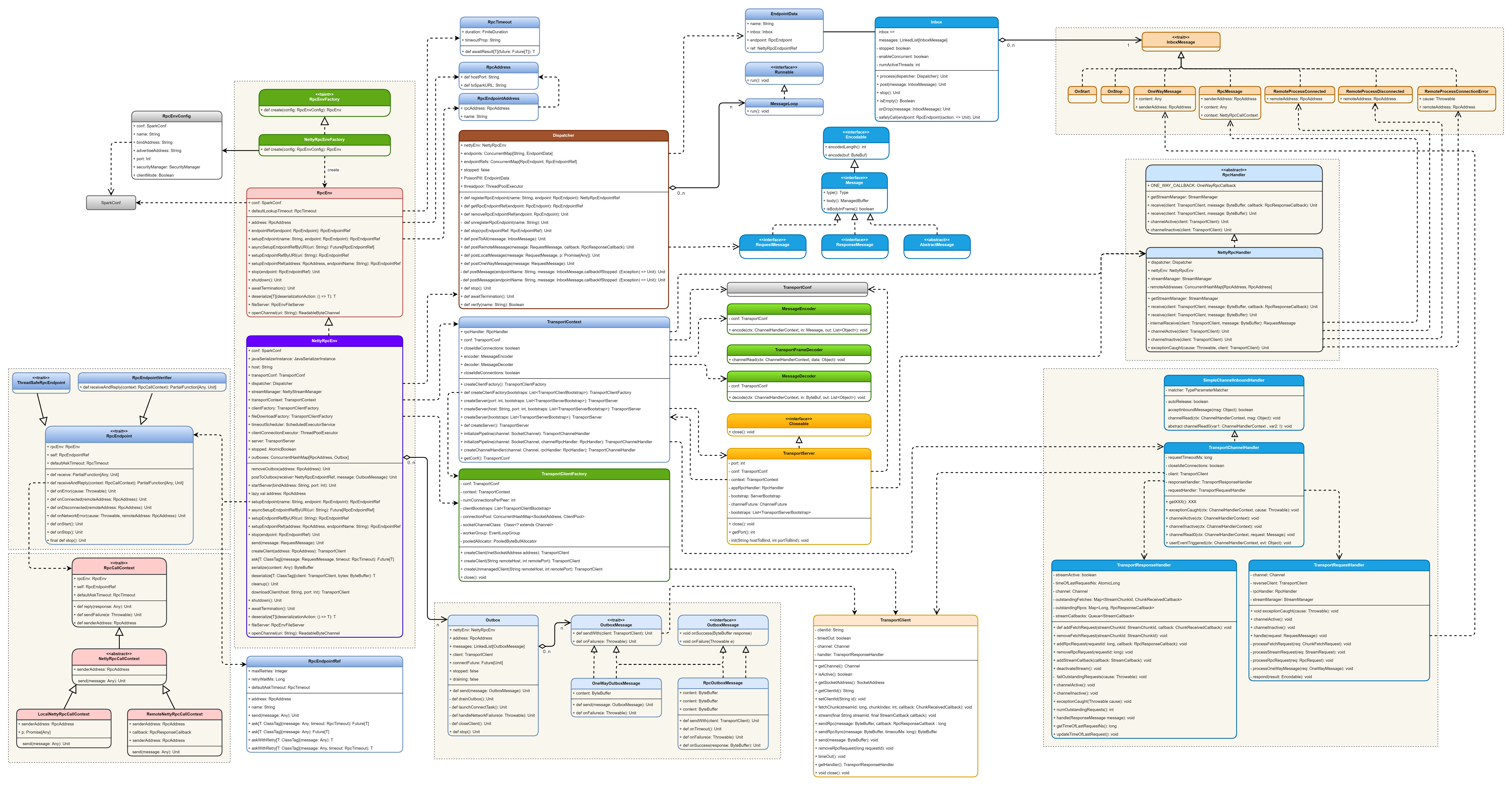 There are four specific implementations of RequestMessage:

Since OneWayMessage does not require a response, ResponseMessage has two implementations for success or failure status, namely:

Spark's Rpc framework is based on Actor model. Each component can be considered as an independent entity, and each entity communicates through messages. The relationship between specific components is as follows:

SparkEnv saves the environment information of Application runtime, including RpcEnv, Serializer, Block Manager and ShuffleManager, and provides different creation methods for Driver and Executor respectively. Among them, RpcEnv maintains the communication between Spark nodes and is responsible for forwarding the delivered messages to RpcEndpoint.

You can see that the CoarseGrainedExecutorBackend entry class is responsible for starting the Executor. Take the RpcEnv initialization description of sparkExecutor as an example to see the code logic of createExecutorEnv():

RpcEnv is not only basically consistent with Akka from the external interface, but also basically similar in the internal implementation, which is implemented according to the design idea of MailBox;
RpcEnv Server model:

As shown in the figure above, RpcEnv acts as a Server and also provides an internal implementation Client. When serving as a Server, RpcEnv initializes a Server and registers NettyRpcHandler. In general, simple services can directly process requests in RpcHandler. However, considering that many rpcendpoints are mounted on an RpcEnv Server, the RPC request frequency of each RpcEndpoint is uncontrollable, so it is necessary to maintain these requests with a certain distribution mechanism and queue, Dispatcher is the distributor and InBox is the request queue;
In the process of registering the RpcEndpoint with the RpcEnv, the RpcEnv is also indirectly registered with the Dispatcher distributor. The Dispatcher maintains an InBox for each RpcEndpoint and maintains a thread pool in the Dispatcher (the thread pool size is the number of cores available to the system by default. Of course, it can also be configured through spark.rpc.netty.dispatcher.numThreads), The thread processes the requests in each InBox. Of course, the actual processing process is completed by RpcEndpoint.
Secondly, RpcEnv also completes the function implementation of the Client. RpcEndpoint ref is based on RpcEndpoint, that is, if a process needs to communicate with N RpcEndpoint services on the remote machine, it corresponds to N RpcEndpoint refs (the actual network connection at the back end is public, which is realized by the connection pool provided in the TransportClient), When calling an ask/send interface of rpcandpointref, the message content + rpcandpointref + local address will be packaged into a RequestMessage and sent by RpcEnv. Note that it is important to include rpcandpointref in the packaged message, so that the Server can identify which rpcandpointref this message corresponds to.
Like the sender, in RpcEnv, a queue is maintained for the host:port of each remote end, that is, OutBox. The sending of RpcEnv only puts messages into the corresponding queue. However, unlike the sender, a so-called thread pool is not maintained in the OutBox to clean up the OutBox at fixed time, but is realized through a pile of synchronized
Let's take a look at the class diagram related to RpcEnv: