Docker and other container technologies significantly simplify the dependency management and portability of software. In this series of articles, we explore Docker Use in machine learning (ML) scenarios.

This series assumes that you are familiar with ML and containerization, especially Docker. Welcome to download Project code.

stay Last article In, we use a conventional Intel/AMD CPU to create a basic container for experiment, training and reasoning. In this section, we will create a container to handle the data with Raspberry Pi Reasoning on ARM processor.

With the official support for Raspberry Pi, the installation of Docker is very simple.

You can go to the official website Docker website Find detailed installation instructions for any supported operating systems.

The easiest way to perform an installation is to use Convenience script . However, it is not recommended for production environments. Fortunately, "manual" installation is not too complicated.

For the 64 bit Ubuntu server operating system, it looks like this:

For different operating system versions, the bold ubuntu and arm64 need to be updated accordingly.

Although the basic Python images we used in previous articles can be used for ARM processors, they may not be the best choice. For ARM architecture, similar to Alpine OS, many Python libraries cannot be precompiled and packaged as wheels. They need to be compiled during installation, which can take a long time.

Alternatively, we can rely on Python included in the operating system. This is not something we often do, but there is no harm in using Docker. We only need one Python environment per container. The python version we use will lose some flexibility, but the ability to choose from many compiled system level Python libraries will save us a lot of time and reduce the size of the generated image.

This is why we will use Debian: Buster slim image as our foundation. It comes with Python 3.7 and should be enough for all our purposes because it meets the requirements of all libraries and AI/ML code we will run with it.

After several attempts and adding missing system libraries in the process, we finally got the following Dockerfile to deal with our reasoning:

Note that in this section, we install the python 3-opencv system library and use apt get instead of pip. However, we cannot install NumPy in the same way because the operating system version does not match TensorFlow requirements. Unfortunately, this means that we need to compile NumPy and some other TensorFlow dependencies.

Nevertheless, the main package does not need to be compiled because we use the Raspberry Pi wheel published on GitHub. If you prefer to use 32-bit Raspberry PI OS, you need to update the TensorFlow link in Dockerfile accordingly.

after Download project code (with the training model and sample data), we can build our image:

This operation may take more than 30 minutes to complete (at least on Raspberry Pi 4/400). It's not lightning fast anyway, but if many libraries need to be compiled, it may take several times as long. 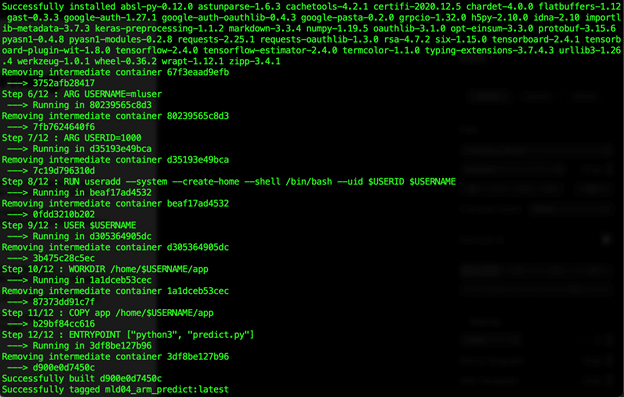 Finally, we can run our prediction on the "edge":

Similar to the previous article, we only map data folders because applications and models are stored in containers.

The expected results are as follows:

We have successfully built and run TensorFlow prediction on Raspberry Pi. By relying on the precompiled system Python library, we sacrifice some flexibility. However, the reduction in image build time and final size is well worth it.

In the last article in this series, we will return to Intel / AMD CPUs. This time, we will use GPU to speed up our calculations.