This part is my memory, which can be omitted

In my understanding of $SAM $, first pick a picture

First, it is found that a straight line of $s - > 9 $in the figure below is $aabbabd $and $is the original string

From here, we can see the $endpos $relationship, which is different from $AC $automata

Because this $SAM $is to represent all substrings or suffixes, if $endpos $is the same, that is, it will continue to extend backward at this point after the end of this state

Let's have a rough understanding first. Can we understand that if we want to insert a suffix, we need to save space. Then if a point ending in it passes through multiple substrings, we can use this point multiple times

Take $4 $in the figure below as an example. If there are three suffixes that meet the conditions (explained below), this node can be used three times in the three suffixes

It doesn't matter if you have your own family. After all, the $endpos $set has repeated parts. Obviously, this $endpos $set is orderly and incremental. When a string is another string suffix, the shorter the string, the larger the $endpos $and the larger the set must contain a small set. Then this thing can be determined through a pointing relationship 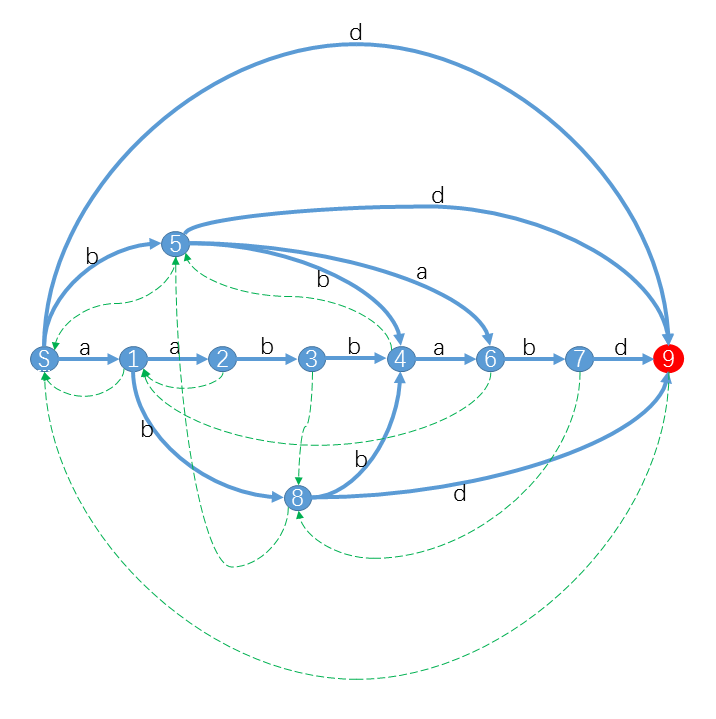 Find all suffixes and insert $\ xcancel{\huge NO} one by one$

Think about complexity in the incremental process

First, clarify what we maintain in the automata and what we change when modifying

$SAM can find a few things quickly. It's certainly not used here

We need to add a character after building the previous automata, that is, there are $k-1 $more characters to represent, that is, all substrings containing the last character

First, one more node on the suffix automata means $endpos=k $. Obviously, all new strings from large to small. First, the largest $endpoz=k $, then the $endpos $of the small string may not only be $k $, but may also appear in the front. The embodiment on the automata is $tran [now] [s [k]]= 0 $, that is to say, the suffix has been expressed. At this time, look at the parts that need to be changed. First, the $endpos $of the expressed suffix has changed, and there is one more position. If there is no change in this state, you need to separate this state. It is proved above that the longer the string $endpos $is, the smaller it will be divided into two parts, the changed and the unchanged. Note $$ At this time, insert a string, either add a node or keep it unchanged, and no more nodes will be added. Then what we need to solve is the complexity of jumping and finding (to be honest, I haven't seen this carefully...)

As proved above, the number of States is $O(2\times n)$

Put a copy of the code

Take a look at the $add $function

The rest are $O(1), $except for a few cycles. Look at these cycles

In fact, what you change is a continuous part. You will change a continuous section every time. There will never be a section that has been passed many times. Then each point will be passed at most once

This seems so troublesome

First of all, this thing is to change the transfer edge. Isn't it divided into two parts now, one is the unchanged part and the other is the changed part

What we change is all the edges connected with the old state. Then we consider all the next operations. The essence is to split this point. Then we consider the following splitting operations because the $endpos $of this point changes. It also proves that the shorter the string is, the easier it is to change. Then it is definitely not this point that is considered to change, but another point obtained by this splitting operation. Let's understand it sensibly, If you only split one point at a time, you can't put aside the easy to become and split the hard to become. That is, each node can be traversed at most once, and the edges of each node can be traversed at most once. Then the complexity is related to the number of edges

Or consider building a spanning tree. The current $SAM $is not complete

The function of $trans $is to traverse all substrings and run back from the termination node to all substrings that end with it (running backwards). If you find that it cannot be expressed, you can add edges. If you consider adding edges, it is because $endpos $is different (if it is the same, you can run down), then you can add up to $endpos $set size edges

Facing a proof card for a long time ~, like zz,hhh