Familiar with the working principle of SD card and SDIO. Master the reading and writing of SD card.

Most single chip microcomputer systems need large capacity storage devices to store data. At present, U disk, FLASH chip, SD card and so on are commonly used. They have their own advantages. Through comprehensive comparison, the most suitable single-chip microcomputer system is the SD card. It not only has a large capacity (more than 32GB) and supports SPI/SDIO driver, but also has a variety of volume sizes to choose from (standard SD card size, TF card size, etc.), which can meet the requirements of different applications. Only a few IO ports are needed to expand an external memory of more than 32GB. The capacity ranges from tens of M to tens of G. the selection scale is very large, the replacement is also very convenient and the programming is also simple. It is the first choice for large-capacity external memory of single chip microcomputer.

There are generally two communication interfaces for the controller to read and write the SD card, one is SPI interface and the other is SDIO interface. 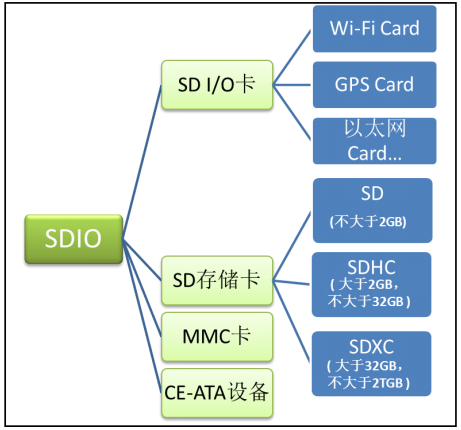 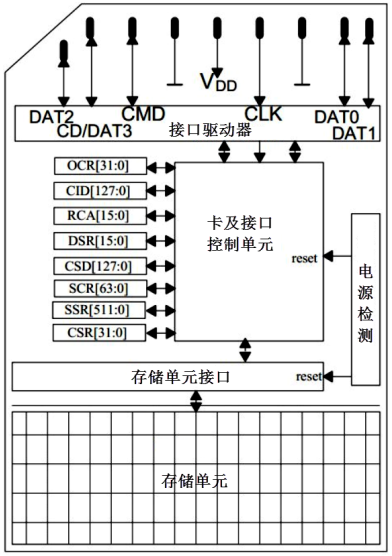 The SD card has a total of 8 registers, which are used to set or represent the SD card information. These registers can only be accessed through corresponding commands. The control operation of the SD card is not to read and write one register at a time like the operation controller GPIO related registers. It is controlled by commands. SDIO defines 64 commands, each of which has a special meaning and can realize a specific function. After the SD card receives the command, Modify the internal register of SD card according to the command requirements. In program control, you only need to send combined commands to realize the control and read-write operation of SD card.

The topology of SD card bus is shown in the figure. Although the bus can be shared, it is not recommended to share the bus signal with multiple card slots. It is required that a separate SD bus should be connected to a separate SD card. 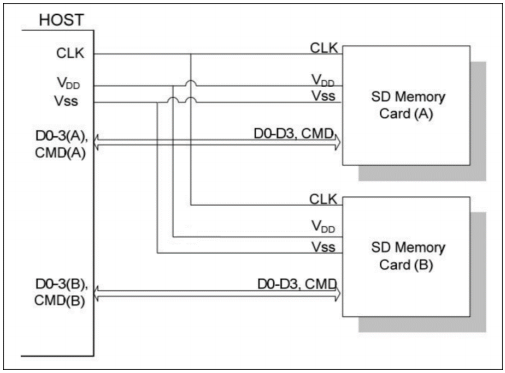 CMD: command control line through which the SDIO host sends commands to control the SD card. If the command requires the SD card to provide a response (response), the SD card also transmits the response information through the line;

Whether SDIO is transmitted from the host controller to the SD card or from the SD card to the host controller, it is only valid on the rising edge of the CLK clock line. During the operation of SD card, two clocks with different frequencies will be used to synchronize data. One is the clock frequency FOD in the identification card stage, with a maximum of 400kHz. The other is the clock frequency FPP in the data transmission mode, with a maximum of 25MHz by default. If SDIO works in the high-speed mode through the configuration of relevant registers, the maximum frequency of the data transmission mode is 50MHz.

SD data is transmitted in block (Black). The length of SDHC card data block is generally 512 bytes. Data can be from host to card or from card to host. The data block needs CRC bit to ensure successful data transmission. CRC bit is generated by SD card system hardware. STM32 controller can control the use of single wire or 4-wire transmission. This development board is designed to use 4-wire transmission.

The SD command format is fixed at 48bit and is continuously transmitted through CMD line (data line does not participate).

The SD command consists of the following:

Command number: it occupies 6 bits, so there are 64 commands in total (Code: CMD0~CMD63). Each command has a specific purpose. Some commands are not applicable to SD card operation, but only for MMC card or SD I/O card.

There are four types of SD commands:

Unresponsive broadcast command (bc), which is sent to all cards and does not return task response;

With response broadcast command (bcr), send to all cards and receive responses from all cards at the same time;

The addressing command (ac) is sent to the selected card, and the DAT line has no data transmission;

The commands of SD card system are divided into several classes, and each class supports a "card function setting". 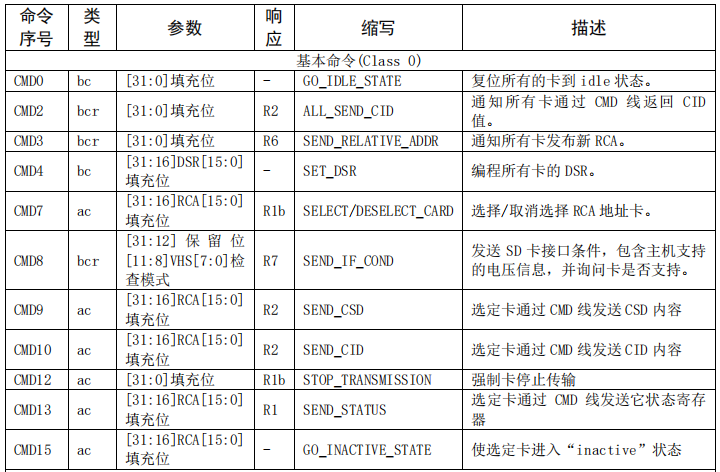 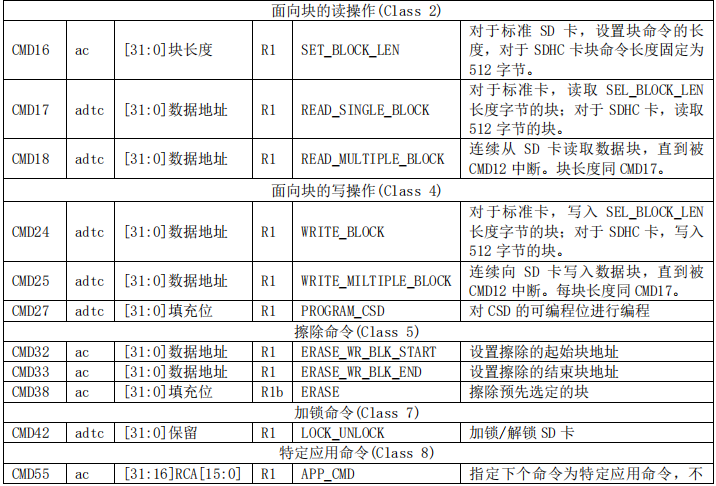 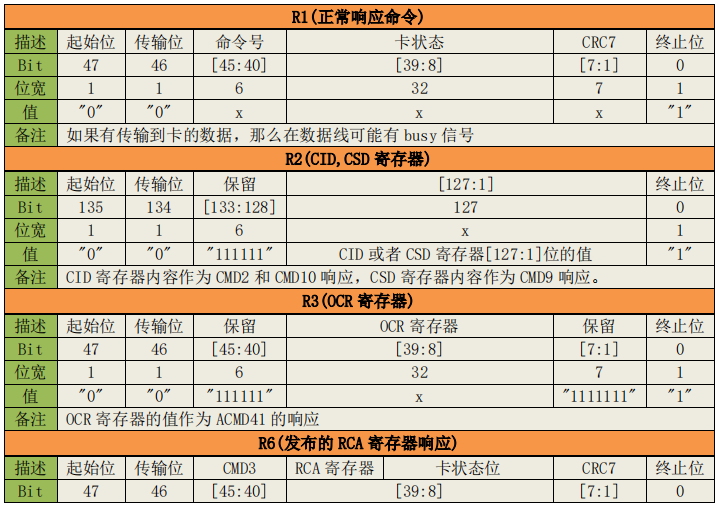 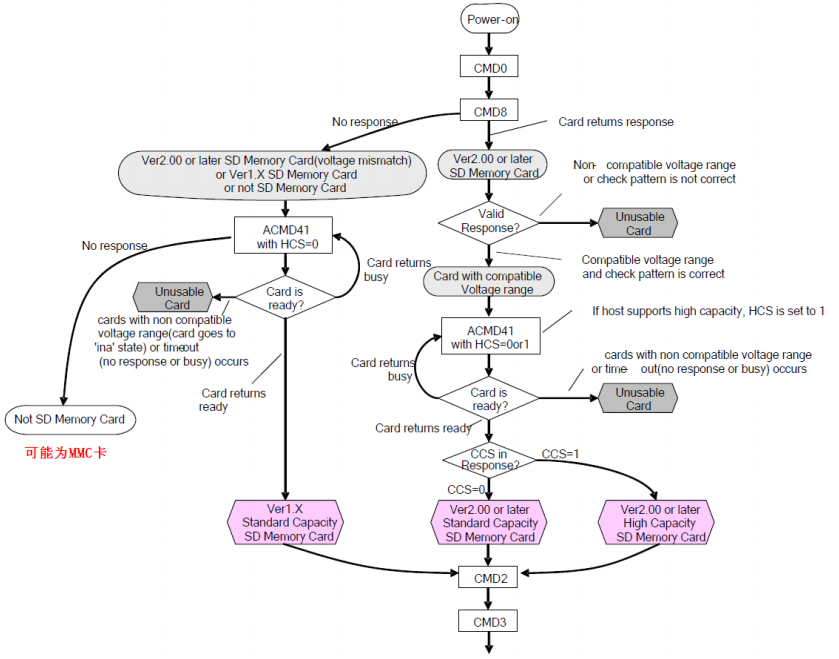 From the figure, we can see that no matter what kind of card (here we divide the card into four categories: SD2.0 high capacity card (SDHC, maximum 32G), SD2 0 standard capacity card (SDSC, 2G maximum), sd1 X card and MMC card). First, we need to power on the card (SDIO_POWER[1:0]=11 needs to be set). After power on, send CMD0, soft reset the card, and then send CMD8 command to distinguish SD card 2.0. Only cards 2.0 and later can support CMD8 command, MMC card and v1.0 X card does not support this command. The format of CMD8 is shown in table.

When sending CMD8, we can set the VHS bit through its parameters to tell the SD card and the power supply of the host. The definition of VHS bit is shown in the table below:

After sending CMD8, send ACMD41 (note that CMD55 should be sent before sending ACMD41) to further confirm the operating voltage range of the card, and tell the SD card whether the host supports high-capacity card (SDHC) through HCS bit. The command format of ACMD41 is shown in the table below: 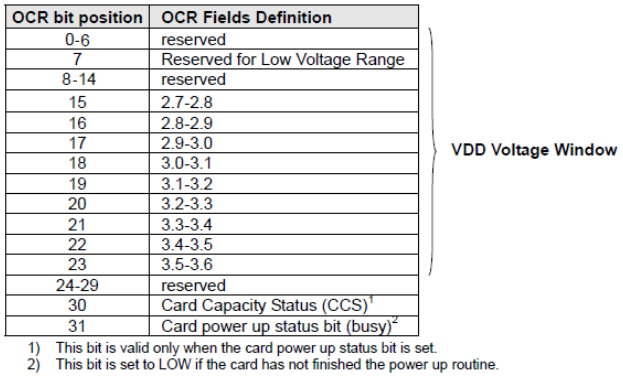 For MMC card, ACMD41 is not supported and CMD55 is not responded to. For MMC card, we only need to check the OCR register of MMC card after sending CMD0 and CMD1 (the same function as ACMD41) to realize the initialization of MMC card.

So far, we have realized the type differentiation of SD card. In the flow chart, we finally sent CMD2 and CMD3 commands to obtain card CID register data and card relative address (RCA). 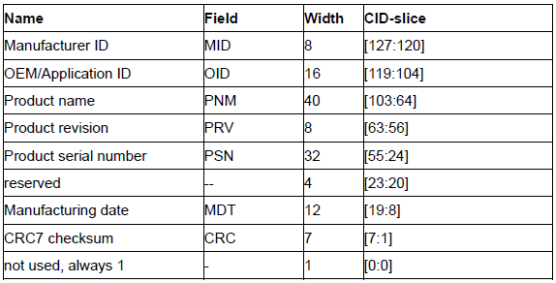 After receiving CMD2, the SD card will return R2 long response (136 bits), including 128 bits of valid data (CID register content), which is stored in SDIO_RESP1~4 and other four registers. By reading these four registers, the CID information of SD card can be obtained.

CMD3 is used to set the relative address of the card (RCA, which must be non-0). For SD card (non MMC card), after receiving CMD3, a new RCA will be returned to the host to facilitate host addressing. The existence of RCA allows one SDIO interface to hang multiple SD cards. RCA can distinguish which card the host wants to operate. For MMC card, instead of the SD card automatically returning RCA, the host actively sets the RCA of MMC card, that is, the RCA setting is realized through CMD3 with parameters (the high 16 bits are used for RCA setting). Similarly, the MMC card also supports one SDIO interface to hang multiple MMC cards. Unlike the SD card, all RCAs are actively set by the host, while the RCA of the SD card is sent to the host by the SD card.

After obtaining the card RCA, we can send CMD9 (with RCA parameters) to obtain the contents of the SD card CSD register. From the CSD register, we can obtain very important information such as the capacity and sector size of the SD card.

So far, our SD card initialization is basically over. Finally, select the SD card we want to operate through the CMD7 command to start the read-write operation of the SD card.

Open the serial assistant and download the compiled program to the development board. Print the SD card information first. 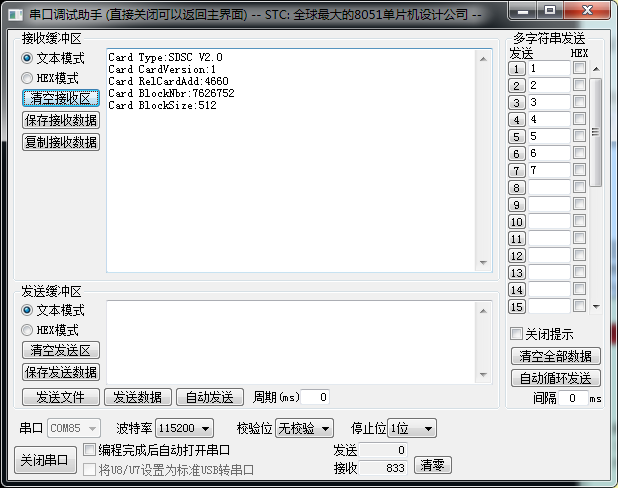 Press KEY0 to write data. Press key1 to read data from the address. 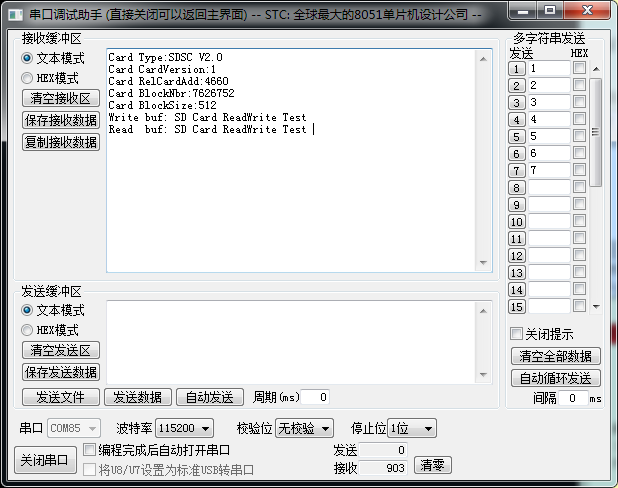