The following tests are for SpringBoot 2.3.7, no abnormal print results

The following is a printout of springBoot 1.5.9

The @AfterReturning method was called...
@Around after notification...

The @AfterThrowing method was called...

To summarize, the After method of Spring4 is always executed before AfterThrowing and AfterReturning, and Spring5 is executed after that. It is understood that After method is executed last and must be executed. It should be placed in final.

What is circular dependency?

Multiple beans depend on each other to form a closed loop.a depends on b,b depends on c,c depends on a. Usually, if you ask how to solve the circular dependency problem in the spring container, you must refer to the scenario where attributes refer to each other in the default single bean.Rather than injecting through a constructor. Constructor cyclic dependencies are not solvable (this is understandable, similar to deadlock problems)

If there are multiple object types for prototype

BeanCurrentlyInCreationException circular dependency error is also reported, so it is not applicable for prototype scenarios

How does spring solve circular dependency?

The five traditional data types and floor applications of redis (redis commands are case-insensitive, but key values are):

string:(Commodity number is generated by incr command, dots and steps)

Scenario for using distributed locks: multiple services + at one time + one request from the same user

The initial case of purchasing goods is an example where there is no error in a single machine version, but not in a multithreaded case with high concurrency

Improvement 1: Using synchronized or reentrantLock: In distributed scenarios, each lock can only lock a local block of service code, so each service can enter a single request, as many micro-services can enter as many requests 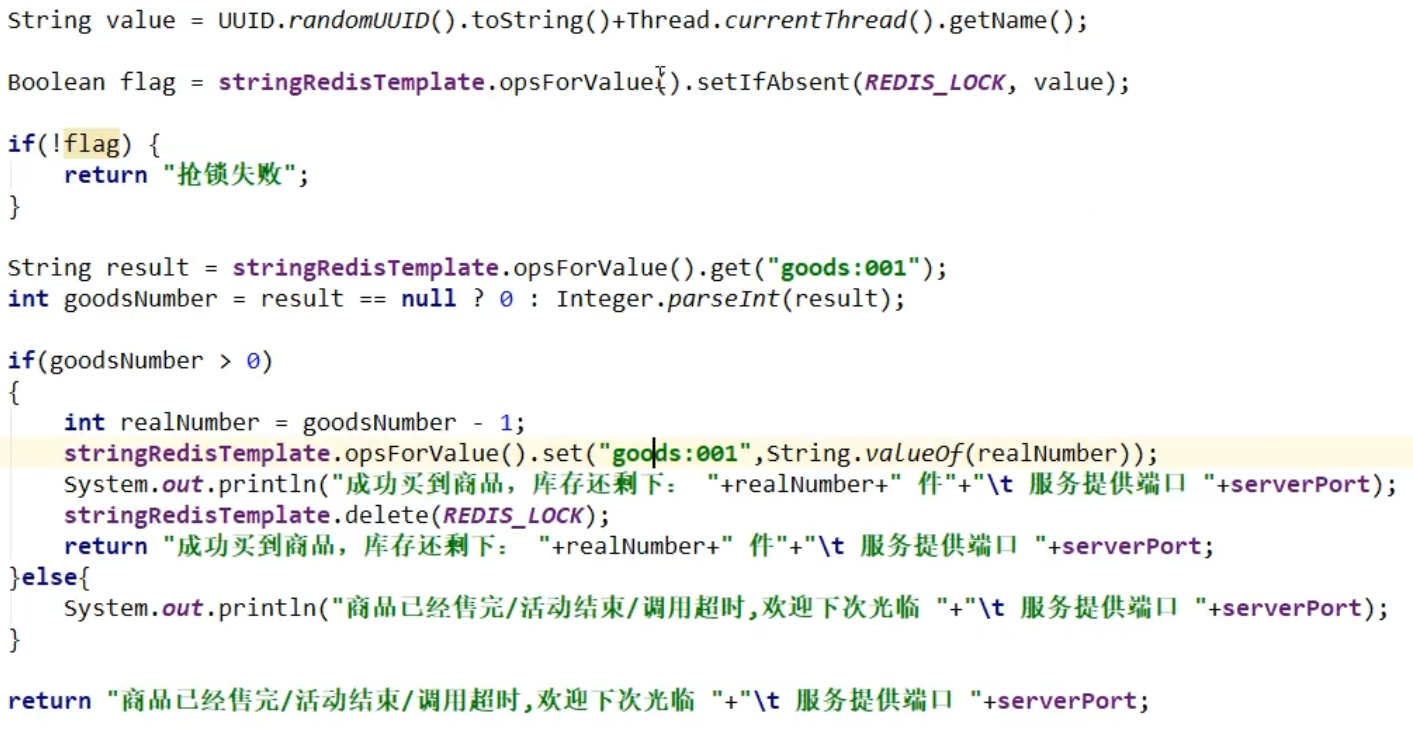 Improvement 3: The unlocking process must be wrapped in a finally block of code

Improvement 4, what to do if the program is down, need to add expiration time

Improvement 5, this is not an atomic operation. What if you just shut down when you set it up? Atomic operation into one line statement

Improvement 6. What if the business is long, Carton, and the set expiration time is exceeded? Locks are automatically deleted, causing other threads to rush in and get locks. When Carton's threads recover, they will delete other people's locks - each lock is set differently. When unlocking, it is decided that it is their own lock to delete.

Improvement 7, the operation to delete a lock now and to judge your own lock is not an atomic operation. It is possible that the lock will expire just after you have judged it, and someone else's lock will be deleted by mistake--change to a LUA script to solve/if you can't use the LUA script to do so (use redis own transaction, and the queue will be empty if the transaction fails) 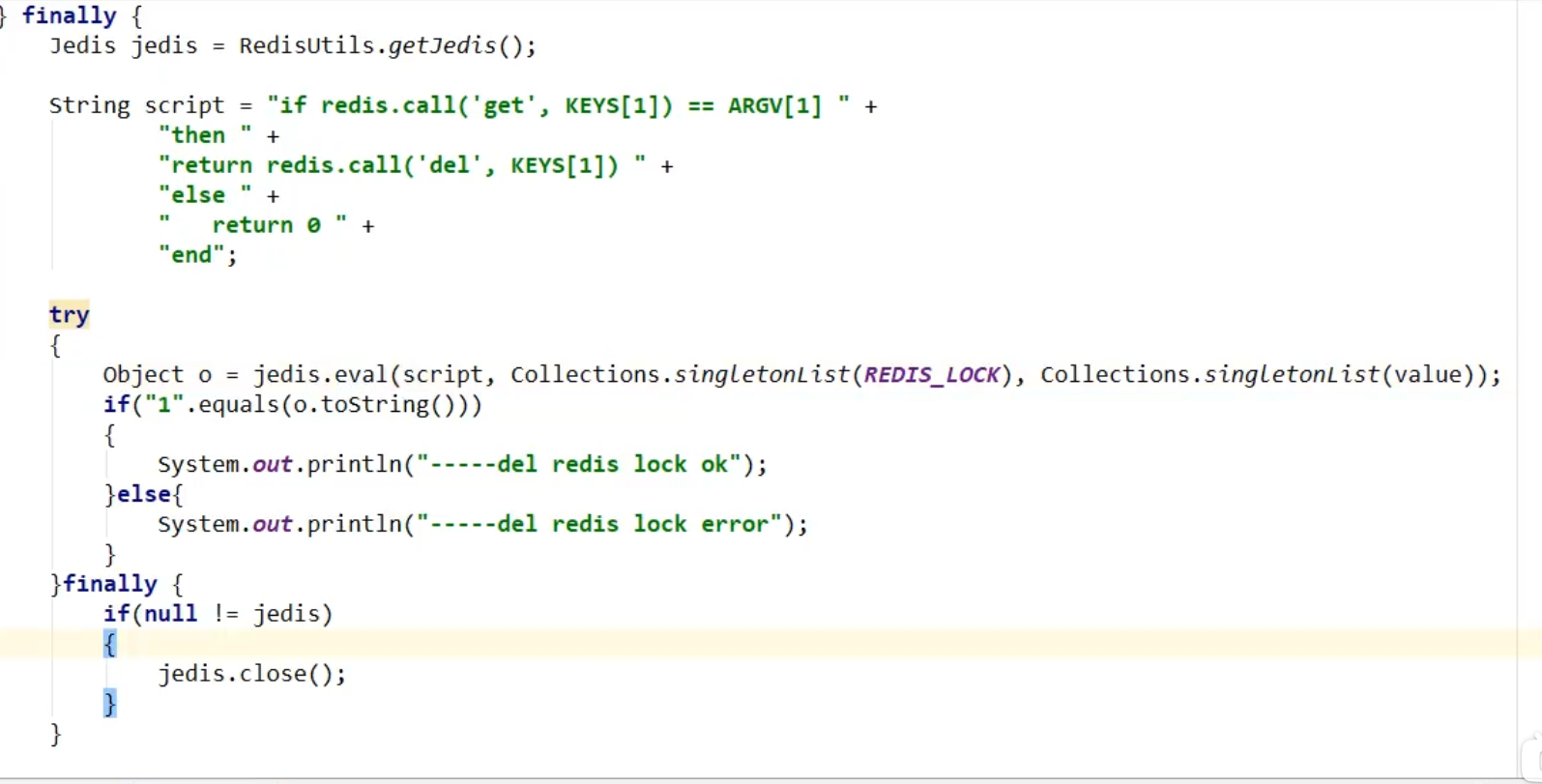 Amendment 8: If the business is lengthy, locks will still be deleted first and other threads will flow in. Redis distributed locks implement cache renewals - watchdog. However, in case of cluster problems, we can't actually write code to solve the problem of data loss during cluster master-slave replication (Redis guarantees high available AP relative to zookeeper's CP guaranteed reliability).--Redisson distributed locks are the only way to ensure these two points

Amendment 9: An error attempt to unlock lock,notlocked by current thread by node id will be reported in the case of excessive concurrency. Add the following actions when unlocking

Modify line 859 of the redis configuration file to set the maxmemory parameter in byte bytes. It is generally recommended that redis memory be set to three-quarters of the maximum physical memory. You can also modify the config set maxmemory value by command

Both of these options go to extremes, which requires a memory phase-out strategy

The default is noevication: no key s will be deleted waiting for memory to explode

What is the LRU algorithm?Choose the most recently unused data to phase out