But to make the Dragon City Flying generals, only because they are in this mountain

Before Introduction to BIO and NIO (Netty leader) In this article, we talked about socket. This article wants to broaden our horizons and talk about socket from the perspective of computer network

Review the old and know the new, and talk about the network model

The above figure shows the OSI (open system interconnection reference model) seven layer network reference model of ISO (International Standardization Organization). This model is a standard and a reference, and now the most widely used implementation is the four layer model of TCP/IP.

Tips: here, there are four layers of TCP/IP model and five layers on the Internet. The difference is that the four layers combine the data link layer and the physical layer into one network interface layer. Neither of these two statements is wrong.

Talk about something real

I feel that what the picture says is still a little empty. I understand it, but I don't seem to fully understand it. Let's talk about the real TCP/IP network model we are really using. Take five layers as an example, which is clearer. 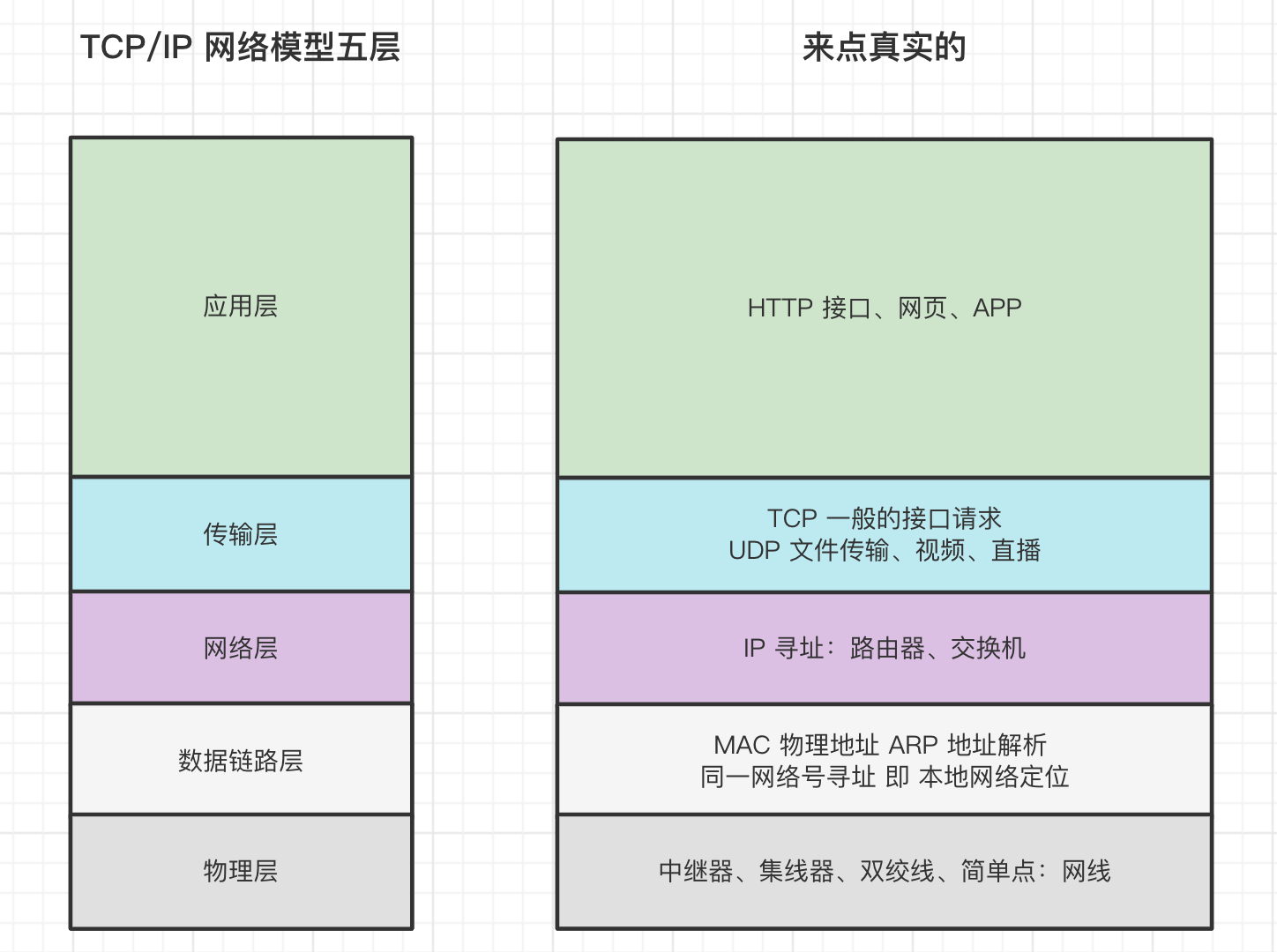 Generally speaking, most of our daily programming plays are in the application layer and transport layer. OK, Socket programming is mentioned here. Where is the Socket? For what? Keep it real 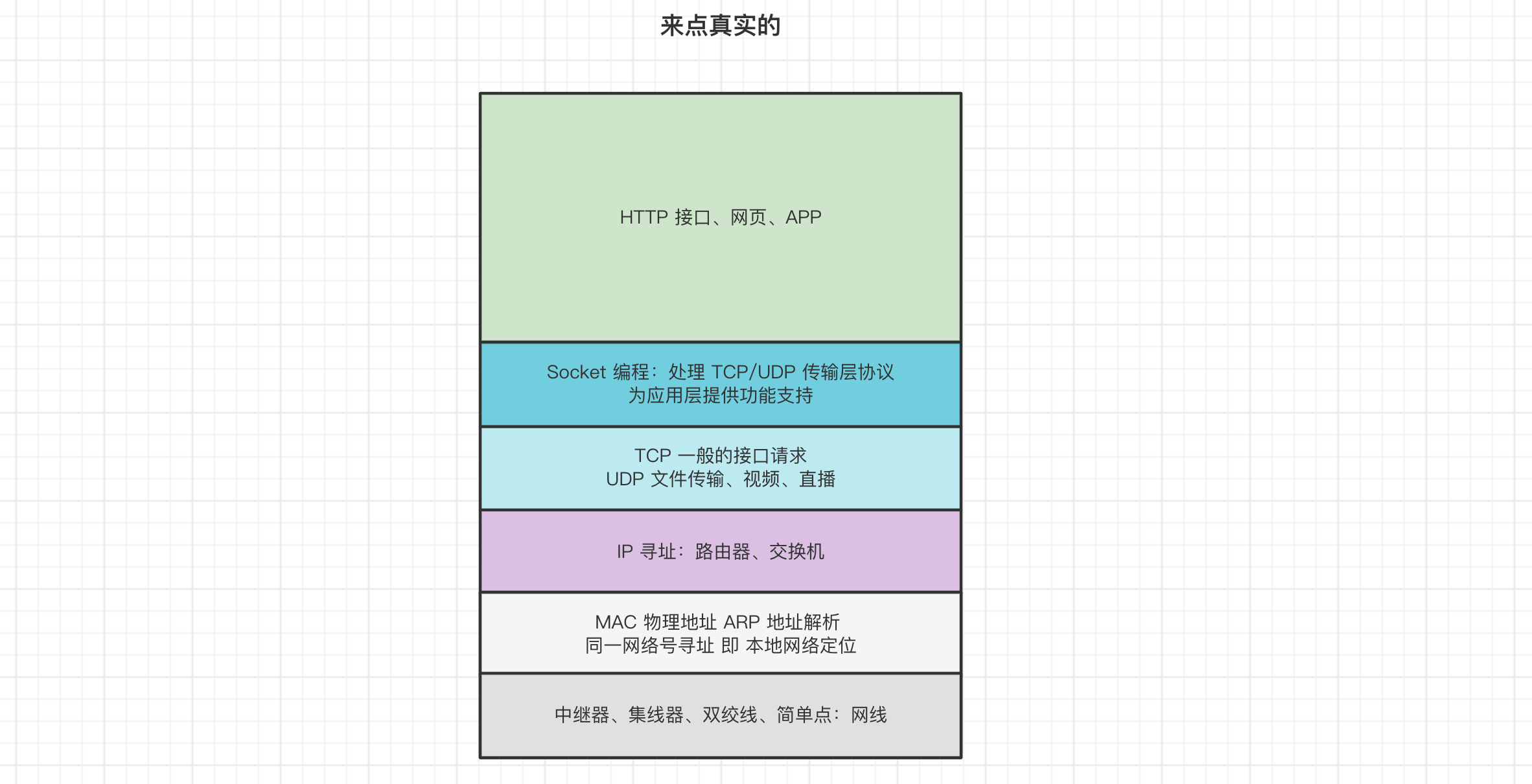 I have to say TCP and UDP

A question often asked: what is the difference between TCP and UDP? Usually the answer is this

TCP is connection oriented; UDP is for connectionless.

TCP is reliable, error free, loss free and sequence guaranteed; UDP is unreliable and not guaranteed

TCP can provide flow control and congestion control; UDP no

The above is probably a common answer, but for their own understanding, it seems that there is always some confusion in it. such as

What is the connection? Is it true that such an abstract link is maintained in the network cable?

No, "connection" means a path. In fact, it only exists at both ends, that is, the two ends that need communication.

I think it's very vivid that we send and receive express when we buy things. You and the merchant are at both ends. The network layer is equivalent to that you know the address of each other and send the package to the logistics. You don't know exactly what happened. You only care about the results, The "data structure" is the behavior correction made by the merchant and the buyer for the abnormal package, which is used to ensure that the express arrives correctly and intact.

Back to Socket programming

Through the above foreshadowing, we can know that Socket programming is actually end-to-end programming, which controls the logic on the end. Sometimes we will hear other related terms. Such as Socket file and Socket handle. In fact, on our most commonly used Linux server, Socket exists in the form of a file, so there is also a limit on the size of memory and the number of Socket connections, otherwise your server will break down sooner or later.

The following figure shows the pseudo code of Socket for the Java version of TCP protocol. Other languages have similar logic. 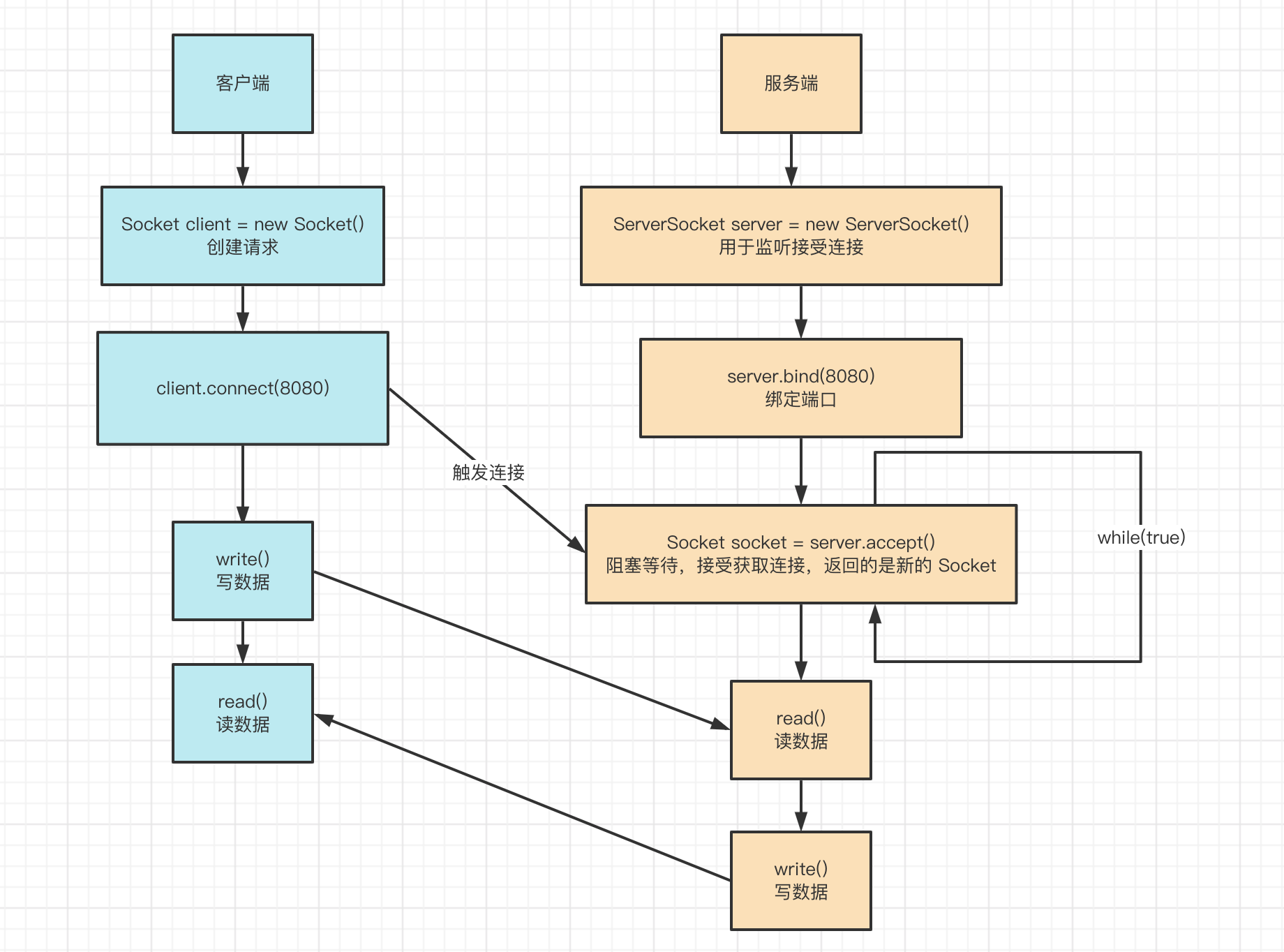 It can be found that the client does not seem to need to bind ports when creating Socket connections. This is because the system will randomly assign a port for connection. Because the client is only used by ourselves, we do not care about the number of client ports.

ok, based on theory, here I simply implement an RPC interface in Java to provide you with a practical reference.

This programming method is actually very primitive and has great room for improvement. For example, NIO or Netty can be optimized Introduction to BIO and NIO (Netty leader) , there are also ways of data transmission and reasons for space. There is a pit buried here. Let's continue to talk next time.