Solution to the sum of distances of 1405 trees

Given a rootless tree, suppose it has n nodes with node numbers from 1 to N, find the sum of the distances from the N nodes 1-n to the other n-1 nodes.

input
The first line contains a positive integer n (n < = 100000), indicating the number of nodes.
The following (n - 1) lines, two integers per line, represent the edges of the tree.
output
Each line is an integer, and the i(i = 1,2,... n) line represents the sum of the distances from all nodes to the i-th point.

At first glance, this problem seems to be graph theory. Establish an undirected graph, then traverse each point, calculate the distance between it and each point, and output it.
But the data range is (n < = 100000), and the time complexity is O (n ²) Applied constant. So sure TLE, we gave up the idea.
How to optimize it?
In fact, it's easy to think of trees here. If we first find a root (the topic gives a rootless tree) and calculate the depth dep[i] of each point, the distance between u and V is abs (dep[u]-dep[v]). But the time complexity of this idea is also O (n ²) About, it may be to optimize a little constant and still TLE.

At this time, we think of the size [] array in the tree section, that is, the size of the subtree of a node in the tree.
What's the use of it? We find that in a tree without rings, many distances are repeated.
For example, if I want to calculate the distance from point u to point v, the distance from point v to its subtree already knows. If I calculate it again, it will be a waste of time.

Therefore, we record that size[i] represents the number of nodes (including I) in the subtree with I as the root node, and f[i] represents the sum of the distance from I to other points
For example, the following figure: 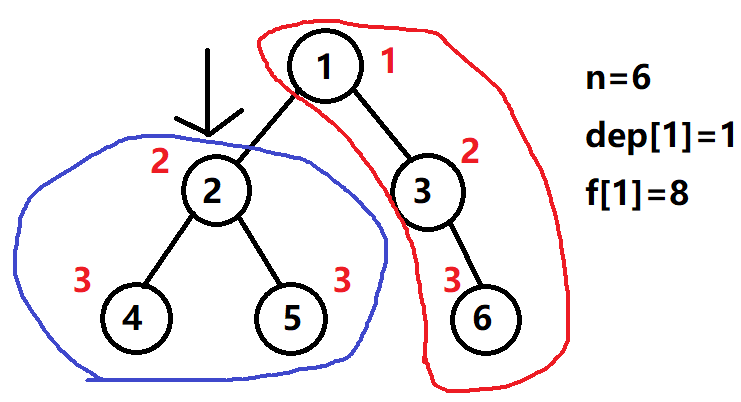 So it becomes treedp again...

It seems to save a lot of time.