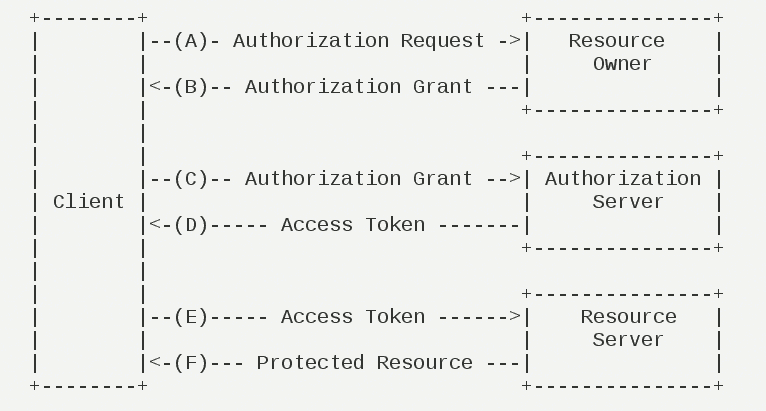 In this paper, we will use authorization code mode and password mode to realize user authentication and authorization management.

OAuth2 is actually a network standard about authorization. It formulates the design idea and operation process. Using this standard, we can actually realize the authentication process of OAuth2 by ourselves. Spring Cloud starter OAuth2 to be introduced today is actually a concrete implementation encapsulated by Spring Cloud according to OAuth2 standard and spring security.

Under what circumstances does OAuth2 need to be used

First of all, what we are most familiar with is what almost everyone has used, such as logging in with wechat, QQ, microblog, Google account, github authorization, etc. These are typical oauth2 use scenarios. Suppose we build our own service platform. If we do not use oauth2 login, we need the user to complete the registration first, and then log in with the account password of the registration number or the mobile phone verification code. After using OAuth2, I believe many people have used or even developed official account service and small program. When we enter the web page and small program interface, we need not register for the first time. We can login directly with WeChat, which greatly improves the efficiency of using. Because everyone has wechat, you can use third-party services immediately with wechat. This experience is not too good. For our service, we do not need to store the user's password, but only the unique ID and user information returned by the authentication platform.

In this way, did you find that this is actually a single sign on function. This is another use scenario. For multi service platforms, OAuth2 can be used to realize single sign on of services. After only one login, you can walk freely through multiple services. Of course, it is only limited to the services and interfaces within the scope of authorization.

This article first introduces the single sign on realized by password mode, and then continues to talk about authorization code mode in the next article.

Today, when microservices are rampant, who dares to say that they don't have many microservices. Microservices not only reduce the coupling between services, but also increase the complexity of the system in some aspects, such as user authentication. Suppose we implement an e-commerce platform here. What users see is an APP or a web site. In fact, it is composed of multiple independent services, such as user services, order services, product services, etc. As long as the user enters the user name and password for the first time, after logging in, the user can access various pages arbitrarily for a period of time, such as product list page, my order page, my attention page, etc.

We can imagine that we can naturally think of what credentials we must carry when requesting each service and interface, and then each service knows which user is requesting the interface. Otherwise, there must be a problem. In fact, the credentials in it are simply a Token, a Token identifying the user's identity.

Order service: oauth2 client order server, one of the microservices, will go to the Certification Center for verification after receiving the request.

User service: oauth2 client user server, the second of micro services, will go to the authentication center for authentication after receiving the request. 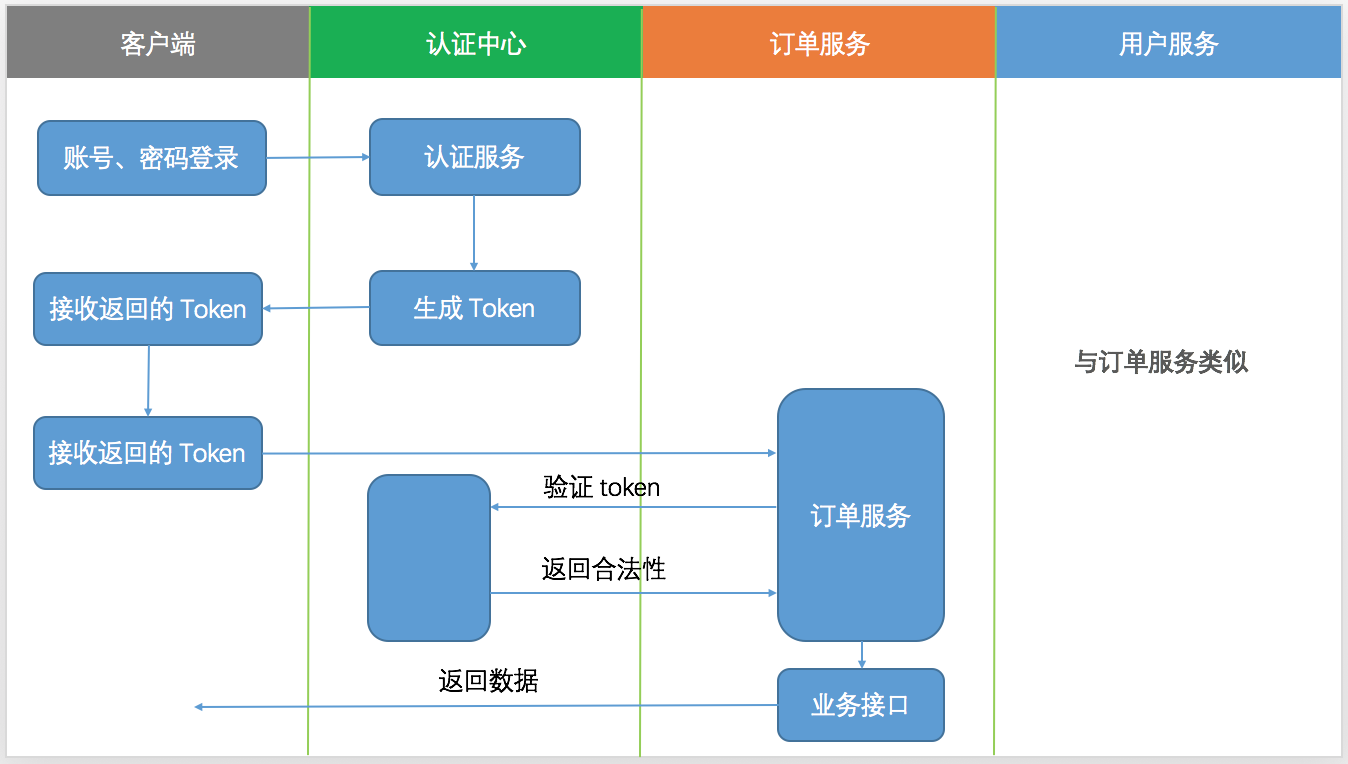 The above figure describes the request process between the client using OAuth2 and the microservice. The general process is that the client exchanges the user name and password to the authentication server for a token and returns it to the client. The client takes the token to each micro service request data interface. Generally, this token is placed in the header. When the microservice receives the request, it must first take the token to authenticate the server and check the legitimacy of the token. If it is legal, it will dynamically return data according to the user's role and authority.

Decorated with the @ EnableWebSecurity annotation and inherited from the WebSecurityConfigurerAdapter class.

If you have used Security before, you must be familiar with this class. It is not only a way to realize user authentication, but also the simplest and most convenient one. In addition, there is a way to combine Security with authentication provider. Let's talk about it when we have the opportunity to talk about Security.

The core of UserDetailsService is the {loadUserByUsername method, which receives a string parameter, that is, the passed user name, and returns a} UserDetails object.

In order to demonstrate, the user name, password and role are written in the code. In the formal environment, the encrypted password and role should be found from the database or other places according to the user name. The account admin and password 123456 will be used later in exchange for a token. And set the "ROLE_ADMIN" role for this user.

Create a configuration file that inherits from authorization server configureradapter

There are three overrides to the configure method.

redisTokenStore Bean is defined as follows:

Overriding the ClientDetailsServiceConfigurer parameter, where the constraints of each end are defined. include

Authorized grant types can include one or more of the following settings:

accessTokenValiditySeconds: the validity period of the token

scopes: used to restrict the access permission of the client. The scope parameter will be brought when exchanging token s. Tokens can only be exchanged normally if they are within the scope definition.

The above code is stored in inMemory. Saving the configuration in memory is equivalent to hard coding. In the formal environment, the method is to persist to the database, such as mysql.

The specific methods are as follows:

After Spring Boot 2.0, hikari is used as the database connection pool by default. If you use other connection pools, you need to import related packages and add configurations accordingly.

There is also an overridden method, {public void configure(AuthorizationServerSecurityConfigurer security), which restricts the client's access to the authentication interface.

The first line of code allows the client to access the OAuth2 authorization interface, otherwise the request token will return 401.

The second and third lines allow authorized users to access the checkToken interface and obtain the token interface respectively.

After completion, start the project. If you use IDEA, you will see oauth2 relevant RESTful interfaces in the Mapping window below. 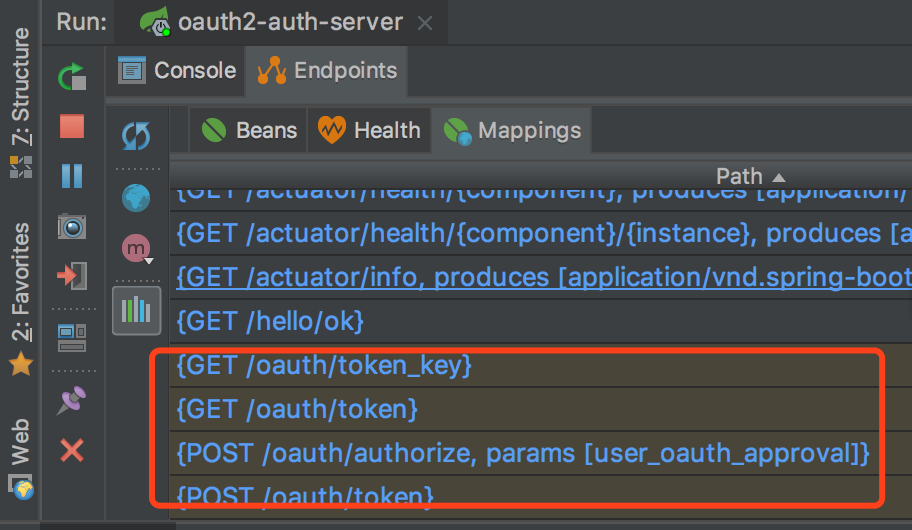 There are mainly the following:

The authentication server is created above, and now we start to create a client corresponding to the business-related microservices in our system. We assume that this microservice project manages user related data, so it is called user client.

Client ID and client secret should be consistent with the configuration in the authentication service. If inMemory or jdbc is used.

authorization. Check token access is also key information. When the server receives a request from the client, it needs to take the token in the request to the authentication server for token verification, which is the interface of the request

Because redis is used as token storage, a Bean called tokenService needs to be specially configured to verify tokens.

A RESTful method, only when the access user has a role_ Can only be accessed with admin permission, otherwise 401 unauthorized is returned.

Through the Authentication parameter or securitycontextholder getContext(). Getauthentication () can get the authorization information for viewing.

1. Start the authentication server, and the start port is 6001

I use the REST Client to make an access request. The request format is as follows:

Suppose we use grant on a web side_ Type is password, indicating that this is a password mode using OAuth2.

scope=all is permission related. The scope is specified as all in OAuthConfig of the authentication service.

Authorization should be added to the request header in the format of Basic space base64(clientId:clientSecret). The client ID of the microservice client is user client, and the client secret is user-secret-8888. Connect the two values through a colon, and use base64 encoding (user client: user secret-8888). The value after it is dxnlci1jbgllbnq6dxnlci1zwnyzxqtodg4oa = =, which can be https://www.sojson.com/base64.html Online code acquisition.

After running the request, if the parameters are correct, the returned content obtained is as follows, which is in json format

access_token: it is the token that needs to be carried in the subsequent request, and it is also the main purpose of this request
token_type: bearer, which is the most commonly used form of access token
refresh_token: you can then use this value to exchange for a new token without entering the account password
expires_in: expiration time of token (seconds)

4. Request the resource interface with the obtained token

We define an interface in the user client http://localhost:6101/client-user/get, now take the information obtained in the previous step token to request this interface.

Similarly, request header Authorization is required. The format is bear + space + token. Normally, the token will be returned as it is according to the logic of the interface.

5. After the token expires, use refresh_token for access_token

grant_type is set to refresh_token.

refresh_ The token is set to the refresh returned when the token is requested_ The value of the token.

Authorization is added to the request header, and the format is still Basic + space + Base64 (client ID: client secret)

After the request is successful, the same data format as the request token will be returned.

The above token storage uses the redis scheme. Spring Security OAuth2 also provides jdbc and JWT support. jdbc will not be considered for the time being. Now let's introduce how to use JWT to store tokens.

With JWT, you don't need to store the token to the server. JWT has its own special encryption method, which can effectively prevent data from being tampered with. As long as you don't put key information such as user password into JWT, you can ensure security.

JwtAccessTokenConverter is used for JWT data conversion because JWT has its own unique data format. If you haven't learned about JWT, you can search and learn about it first.

Note that the SigningKey set by the authentication server JwtAccessTokenConverter must be the same as the key value in the configuration file, otherwise JWT cannot be decoded normally, resulting in failure of verification.

Run the request to request the token interface

The returned results are as follows:

We have seen that the returned token is in JWT format. Go to the JWT online decoding website https://jwt.io/ Or http://jwt.calebb.net/ Decode the token and have a look 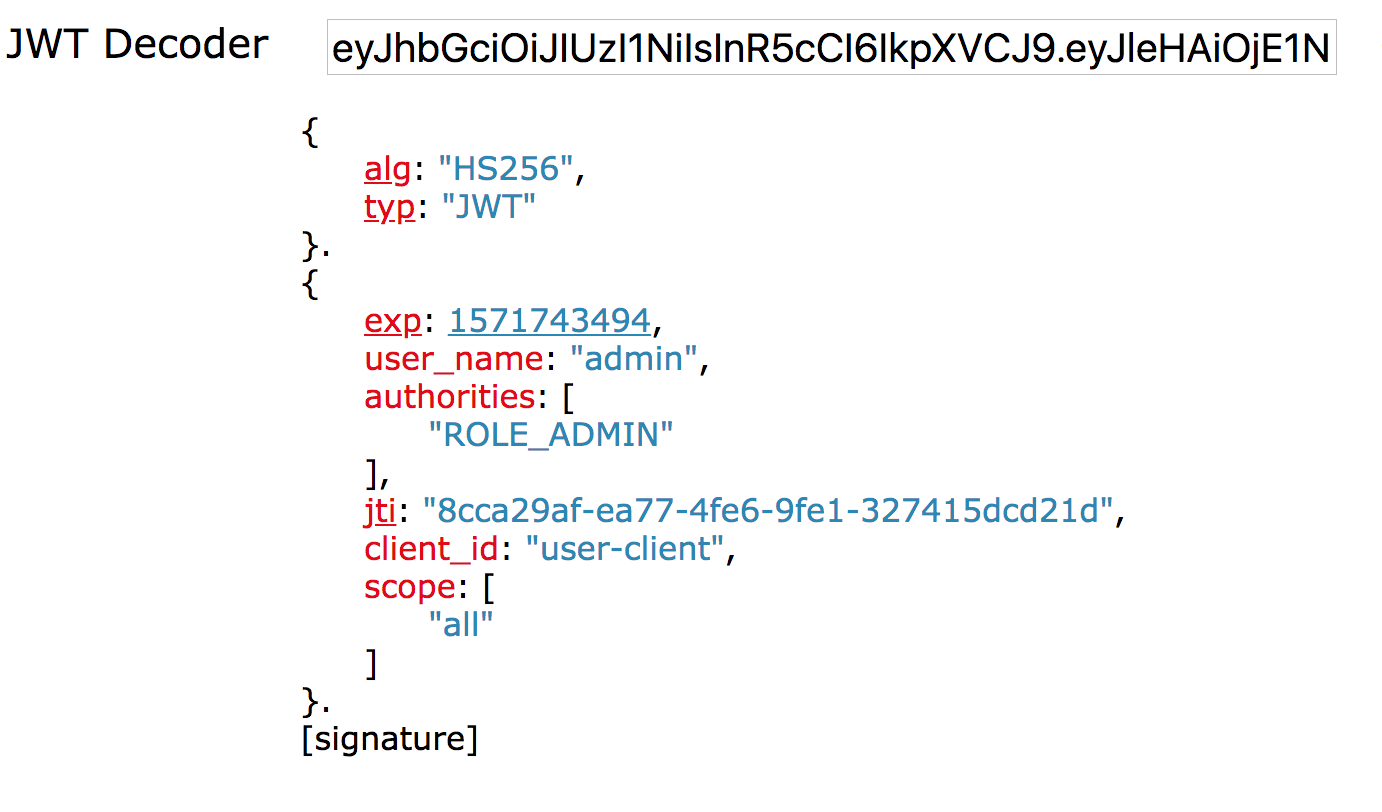 See, user_name,client_id and other information are included.

Request the user client interface with the returned token

What if I want to add additional fields (such as other user information) to JWT? Of course. spring security oauth2 provides a token enhancer. In fact, not only JWT, but also RedisToken.

The user name and other information can be obtained through oaut2authentication. Through these, we can query the database or cache to obtain more information, which can be added as JWT extension information.

Request the token again, and multiple JWT ext fields just added are returned in the content

If we add additional information to JWT, we may use it. After receiving the token in JWT format, the user client needs to parse the JWT.

Also note that the signature settings should be the same as the authentication server.

The returned contents are as follows:

The above is the complete process of password mode. The source code is put on github. You can have a look if you need it.