Spring's solution to circular dependency and consideration of three-level cache

Situations that cannot be solved:

Situations that can be solved:

2, How does SpringBoot solve the problem circularly?

First, let's talk about the life cycle of Bean

The place where circular dependency occurs is populateBean() where the attribute is set. The detailed process is as follows 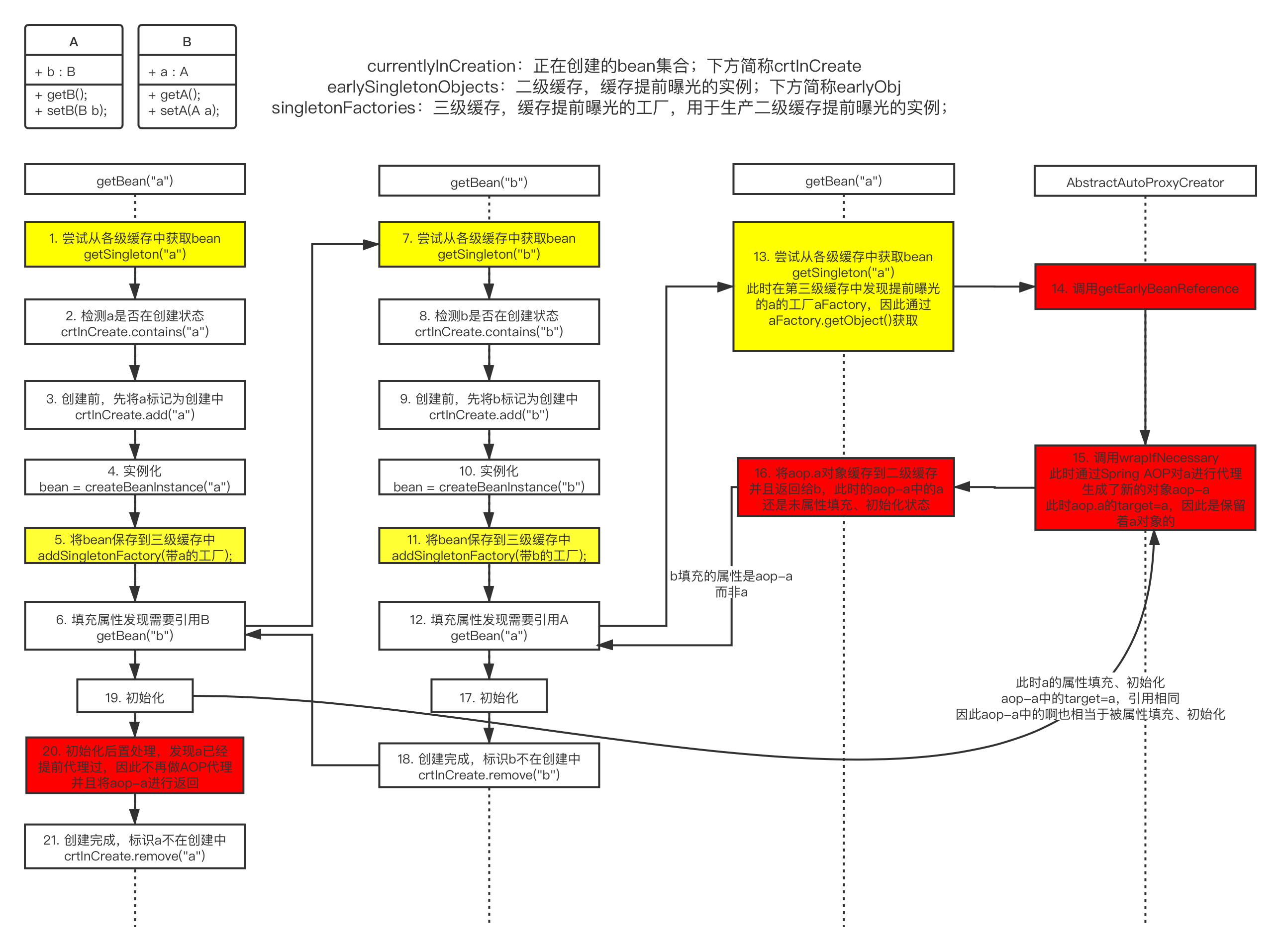 Add the L3 cache addsingletonfactory (beanname, () - > getEarlyBeanReference (beanname, MBD, bean)); The specific methods are as follows. In fact, it calls the getEarlyBeanReference of the post processor, and there is only one post processor that really implements this method, which is the annotation awareaspectjautoproxycreator imported through the @ EnableAspectJAutoProxy annotation. If there is no AOP, the original object will be returned directly, so the L3 cache must be used for AOP enhancement.

4, Why inject a proxy object when injecting B?

5, It is A object when initializing, so where does Spring put the proxy object into the container?

After completing the initialization, Spring calls the getSingleton method again, and the parameters passed in this time are different. false can be understood as disabling the L3 cache. As mentioned in the previous figure, when injecting A into B, the factory in the L3 cache has been taken out, and an object obtained from the factory has been put into the L2 cache, Therefore, the time for the getSingleton method here is to obtain the A object after the proxy from the L2 cache. exposedObject == bean can be considered to be valid unless you have to replace the Bean in the normal process in the post processor in the initialization stage, such as adding A post processor.

I have read many articles before, but I haven't made it clear why we must use L3 cache. Let's talk about my own thinking. If we directly use L2 cache here, addsingletonfactory (beanname, () - > getearlybeanreference (beanname, MBD, Bean)) means that all beans must complete AOP proxy in this step, It violates the design of Spring in the life cycle of combining AOP and Bean! The life cycle of Spring combining AOP with Bean is completed through the post processor AnnotationAwareAspectJAutoProxyCreator. In the post-processing postProcessAfterInitialization method, AOP proxy is completed for the initialized Bean. If there is a circular dependency, there is no way. We can only create an agent for the Bean first, but in the absence of circular dependency, the beginning of design is to let the Bean complete the agent at the last step of the life cycle, rather than immediately complete the agent after instantiation.