1. Can non Web applications use Spring Security for authorization? 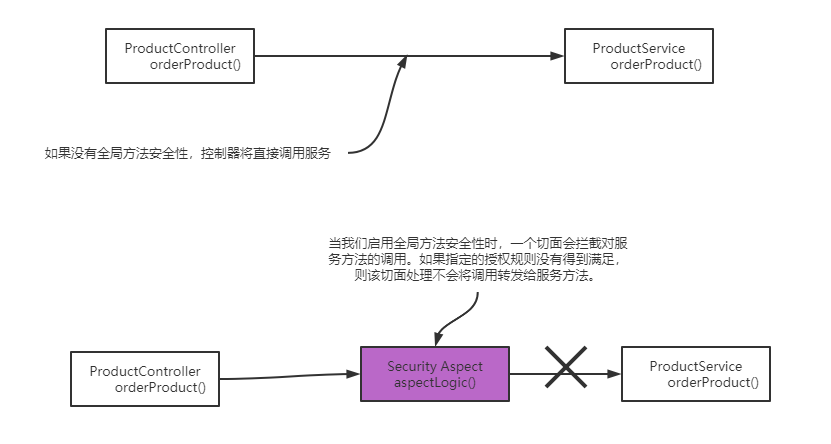 Many implementations in the Spring framework rely on aspect oriented programming (AOP). Global method security is just one of many components in Spring applications that depend on aspects. In short, we classify call authorization as:

suppose there is a findDocumentsByUser(String username) method, which will return the document of the specified user for the caller. The caller provides the user name that the method will use to retrieve the document through the parameters of the method. Suppose you need to ensure that authenticated users have intelligent access to their own documents. Can a rule be applied to the method so that the method call is only allowed to execute when the user name of the authenticated user is received as a parameter? The answer is yes! This is what you can do with pre authorization.

usually, if some conditions are not met, you may not want to perform a function at all. In this case, you can apply conditions according to the authenticated user, and you can also reference the value received by the method through its parameters.

2.1.2 authorization protection method call after use

generally, we apply authorization rules according to the content returned after the method is executed. But be careful to authorize after use! If the method changes during its execution, it will change whether the final authorization is successful or not.

a project will be used here to apply the pre authorization and post authorization features provided by global method security. In the Spring Security project, global method security is not enabled by default. To use it, you need to enable it first. However, enabling this feature is simple. You can do this simply by using the EnableGlobalMethodSecurity annotation on the configuration class.

global method security provides us with the authorization rules defined in the following three methods:

because pre authorization / post authorization annotation is the only method used in almost all cases, we will discuss this method here. To enable this method, you need to use the prePostEnabled property of the EnableGlobalMethodSecurity annotation.

here is an example of pre authorization. Pre authorization means defining authorization rules for Spring Security applications before calling specific methods. If these rules are violated, the framework will not call the method.

the application implemented here has a simple scenario. It exposes an endpoint / Hello that returns the string "hello" followed by a name. To get the name, the controller needs to call a service method. This method will apply pre authorization rules to verify whether the user has write permission.

UserDetailsService and PasswordEncoder are added here to ensure that some users can authenticate. To validate the solution, two users are required: one with write permission and the other without write permission. This proves that the first user can successfully call the endpoint, while for the second user, the application will throw an authorization exception when trying to call the method.

you can use the hasAuthority() method to define restrictions for users according to their permissions.

3.3 controller classes that implement endpoints and use services

start the application. We hope that only user emma has the right to call the endpoint because she has write authorization.

call the / hello endpoint and authenticate with user emma.

call the / hello endpoint and authenticate with user natalie.

Similarly, you can use any of the other expressions discussed earlier for endpoint validation.

hasAnyAuthority(): specify multiple permissions. The user must have at least one of these permissions to call this method.

hasRole(): Specifies the role that the user must play to call this method.

hasAnyRole(): specify multiple roles. The user must have at least one of these roles to call this method.

next, extend this example to show how to define authorization rules using the values of method parameters.

for this project, the same ProjectConfig class as the first example is defined here, so that the previous two users, Emma and Natalie, can continue to be used. The endpoint now gets a value through the path variable and calls a service class to get the "private name" of the given user name. Of course, in this example, the private name is just a noun referring to a feature of the user, which is not visible to everyone.

3.5 define the controller class of the test endpoint

the expression for authorization now is = = #name = = authentication principal. username==. In this expression, we use #name to refer to the value of the getSecretNames() method parameter named name, and we can directly access the authentication object, which can be used to refer to the currently authenticated user. The expression used here indicates that the method can only be called if the user name of the authenticated user is the same as the value sent through the method parameter. In other words, users can only retrieve their own names.

start the application and test it.

when using emma for authentication, we try to obtain the secret name of natalie. But the call does not work:

however, user natalie can get her secret name.

Remember that global method security can be applied to any layer of the application.

now, suppose you want to allow calls to methods, but in some cases, you want to ensure that the caller does not receive a return value. We need to use post authorization when we want to apply the verified authorization rules after the method call. This may sound strange: why can someone execute code without results? Of course, this has nothing to do with the method itself, but imagine that this method will retrieve some data from a data source, such as a Web service or database. We can be sure of what the method does, but we don't trust the third party who calls the method. Therefore, we should allow the method to execute, but verify what it returns. If the condition is not met, the caller is not allowed to access the return value.

to use Spring Security post application authorization rules, you need to use the @ PostAuthorize annotation, which is similar to @ PreAuthorize. This annotation accepts the value of the SpEL that defines the authorization rule. Next, we will define the @ authorize method as an example and show how to use the @ authorize method.

you also need to declare a class to represent the Employee object with the Employee's name, book list and role list.

we may need to obtain employee details from the database. To make this example simple, we use a Map that contains some records that we treat as data sources.

write a controller and implement an endpoint to call the method for which the authorization rules are applied.

call the endpoint to obtain the details of emma and authenticate with user emma.

call the endpoint to obtain the details of emma and authenticate with user natalie.

call the endpoint to obtain the details of natalie and authenticate with user emma.

call the details of the endpoint natalie and authenticate with the user natalie.

Tip: if the requirement requires both pre authorization and post authorization, you can use @ PreAuthorize and @ PostAuthorize on the consent method at the same time

license application authorization rules within the project will be used here. In this scenario, there is an application that manages documents. Any document has an owner, the user who created it. To get the details of an existing document, the user must be either an administrator or the owner of the document. A license evaluator needs to be implemented to address this requirement.

in order to simulate the database and simplify the example, a repository class is created here, which will manage several document instances in the Map.

here, we need to annotate this method with @ PostAuthorize and use hasPermission() spiel expression. This method refers to the external authorization expression further implemented in this example. At the same time, please note that the parameter provided for the hey hasPermission() method is returnObject, which represents the value returned by the method and the name of the role allowed to access, that is, "ROLE_admin".

for the current example, the first method is sufficient. We already have an object. In our example, it is the value returned by the method. Also send the role name "Role_admin", which can access any document according to the definition of the sample scenario. Of course, in this example, you can use the name of the role directly in the license evaluator class and avoid sending it as the value of the hasPermission() object. In the actual scenario, the situation may be more complex.

we also want to mention here that we do not need to pass the Authentication object. Spring Security will automatically provide this parameter value when calling the hasPermission() method. The framework knows the value of the Authentication instance because it is already in the SpringContext.

in order for Spring Security to know the new PermissionEvaluator implementation, a MethodSecurityExpressionHandler must be defined in the configuration class.

5.6 configure PermissionEvaluator in the configuration class

as for users, the only thing to pay attention to is their roles. User natalie is an administrator and can access any document. User emma is a manager who has intelligent access to his own documents.

to test the program, define an endpoint here.

call the endpoint to obtain the document belonging to natalie, and use the user natalie for authentication.

Obtain a user's endpoint   and use it for authentication.

call the endpoint to obtain the document belonging to natalie and authenticate with user emma.