What is a distributed system?

What is a distributed system?

Distributed system is a system composed of a group of computer nodes that communicate through the network and coordinate to complete common tasks. The emergence of distributed system is to use cheap and ordinary machines to complete the calculation and storage tasks that can not be completed by a single computer. Its purpose is to use more machines to process more data.

distributed system is a software system based on network.

First of all, it should be clear that we need to consider distributed systems only when the processing capacity of a single node can not meet the increasing computing and storage tasks, and the improvement of hardware (adding memory, adding disk and using better CPU) is too high to pay off, and the application can not be further optimized. Because the problems to be solved by the distributed system itself are the same as those of the single machine system. Due to the multi node and network communication topology of the distributed system, many problems that the single machine system does not have will be introduced. In order to solve these problems, more mechanisms and agreements will be introduced to bring more problems...

With the development of the Internet and the continuous expansion of the scale of website applications, the conventional vertical application architecture can not cope with it. The distributed service architecture and mobile computing architecture are imperative, and a governance system is urgently needed to ensure the orderly evolution of the architecture.

There is such a picture on Dubbo's official website

When the website traffic is very small, only one application is needed to deploy all functions together to reduce deployment nodes and costs. At this time, the data access framework (ORM) used to simplify the workload of addition, deletion, modification and query is the key. 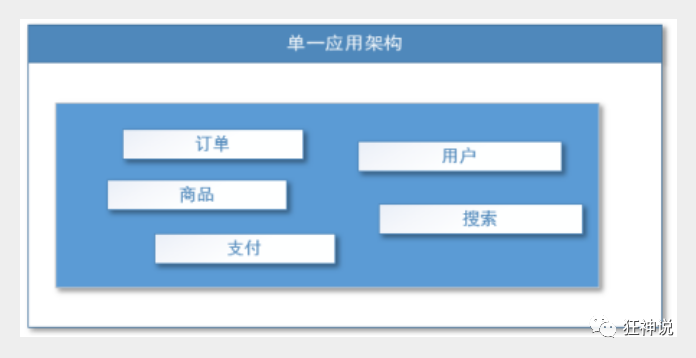 It is applicable to small websites and small management systems. All functions are deployed into one function, which is simple and easy to use.

3. Not conducive to upgrade and maintenance

When the number of visits increases gradually, the acceleration brought by a single application increases and the machine decreases. Split the application into several unrelated applications to improve efficiency. At this time, the Web framework (MVC) for accelerating front-end page development is the key. 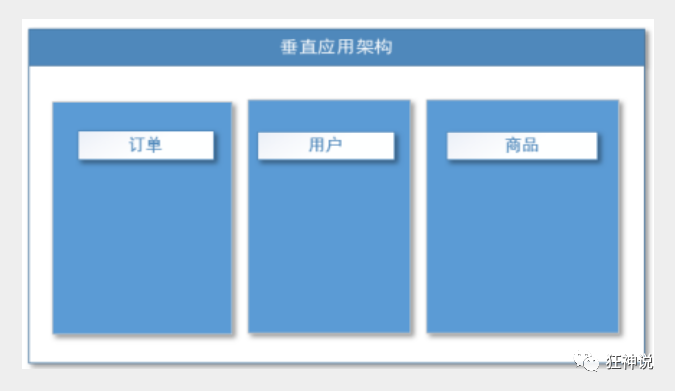 The independent deployment of each module is realized through business segmentation, which reduces the difficulty of maintenance and deployment. The team performs its own duties, which is easier to manage, and the performance expansion is more convenient and targeted.

Disadvantages: common modules cannot be reused, which is a waste of development

When there are more and more vertical applications, the interaction between applications is inevitable. Extract the core business as an independent service, and gradually form a stable service center, so that the front-end application can respond to the changing market demand more quickly. At this time, the distributed service framework (RPC) used to improve business reuse and integration is the key. 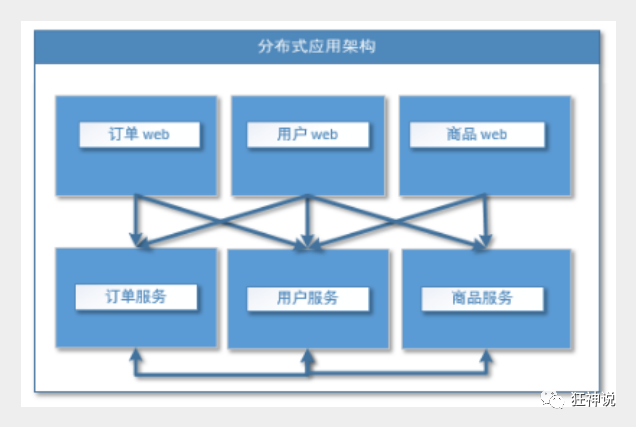 When there are more and more services, problems such as capacity evaluation and waste of small service resources gradually appear. At this time, it is necessary to add a dispatching center to manage the cluster capacity in real time based on the access pressure and improve the cluster utilization. At this time, the resource scheduling and Governance Center (SOA) [Service Oriented Architecture] used to improve machine utilization is the key. 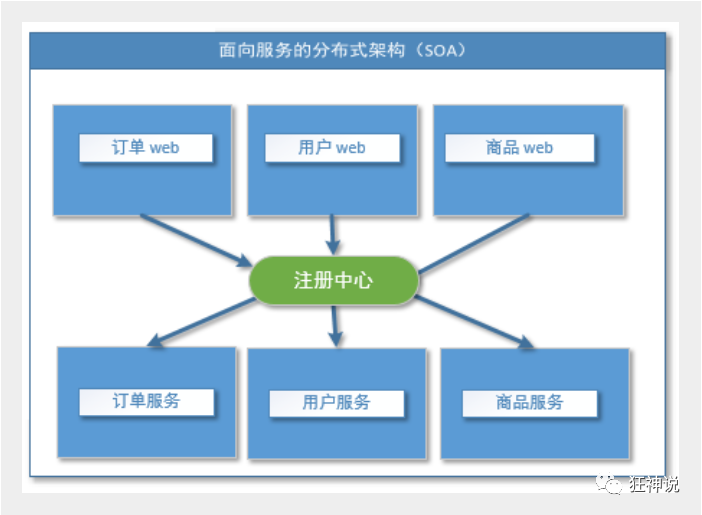 RPC [Remote Procedure Call] refers to Remote Procedure Call. It is a way of inter process communication. It is a technical idea, not a specification. It allows a program to call a procedure or function in another address space (usually on another machine sharing a network) without the programmer explicitly encoding the details of the remote call. That is, whether programmers call local or remote functions, the calling code written by programmers is basically the same.

In other words, two servers a and B, one application is deployed on server A. if you want to call the functions / methods provided by the application on server B, they cannot be called directly because they are not in the same memory space. You need to express the semantics of the call and convey the data of the call through the network. Why use RPC? It is a requirement that cannot be completed in a process or even in a computer through local call, such as communication between different systems, or even communication between different organizations. Due to the horizontal expansion of computing power, applications need to be deployed on a cluster composed of multiple machines. RPC is to call remote functions like calling local functions; 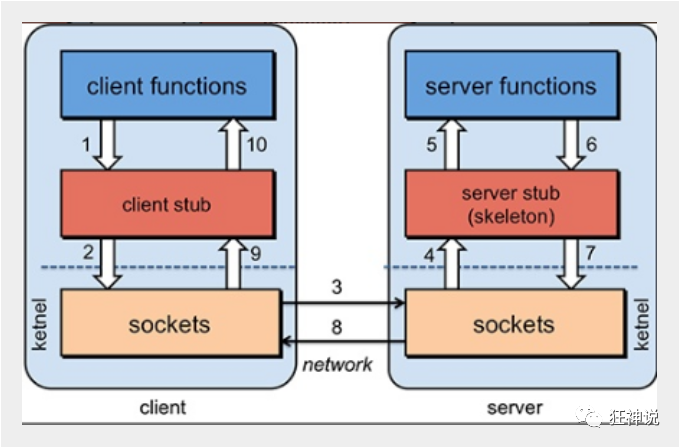 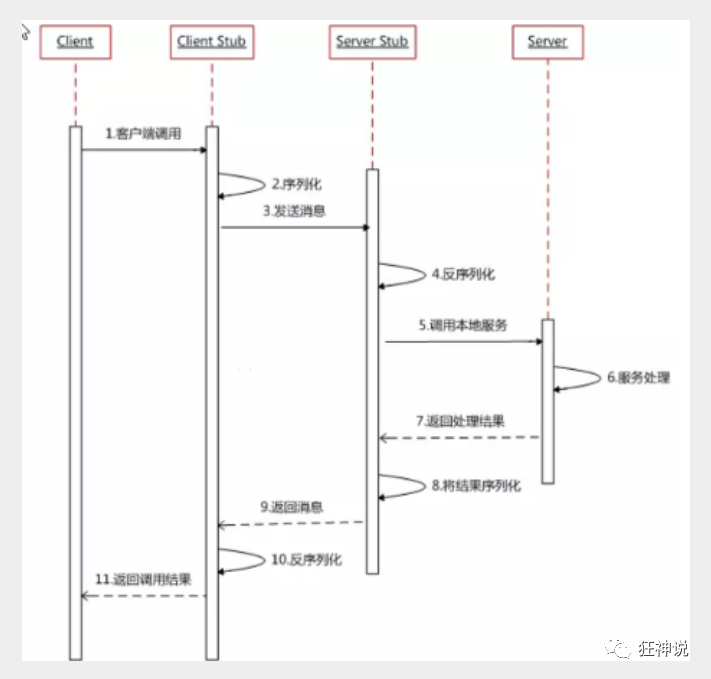 1. Understand the characteristics of Dubbo 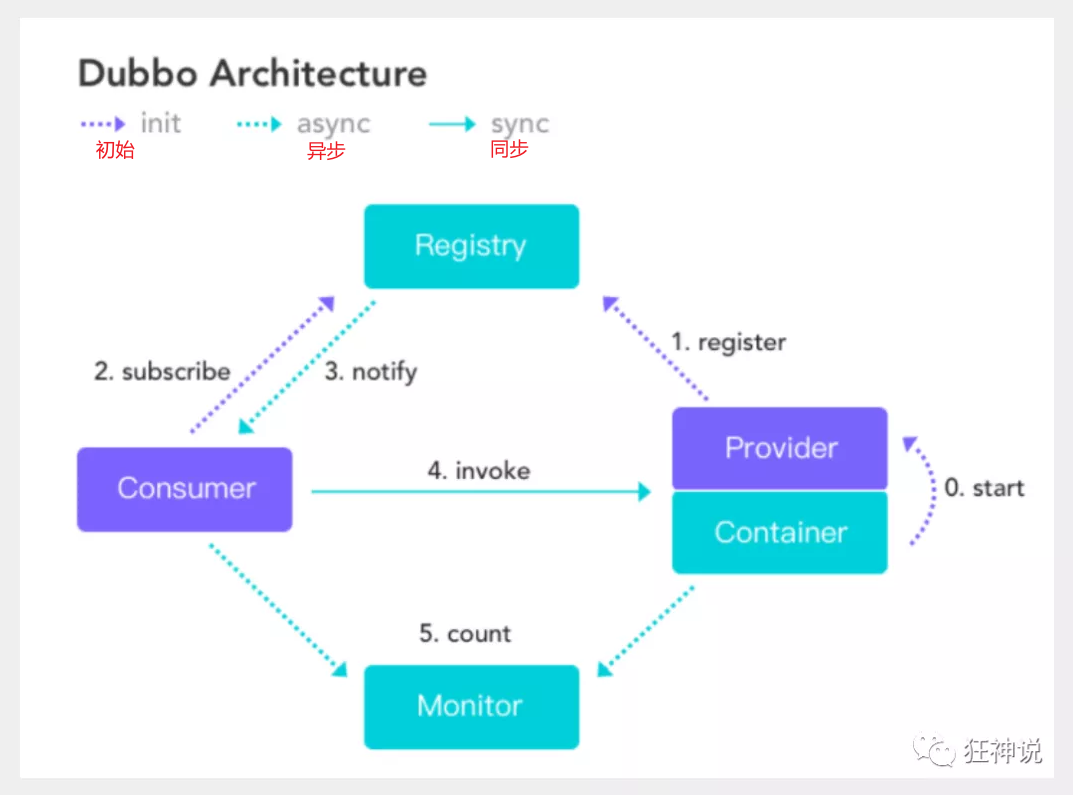 l the service container is responsible for starting, loading and running the service provider.

l when the service provider starts, it registers its services with the registry.

l service consumers subscribe to the services they need from the registry when they start.

l the service consumer selects one provider from the provider address list based on the soft load balancing algorithm to call. If the call fails, select another one to call.

What is zookeeper? You can view official documents Apache ZooKeeper

2. Run / bin / zkserver CMD, an error will be reported during the initial operation, and there is no zoo CFG configuration file;

Solution: edit zkserver Add pause at the end of CMD file. In this way, if there is an error in operation, it will not exit, and an error message will be prompted to find the reason. 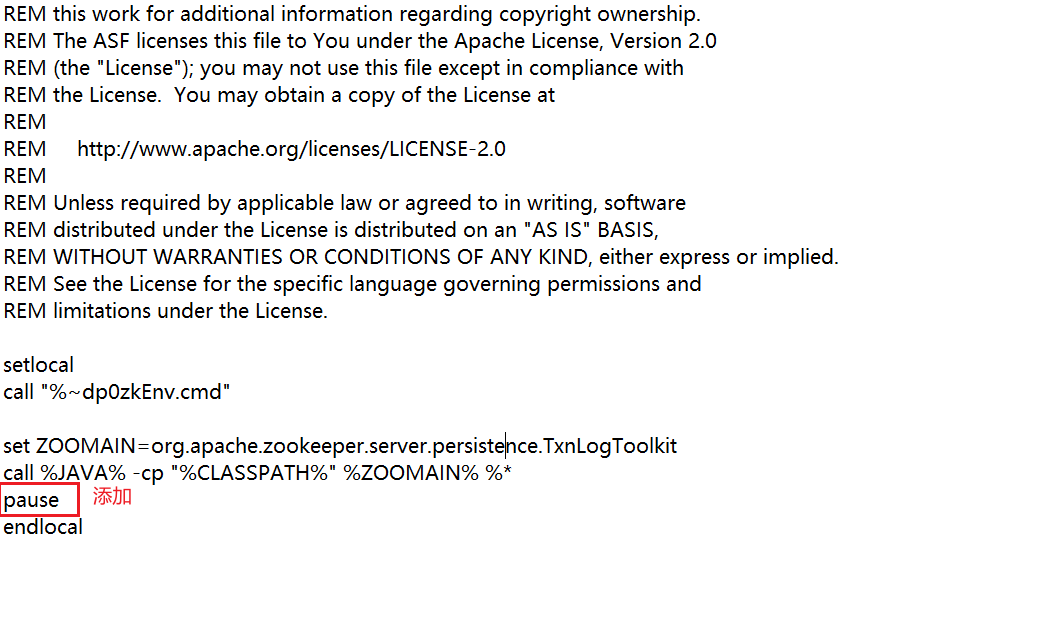 Put the zoo under the conf folder_ sample. CFG copy and rename it zoo CFG is enough.

clientPort=2181; the port number of zookeeper

After the modification is completed, start zookeeper again

ls /: lists all nodes saved under the root of zookeeper

dubbo itself is not a service software. It is actually a jar package, which can help your java program connect to zookeeper and use zookeeper to consume and provide services.

However, in order to allow users to better manage and monitor many dubbo services, the official provides a visual monitoring program dubbo admin, but this monitoring will not affect the use even if it is not installed.

The first packaging process is a little slow and requires patience! Until success! 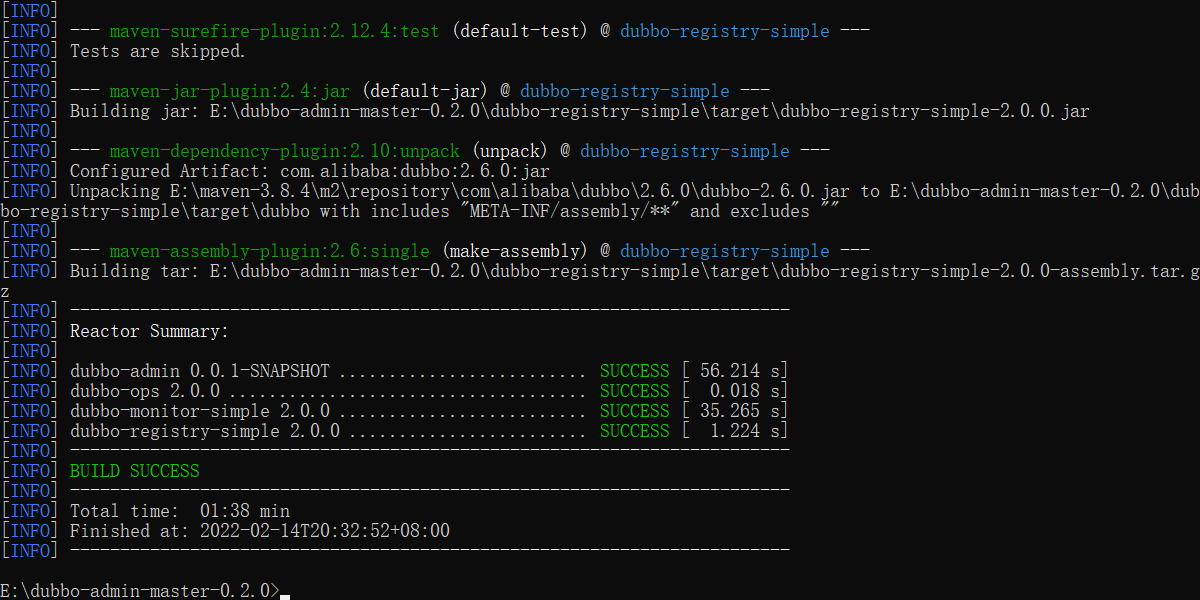 [Note: zookeeper's service must be turned on!]

After execution, let's visit http://localhost:7001/ At this time, we need to enter the login account and password. We are the default root root;

After successful login, view the interface 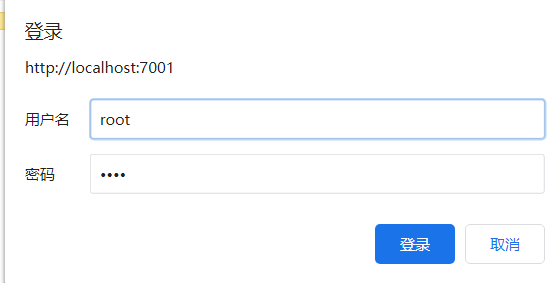 Premise: zookeeper service has been started!

1. Provision of services by providers

2. Configure the address of the registry, the service discovery name, and the package to be scanned~

3. Add a comment on the Service you want to register under @ Service dubbo

2. Configure the address of the registry and configure your own service name~

4. After the project is created, we write a service, such as ticket selling service;

6. After the project is created, we write a service, such as the user's service;

Demand: now our users want to use the ticket buying service. How can we do this?

1. To register the service provider in the registry, we need to integrate Dubbo and zookeeper, so we need to import the package

We enter github from dubbo's official website, look at the help document below, find dubbo springboot, and find the dependent package

We'll go to maven warehouse to download the package of zookeeper, zkclient;

[new version of pit] zookeeper and its dependency package. To solve log conflicts, you also need to eliminate log dependencies;

3. Configure the service annotation in the service implementation class and publish the service! Pay attention to the problem of guide package

Logical understanding: when the application starts, dubbo will scan the service with @ component annotation under the specified package and publish it in the specified registry! 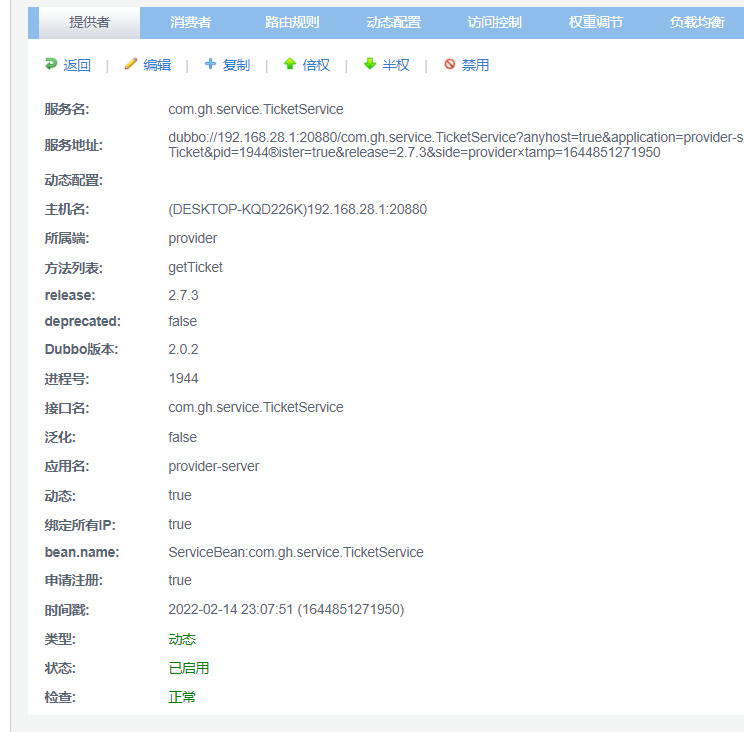 1. Import dependency, the same as the previous dependency; 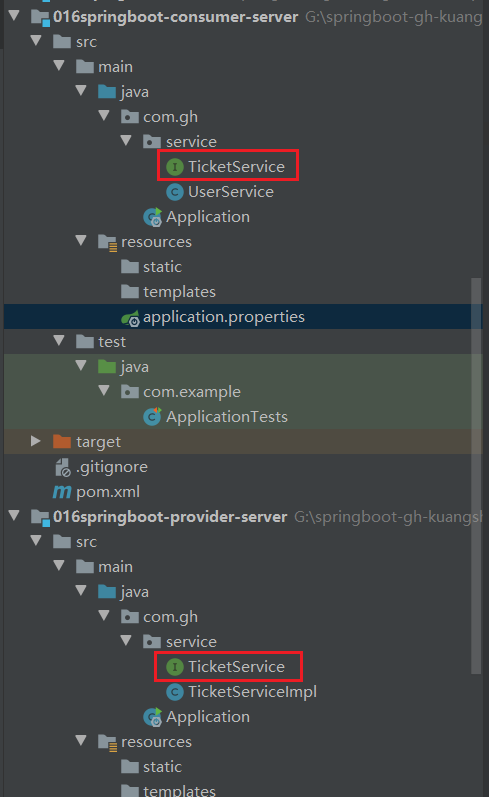 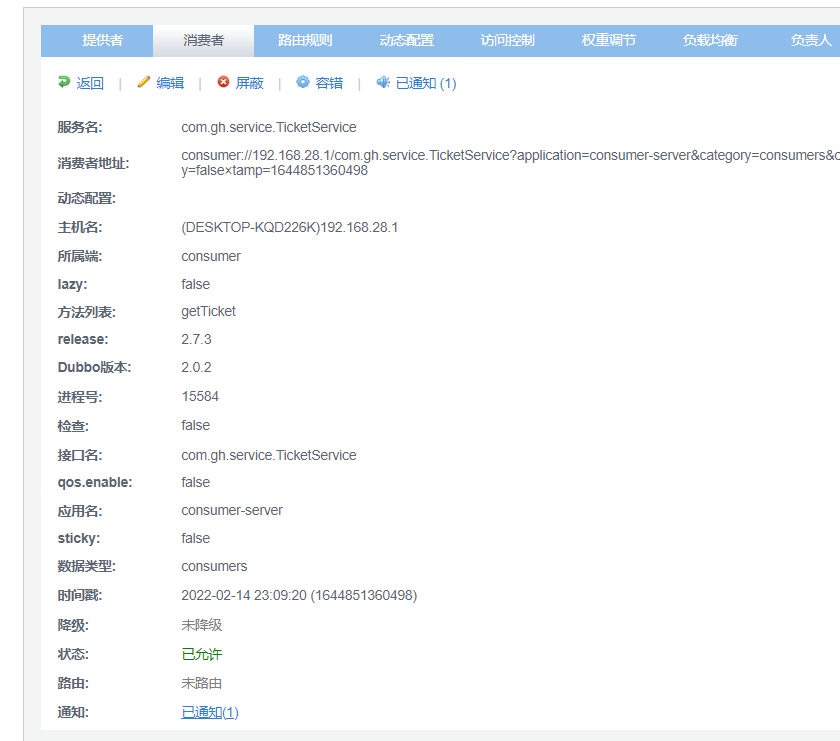 2. Open Dubbo admin to realize monitoring [no need to do]

ok, this is the application of SpingBoot + dubbo + zookeeper to realize distributed development. In fact, it is an idea of service splitting;

Suppose that server A occupies 98% of resources and server B only occupies 10%-- Load balancing;

There are many users and very few sign in! Give users more servers and fewer servers for check-in!

2. With so many services, how can services communicate with each other?

3. How to manage so many services?

4. What if the service hangs up?

Solution: spring cloud is a set of ecology, which is to solve the above four problems of distributed architecture

1.Spring Cloud NetF1ix has come up with a set of solutions! One stop solution. We can all get it right here?

At the end of 2018. NetF1ix announced to stop maintenance indefinitely. I f the ecology is no longer maintained, it will be disconnected

API: no! Either find a third-party component or implement it yourself

Dubbo is a high-performance RPC communication framework based on Java implementation! three

No circuit breaker mechanism: with the help of Hystrix

At present, another scheme is proposed:

Representative solution: istio (you may need to master it in the future!)

All changes are inseparable from their ancestors. They are all accessible!

If you develop a solution based on these four problems, it is also called spring cloud!

Why solve this problem? Essence: the network is unreliable!