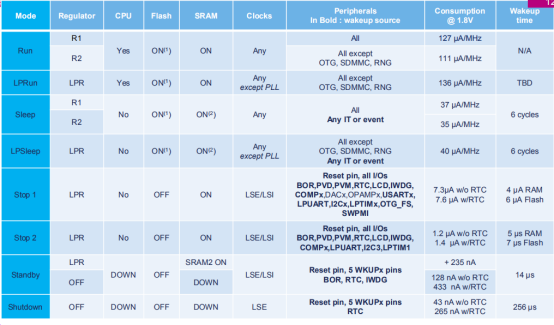 In stop2 mode, data in sRAM will not be lost, LSE and LSI clocks will not be turned off, supporting multiple wake-up modes. RTC wake-up, LPTIM wake-up and LPUART are currently used here.

In this way, the most important thing is to consider 1. how to configure the clock, 2. how to configure the wake-up source before entering stop2 mode 3. The wake-up clock will resume 4. The most important thing is that when we enter stop2, the main clock will turn off, so the period of time after sleep will be lost. When waking-up, low power consumption will cause task scheduling abnormalities, how to find this backTime is the key to success.

Before we do that, we usually look for some reference programs, and st officially provides the process of RTC wake-up and LPUART wake-up stop2 mode

But they are all without system, but we usually implement a project, using bare machine front and back task operation for multitask processing is more cumbersome, here added FreeRTOS real-time system.

Through the system's own function, the time to the next task, that is, the time to sleep, is dynamically calculated, and then set to RTC, at which time the sleep time is known, sleep does not affect task scheduling.However, when LPUART wake-up is added, scheduling becomes more complex, because you don't know when your serial port wake-up will come, and the clock will be restored when it comes, so the scheduling will be wrong.It is true that there are two tasks defined, a serial port task and a 1s periodic light-on task. After introducing LPUART wake-up, the lamp flickers abnormally, which affects the system scheduling time.

Clock allocation is a critical step in low power consumption.How to set it? 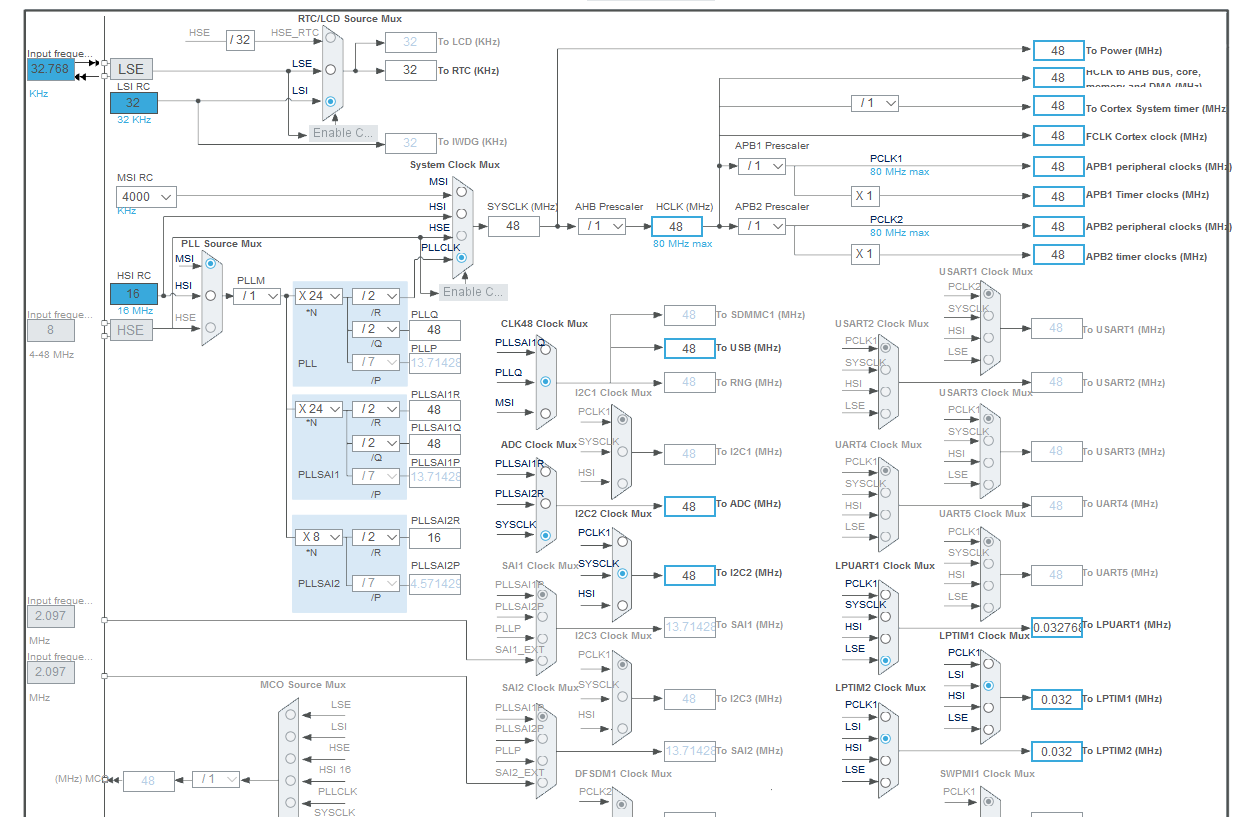 1. There are several key points in this area. RTC uses LSI 32Khz clock, but LSE can also be used. As long as RTC is well associated with the corresponding clock and RTC is initially initialized with crossover, otherwise wake-up time will be inaccurate. How RTC time is calculated can refer to this blog

Note that our LSI is 32K, and he uses a different model inside. The clocks are different.

2. The MSI used by our main clock, up to 48M, can also be used with HSI, but HSI can only reach 16M, there is a certain relationship between the reason of using 48M and the wake-up time.Official data say that at 48MHz MSI, it can wake up at 1us.

Be careful not to use the HSE clock (never used).At the same time, the system needs to manually configure the clock LL_RCC_SetClkAfterWakeFromStop(LL_RCC_STOP_WAKEUPCLOCK_MSI) after waking up;

3.LPUART uses LSE instead of PCLK because it will be turned off after low power consumption, but note that LSE only supports a maximum baud rate of 9600, and data loss will occur if the baud rate is large (usually the first byte is lost).

4. After waking up, restore the stop2 sleep time, or it will not work properly.

2. How do I incorporate stop2 wake-up and sleep into FreeRtos?

st generally provides bare-metal operations in the process, so how to join in freertos, has said before, the principle of free Rtos low power consumption is to go to sleep when idle tasks, task scheduling when wake up, idle longer, the lower power consumption is sure.We need to refer to the tickless mechanism provided by freeRtos.

The tickless power consumption mode is now started, and the approximate entity function in tickless is vPortSuppressTicksAndSleep(). The general idea is as follows:

When the processor enters an idle task, turn off the system clock (turn off the tick timer interrupt), when other interrupts occur or other tasks need to be processed, the processor wakes up because the system clock is turned off and this time needs to be supplemented (it is implemented using the tick timer), and the execution time in the low-power mode is obtained through some mechanisms, and the time is supplemented after waking upCompensation, to achieve accurate wake-up.

At the same time, for lower power consumption, some interfaces have been made for user supplement.

This implements the user's own functions, such as frequency down, interrupt off, peripheral off and so on.

2. When we sleep with RTC

The phenomenon is normal, because we use freeRTOS to get sleep time, but we do not know the wake-up time of peripherals such as LPUART, and the tick clock in stop mode is stopped, so it must be a problem to run.

FreeRTOS does also support the refactoring of vPortSuppressTicksAndSleep

Then the tick clock uses LPTIM to record the compensation time???vPortSuppressTicksAndSleep under Refactoring??

1.Stop 2 mode is based on Cortex-M4 deep sleep mode and external clock gating.In top 2 mode, all clocks in the Vcore domain are stopped and PLL, MSI, HSI16 and HSE oscillators are prohibited.Some peripherals with wake-up capabilities (I2C3 and LPUART) can turn on HSI16 to get a frame, or turn off HSI16 after receiving a frame if it is not a wake-up frame.SRAM1, SRAM2, SRAM3, and register contents will be retained, and all I/O pins will be in the same state as in run mode.

2. According to the manual, Stop 2 mode will turn off the system clock, and the current OS Tick is based on the kernel of the Systeick timer.OS Tick will also stop after the system clock stops. For some OS Tick-dependent applications, problems will occur after entering Stop 2 mode and waking up after interruption, so OS Tick needs to be compensated after the system wakes up.In Stop 2 mode, most peripherals stop working. Only when the low power timer 1 (LP_TIM1) chooses LSI as the clock source, it still works properly, so LP_TIM1 is chosen as the time compensation timer in Stop 2 mode.

3. Next, sleep time is obtained by LP_TIM1, which is indeed obtained, but how to compensate to the clock source, it is directly assigned to the system clock.However, while sleeping again, freertos's own function to get the next task time made a mistake, indicating that it's not right to restore the system clock.

The overall idea should be right, but stuck here. Later, I thought that if the serial interrupt is triggered frequently and the power consumption will be affected by the continuous recovery from the stop2 mode, I decided to distinguish the two situations. stop2+RTC will wake up if the current period of time can sleep, and other system clocks such as LPRUN low power mode or sleep will not stop if it is necessary to receive the serial port at this stage.Mode to switch between multiple modes.Switch to a different low power mode in different situations.

My stm32l476 board consumes about 3ma in clock sleep mode of 48MHZ system.stop mode is less than 1ma, and tests show that most of the power consumption is in the clock block.(Only one flash task is on in freeRTos, cycle 1s)

Note: In low power applications, we usually pull down the pins to prevent leakage of current, but pay attention to the matching of hardware and software.If a pull-down resistance is added to the serial port and you configure it with a pull-up output, some unnecessary power loss will result.

In order to achieve lower power consumption under the condition of satisfying the performance, it seems impossible not to proceed with the whole process. It is OK to get it out and use it, but the stability should be verified, and several core functions should be marked out.

2. Configuration of RTC for user wake-up

4. The operations in the tickless function can also be generated directly from a new function, which I change directly based on tickless.Only two were added