2. Differences between firewalld and iptables

3. The concept of firewalld region

firewalld and iptables They are tools used to manage firewalls (in the user state) to define the various rule functions of the firewall, and their internal structure points to the netfilter network filtering subsystem (in the kernel state) to implement the packet filtering firewall function.

firewalld provides dynamic firewall management tools that support network connections defined by network zones and security levels of interfaces. It supports IPV4, IPv6 firewall settings, and Ethernet bridges (which may be used in some advanced services, such as cloud computing), and has two configuration modes: runtime configuration and permanent configuration.

2. Differences between firewalld and iptables

3,
Using iptables for each individual change means clearing all old rules and reading all new rules from/etc/sysconfig/iptables.
With firewalld, no new rules are created, just the differences in the rules are run. Firealld can therefore change settings during runtime without losing existing connections.

3. The concept of firewalld region

The firewalld firewall divides all network traffic into zones to simplify management. Then, according to the source IP address of the packet or the incoming network interface, the traffic is transferred to the corresponding area. Each zone defines its own list of ports and services to open or close. 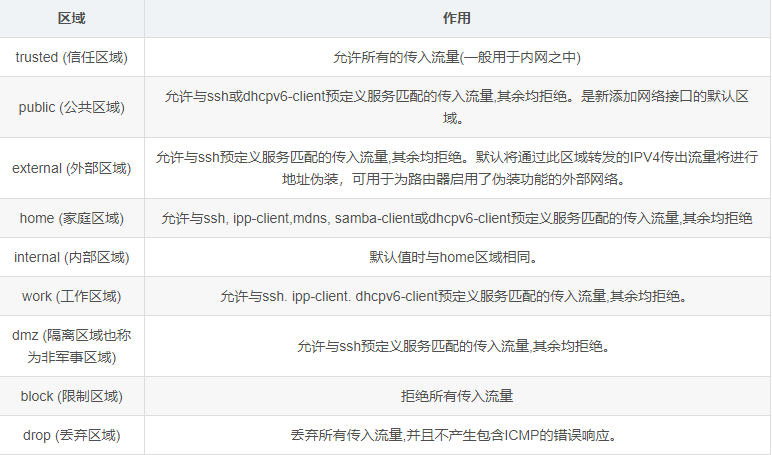 The security level of the final zone depends on the rules set by the administrator in that zone.
Regions are like security gates that enter the host. Each region has rules with varying degrees of restriction that allow only traffic that meets the rules to enter. One or more zones can be used depending on the size of the network, but any active zone requires at least one associated source address or interface.
By default, the public zone is the default zone and contains all interfaces (network cards).

Check the source address of the data source