Java thread pool is the most used concurrent framework. Almost all programs that need to execute tasks asynchronously or concurrently can use thread pool. Rational use of thread pool can bring several benefits:

(2) improve the response speed. When processing and executing a task, the task can be executed immediately without waiting for the creation of a thread.

(3) improve the manageability of threads. Threads are scarce resources. If they are created without restrictions, they will not only consume system resources, but also reduce the stability of the system. Using thread pool can be used for unified allocation, tuning and monitoring.

In the thread pool, the ctl field is used to represent the current state in the thread pool. The main pool control state ctl is of AtomicInteger type, which encapsulates two conceptual fields: workerCount and runState. workerCount represents the number of effective threads, and runState indicates whether it is running or closing. The ctl field is used to represent two concepts. The first three bits of the ctl represent the thread pool status. In the thread pool, the workerCount is limited to (2 ^ 29) - 1 (about 500 million) threads instead of (2 ^ 31) - 1 (2 billion) threads. workerCount is the number of working programs that are allowed to start and not allowed to stop. This value may be temporarily different from the actual number of active threads, for example, when ThreadFactory fails to create a thread when asked, and when the exiting thread is still executing timing before termination. The pool size visible to the user is reported as the current size of the working set. runState provides the main life cycle control. The values are shown in the following table:

The runState changes over time, and the thread waiting in the awaitTermination() method will return when the state reaches TERMINATED. The state transition is:

Running - > shutdown may be implied in finalize() when shutdown() is called

Shutdown - > tidying when both queue and thread pool are empty

Stop - > tidying when the thread pool is empty

Tidying - > terminated when the terminate() method is completed

If developers need to handle the process pool when it changes to TIDYING state, they can overload the terminated() function. 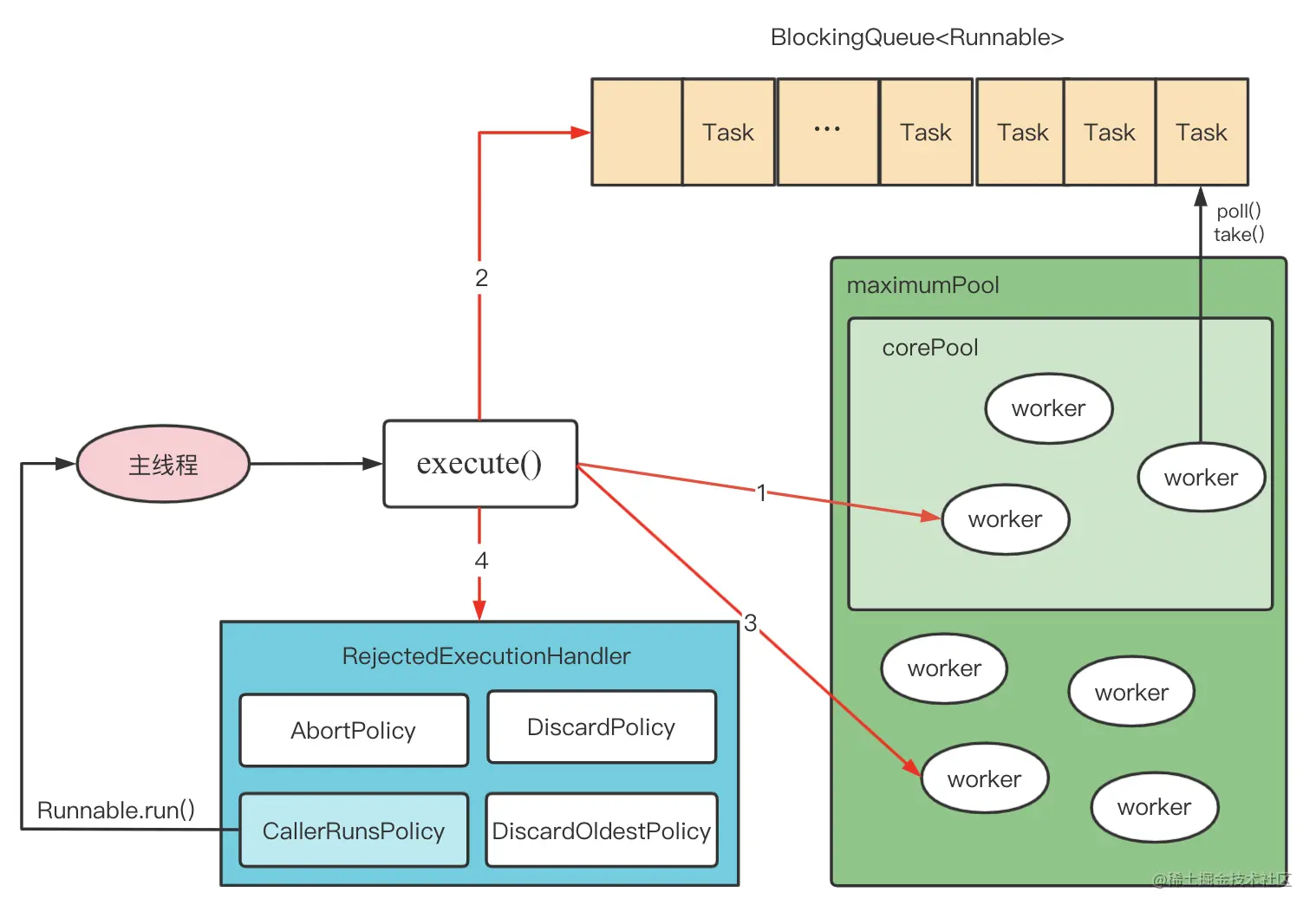 The thread pool ThreadPoolExecutor execution process is described in combination with the above figure. The task submitted to the thread pool using the execute() method can be executed in four scenarios:

(1) if the number of threads running in the thread pool is less than the corePoolSize, create a new thread to execute the task.

(2) the number of running threads in the thread pool shall not be less than corePoolSize, and the task shall be added to the blocking queue BlockingQueue.

(3) if the task cannot be added to the blocking queue (the queue is full), create a new thread to process the task (you need to obtain the global lock here).

When the thread pool creates a thread, it will encapsulate the thread into a Worker thread. After executing the task, the Worker will cycle to obtain the task in the work queue for execution.

2. Creation and use of thread pool

Runnabletask queue: used to save the blocking queue of tasks waiting to be executed. Generally, the following are selected:

ArrayBlockingQueue: an array based bounded blocking queue that sorts elements according to FIFO principles.

LinkedBlockingQueue: a blocking queue based on linked list, which sorts elements according to FIFO principles.

RejectedExecutionHandler (reject Policy): when the task queue and thread pool are full, it indicates that the thread pool is saturated, so the reject policy must be used to process the newly submitted task. There are four built-in rejection policies in JDK:

CallerRunsPolicy: uses the thread of the caller to execute the task

DiscardOldestPolicy: discards the latest task in the queue to execute the current task

You can implement the RejectedExecutionHandler interface and customize the processing policy according to the application scenario.

keepAliveTime: the time that the worker thread of the thread pool remains alive after it is idle.

ThreadFactory: you can set a meaningful name for the created thread through the thread factory.

Create a thread pool with a fixed number of threads

The above two methods of creating thread pools use the linked list blocking queue to store tasks. In the actual scenario, a large number of requests may accumulate, resulting in OOM

Two methods can be used to submit tasks to the thread pool: execute() and submit().

The submit() method is used to submit the task that needs the return value. The thread pool will return an object of type future. You can judge whether the task is executed successfully through the future object, and you can get the return value through the get() method of future. The get() method will block the current thread until the task is completed. Using the get (long timeout, timeunit) method will block the current thread and return immediately after a period of time. At this time, the task may not be completed.

(1) Simple assessment based on task type:

For purely computational tasks, multithreading does not bring performance improvement, because CPU processing capacity is a scarce resource. On the contrary, it leads to more thread switching costs. At this time, the recommended number of threads is the number of CPUs or + 1---- Why + 1? Because it can prevent one of the N threads from being interrupted or exited unexpectedly, the CPU will not wait idle.

(2) Ideal state assessment based on the number of tasks:

2) how to set * needs to be determined according to relevant values - tasks: the number of tasks per second, assumed to be 500~1000 - taskCost: the time spent on each task, assumed to be 0.1s - responsetime: the maximum response time allowed by the system, assumed to be 1s

The above are ideal values, which should be determined according to the performance of the machine. If the cpu load of the machine is full when the maximum number of threads is not reached, you need to upgrade the hardware and optimize the code to reduce taskCost.

It is forbidden to thread in business code!!!

When tasks need to be executed in the specified order (FIFO, LIFO, priority), it is recommended to create a thread pool using singleton.

This article mainly explains the execution principle and creation method of thread pool, as well as the recommended thread pool parameter settings and general usage scenarios. In development, developers need to reasonably create and use thread pools according to business to reduce resource consumption and improve response speed.