Sorting algorithm is one of the most basic algorithms in data structure and algorithm. Here are ten classic sorting algorithms to explain. Taoist friends who don't know can come here to sweep away their blindness. From "rookie tutorial". 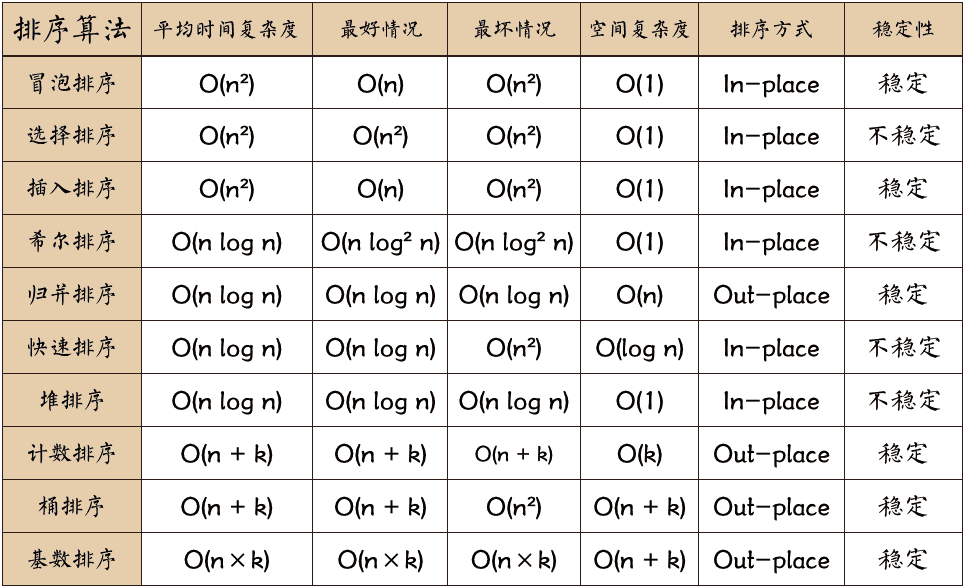 Bubble Sort is also a simple and intuitive sorting algorithm. It repeatedly visits the sequence to be sorted, compares two elements at a time, and exchanges them if they are in the wrong order. The work of visiting the sequence is repeated until there is no need to exchange, that is, the sequence has been sorted. The name of this algorithm comes from the fact that smaller elements will slowly "float" to the top of the sequence through exchange.
as one of the simplest sorting algorithms, bubble sorting gives me the same feeling as Abandon appears in the word book. It is the first place on the first page every time, so I am most familiar with it. Another optimization algorithm for bubble sorting is to set up a flag. When there is no exchange of elements in a sequence traversal, it proves that the sequence has been ordered. However, this improvement has little effect on improving performance.

selective sorting is a simple and intuitive sorting algorithm. No matter what data goes in, it is the time complexity of O(n2). So when using it, the smaller the data scale, the better. The only advantage may be that it doesn't take up extra memory space.

the code implementation of insertion sorting is not as simple and crude as bubble sorting and selection sorting, but its principle should be the easiest to understand. Insert sort is the simplest and most intuitive sort algorithm. Its working principle is to build an ordered sequence, scan the unordered data from back to front in the sorted sequence, find the corresponding position and insert. Like bubble sort, insertion sort also has an optimization algorithm called split half insertion.

Hill sort, also known as decreasing incremental sort algorithm, is a more efficient improved version of insertion sort. But Hill sorting is an unstable sorting algorithm. Hill sort is an improved method based on the following two properties of insertion sort:

The basic idea of Hill sort is: first divide the whole record sequence to be sorted into several subsequences for direct insertion sort. When the records in the whole sequence are "basically orderly", then directly insert sort all records in turn.

like selective sorting, the performance of merge sorting is not affected by the input data, but it performs much better than selective sorting, because it is always O(nlogn) time complexity. The cost is the need for additional memory space.

on average, n items should be sorted Ο (nlogn) comparisons. In the worst case, you need Ο (n2) times, but this situation is not common. In fact, quick sort is usually significantly better than others Ο (nlogn) algorithm is faster because its inner loop can be implemented efficiently on most architectures.
quick sort uses Divide and conquer strategy to divide a list into two sub lists. Quick sorting is a typical application of Divide and conquer in sorting algorithm. In essence, quick sort should be a recursive Divide and conquer method based on bubble sort. The name of quick sort is simple and rough, because as soon as you hear the name, you know the meaning of its existence, which is fast and efficient! It is one of the fastest sorting algorithms to process big data. Although the time complexity of Worst Case reaches O(n ²)， But others are excellent. In most cases, they perform better than the sorting algorithm with an average time complexity of O(n logn), but I don't know why.

Algorithmic art and informatics competition: the worst case of quick sorting is O(n ²)， For example, the fast arrangement of sequential sequence. However, the expected spreading time is O(nlogn), and the constant factor implicit in the O(nlogn) sign is very small, which is much smaller than the merging sort with stable complexity equal to O(nlogn). Therefore, for the vast majority of random sequences with weak order, quick sorting is always better than merge sorting.

3. java code example 1 (left and right pit filling each other)

Heap sort refers to a sort algorithm designed by using the data structure of heap. Heap is a structure similar to a complete binary tree, and satisfies the nature of heap at the same time: that is, the key value or index of a child node is always less than (or greater than) its parent node. Heap sort can be said to be a selective sort that uses the concept of heap to sort. There are two methods:

The average time complexity of heap sorting is Ο (nlogn).

the core of counting and sorting is to convert the input data values into keys and store them in the additional array space. As a sort with linear time complexity, count sort requires that the input data must be integers with a certain range** Features: * * when the input element is n integers between 0 and K, its running time is Θ (n + k). Counting sorting is not a comparative sorting, and the sorting speed is faster than any comparative sorting algorithm.
since the length of array C used for counting depends on the range of data in the array to be sorted (equal to the difference between the maximum and minimum values of the array to be sorted plus 1), counting sorting requires a lot of time and memory for arrays with large data range. For example, counting sorting is the best algorithm for sorting numbers between 0 and 100, but it is not suitable for sorting names alphabetically. However, counting sorting can be used in the algorithm of cardinality sorting to sort arrays with a large range of data.
generally speaking, for example, there are 10 people of different ages. According to the statistics, 8 people are younger than A, and A's age ranks ninth. Using this method, we can get the position of everyone else, which is in good order. Of course, special treatment is required when there are repetitions of age (to ensure stability), which is why the target array should be backfilled and the statistics of each number should be subtracted by 1.

Radix sorting is a non comparative integer sorting algorithm. Its principle is to cut integers into different numbers according to the number of digits, and then compare them respectively according to each number of digits. Since integers can also express strings (such as names or dates) and floating-point numbers in a specific format, cardinality sorting is not limited to integers.
**Cardinality sorting vs counting sorting vs bucket sorting: * * these three sorting algorithms all use the concept of bucket, but there are obvious differences in the use of bucket:

There are two methods of cardinality sorting:
most significant digital first method (MSD method for short): first sort and group the records according to k1, and the key codes k1 are equal in the same group, then sort each group according to k2 and divide them into subgroups, and then continue to sort and group the following key codes until the subgroups are sorted according to the lowest key code kd. Then connect the groups to get an ordered sequence.
least significant digital first method (LSD method for short): first sort from kd, then sort kd-1, repeat in turn, and get an ordered sequence after sorting k1.
the cardinality sorting of LSD is applicable to the sequence with small digits. If there are many digits, the efficiency of using MSD will be better. In contrast to LSD, MSD is allocated from the high-order number as the base, but it is not merged back into an array immediately after allocation. Instead, a "sub bucket" is established in each "bucket", and the value in each bucket is allocated to the "sub bucket" according to the value of the next digit. After the allocation of the lowest digits is completed, it will be merged into the array of receipt 1.